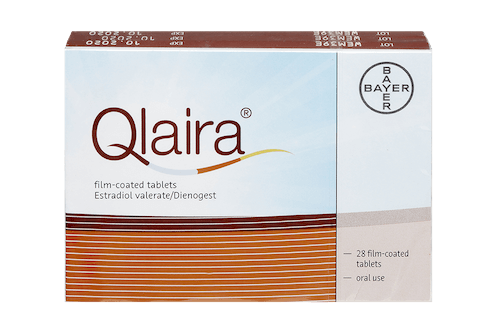 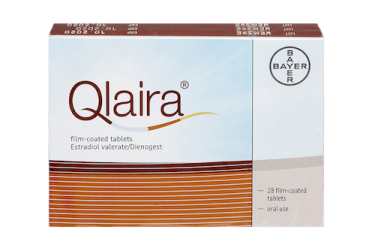 Qlaira is a combined hormonal contraceptive pill (CHC), also known as ‘the pill’, which is one of the most reliable methods of contraception. When used correctly it is up to 99.9% effective at preventing pregnancy.

Qlaira is also used for the treatment of heavy periods that are not related to another medical condition.

To order a repeat supply of Qlaira online, fill in our brief medical assessment. One of our online doctors will review your order and issue your prescription if appropriate. You can choose between delivery and in-store collection at your local Superdrug pharmacy.

✔ Approved by the MHRA

How does it work?

The hormones in the Qlaira pill help to prevent pregnancy in three ways:

How is it taken?

One pill is taken at the same time each day. You can swallow the pill with a drink of water.
Each pack comes with strips marked with the days of the week to help you to keep track of when you’ve taken your pill. There is also an arrow printed on the pack which you follow until you’ve taken all of the 28 tablets each month.
A period-type bleed (called a withdrawal bleed) will occur as you reach the end of the packet. It may not finish before you start on the next pack, but don’t take a break between packs. Start on the next one the day after you take the final white tablet of the previous pack.
Use correctly, Qlaira will protect you against pregnancy even while you are taking the two white inactive tablets.
If you have not used a hormonal contraceptive in the month before starting Qlaira, you should start taking Qlaira on the first day of your period.
If you are changing contraceptive pill from a combined pill to taking Qlaira, then you should start taking it the day after you take the last active tablet in your previous pack of pills.
If you are switching from a combined contraceptive vaginal ring, contraceptive implant, or patch, you can begin taking Qlaira on the same day as these are removed.
If you have been taking the mini-pill (a progestogen-only pill), you can switch to Qlaira at any time. If you have had a contraceptive injection then you can start taking Qlaira when the next one is due. In all these cases, you should use an additional barrier method of contraception for the first nine days of taking Qlaira to ensure that you are protected against pregnancy.
If you forget to take Qlaira
If you forget to take an active tablet one day but remember within 12 hours, take it as soon as you remember then carry on taking them as normal. If you forget to take a pill for more than 12 hours then you may be at risk of getting pregnant if you have sex. It is advisable to use a barrier form of contraception such as a condom to stay protected against pregnancy.
If you forget to take one of the inactive white tablets, don’t worry. Throw that pill away and continue with the next tablet at the usual time.
Do not take two active tablets in one day.
If you forget to take more than one pill, speak to your doctor. Depending on where in your cycle you were when you forget to take them, you might be pregnant. Your doctor can advise you on what to do if you miss more than one pill.
If you are sick or have diarrhoea three or four hours after taking an active pill, take the next pill as soon as you can. The active ingredients may not have had sufficient time to be absorbed into the body so you could be at risk of pregnancy if you don’t take another pill within 12 hours.
Who should not take Qlaira?
Your doctor may advise you not to take Qlaira in certain circumstances. Qlaira carries a small risk of causing blood clots in those who take this pill compared to those who don’t. Rarely, blood clots in veins or arteries can cause blockages that can be very serious or fatal.
Do not take Qlaira:
if you currently have or have had a blood clot in a blood vessel of your legs (also known as deep vein thrombosis or DVT)
Tell your doctor if any of the above apply to you.

Qlaira contains the active substances estradiol valerate, or estradiol valerate combined with dienogest.
Each pack of 28 tablets contains 26 active tablets in four different colours, and two white inactive tablets.
Other ingredients in both the active and the inactive tablets include lactose monohydrate, povidone, maize starch, and magnesium stearate.
Qlaira contains lactose monohydrate - if you have ever been diagnosed with an intolerance to some sugars you should talk to your doctor before taking this pill.