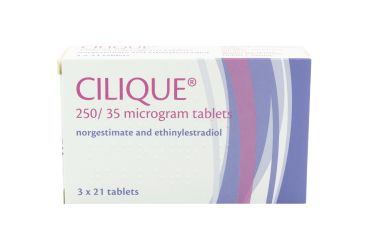 Cilique is a combined pill taken by women for contraception. It comes in a strip of 21 pills, you take a pill every day for 21 days and then have a pill free break for 7 days.

Cilique contains the same active ingredients as a well-known combined pill called Cilest – norgestimate and ethinyl estradiol. Because of this, both Cilest and Cilique are the same in terms of the way they work and side effects they cause. If you want to switch from Cilest to Cilique, then you should finish your 21 day pill pack with Cilest before starting Cilique straight afterwards.

In a hurry? Choose Click and Collect and pick up your order after just 3 hours from a Superdrug Pharmacy.

Cilique is a type of combined pill, It’s suitable for most women, but you shouldn’t take it if you’re pregnant. Other reasons you might not be able to use Cilique are if you:

You should make sure you read the complete list of warnings on the patient leaflet that came with the medication. It’s important that you inform your doctor of any previous illnesses or current conditions affecting your health.

Placing an order for Cilique at Superdrug Online Doctor is a simple and convenient process. You just need to take the following steps:

How do you use Cilique?

Take Cilique every day for 21 days:

Have seven pill-free days. After you’ve taken all 21 pills in the strip, you have seven days when you have a break from taking pills

Start your next strip of pills:

How are Cilique and Cilest related?

Both Cilest and Cilique are combined pills, which contain the same active ingredients – ethinyl estradiol and norgestimate. Cilest is better known than Cilique, but both of these medications are chemically the same and they:

Cilique and Cilest are also different in a few ways:

How do you switch from Cilest to Cilique?

Cilest and Cilique contain the same active ingredients – ethinyl estradiol and norgestimate. This makes them chemically identical and means that you could technically use them in place of each other, without reducing your contraceptive protection or causing yourself any harm.

Normally, you could start taking Cilique the next day after having taken the last active tablet of your previous pack of contraceptive pills but no later than the day after your normal pill-free week, i.e. right after the end of you current pack of Cilest. So, if you want to switch from Cilest to Cilique, we recommend you first finish your pack of Cilest completely.

At Superdrug Online Doctor, if you want to switch to Cilique while you’re on Cilest, then it’s very simple to place an order. Because the two medications have the same active ingredients, the process is just like if you want to reorder Cilest.

Like all medications, Cilique can cause side effects. Even though not everyone experiences these, it’s a good idea for you to take the time to read the patient leaflet that comes with Cilique and become familiar with them. If you’re unsure about anything you’ve read, you should talk to your doctor.

Some of the very common side effects are:

Some of the common side effects are: