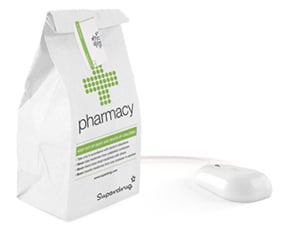 from
Evra patches are a highly effective (up to 99%) type of contraception available on prescription in the UK.

Some people prefer to use weekly patches for their contraception, rather than remember to take a daily tablet.
You can buy Evra patches from Superdrug Online Doctor. Simply fill out a short, online questionnaire and one of our doctors will review your order.

What are Evra Patches?

Evra is the brand name for the contraceptive patch in the UK. It is a small patch which, once applied to the skin, releases hormones into your body which stop you from getting pregnant. Evra patches contain both oestrogen and progestogen, meaning it is a combined hormonal contraceptive.

How do Evra patches work?

The Evra patch works in a similar way to the contraceptive pill. But instead of being swallowed, it’s worn on the skin as a patch. The patch releases hormones into the body which stop you from getting pregnant. Each patch lasts for a week and must be changed on a weekly basis before having a week off without a patch. Like the combined pill, Evra patches contain both oestrogen and progestogen, and they prevent pregnancy by:

How long does it take for Evra to work?

How effective is Evra?

If used correctly, the Evra patch is more than 99% effective at stopping pregnancy.

How to use Evra patches

Where should I apply the patch?

You can usually have a shower, bath, or swim without the Evra patch coming off.

How long can I use Evra patches for?

You can wear a single Evra patch for a maximum of 7 days before needing to change it for a fresh one on the 8th day. You usually do this for 3 consecutive weeks, and then would have a week off where you do not wear a patch. During your week off you may have a withdrawal bleed, which is similar to a period. After 7 days without a patch you can start the 4 week cycle again, even if you are still bleeding.

Alternatively, you can use Evra patches in extended regimes, including continuously to delay your period.

What happens if my patch comes off?

Evra patches are very sticky, and should stay on even after being submerged in water. If your patch does fall off, what you should do next depends on how long it has been off.

If your patch fell off less than 48 hours ago, you should:

You are protected from pregnancy if you have used your patch correctly for the past 7 days, and the 7 days before your week off if you are in week 1.

If your patch fell off more than 48 hours ago, or you don’t know how long it has been, you should:

Where can I get Evra patches?

Can I buy Evra patches online?

Evra patches are available online via Superdrug Online Doctor. Simply fill out a short, online questionnaire, and our doctors will review your order to make sure Evra patches are right for you. Your treatment can then be delivered to your home address, or collected from your local Superdrug pharmacy.

Can I get Evra over the counter?

No. Evra patches are a prescription medication which means a doctor needs to have prescribed it to you. You can get a prescription online from Superdrug Online Doctor.

Can I get Evra on the NHS?

Yes. Evra may be available on the NHS depending on your local guidelines. You will need to make a face-to-face appointment with your GP or visit an NHS sexual health clinic.

You may experience some side effects when using Evra patches.

Common side effects include:

Uncommon or rare side effects include: A full list of all known Evra side effects can be found in the patient information leaflet supplied with your medicine.

You may experience side effects from taking Evra, but they will normally improve or completely go away within the first 3 months. If the side effects do not go away, or you are concerned about them, you can speak to your doctor about finding a more suitable method of contraception for you.

Are Evra patches right for me?

Evra patches may not be right for everyone. Certain conditions or medications can interact with Evra and make it less effective, or potentially unsafe.

You may not be able to use Evra if you are:

You may also not be able to use Evra if you have or have had:

There are several alternative forms of contraception you may choose to use, including:


If you are unsure which form of contraception is right for you, speak to your doctor and they will help advise you.

We can provide you with a contraceptive consultation service for just £5. Here, you’ll complete a short medical questionnaire and one of our doctors will recommend the most suitable contraceptive for you.