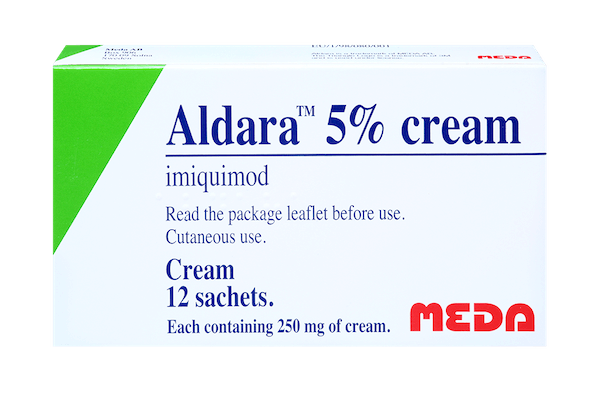 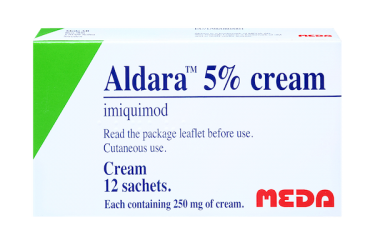 Aldara is prescription-only cream used to treat genital warts. It is an effective treatment that starts working straight away and 50% of people find it gets rid of their warts entirely within 4-12 weeks of use. You can get a prescription and Aldara cream from Superdrug Online Doctor quickly and easily.

Due to exceptionally high demand this product currently isn’t in stock, but we can offer alternative treatments.


Prices include prescription and standard delivery.

Aldara is a skin cream used to treat genital warts. It contains the active ingredient, imiquimod. It is also prescribed for some particular types of skin cancer. Although it is not a cure for genital warts, Aldara cream helps to treat them.

Aldara is a brand name of imiquimod. There are generic alternatives available, these are the same as the branded version but cheaper. The cream is usually applied 3 times per week until the warts have completely disappeared, for a maximum of 16 weeks.

How does Aldara work?

Aldara cream works by helping your body’s immune system to produce natural substances to fight the virus that causes genital warts. Genital warts are caused by the human papillomavirus (HPV).
HPV is not just one virus, it is a group of viruses. In most people, they do not cause any symptoms, but some types like type 6 and 11 can cause genital warts. Genital warts are a sexually transmitted infection (STI) but are mostly harmless. Unlike some other STIs, there is no evidence to suggest that genital warts cause fertility issues.
Genital warts can be itchy and sore but rarely cause any pain. They can cause anxiety and a loss of confidence due to their appearance. Aldara helps to destroy both hard and soft genital warts, by being applied directly to the affected area and stimulating the immune system to get rid of them.

How long does it take for Aldara to work?

Most people who use Aldara cream find their genital warts disappear within 12 weeks, but some people find their warts clear in as little as 4 weeks. You should not use Aldara for longer than 16 weeks per episode of genital warts. If your warts are not disappearing with Aldara, especially if you have used it for the maximum amount of time, you should talk to a doctor.
In one study, the average (median) time for women who used Aldara cream to clear their warts was 8 weeks, and for men it was 12 weeks. You should continue to use Aldara until all your warts have disappeared, but for no longer than 16 weeks.

How effective is Aldara?

Aldara is a very effective treatment for getting rid of genital warts with one study showing that over 50% of people who used 5% imiquimod cream saw all their warts disappear with the treatment. This was compared to 21% of those who used 1% imiquimod cream and 11% who used vehicle cream (a cream with no medicine in it). The study also showed that 13% of patients who received the 5% imiquimod cream had a recurrence of at least 1 wart.

How to use Aldara?

Aldara cream should be applied according to your doctor’s instructions. It is applied in the evening just before going to bed.

How to apply Aldara

Before applying Aldara cream, you should wash your hands with warm soapy water and dry them thoroughly. Open a new sachet of cream every time you apply it and dispose of it in the bin even if there is some cream left. You should not save the open sachet for later use.
To apply Aldara cream:
Do not apply bandages or dressings to the affected area.

How often should I apply Aldara?

Aldara cream is applied 3 times per week with a 1 day break in between. For example, Monday, Wednesday, and Friday.

How long do I use Aldara for?

You should continue to apply Aldara cream until all your warts have completely disappeared, but for no longer than 16 weeks.

Where can I get Aldara?

You will need a prescription to get Aldara cream to treat genital warts. If you have a prescription from a doctor, you can get Aldara from most pharmacies. You can obtain a prescription by attending the GP surgery you are registered with or from online services like Superdrug Online Doctor.

Can I get Aldara on the NHS?

You may be able to get Aldara cream on the NHS, but you will need an appointment with a doctor who will also want to have a look at the affected area.

Can I buy Aldara online?

Yes, you can get a prescription and Aldara cream from Superdrug Online Doctor.
The process is quick and easy:

Can I get Aldara over the counter?

What to do if you get Aldara side effects

If you have any side effects while using Aldara cream, then you should speak to your doctor or pharmacist.
If you have severe side effects, then you should seek medical help straight away. You should also consult your doctor if you have side effects that are not listed in the patient information leaflet.
If you have discomfort or irritation while using Aldara cream, wash it off and try using it again later when the irritation has calmed.
Imiquimod can be used on warts on the genitals and around the anus. It should not be used to treat warts that are inside the anus, vagina, or the urethra (the tube that passes urine). If you are using the cream near your foreskin, you should follow the additional instructions in the leaflet for this area (which are?). To avoid getting the cream in your eyes, nostrils, mouth, or on the lips, always wash your hands thoroughly after using Aldara.

Is Aldara right for me?

There is no complete cure for genital warts, so there is a high risk that they will come back. There are alternative genital wart treatments available that Superdrug Online Doctor can provide. They include Condyline and Warticon.
Condyline is a solution that can be used on small, soft warts to stop the growth and spread of genital warts. It contains the active ingredient, podophyllotoxin, a plant extract. Condyline should only be applied to the warts and not on healthy skin.
Warticon is a topical cream which is used for the treatment of anogenital warts. It’s used on small, soft warts and contains the same active ingredient as Condyline. Warticon cream stops the growth and spread of warts as well as helping to make them disappear.
Alternatively, you can choose to have no treatment at all. One third of genital warts will go away on their own within 6 months, however the implications of this include multiplying or spreading them to sexual partners. There are also alternative medical interventions such as having warts frozen, cut, or electronically burnt off.