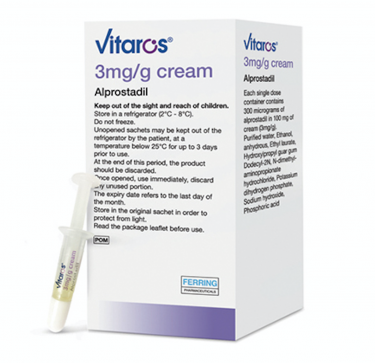 from
Vitaros is a cream used to treat erectile dysfunction (ED). It works by relaxing your blood vessels so more blood flows to your penis making it harder for longer.

What is Vitaros (alprostadil) cream?

Vitaros cream is a medication that is used to treat erectile dysfunction by making it easier for you to get an erection. Vitaros cream contains the active ingredient alprostadil.

Vitaros cream is applied directly into the opening of your penis (the urethra) using a syringe-like device called an applicator.

An applicator is included if you order Vitaros cream with Superdrug Online Doctor.

Alprostadil comes from a family of medicines called prostaglandins. These medicines relax the blood vessels in your body causing them to widen, allowing more blood to flow.

You can use alprostadil cream to treat erectile dysfunction by applying it directly to your penis. As your blood flow increases with the help of the cream, you may find your erectile tissue to become firm which results in an erection.

How do you use Vitaros cream?

Vitaros comes in an applicator, a tube of cream, which contains enough cream for one use. Vitaros should be stored in the fridge as it can only be kept at room temperature for up to 3 days.

To use Vitaros cream you must:

Vitaros should start working within 30 minutes of applying it, but for some people, Vitaros cream works within 5 minutes. The effects normally last for 1 to 2 hours.

We recommend that you pass urine before using Vitaros. You should avoid passing urine immediately after using the cream as it may come out before it has enough time to work.

Vitaros won’t normally give you an erection unless you’re aroused.

If you find you still don’t get and keep an erection hard enough for sex with Vitaros cream, your doctor might be able to increase your dose.

If your partner is pregnant, try to avoid getting any Vitaros cream on them. To do this, we recommend that you have sex using a condom after you’ve applied the cream.

Can you inject alprostadil?

You can’t inject Vitaros cream, but there is an alprostadil injection that you can get prescribed.

Where can I buy Vitaros (Alprostadil) cream?

You can buy Vitaros through our Online Doctor service.

You can’t get Vitaros through your NHS GP. GPs can prescribe tablets for ED, but they can’t prescribe creams, injections or devices.

As Vitaros cream is applied directly to the penis, the side effects often mostly affect your penis and your partner’s genitals.

The most common side effects are:

Side effects should improve after 1 to 2 hours.

If you get side effects, you should speak to a doctor.

Your doctor might be able to reduce your dose of Vitaros to see whether your side effects get better. There are other treatments available if you get side effects with Vitaros such as:

Stop using Vitaros cream and call your doctor at once if you have:

Get emergency medical help if you have signs of an allergic reaction: hives; difficult breathing; swelling of your face, lips, tongue, or throat.

We recommend that you look at a few different websites for reviews of Vitaros cream. This way, you get reviews from people of different ages and backgrounds.

We recommend these review sites: