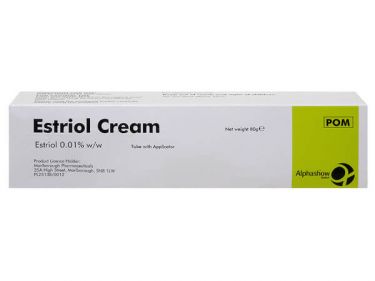 Estriol cream is an effective type of hormone replacement therapy that contains only oestrogen. Estriol cream relieves common symptoms of menopause such as vaginal itching, dryness and irritation. When applied daily, Estriol cream can provide relief from symptoms in just 3 weeks.

What is Estriol Cream?

Estriol cream is a treatment that is used for managing vaginal symptoms of menopause. The active ingredient in Estriol cream is Estriol, which is a form of oestrogen that the body produces naturally during pregnancy. It can be used alone to treat symptoms such as atrophic vaginitis (thinning of the vaginal wall leading to irritation) or alongside other HRT for those that also experience symptoms in other areas of the body.

How does Estriol Cream work?

Estriol cream is a hormone-based treatment that works by supplying oestrogen directly to your vaginal tissues.

In the period leading up to menopause, we start to produce less oestrogen. This can cause an effect on the lining of the vagina, leading to uncomfortable symptoms. Low levels of oestrogen can cause vaginal dryness, itching or inflammation, which can lead to painful or uncomfortable sex and increases your risk of getting urinary or vaginal infections.

If you are experiencing such vaginal problems, your dosage will usually consist of one applicatorful of cream every night. As your symptoms improve, this will be reduced to twice a week.

How long does it take for Estriol Cream to work?

It usually takes 3-6 weeks of applying estriol cream before  noticing the full effects of the medication.

How effective is Estriol Cream?

National guidelines recommend that low-dose vaginal oestrogen such as Estriol cream is the first choice of treatment for symptoms affecting the vagina, as these preparations can effectively control such symptoms. Symptoms can be controlled long term with Estriol cream as you can continue to use it for as long as you need, provided you have yearly check ups with your doctor.  There is usually no need to stop treatment and symptoms tend to return if you do.

How to use Estriol Cream

To use Estriol cream, you will use an applicator that will help you insert the correct amount of Estriol cream into your vagina. Make sure you carefully follow the instructions provided with your cream to do this correctly.

This should be done daily for 2-3 weeks at night time before bed, before reducing to twice weekly once your symptoms improve. You can use Estriol cream for as long as you need. In most cases, symptoms will return when you stop using the cream.

Where can I buy Estriol Cream online?

You can conveniently buy Estriol cream from most online UK registered pharmacies like Superdrug Online Doctor. This cream requires a prescription to purchase online or at a pharmacy.

Can I buy Estriol Cream online?

You can buy Estriol cream online from UK registered pharmacies, like Superdrug Online Doctor. To order the cream, you will have to complete a short and simple medical form so our doctors can review it and make sure that it is the right treatment for you. If they think it is, they will prescribe the medication and we can deliver it to your door.

Can I get Estriol Cream over the counter?

Estriol cream is a prescription-only medicine so it is not available over the counter. This is because Estriol cream contains oestrogen which may not be suitable for everyone and can cause certain side effects. This means a doctor needs to review the suitability of this medication for you before they can prescribe it.

Can I get Estriol Cream on the NHS?

The cream is absorbed into the bloodstream in low amounts, so it does not have the same risks as using other hormone replacement therapy treatments, such as pills or patches.

Like all medicines, Estriol Cream can cause side effects, although not everybody gets them. Common side effects of using the cream include:
The side effects listed below are less common but may be a sign that you require urgent medical treatment. Stop using Estriol Cream and tell your doctor straight away if you notice or suspect any of the following:
The full list of side effects will be provided in the patient information leaflet included with your medication.

Is Estriol Cream right for me?

The ingredients of Estriol cream means that it may not work for everyone. This may be due to having a certain health condition or taking medications that could interact with Estriol cream, which can reduce its effectiveness or make it unsafe to use.

Estriol is absorbed into the bloodstream through the vagina in low amounts, so the chances of it interacting with other medications you are taking are low. However, if you use other vaginal medications, like creams or pessaries for thrush and other infections, your doctor may recommend that you avoid using Estriol cream until you finish your treatment. There is also potential for Estriol cream to reduce the effects of Lamotrigine, a medication used in epilepsy. It is important to always tell your doctor which medications you are using.

You can use lubricants and moisturisers alongside Estriol cream. Estriol cream can damage diaphragms and condoms, reducing their effectiveness against STIs or pregnancy.

If Estriol cream doesn’t work for you, there are a few alternative hormone replacement therapies that you can consider. Other vaginal creams or tablets containing hormones can help with vaginal symptoms, whilst patches or tablets will also help other symptoms such as hot flushes. You can discuss this with your doctor to find the best option for you.

If Estriol cream is not an option for you, here are some alternative medications you may want to consider:

What’s the difference between Vagifem and Estriol Cream?

Vagifem is a common and popular alternative to Estriol cream. One of the differences between the two medications is that Vagifem comes in the form of a vaginal tablet, whereas Estriol cream exists as a cream. While vaginal creams usually have fewer side effects than tablets, the results from using tablets are usually more noticeable and faster than using cream. Vagifem contains estradiol, which is a stronger form of oestrogen compared to estriol that is found in Estriol cream.

Both are inserted directly into the vagina using an applicator and both are used to relieve menopausal symptoms, like vaginal dryness, itchiness and irritation. If you are unsure about which product would work best for you, then you should speak to your doctor.