For millions of people around the world, 2020 has created a global concern and a very human reaction to that threat. The COVID-19 pandemic has impacted virtually every corner of the world, and fear, worry, and stress are all natural reactions to the tremendous amount of uncertainty triggered by the virus and its spread.

Unfortunately, another symptom of the stress and worry caused by COVID-19 can be shock hair loss. While there may be no pain or itching, the sudden surge of stress can impact sleep, diet, and overall physical health, leading to unexpected hair loss.

If you’re one of the many people attempting to navigate their love lives in the midst of a global pandemic and copious amounts of stress and anxiety, hair loss is possibly the last thing you want to add to your plate.

But how many people really care about hair loss (of any kind), and will it hurt your chances of scoring a date (digital or otherwise)? To find out, we surveyed over 1,000 men and women from the UK and the U.S. to find out what they really think about hair loss. Read on as we explore how many people experience hair loss, how it’s impacted their love lives and online dating opportunities, and how many people consider baldness a sexy trait.

Hair loss comes in multiple shapes and sizes and can be caused by any number of factors ranging from genetics to environment and exposure. Among those surveyed, 13% personally indicated experiencing hair loss. 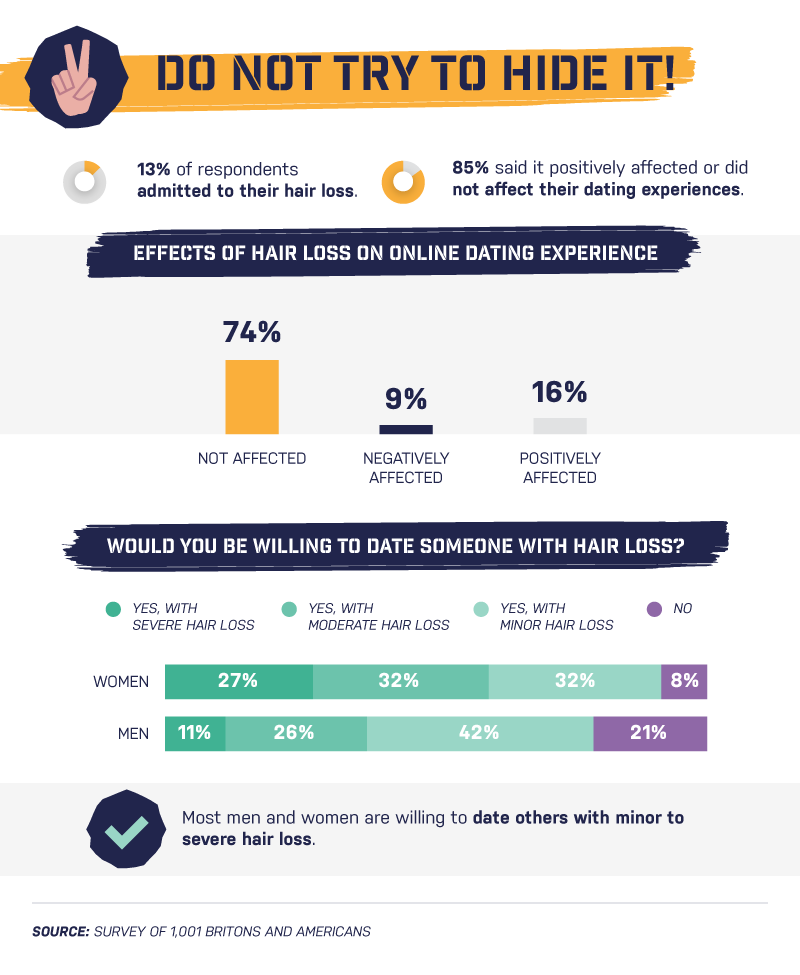 And while living with hair loss can be an emotional experience, it may not have the profound impact on your love life that you might expect. 85% of people with hair loss said it either positively impacted their dating experiences or didn’t impact them at all. Combined, just 9% of people reported a negative dating experience directly tied to their hair loss. This positive or non-reaction might be due to the high number of people who reported they’d be willing to date someone with minor to severe hair loss.

Online dating is already difficult enough, and adding hair loss to the equation can make it more challenging for some. You might be surprised to find that roughly 1 in 3 photos used in online dating profiles are inaccurate, which is an intentional decision by some people dealing with hair loss. 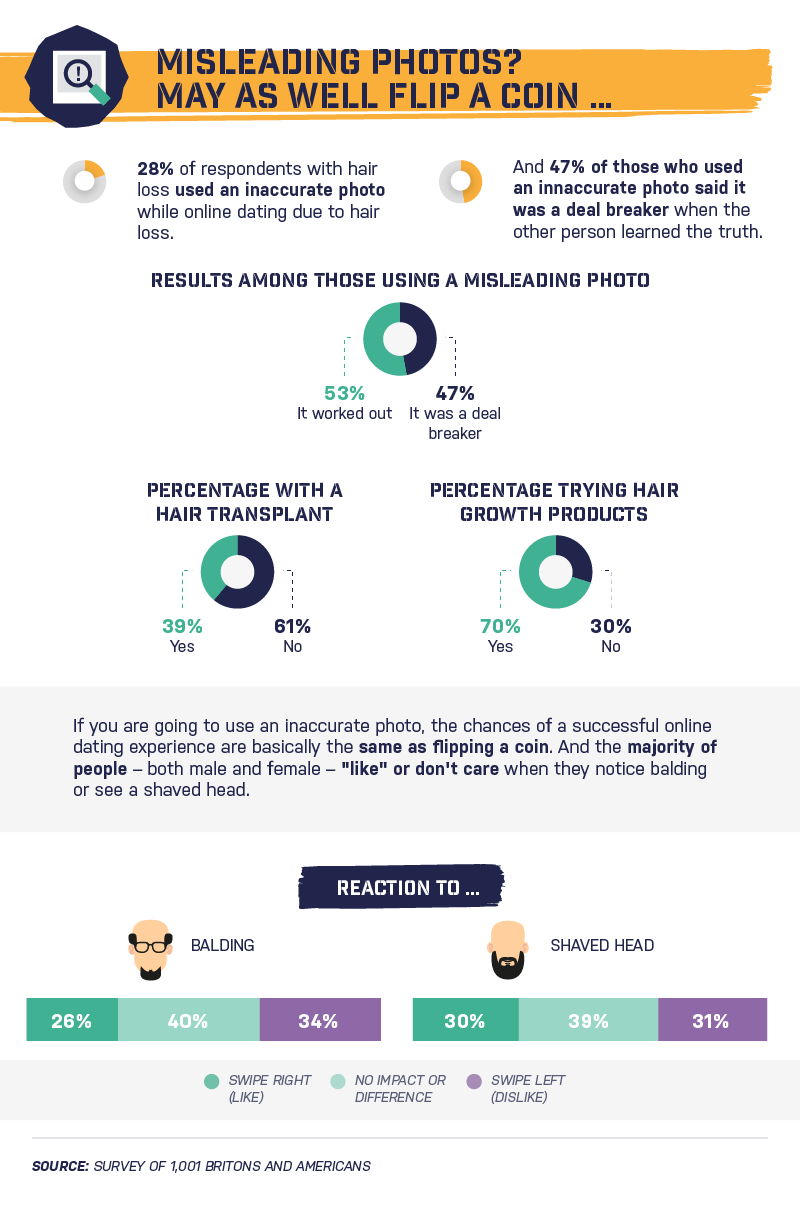 28% of people with hair loss admitted to using an inaccurate or misleading photo while online dating. On the other side of that decision, 47% of respondents acknowledged the deception was a deal breaker after the truth came out.

So what are people experiencing hair loss doing about it? 70% of respondents admitted to using hair products to combat hair loss, and 39% reported having had a hair transplant because of it.

On average, men (53%) were more likely than women (43%) to express that looks were either extremely or very important to them when dating. And while that may seem like a high percentage, people were more likely to treat four other characteristics as being more important: personality (81%), sexual chemistry (66%), health (64%), and location (55%). 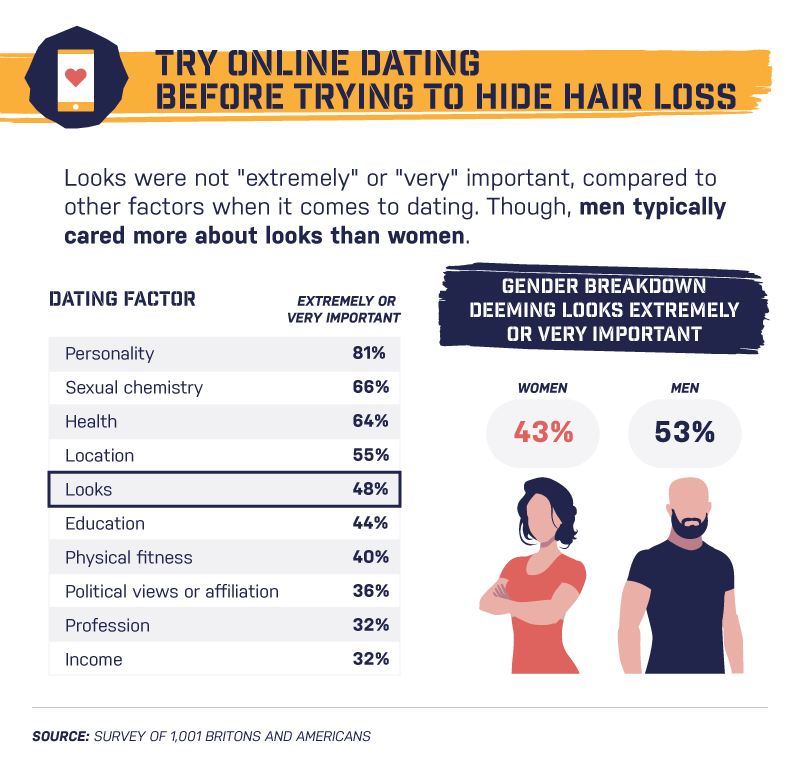 Physical attraction may be one of the most important aspects of a successful relationship, but that attraction is so much more than skin deep. Beyond physical appearance, authenticity, integrity, confidence, and mood are other important foundations to how attracted we are (or aren’t) to someone.

Dating may have changed over the last several decades, but the attitudes men and women have towards hair loss have stayed relatively the same. We found just 10% of millennial women were unwilling to date someone with hair loss, and 10% of Generation X women said the same. In contrast, 90% of women born between 1965 and 1997 had this sentiment: Hair loss doesn’t really matter. 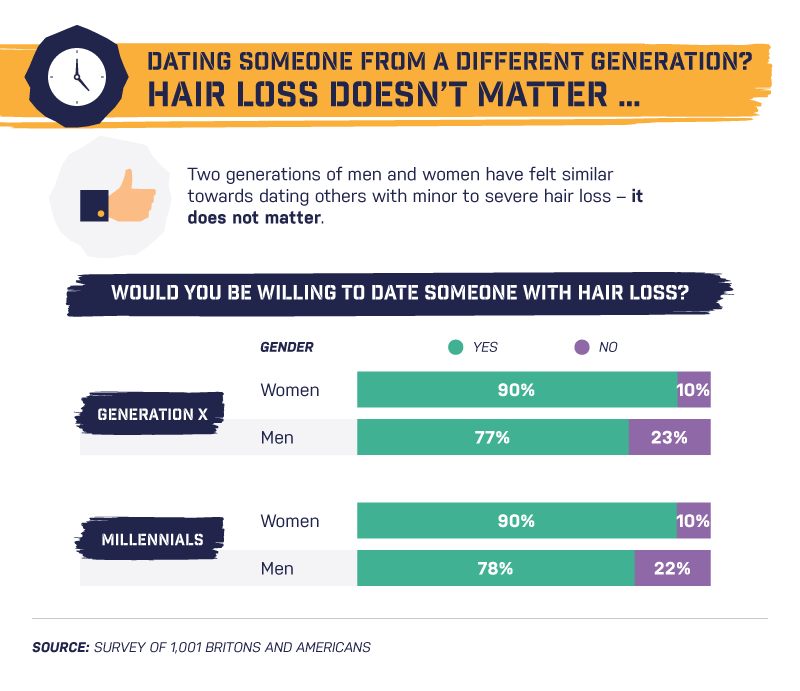 Where Bald Is Sexy

What do Dwayne “The Rock” Johnson, Jason Statham, Vin Diesel, Tyrese Gibson, and Bruce Willis all have in common? Beyond their fair share of acting credits in movies about fast cars, each of them is considered among the hottest bald men in Hollywood. Considering Dwayne Johnson is worth an estimated $320 million, his lack of locks has clearly done nothing to hold him back. 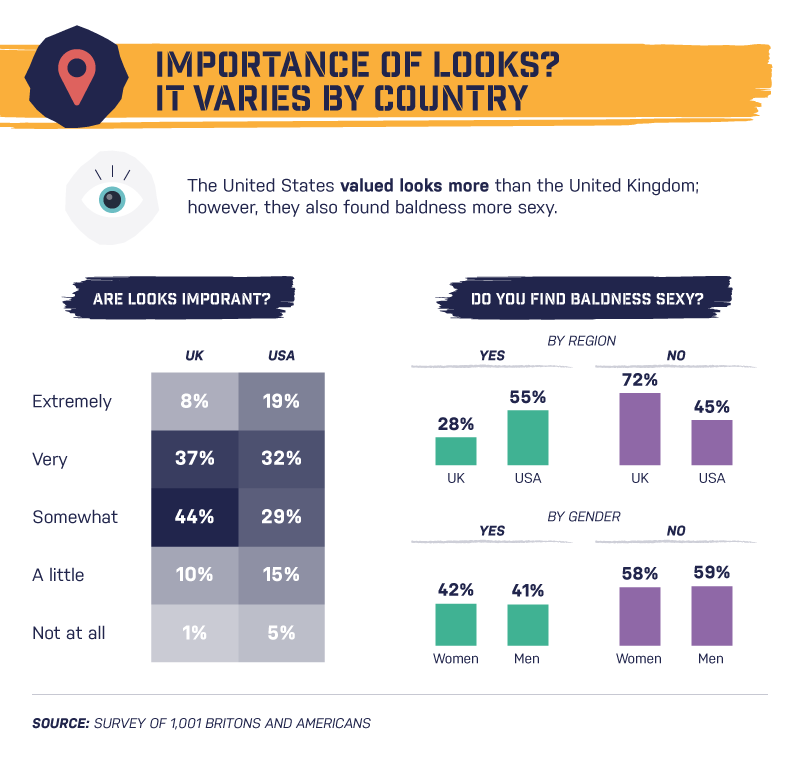 More common across the pond, we found 55% of Americans were willing to acknowledge that bald is sexy, compared to 28% of people from the U.K. Barren hair follicles were voted as nearly equally as sexy among women (42%) and men (41%). People from the U.S. were also more likely to rank looks as being extremely important (19%) while dating, while those from the UK were often more likely to consider looks either very or somewhat important instead.

Standards of beauty and looks have evolved over time, and going bald doesn’t have to come with any negative stigmas, no matter what gender you are. In the end, we found it was better not to lie about your appearance. In fact, personality, sexual chemistry, and your overall health matter more to people when dating than your looks. So, be confident and embrace who you are.

But, of course, if you are concerned about your own hair loss, be sure to check out Superdrug Online Doctor for all your hair loss treatment needs to help you feel like your best self.

The data we are presenting rely on self-report. There are many issues with self-reported data. These issues include, but are not limited to, the following: selective memory, telescoping, attribution, and exaggeration. No statistical testing was performed, so the claims listed above are based on means alone. As such, this content is purely exploratory, and future research should approach this topic in a more rigorous way.

Whether you have a full head of hair or not, we’d love you to share this content for noncommercial purposes. Just make sure to link back to this page so that the authors can get full credit, and readers can explore the full study.