Read on for the full report on women's perspectives on ED

Erectile dysfunction is a common condition that affects men everywhere – but it also affects their partners. In fact, people whose partners struggle with erectile dysfunction or ED (defined as the inability to achieve or maintain an erection to the desired level) may feel hurt, rejected, or suspicious – and some may even blame themselves for the situation.

We wanted to spark honest dialogue about this difficult subject, as well as to understand how ED affects women in relationships with ED sufferers, so we asked 1,000 men and 1,000 women in the U.K. to share their ED-related experiences via a survey. How do women feel when their partners suffer from erectile dysfunction? How do they broach the subject with their partners? And, most important, what helps them navigate this challenging issue in their relationship? See what our male and female respondents had to say on the subject. 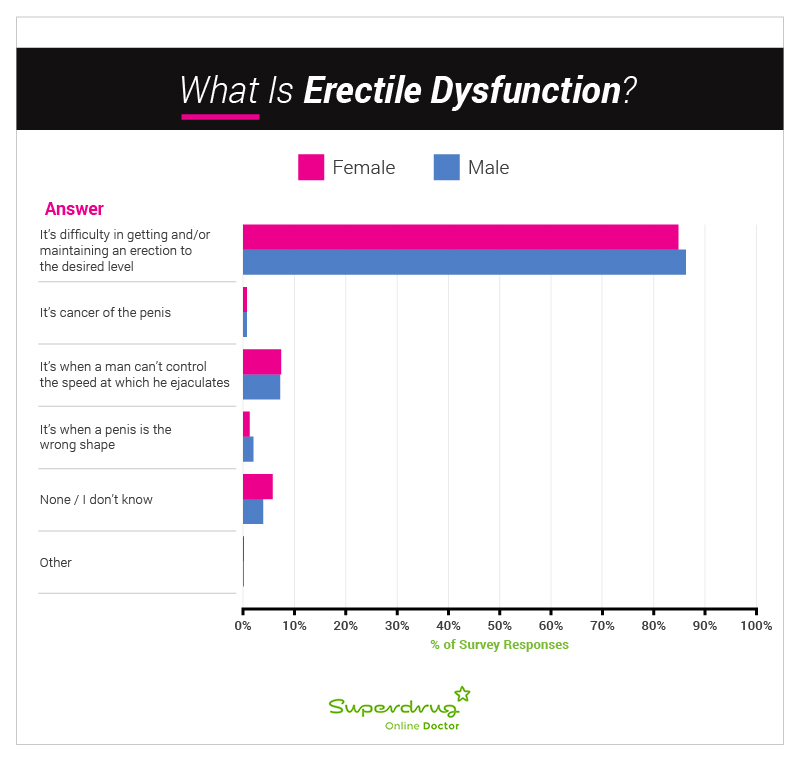 To better gauge our survey participants’ understanding of erectile dysfunction, we asked them to define the term. More than 86% of men and women correctly pinpointed the condition as difficulty in getting and/or maintaining an erection to the desired level. Around 7% incorrectly believed erectile dysfunction means that a man can’t control the speed at which he ejaculates, while almost 6% of women and nearly 4% of men said they didn’t know. 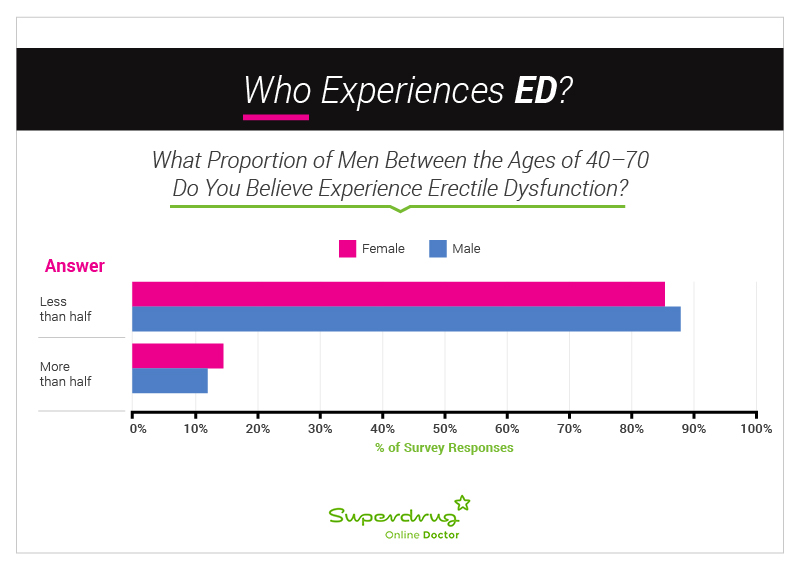 Couples who struggle with erectile dysfunction are far from alone. We asked survey respondents to estimate the percentage of men aged 40 to 70 who experience ED. Surprisingly, the vast majority – 88% of men and 85% of women – underestimated the percentage of men who suffer from ED. The truth? Studies show that ED affects more than half of men, and while the risk can increase with age, it is increasingly recognised that young men may also suffer from it. Less than 15% of women and 12% of men correctly identified how common ED really is. 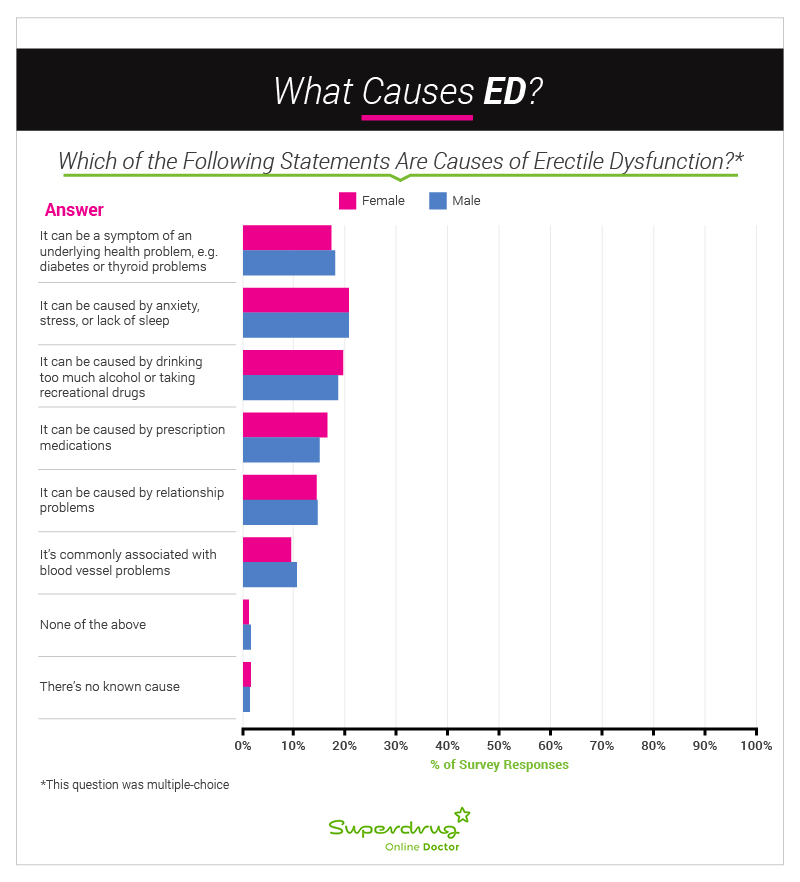 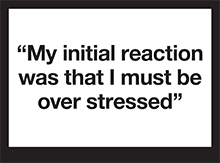 As with any health condition, the first question that many people affected by erectile dysfunction ask is a simple one: why? In a multiple-choice question, we asked survey participants to identify factors they believe contribute to ED. Anxiety/stress/lack of sleep takes first place, followed by alcohol and drug use and the belief that ED signals an underlying health problem.

In reality, all conditions listed on the survey can cause ED. Erectile dysfunction can stem from many physical and/or psychological causes – from cardiovascular disease to depression. To make matters more confusing, ED can be a self-fulfilling prophecy, as anxiety about getting an erection can prevent men from getting one.

“We got stressed from trying to do things that wouldn’t happen, or doing things and then having to stop part way through,” one woman wrote in our survey. 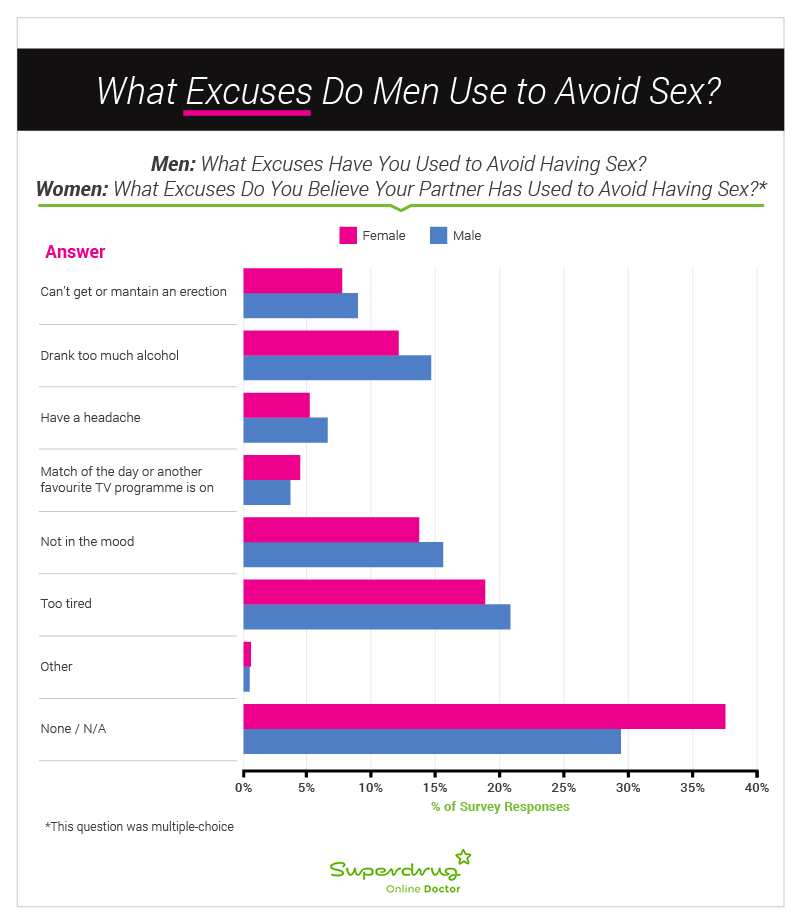 For men struggling with erectile dysfunction, pressure to perform can be stressful – so it makes sense that some might come up with excuses to avoid sex. We asked women to identify excuses they thought their partners had used – and asked men to come clean about which reasons they provided. Almost 19% of women believe their partner has claimed to be too tired for sex, nearly 14% think he’s used the standby “not in the mood” excuse, and about 12% think he said he had drunk too much. Which excuses did men say they used? Interestingly, their top three answers mirrored the women’s responses: Nearly 21% have said they were too tired, almost 16% said they weren’t in the mood, and almost 15% cited alcohol consumption. 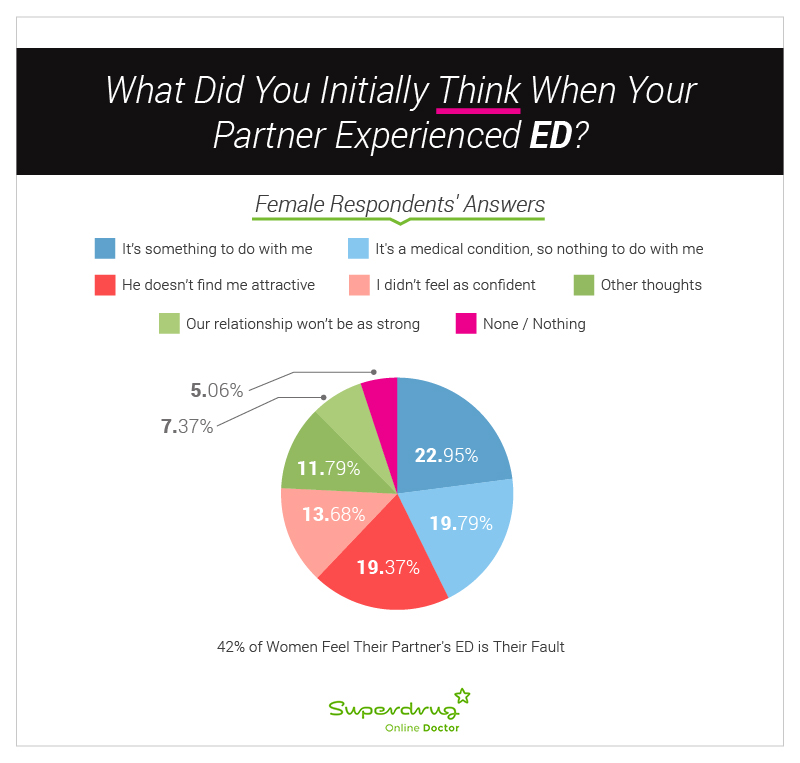 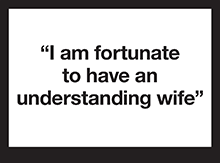 Though erectile dysfunction is a problem unique to men, there’s no doubt the experience affects their partners – and oftentimes, emotions run high. What did our survey participants have to say about their initial feelings about their partner’s ED?

Only around 20% of respondents categorised ED as a medical condition they couldn’t control. The brunt of response reflect women’s tendencies to take erectile dysfunction personally: nearly 23% said they believed the ED had something to do with them, while more than 19% cited feelings that their partners might not find them attractive, and nearly 14% said their confidence suffered.

“[It] made me feel like I wasn’t attractive and put me off initiating sex,” one woman wrote. Another admitted she became suspicious: “[It] made me doubt his attraction to me and his fidelity – was he getting affection elsewhere?” 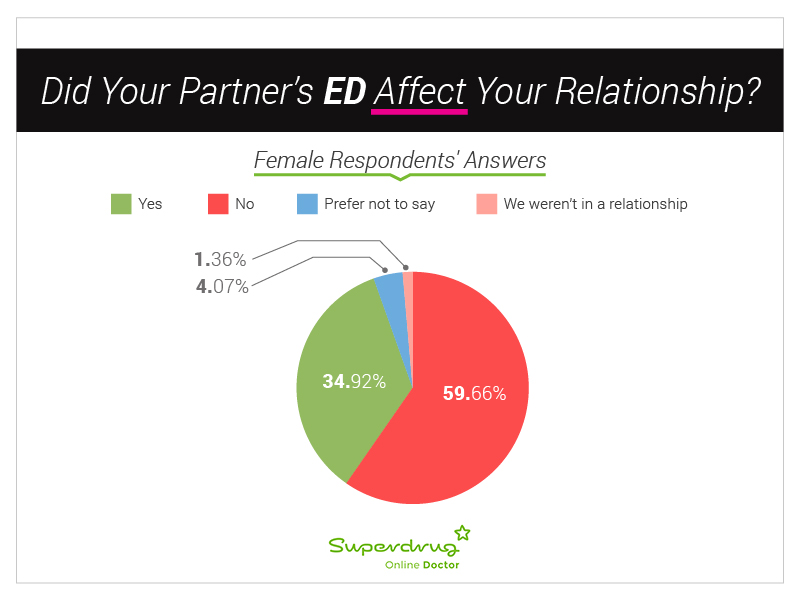 Erectile dysfunction can test even the strongest of relationships. “We hardly ever got close,” one woman wrote. “[It] felt like living with a friend rather than a partner.”

Nearly 60% of the women we asked said their partner’s ED did not affect their relationship, while more than 35% said it did. This positive outlook is reflected in some of the respondents’ comments: “It made us closer,” one woman wrote, “to find a way to solve the problem.” 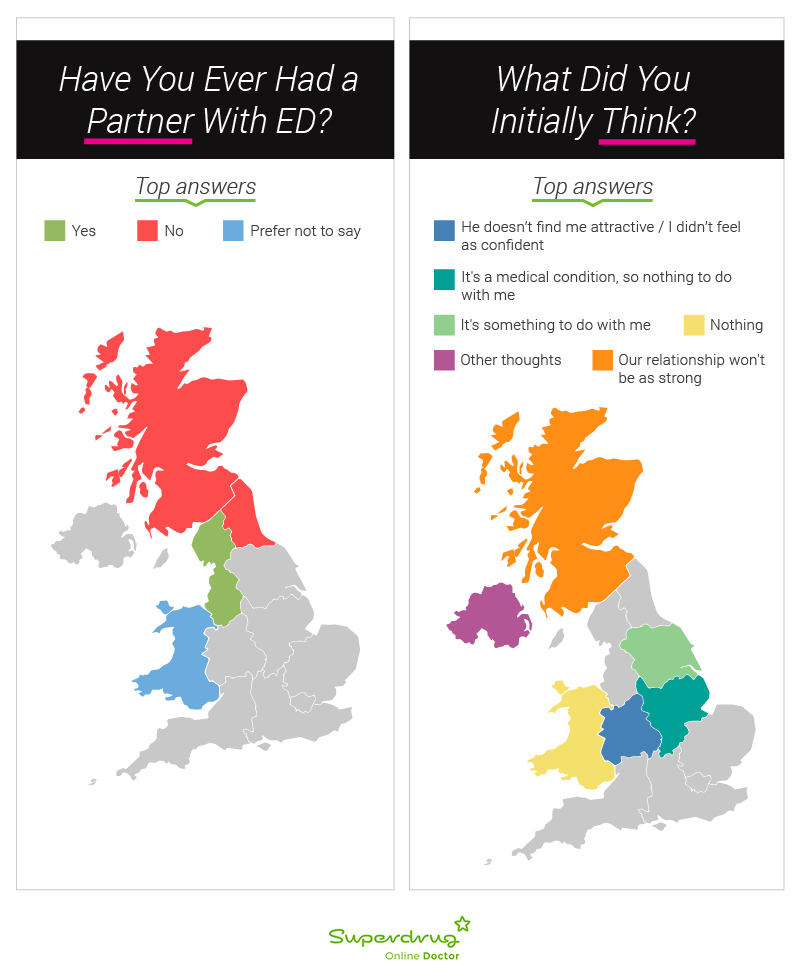 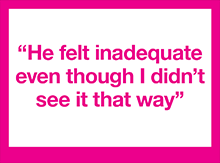 To see if people’s experiences with erectile dysfunction vary in different areas, we mapped our survey participants’ responses. When asked if they’d ever had a partner with ED, no was the top answer in Scotland and the North East, women in the North West said yes, and women in Wales preferred not to answer.

When asked about their initial thoughts on their partner’s ED, women in the West Midlands reported their confidence levels suffered and worried their partners didn’t find them attractive, while women in the East Midlands chalked it up to a medical condition. Scottish women worried their relationship wouldn’t be as strong, while those in Yorkshire and the Humber felt the diagnosis had something to do with them. Women in Northern Ireland predominantly marked the other category, while women in Wales reported thinking “nothing” on the subject. 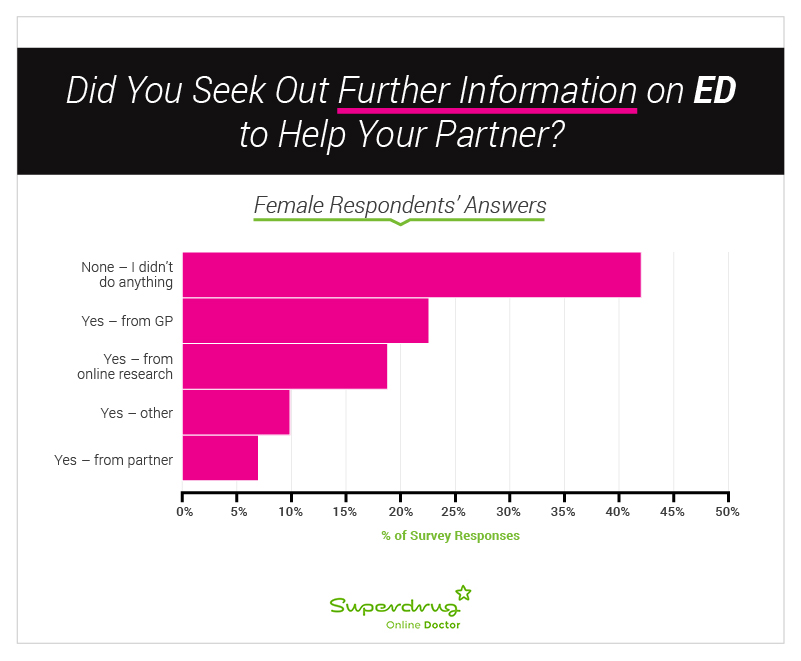 For couples struggling with ED, for many, the next logical step is to seek help. However, more than 40% of the women we surveyed said they didn’t take any steps to find answers or treatment. The good news? Nearly 23% turned to their GP for assistance. Another 19% went online to perform research – not surprising, given the sensitive nature of the subject. Very few respondents turned to friends, family, and pharmacists. 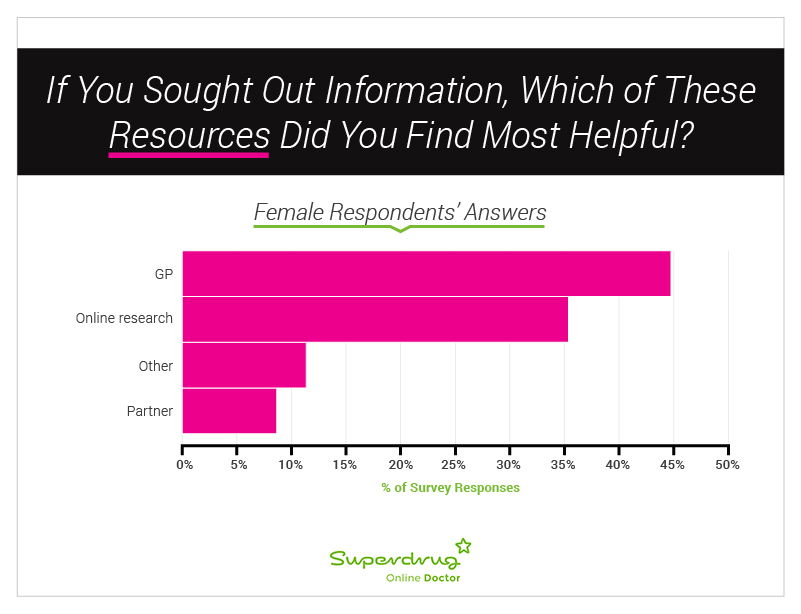 We wanted an honest answer – which resources truly help couples dealing with erectile dysfunction? The women who did seek assistance shared their experience: Around 45% said their GP was helpful, and another 35% found online research beneficial. Interestingly, the third-most helpful resource was a woman’s own partner: Nearly 1 in 10 women said he was a source of support. 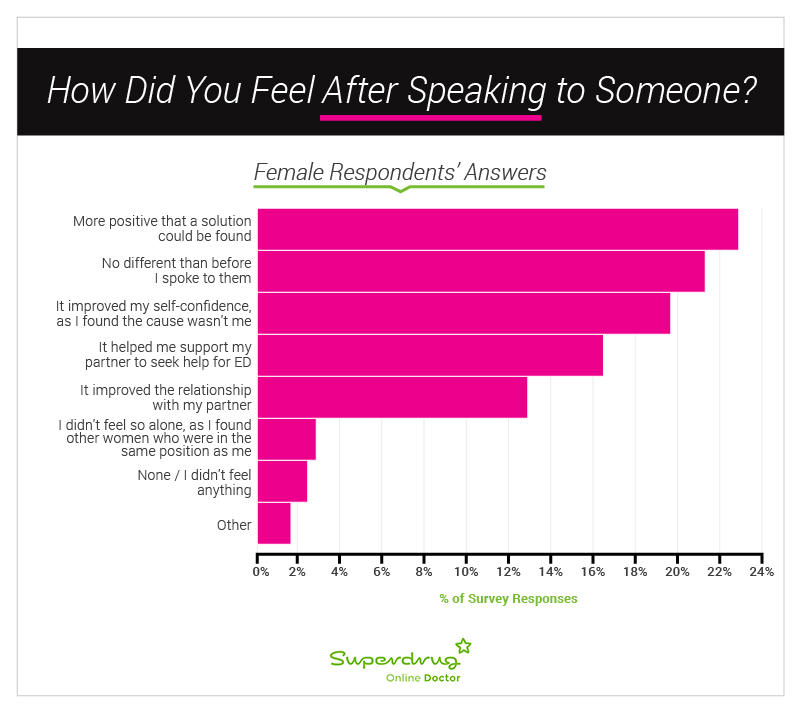 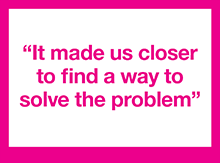 Seeking solutions during difficult situations can offer untold benefits. Many of the women we surveyed turned to others for support with their partner’s experience with erectile dysfunction, and we wanted to know how they felt afterwards. Around three quarters of women felt more positive after seeking assistance. Overall, nearly a quarter felt optimistic that a solution could be found, and another 20% reported feeling better knowing it wasn’t about them. The relationships benefited as well: 16% said seeking help empowered them to better support their partner, and 13% reported improvements in their relationship. Only around 21% said seeking help didn’t make a difference in their feelings.

Any couple who has ever struggled with erectile dysfunction can attest to its challenges. From physical concerns (is he ill?) to emotional worries (is he having an affair?), various factors may take their toll on a relationship.

But our survey reveals encouraging results: Across the U.K., many couples are educating themselves on erectile dysfunction, seeking help for the condition, and sticking through the difficult times. “[It] initially made us feel less close but only for a short time,” one woman wrote in our survey. “We are much stronger now.”

If you or your partner are experiencing erectile dysfunction, seek help today. Take a brief and confidential online assessment for free from Superdrug Online Doctor, and a GMC-registered doctor will review your information and prescribe an appropriate medicine which will be delivered straight to your home. For more valuable advice about ED, visit Superdrug Online Doctor to learn about the symptoms, the causes, and how to best help a partner who suffers from ED.

We surveyed 1,000 U.K. men and 1,000 U.K. women over the age of 35 about their experiences with ED. Eighteen of the survey questions were multiple-choice, and six of the 18 questions also had an optional free-text response. We analysed respondents’ demographics by age (35–55, 56–75, or 76-plus) and by region (East Anglia, East Midlands, London, North East, North West, Northern Ireland, Scotland, South East, South West, Wales, West Midlands, or Yorkshire and the Humber).