Whether it’s an age-old relationship or a fairly new one, friends are no doubt an important part of our lives. Studies suggest that good friends play a critical role in how healthy and happy we are, especially as we age. But what happens when someone likes their friend, but not so much their friend’s significant other? We surveyed over 1,500 people about their views on their friends’ partners and found that the vast majority disapproved of or disliked at least one of their friend’s significant others. We asked these individuals about the reasons behind their feelings, whether they were open and honest about them, and how they chose to intervene.

Read on to learn more about the difficult dynamics between friends and significant others. 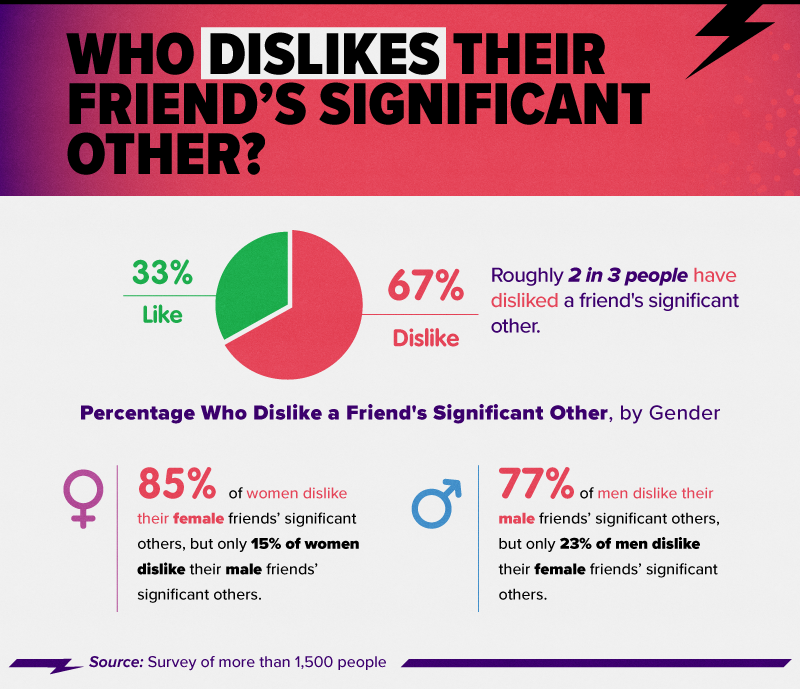 The situation may sound uncommon, but our survey results suggest roughly 2 in 3 people have disapproved of a friend’s significant other. Interestingly, our data also suggest that men are more likely to feel disapproval towards a female friend’s partner than women are towards a male friend’s partner. Even so, both men and women generally had disapproving feelings towards the partner of a friend who shared their gender. 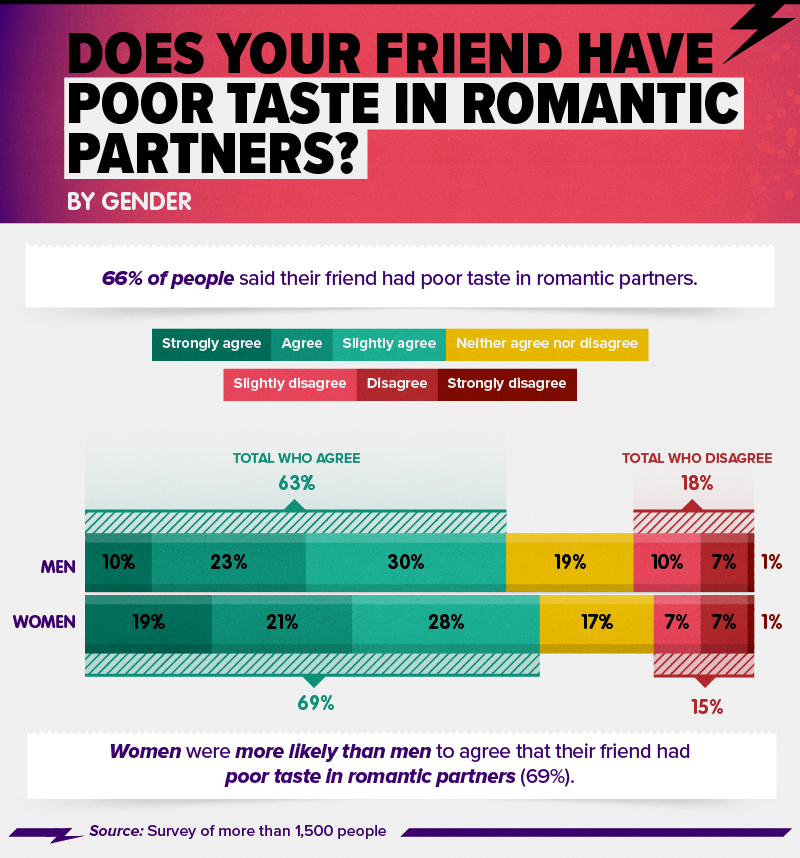 Female respondents tended to be more critical of their friend’s choice in significant others – around 69 percent said their friends had “poor taste” in romantic partners – but roughly 66 percent of overall respondents agreed with that statement. 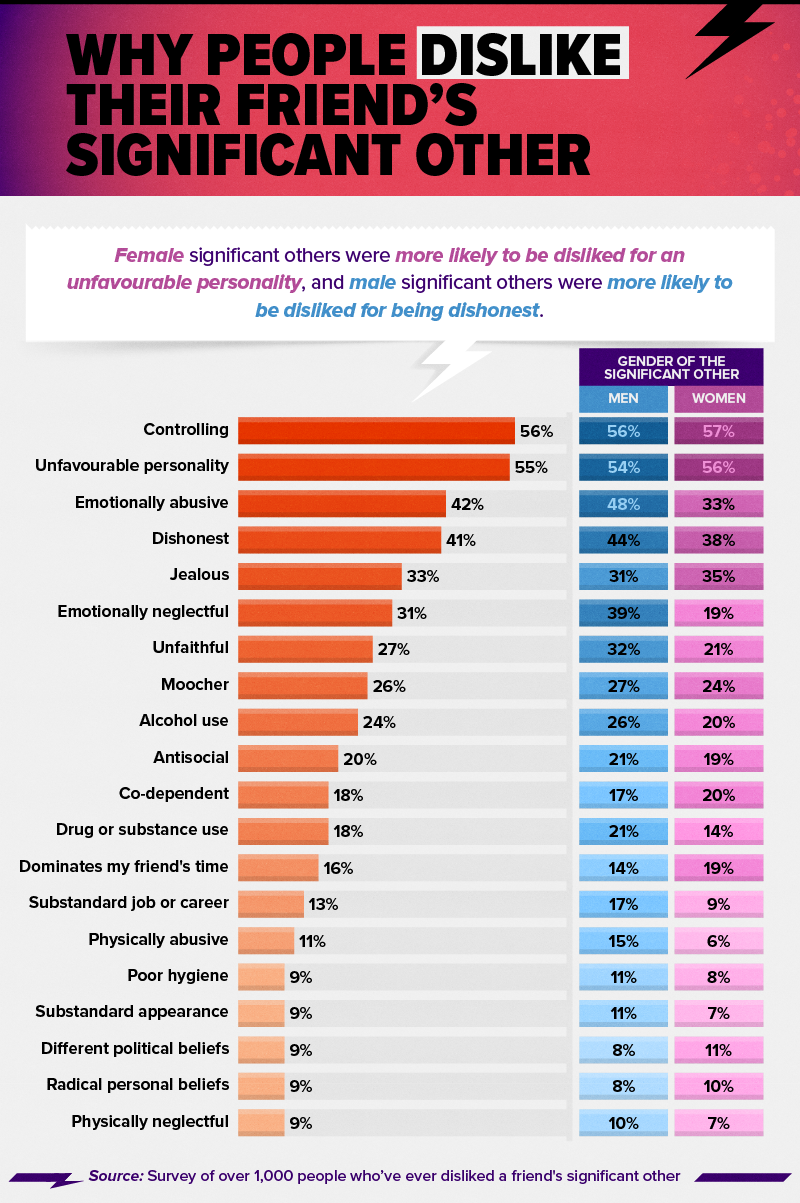 Naturally, some of us might feel protective towards our friends and who they choose for a romantic partner. But what are the red flags that friends are noticing – and how serious are they? We asked survey respondents who disliked a friend’s partner about the impetus behind their disapproval.

More than half of these respondents cited “controlling” behaviour and an “unfavourable personality” as key issues, while 42 percent said their friend’s partner was “emotionally abusive.” Jealous tendencies, emotional neglect, unfaithfulness, mooching, and alcohol use were also fairly common complaints. Female significant others were more likely to be accused of codependency or jealousy than male S.O.s, while male significant others were more likely to be called emotionally abusive and dishonest. 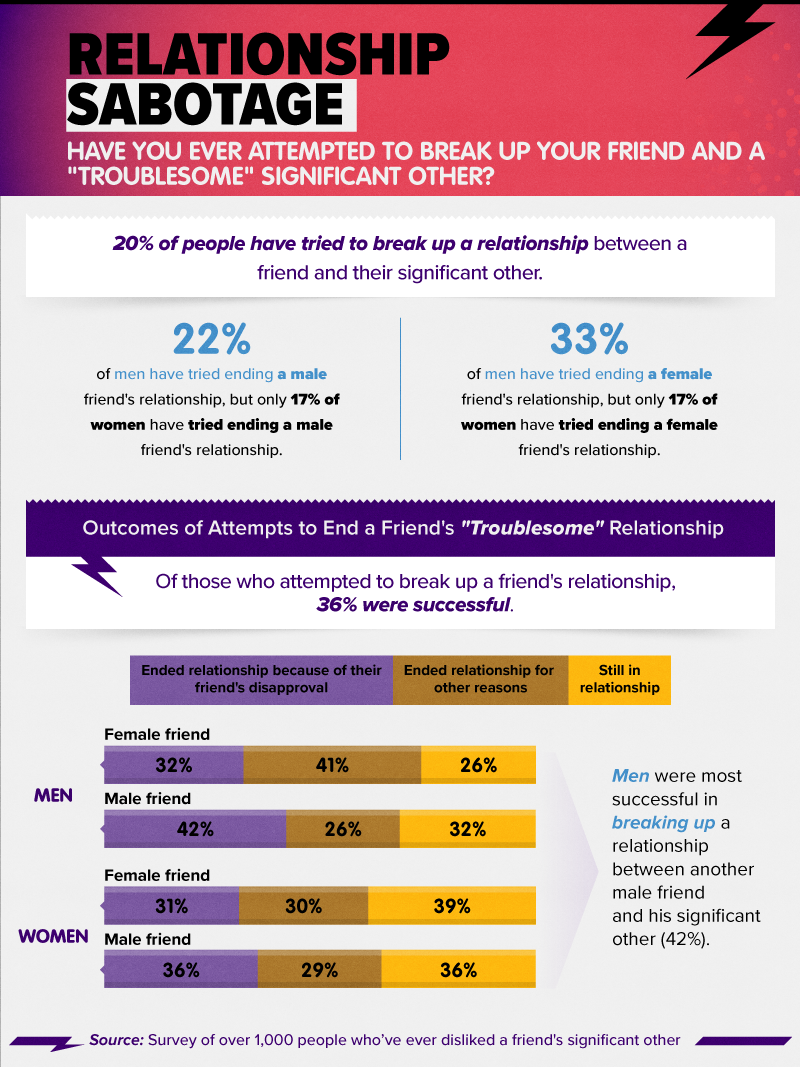 When it comes to disliking a friend’s partner, some would say it’s best to be honest. Either way, one thing is clear: Navigating this situation is so difficult that dozens of advice columns about it have cropped up on the web. According to our research, only a small minority of friends – about 20 percent – have tried to break up a relationship they deemed troublesome. Men were more likely to attempt severing a female friend’s relationship, whereas women were generally indiscriminate when it came to breaking up relationships of their male or female friends. Nevertheless, these efforts weren’t completely in vain – our data suggest about 36 percent of breakup-intervention attempts were successful in the end. 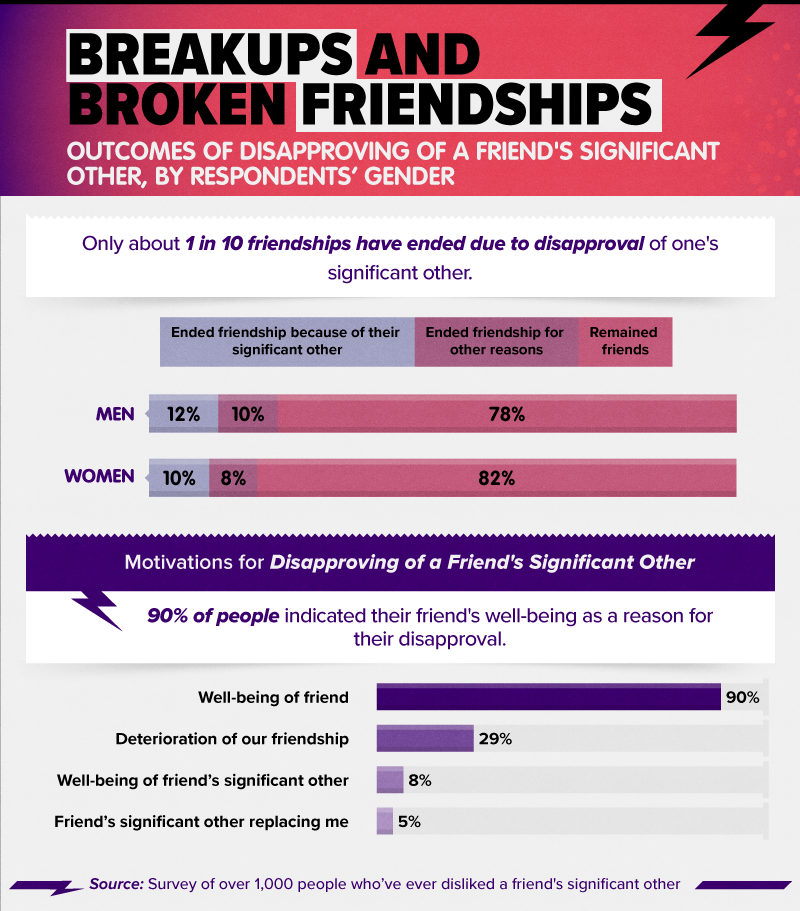 Expressing disapproval of a friend’s relationship certainly comes with risk, hence the reason entire articles on the web are solely dedicated to giving advice on how to express those feelings artfully. We asked survey participants about the outcomes they experienced after voicing concern about a friend’s relationship. Our results suggest that only about 1 in 10 friendships ended due to the disapproval of a significant other. Meanwhile, most respondents – around 90 percent – prefaced their concerns by saying that they cared about a friend’s well-being, indicating that this might be an effective talking point. After all, most male and female respondents agreed: It’s important that their friend likes their significant other.

What’s in a Word? 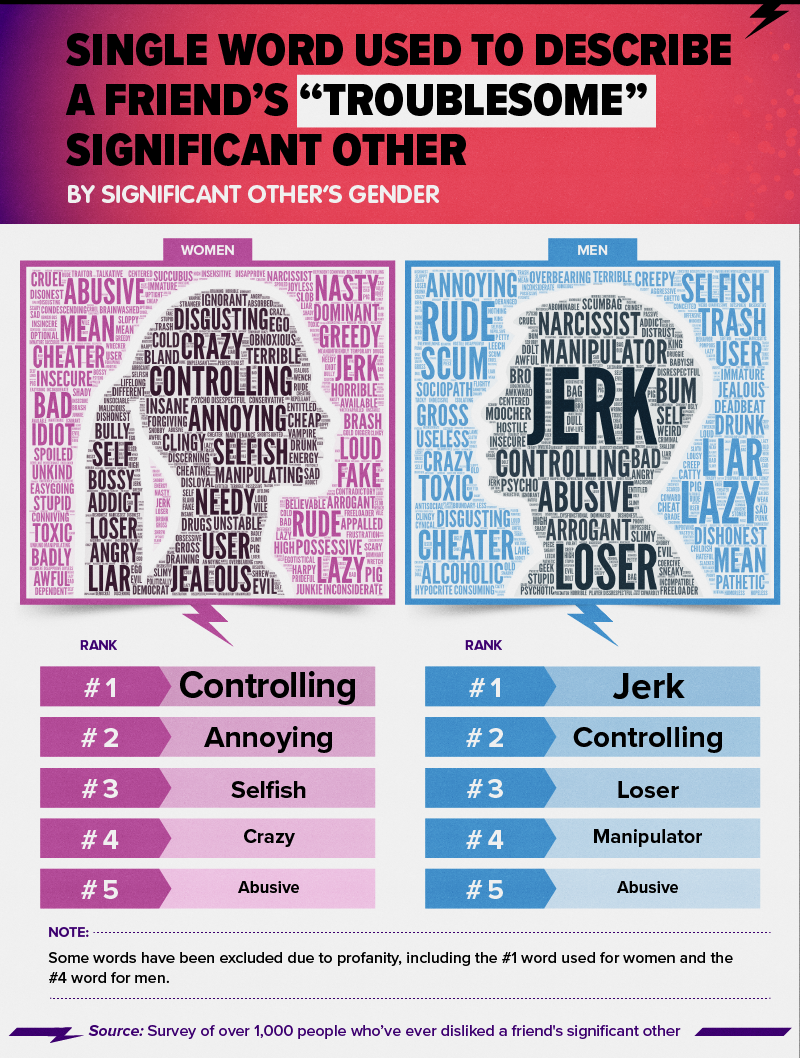 We asked survey participants to describe their friend’s problematic partners in one word. In the process, our results may have uncovered some perceived gender stereotypes. For example, female significant others were often described as “controlling,” “crazy,” “selfish,” “abusive,” and “annoying” – words that arguably underscore the “crazy woman trope.” Meanwhile, male significant others were generally described with words like “jerk,” “loser,” “abusive,” “controlling,” and “manipulator.”

Friendships are a virtue, but that doesn’t mean that they don’t face difficulty. This survey also provided key insight into how we can build healthier, happier, more honest relationships. Very few survey respondents reported losing their friendship over expressing disapproval of their friends’ partners, while many positively attributed their concerns as looking out for their friends’ well-being. Of those who attempted to break up a potentially unhealthy relationship, more than a third of respondents – roughly 36 percent – were successful.

This survey no doubt shows the difficult dynamics that many friends are forced to navigate, but it also gives a glimmer of hope: If a friend’s partner is really that bad, you might be an effective defence safeguarding against their harmful relationship. Whenever you observe a friend’s emotional health deteriorating because of a partner, there's a high chance their psychological stress has affected their physical health as well. If you suspect your friend’s general health has declined as a result of an abusive or otherwise toxic partner, it might be a good idea to direct them towards a consultation with a traditional physician in addition to mental counseling services.

Certainly, building and maintaining healthy relationships or managing emotional distress over a friend’s significant other can be a daunting task. If you are seeking resources for sexual health in your own relationship, visit us at Superdrug Online Doctor. We provide speedy, confidential, digital consultation — and where appropriate, our doctors can prescribe medication and have it discreetly delivered to your door.

Fifty-five percent of respondents identified as women, and 45 percent identified as men. The age of participants ranged from 18 to 73 with an average age of 35 and a standard deviation of 10.4.

Participants were asked to answer questions about their most memorable instances of feeling significant disdain for or disapproval of a significant other.

The data presented here rely on self-reporting. There are many issues with self-reported data. These issues include but are not limited to: selective memory, telescoping, attribution, and exaggeration. No statistical testing was performed, so the claims listed above are based on means alone. As such, this content is purely exploratory, and future research should approach this topic more rigorously.

Do you think it’s important that one’s friends like their significant other? You’re welcome to share the results on this page with your audiences for noncommercial purposes. Just don’t forget to link back so readers can get the full story. For any questions or concerns, please contact us at [email protected].