Seeking out therapy has many potential benefits for those who choose to give it a try: Improved communication skills, feelings of empowerment, and the development of healthy coping strategies are just a few things to be gained from seeing a mental health professional. Encouragingly, people have become more open to therapy and mental health management, though stigma surrounding mental health is not yet a thing of the past.

However, beyond being potentially beneficial to the individual, therapy can also make a big difference in personal relationships, particularly romantic ones. That’s what we set out to explore in this study. Surveying both Britons and Americans currently in relationships, we asked about their experiences with individual therapy and how the act of one (or both) people in the relationship attending therapy impacts them. We also surveyed those in relationships where neither party had ever done individual therapy about their openness to giving it a try. Keep reading to find out what we gleaned from their insights. 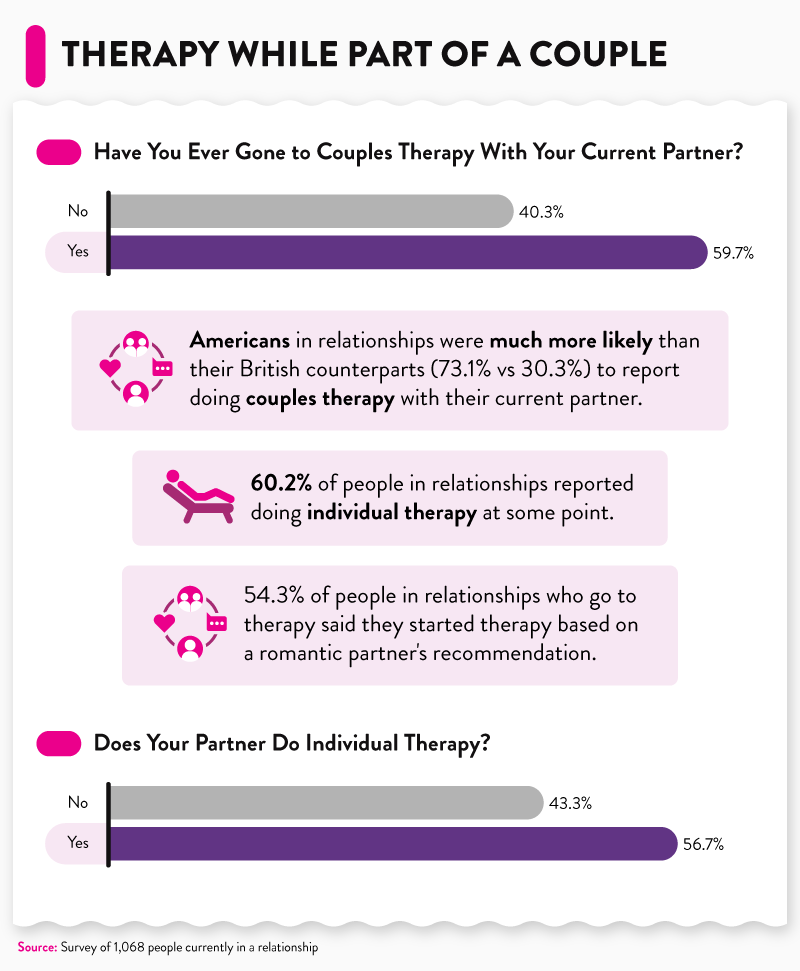 We first wanted to get an idea of what experiences people had with therapy of all kinds, including couples therapy. Almost 60% of the people in relationships we surveyed said they’d done couples therapy with their current partner, though Americans were much more likely to report doing so than their British counterparts. Counter to what people often assume, attending couples therapy doesn’t mean a relationship is in trouble. While it can help resolve conflict and other issues, couples therapy is also helpful in learning about each other.

Going to Therapy While Coupled Up 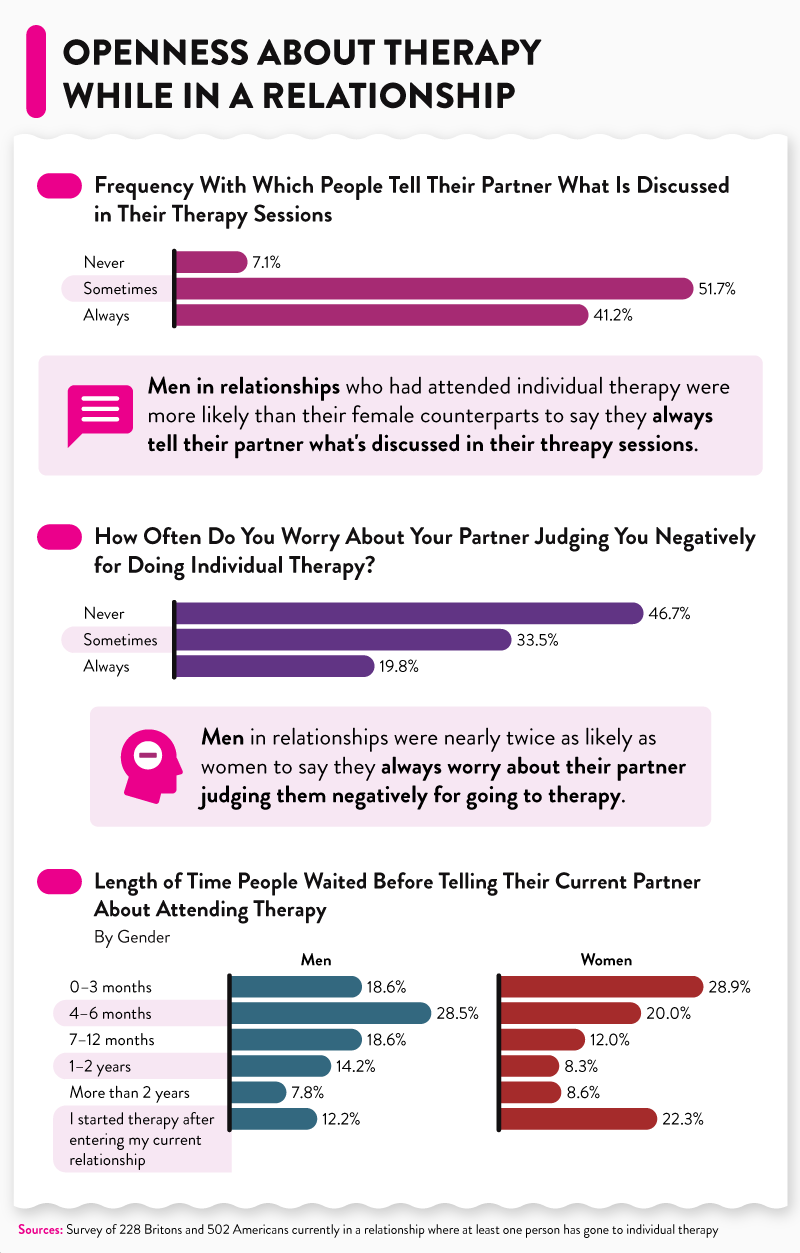 While you always hope that you can be open and honest with your partner, continuing mental health stigmas can make disclosing individual therapy potentially nerve-wracking. Of the people in relationships we surveyed, most reported disclosing their therapy routine to their partner within the first six months of being together, though women were much more likely than men to tell their partner even earlier within the first three months.

While mental health stigmas may still be something society has to grapple with, many people felt sure in their choice to seek help within their relationship. Roughly 47% of people in relationships said they never worry about their partner judging them negatively for going to therapy. Unfortunately, the flip-side of that is the 53% of people saying they sometimes or always worry about their partner judging them. 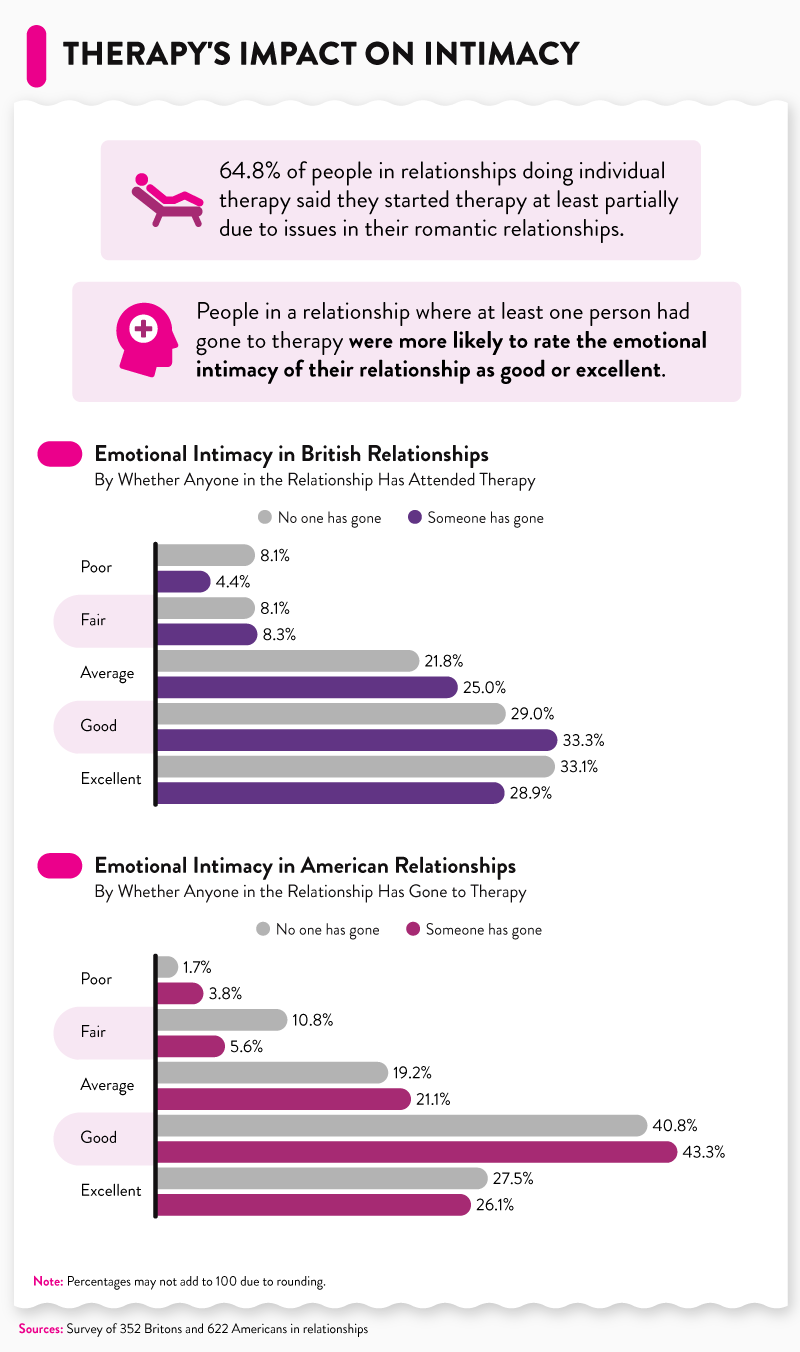 Regardless of why they chose to start therapy, what likely matters most to many people is the results they see in their everyday life. Among the people surveyed who reported doing therapy on their own, 64.8% of them said they had decided to start therapy, at least in part, due to issues in their romantic relationships (either past or present).

Emotional intimacy in a relationship relates to how connected a person feels to their partner on a deeper level – one involving feelings, vulnerabilities, and trust. This seemed like a fitting way to evaluate how therapy impacts romantic relationships.

An important thing to remember when considering these findings is that people often overestimate how self-aware they are. There are many ways to build self-awareness (also sometimes used interchangeably with emotional intelligence), with therapy being one. Therefore, it’s possible that respondents in relationships with at least one person going to therapy have more self-awareness about themselves and the state of the romantic relationship than people in relationships where neither party has participated in therapy.

Lastly, we wanted to look at people in relationships where neither person had tried individual therapy and what they thought about potentially giving counselling for their mental health a go. Britons in relationships who had never done therapy before were far less likely to be open to it than Americans, with 33.1% of them saying they aren’t open to it at all. Americans in relationships who hadn’t tried therapy before were also nearly twice as likely to say they were extremely open to it, compared to Britons. However, Britons may be coming around, albeit slowly. There are indications that people in the UK are coming around to the idea of therapy, especially with members of the royal family speaking out about mental health.

Interestingly, people’s feelings tended to change when considering their partner. Nearly 55% of people in relationships where neither person had therapy experience thought their partner would benefit from seeking counselling. There are many reasons why people may play the “blame game” in their relationships, but the fundamental attribution error could also be at play. The fundamental attribution error describes humans’ tendency to excuse themselves for behaviour, chalking it up to external factors outside their control, while criticising the same behaviour in others by deeming it a character flaw.

Putting Therapy on the Table

There’s still a ways to go, though, toward destigmatising therapy – both as an individual and as part of a couple. At Superdrug Online Doctor, we understand that conversations around mental and physical health can be intimidating at times. You can feel confident in discussing your physical and sexual health with a physician through the privacy and convenience of our digital consultations. Regardless of what you need assistance with, we believe in providing the support you need. Visit Superdrug Online Doctor today for more information.

Deciding to go to therapy can be a daunting decision, especially while in a romantic relationship. If someone you know would benefit from the information in this project, you can share for any noncommercial reuse. Please link back here so the entire project and its methodology can be viewed. This also gives credit to our contributors, whose efforts make this work possible.