Many of us are all too familiar with these classic breakup lines – and the feelings of frustration they consistently provoke. After all, these polite explanations are short on substance, which can be infuriating for the rejected ex. Sometimes, we want the cold, hard truth, even if it hurts.

Why do people really split from their partners, even if they’re too polite to say so? We surveyed 1,000 individuals about what caused them to call it quits with an ex, exploring the thoughts and feelings that commonly precipitate breakups. We also studied the heartbroken perspective, revealing whether people can see a breakup coming and what they eventually do to move on.

How do our results compare to your breakup experiences, and what could our findings mean for your current relationship? For a dose of truth about breakup causes, keep reading.

Before the Breakup: Causes and Contemplation

Breakups are often ambiguous: There’s rarely a single clear reason why things didn’t work out. But among our respondents, a few breakup explanations were especially common. Of those who initiated a breakup, 31% said mismatched aspirations had caused them to call it quits. If two partners have radically different visions of the future – as individuals or as a couple – perhaps uncoupling is more prudent than attempting to compromise. 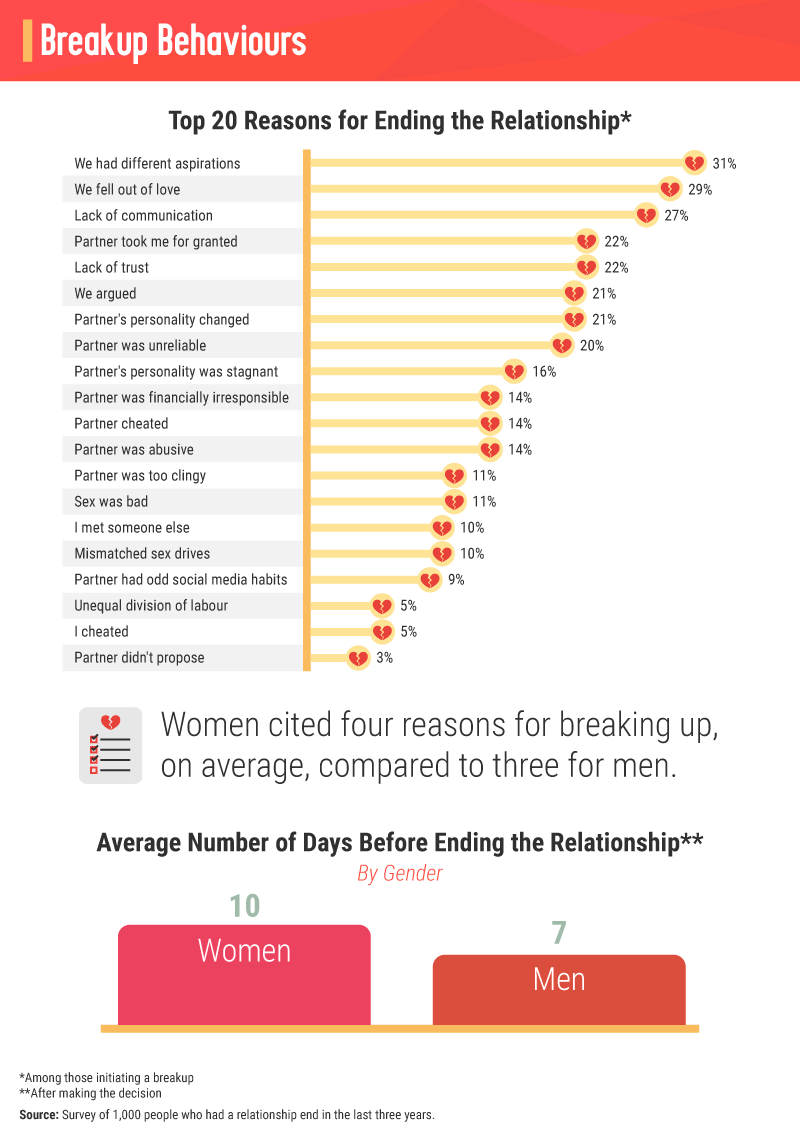 29% of breakup initiators said they had fallen out of love with their partners, while 27% claimed lack of communication had caused their relationship’s demise. According to experts, these two breakup motivations can be inextricably entwined: Emotional intimacy requires consistent communication.

Interestingly, issues of personality were more likely to create breakups than outright infidelity. Just 14% said they broke up with their partner because they had been cheated on, while only 5% said they initiated the breakup because of their own infidelity. These findings represent an interesting counterpoint to recent research suggesting that relatively few couples remain together following an affair.

On average, women waited longer than men to broach the subject of breaking up once they made up their minds to call it quits. Additionally, initiators citing specific reasons tended to drag their feet. Those who blamed a lack of communication took 12 days, on average: In relationships where individuals struggle to share their feelings, it’s no wonder such a difficult conversation gets delayed.

Can You See It Coming?

Now let’s consider the other side of this dynamic: that of the partner being dumped. Our results suggested that most people in this position weren’t entirely blindsided by the breakup, with more than two-thirds saying they saw some warning signs. The most common red flags were forms of withdrawal, such as lack of communication or less time spent together. Of course, these developments could be good reasons to end a relationship yourself, rather than mere signs that your partner is preparing to move on. 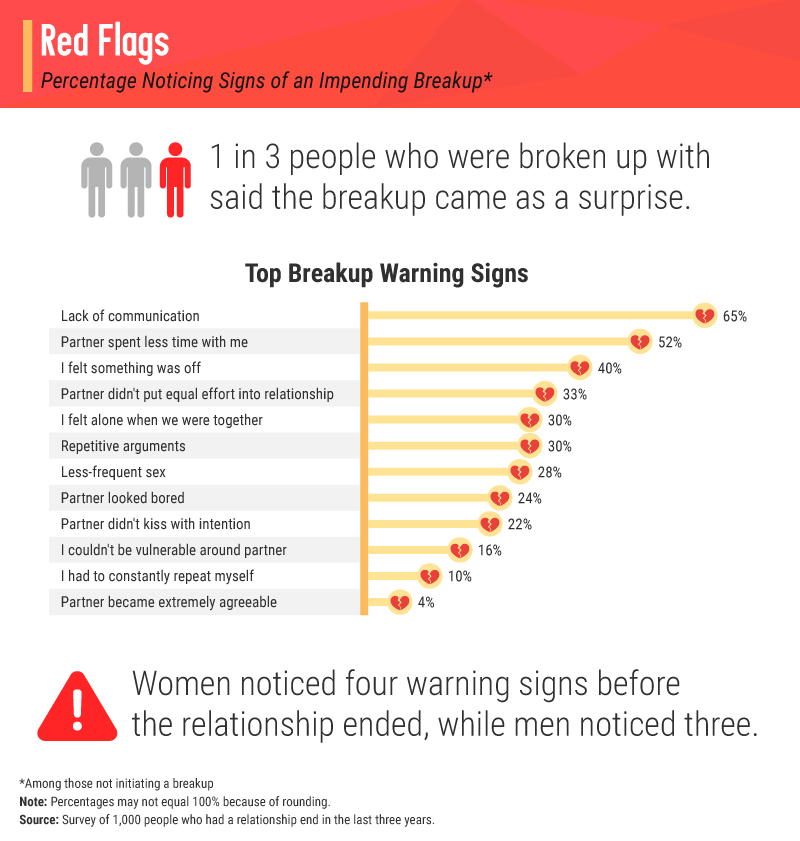 Many respondents also described less tangible indicators of an impending split, such as a gut feeling that something was off or a sense of being alone even when with their partners. For others, a decline in physical intimacy, including sex and kissing, signalled that something was wrong. Some experts caution that shifts in sexual activity occur regularly in relationships, and that committed couples can work to reinvigorate their sex lives. For respondents who were dumped, however, less intimacy did sometimes foreshadow separation.

Interestingly, individuals who were broken up with identified these signs well in advance of the actual conversation. If they had attempted to address these problems promptly, could they have averted the split, or simply caused the breakup to happen sooner?

Breakup Techniques: From Messy to Mature

No one approaches breakup conversations with high expectations: No matter how well you communicate, feelings are bound to get hurt. Still, our findings suggested that some tactics and choices could help the process of splitting up go as smoothly as possible. 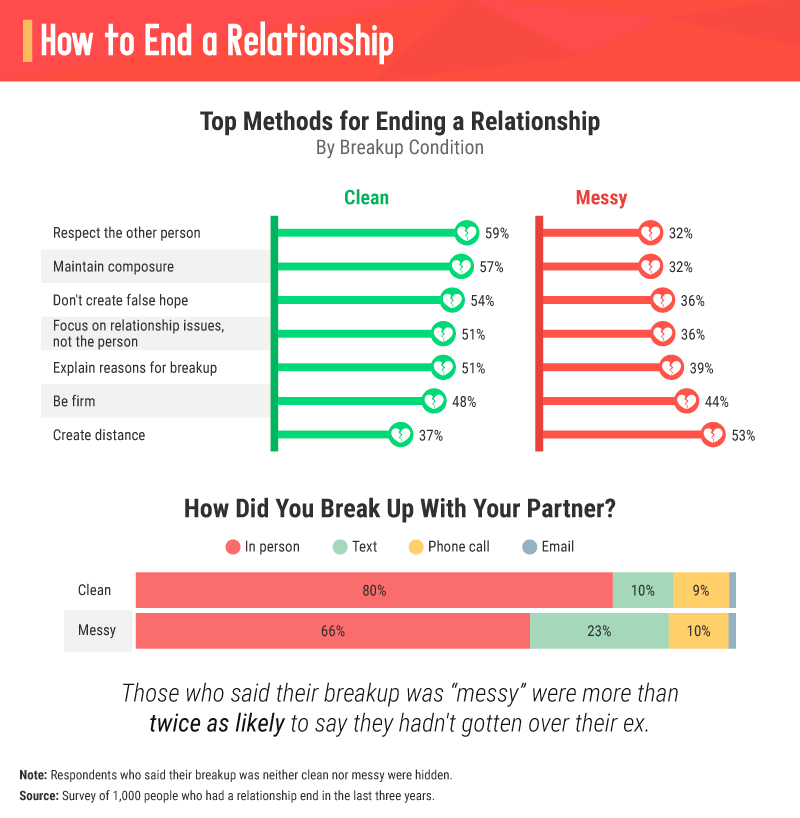 Respondents who said their breakups were “clean” were far more likely to have remained respectful to their partner and kept their composure during the difficult conversation. Of course, these behaviours are easier said than done: Once accusations start flying, it’s tough to keep your cool.

People who experienced clean breakups were also much more likely to be clear about why they were ending things and to avoid creating false hope. Experts agree that being honest and firm is actually the kindest way to end things. While some may be tempted to soften the blow, lack of clarity will only lead to more hurt.

Another important breakup conversation takeaway: The medium matters just as much as the message. While most breakups happened in person, 23% of messy ones took place over text message. Unfortunately, texting after a breakup can be even more cowardly, keeping someone emotionally engaged after parting ways. However they unfold, though, our findings showed that messy breakups have lasting ramifications, making it much harder to move on.

Methods for Moving On

When a romance comes to an end, what’s the swiftest way to heal and move forward? Our respondents’ success with various approaches differed substantially by gender. For women, the strategy that got them over their ex the fastest was to stop analysing what happened in the relationship. For men, it was not to be friends any longer. 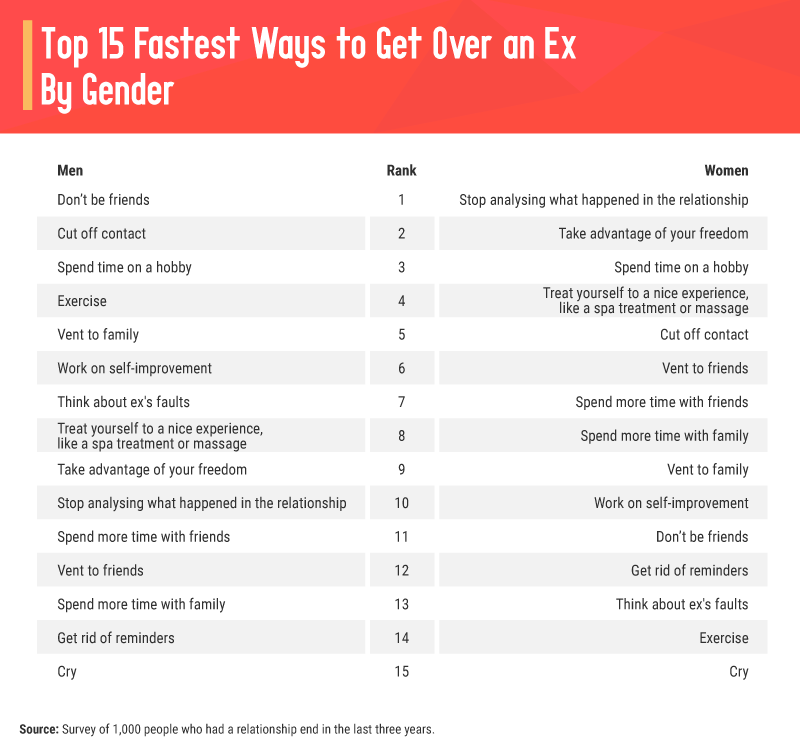 Men who stopped being friends with their ex altogether healed in 39 days, on average, while women needed 49. The feasibility of friendship among exes is a continual subject of debate, but our results indicated that many people (especially men) might be better off not trying at all.

Interestingly, some classic post-breakup activities ranked among the least effective methods of moving on. For example, psychology researchers have found that reminders of one’s ex, such as photos, can cause real distress in the aftermath of a breakup. But our results indicated that trashing reminders of an ex was not a particularly fast path to healing. Similarly, crying didn’t seem to help much in its own right, ranking at the very bottom of our list.

Researchers are still debating cohabitation: Some claim it elevates the risk of divorce, while others say it helps couples stay together. According to our findings, if a couple lived together at the time of their breakup, the soon-to-be-dumped partner saw it coming three days earlier on average. This could be related to a change in sex habits: Cohabiting couples were far more likely to stop having sex in advance of the split.

As one might imagine, breakups between couples who live together can be personally and practically devastating. For reasons related to cost and rental contracts, some exes even find themselves stuck in the same flat long after their relationship ends. Perhaps because of these logistical considerations, cohabiting partners were significantly more likely to deem their breakups “extremely painful.”

Breakup causes differed somewhat for couples who lived together as well. Among cohabitors, a lack of communication was the top breakup reason. Along related lines, they were more likely to say their partners took them for granted. These results prove that physical proximity does not equate to intimacy: In some ways, couples who live together must work harder to remain connected to their significant others.

Reflecting on our results, it’s hard to miss an overarching conclusion: Every relationship entails some risk. Whenever we’re courageous enough to love someone deeply, we know they may choose to leave. Similarly, when we begin a new romance, we’re aware that we may someday need to broach a difficult breakup.

In light of this reality, all we can do is proceed honestly and thoughtfully, showing our partners respect and communicating hard truths. Bitter breakups benefit no one, so practice kindness whenever possible. That process begins with being kind to yourself.

Too often, we put our own health and wellness on the back burner – especially when relationships end. Superdrug Online Doctor makes it simple to get the health care you need through convenient and discreet virtual consultations. Enjoy absolute privacy from the comfort of home, and get your orders delivered fast at no additional cost.

For this campaign, we used Amazon Mechanical Turk and Clickworker to survey 1,000 people about their past relationships. To qualify for the survey, respondents had to say they’ve been in a relationship that ended in the past three years. Half of the responses came from initiators of the breakup, and the other half were those who on the receiving end of the breakup. Half of the respondents were based in the United States, while the other half was based in the European Union.

There was an attention-check question about halfway through the survey. Respondents were disqualified and excluded from our study if they failed the question.

This study relies on self-reported data. Several problems stem from self-reported data, including but not limited to selective memory, exaggeration, and telescoping. We can’t be certain how closely our results match up to reality.

As we saw in this campaign, the smartest thing you can do if you want to break up with your significant other in a clean fashion is to show the other person respect when you do it. You know what else is a smart thing to do? Sharing this study with your followers. Just be sure that it’s for noncommercial use and you link back to this page. If you have any questions about the data, please contact [email protected].