Ever been hung up on someone from a past relationship? Examples of the “one that got away” are common in movies and TV: Ross had Rachel, Finch had Stifler’s mom. But how common are they in real life? If you’ve struggled to forget your first love, take solace in knowing you aren’t alone.

We polled nearly 1,000 Europeans and Americans about their previous relationships and found it’s actually more common than it is in the movies. Over 70 percent of people think about “the one that got away.” But who are these people, and what is it about past relationships that keep us on the hook all these years later? We explored all of these concepts to better understand how this may impact relationships and, more specifically, the health of the relationships. Read on to see what we discovered.

Don’t worry, it’s really not that uncommon. The vast majority of people still think about someone from a past relationship, even to the point of believing they’re their ideal match. The problem is there’s no one-size-fits-all way of moving on from someone. Some experts believe it takes 11 weeks to get over a breakup, but stretch that to 18 months after a divorce. Regardless of how long it’s been, we found 71 percent of people out there are wondering “what if?” about someone they used to be with. 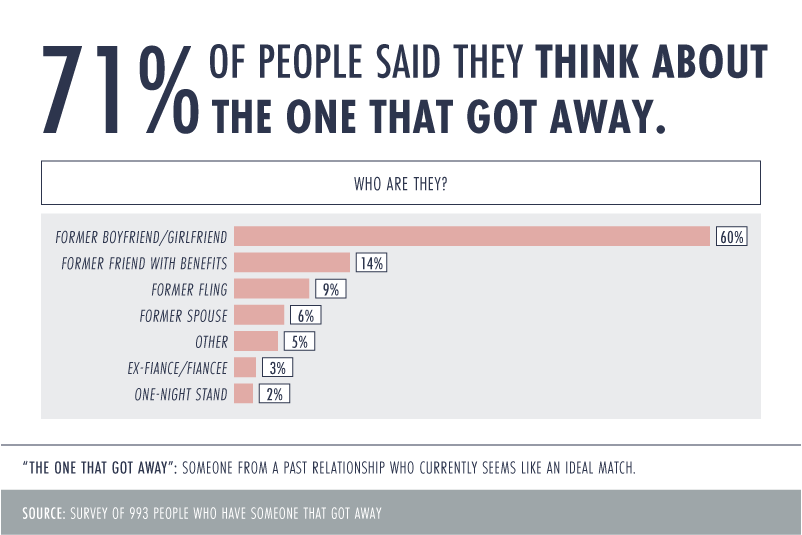 Of those, 60 percent wished to spark a relationship with a former boyfriend or girlfriend. That’s 10 times the amount of people longing for a former spouse.

With casual sex on the rise, FWB (friend with benefits) relationships have made the transition from myth to run-of-the-mill in a matter of no time. Sixty percent of people admit to having had a FWB. But it seems like rule No. 1 is being broken – people are catching feelings for their bed buddies, with the second most common “one that got away” being a former friend with benefits.

What about one-night stands? Surely they’re safe from the old predicament of falling for someone? Apparently not, as 2 percent of participants found themselves longing over a one-night stand.

Where Did It All Go Wrong?

With so many still thinking about the “one that got away,” it makes you wonder why things didn’t work out in the first place. Where did it all go wrong from those early days and rambunctious nights? We found it’s rarely because the sexual spark disappeared. Only 4 percent of relationships break down because of what’s happened between the sheets, which challenges scientific studies promoting the importance of sex in a healthy relationship. 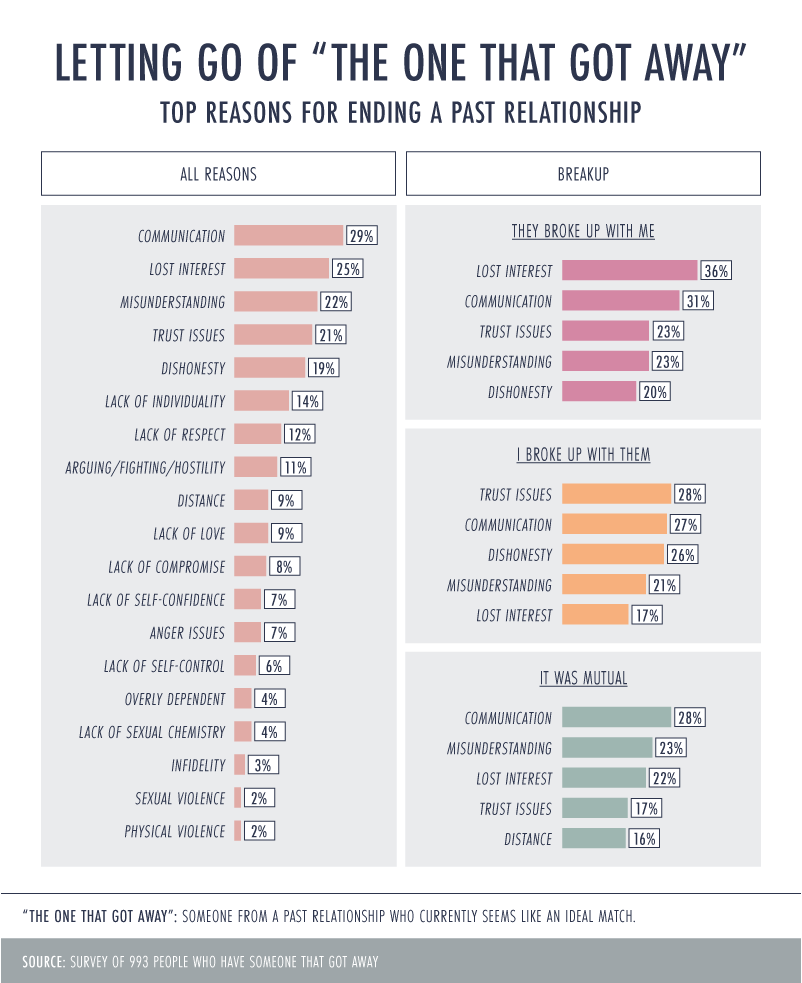 How couples communicate with one another is the main reason why things fall apart. In fact, when it comes to the “we need to talk” moment, it doesn’t matter if people are on the giving or receiving end. Communication is the motive behind more than a quarter of breakups.

What about the classic case of “I’m just not that into you anymore”? We found it was the No. 1 reason people were broken up with. But is it just a cop-out? A catchall excuse to end things? Something’s getting lost in translation because a lack of interest is mentioned less than half as often by the people doing the breaking up.

Is Breaking Up on Good Terms Bad for You?

As a relationship comes to an end, the conundrum of whether to go cold turkey creeps back into the equation. It’s easier said than done. We found that almost half of people still communicated with their “one that got away,” and nearly a third were currently in a relationship. Perhaps there’s something to the idea that dealing with a breakup is akin to an addict going through withdrawal. Some simply can’t do it. 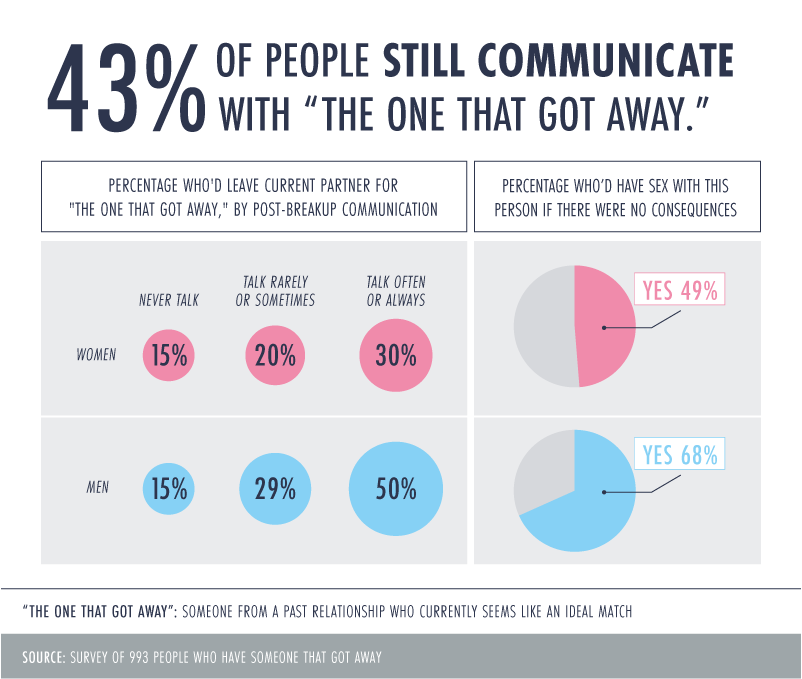 Beyond the suggestion that people who befriend their exes are narcissists and psychopaths, going cold turkey is just a good rule of thumb if you’re serious about your new partner. We found women who frequently talked to their exes were twice as likely to ditch their current relationship than those who weren’t on speaking terms. The opposite sex was even keener. Half of men who frequently stayed in touch with their exes said they would break up their current relationship to return to the “one that got away.”

Are the men leading themselves along? Studies have shown men can misread women’s signals as signs of sexual attraction. Of the men and women who regularly stayed in touch, men were much more likely (50 percent) than women (30 percent) to leave their current partner to go back to a past relationship.

Is Social Media Stopping People From Moving On?

Not talking to an ex is one thing, but never keeping tabs on them is a different story. Checking up on “the one that got away” is dangerous territory, but that doesn’t stop nearly two-thirds of people from doing it. 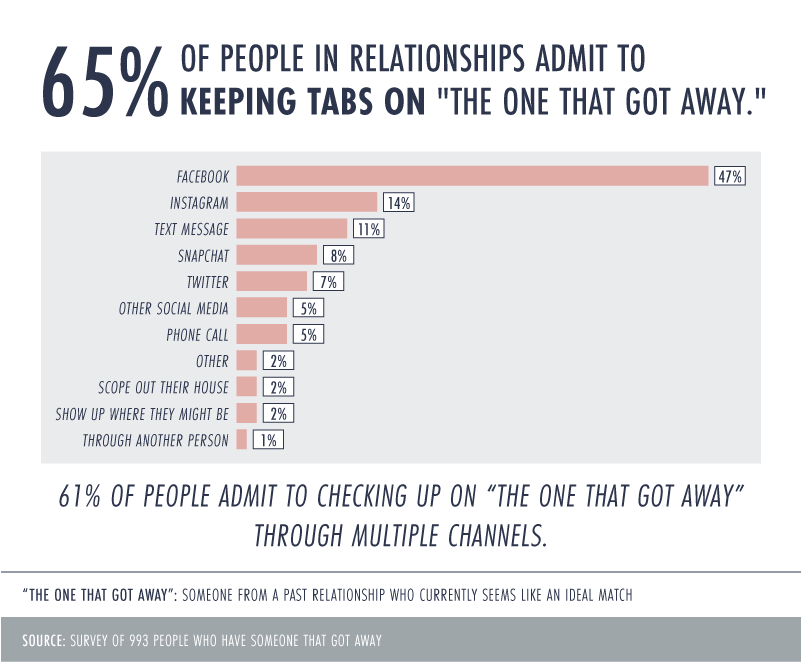 At a time when the average internet user has seven social media accounts, it’s never been easier – or rather, it’s never been harder not to check in on an ex. Of the people that did keep tabs on previous partners, 4 in 5 did so through social media channels, and 94 percent used more than one method to find out about their ex.

Stalking someone on social media may not be representative of where their life is really at. People tend to put their best foot forward when it comes to online personas, particularly after a breakup. One tip is to not read too much into what they’re posting; just push forward with moving on.

Getting Over “The One That Got Away”

Our findings suggest nearly three-quarters of people still long for someone from a past relationship. Regardless of the reason things didn’t work out, it appears the best way to move on, particularly if you’re in a new relationship, is to sever all ties with your ex. Staying in communication, or keeping tabs on how they’re getting on, could draw out the process of properly getting over them. Of course, this isn’t the case for everyone.

How you choose to get over “the one that got away” is up to you. Go cold turkey, or stay close friends. Wait for the relationship that’s right for you, or get back in the game. It’s all a matter of personal preference. One thing that shouldn’t get in the way is your sexual health. As not everyone finds it easy to talk about these kinds of intimate issues, Superdrug Online Doctor offers a quick, confidential, and virtual consultation service. You’ll get to choose your preferred medication, our doctors provide a prescription, and it’s all discreetly delivered straight to your door.

We collected 993 responses from participants who said “Yes” when asked, “Do you ever think about someone from a past relationship who currently seems like an ideal match?” Forty-nine percent of participants were Europeans, while 51 percent were American.

The data we are presenting rely on self-reporting. There are many issues with self-reported data. These issues include but are not limited to: selective memory, telescoping, attribution, and exaggeration. No statistical testing was performed, so the claims listed above are based on means alone. As such, this content is purely exploratory, and future research should approach this topic more rigorously.

If you think your readers will be interested in “the one,” how they got away, and how to get over them, you’re welcome to use our findings and images for noncommercial purposes. Please don’t forget attribution. Just credit us for our work by providing a link to this page.