Healthy relationships are built on a foundation of trust, but even the most trusting individuals can sometimes question their partners’ loyalty.

We discovered how people walked the fine line between letting their imaginations run wild and turning a blind eye to blatant signals by asking 1,000 Europeans and Americans about the behaviours that made them most suspicious of their partners, and, once the truth came to light, whether they were right to question their loyalty. Here’s what we learned.

Signs of Betrayal – All in Our Heads?

We compiled a list of 22 signs of potential cheating from dozens of articles and thousands of forum posts reflecting people’s real-life experiences. Some were subtle (e.g., working longer hours), while others were damning (e.g., getting an STI from a significant other).

In most relationships, there is the potential for becoming suspicious, as 93.5 percent of people noticed at least one of the 22 signs in a current or past relationship. The three most common – observed by 53 to 55 percent of respondents – were having sex less often, partners leaving the room to text, and significant others having mood swings.

Europeans and Americans noticed most of the signs with a similar frequency, but there were a few interesting differences. Europeans received unexpected gifts from partners 54 percent more than Americans, whereas a partner changing the pass code on their phone was 34 percent more commonly observed in America than Europe.

While these observations didn’t always make our respondents suspicious of their partners, on average, when someone made one of the 22 observations above, it created at least mild suspicion 69 percent of the time. In other words, more often than not, these changes in behaviour and routine triggered some level of suspicion. How much depends on the event in question.

The signs that caused the largest proportion of people to feel highly suspicious were catching an STI (which, if knowingly transmitted from one partner to another, is illegal in the UK and US), finding nude pictures on their partner’s phone, and being banned from accessing their partner’s phone entirely. On average, Americans noticed suspicious signs related to their partners’ phone use more often than Europeans and found them more troubling. For instance, 35 percent of Europeans said that their partner precluding access to their phone was highly suspicious, compared to 48 percent of Americans.

Between the sexes, women found phone-related signals more suspicious. Women were 73 percent more likely than men to think their partner changing their phone’s passcode was highly suspect, and 38 percent more inclined to distrust their partner when he or she left the room to text. While some other signs caused more suspicion, leaving the room to text caused the most doubt while at the same time being noticed by a majority of people. 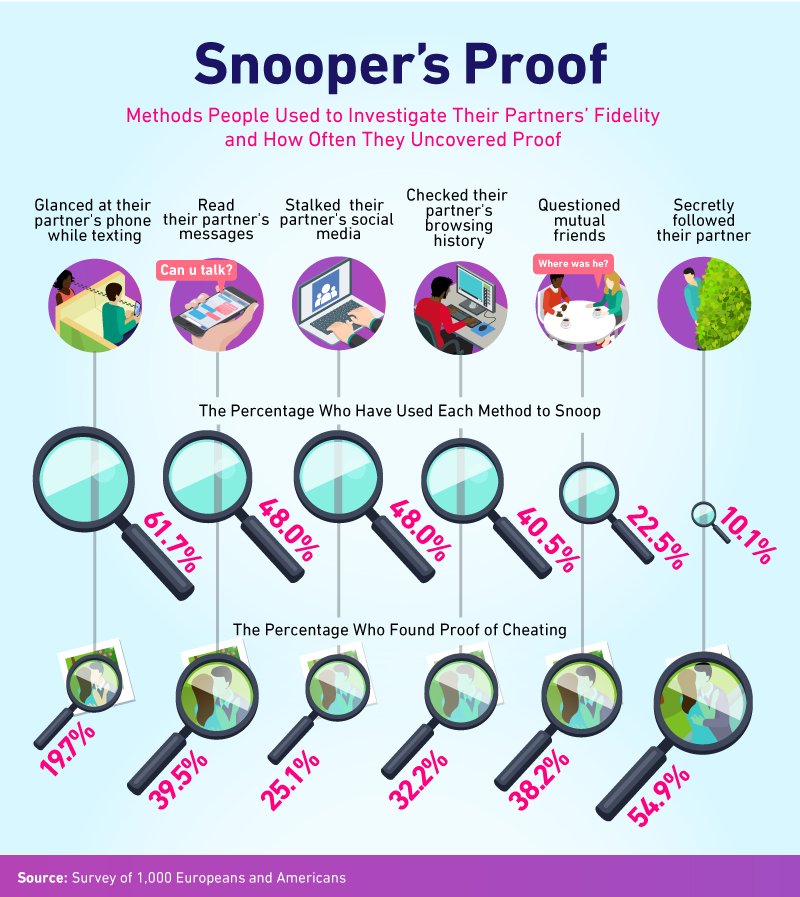 There were two main ways people privately assessed the loyalty of their partners. The first, which we looked at above, involved passively observing how they acted. The other involved active investigation – otherwise known as snooping, spying, and stalking (on social media, or even in person!).

We looked at six methods people used to check up on their partners, ranging from furtively glancing at their phone screens while they texted to physically following them without their knowledge. Seventy-nine percent of people admitted to using at least one of the six methods shown above to look for evidence of betrayal in a past or current relationship.

Regardless of what they eventually did or did not discover, more women said they snooped than men (82 percent versus 76 percent), and marginally more Americans than Europeans did the same (80 percent versus 78 percent).

This might sound like a relatively high success rate, but putting it in context (people who followed their partners were wrong almost half the time) paints quite a depressing picture. Millions of men and women have been and are followed by their partners, despite there being no clear reason to doubt their faithfulness.

Quite aside from its success rate at uncovering evidence, following one’s partner represents a commitment to investigating their loyalty that goes far beyond a casual and natural suspicion. Repeatedly following a partner, especially if it induces fear, is considered stalking and can have significant emotional effects. In less serious circumstances, it’s still a red flag that something in the relationship is wrong, even if there is a genuine cause for concern in the mind of the suspicious person.

After physically following a partner, the method with the next highest chance of producing proof that was also commonly used was reading a partner’s phone messages. On nearly 40 percent of occasions, the people who took this approach found some evidence of betrayal. While it may not seem as extreme as secretly following them, accessing a partner’s phone without their permission is nevertheless an offense in the UK according to the Data Protection Act 1998, although it’s currently only punishable by a fine.

Interestingly, although it was used slightly less, the old-fashioned act of questioning mutual friends had an almost identical rate of producing proof as checking a partner’s phone (about 38 percent).

Some people required very little reason to keep tabs on their partners’ activities. Nearly 8 percent read their partners’ texts over their shoulders without being suspicious at all, and 5 percent directly read their messages. Men were almost twice as likely as women to do the latter without first needing any cause for concern.

The Problem With Snooping 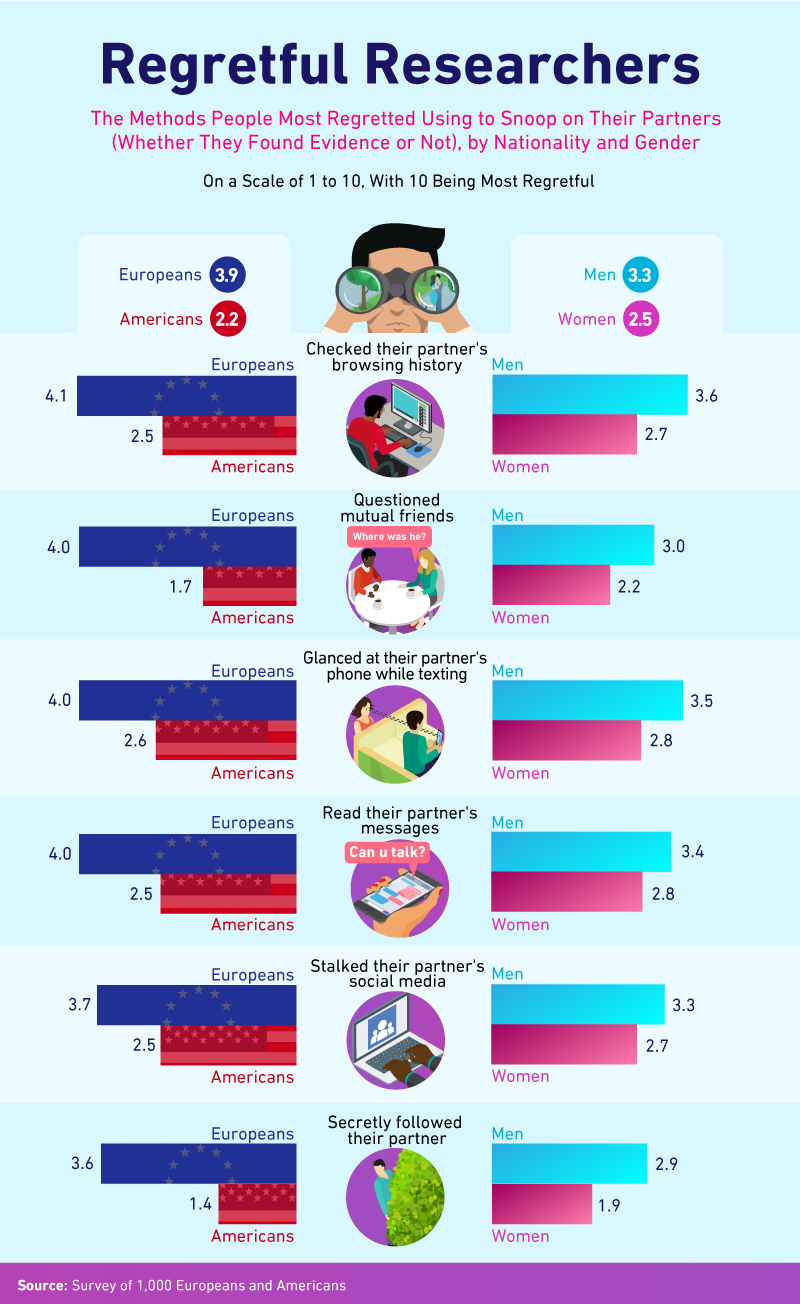 We asked people who snooped how much they regretted it on a scale of 1 (no regret at all) to 10 (most regretful). The average person rated their regret as a three, with Europeans showing more remorse (3.9) than Americans (2.2), and men feeling worse than women (3.3 versus 2.5).

The proportion of Americans who had zero regrets was double that of Europeans (41 percent versus 21 percent). Put another way, Europeans were 52 percent more likely to say they strongly regretted monitoring their partners (more than five on the regret scale) than Americans. 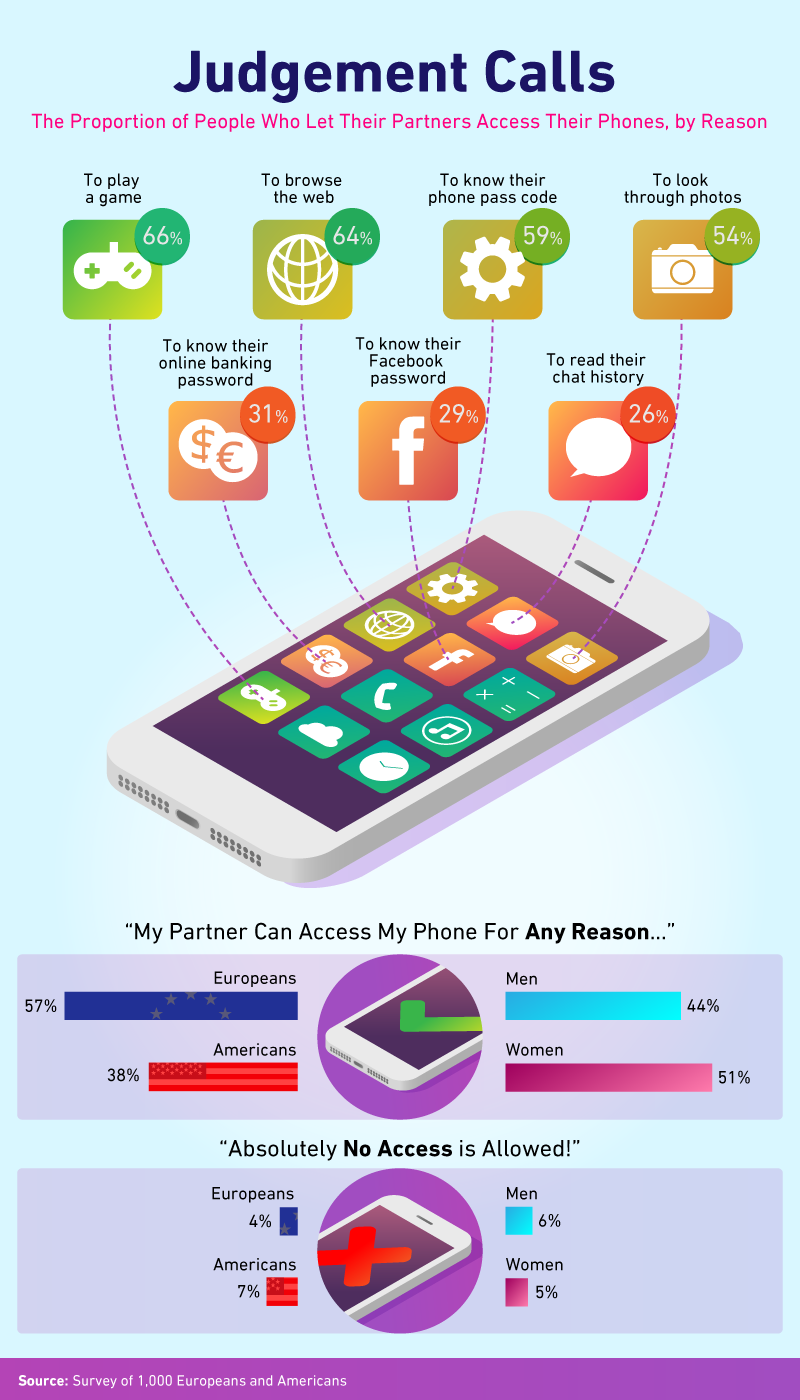 We’ve already determined the way that someone uses his or her phone can cause suspicion. 41 percent of people said a past or current partner didn’t allow them to use their phone for any reason, and around the same proportion found it highly suspicious.

The type of access people were the least likely to grant their partners was letting them read their messages. While there are plenty of reasons for someone to keep their messages private, we’ve also seen that – short of physically following them – reading a partner’s messages was the most reliable way of discovering proof of a betrayal (and, whether or not evidence is found,  it’s also a reliable way to breach a partner’s privacy and trust!). 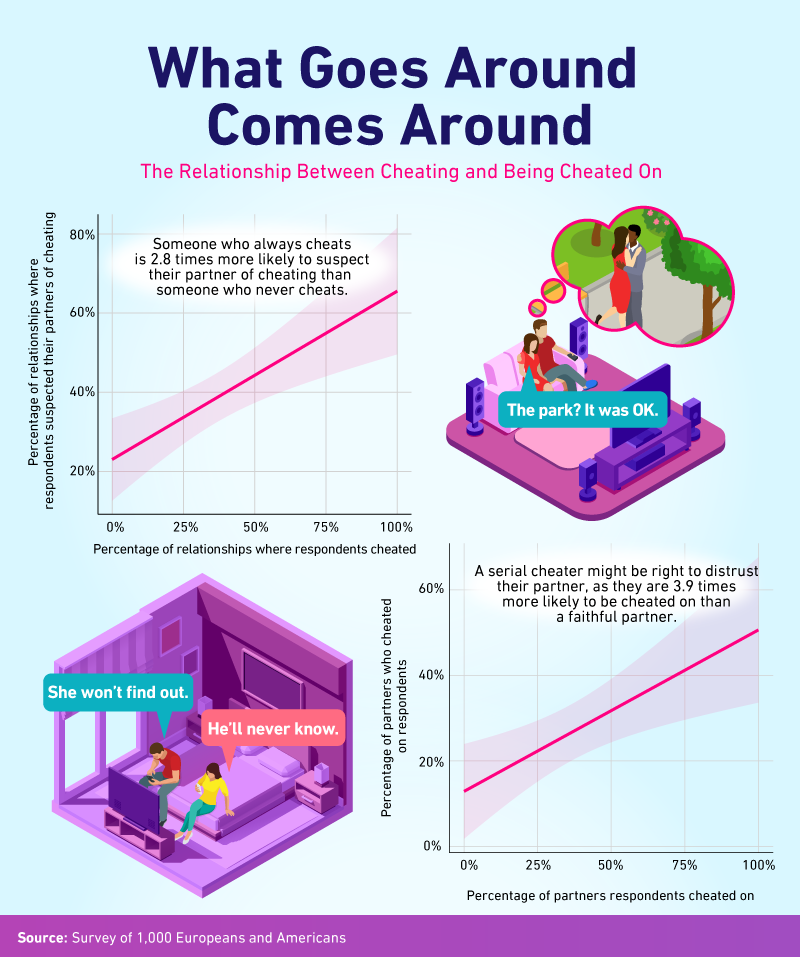 An interesting feedback loop exists in the world of cheaters. When we crunched the numbers, cheaters were significantly more likely to suspect their partners of betraying them. People who cheated in every one of their long-term relationships suspected two-thirds of their past partners of being disloyal.

Some of this paranoia could be projection: They know they’re cheating and, therefore, believe their partner could be too. But, according to our results, it’s also because cheaters tended to date cheaters. That person who cheated on every one of their long-term partners? They were 3.9 times more likely to have been cheated on than a non-cheater.

To some extent, then, cheating might seem like its own punishment, as serial love rats are cursed with suspicions about their partners, which – more often than average – are proven correct. Things are rarely as black and white as this, though. In their own minds, if no one else’s, people who stray aren’t always villains, and they often feel they have valid justifications for their actions. For instance, a recent study of Millennials published in the The Journal of Sex Research revealed “wanting more independence from your partner” and “feeling your partner is not meeting your needs” as two of the most common reasons for cheating.

The people we surveyed had more than 3,000 long-term relationships between them and recalled feeling suspicious of their partners in 37 percent of them. Fifty-nine percent of the time, they were right to worry, as eventually they discovered their partners were disloyal.

Is confronting your partner a good idea? According to our data, confrontations resulted in confessions 42.8 percent of the time. People who preferred to take the indirect approach (e.g., by snooping) only got a confession in 23 percent of cases.

It’s perhaps because getting an admission of guilt without damning evidence is so hard that 27 percent of people in our survey said they would consider using an app, like Snap Map or Find My Friends, to track the whereabouts of their partner (with 7 percent saying they’d do it even if they weren’t suspicious). Ten percent admitted to having already used a tracking app in the past. Tracking a partner via the location of their phone is a legal grey area in the States due to differences in law between states, while in Europe, a study of 20 secret tracking apps found three to be in breach of European data protection laws. If you are worried that you are being tracked without your permission, consider reaching out to the National Stalking Helpline for free advice on how to tackle the problem.

The emotional consequences of being cheated on can be devastating, but so too can the accumulating anxiety of worrying that your partner is cheating on you. That’s why it’s so important to communicate to them how you feel. If your suspicious thoughts are totally unfounded, a conversation can still take place about why you had them and how you can avoid feeling them again. Likewise, if your partner is unfairly suspicious of you, openly addressing the issue before considering snooping is always the best idea.

Dealing with the physical consequences of cheating is different. Over 14 percent of Europeans and nearly 17 percent of Americans in our survey discovered their partners were cheating by catching an STI. If you’re worried about the possible medical consequences of cheating, the services of Superdrug Online Doctor are there to help you understand the health risks and treatments. Fast, totally confidential, and straightforward – we’ll aim to get you on the right track.

We surveyed 1,000 Europeans and Americans and asked them a range of questions about their relationship histories, as well as how they would feel if they noticed certain unusual behaviours and events that can be indicative of cheating.

Feel free to share our findings for noncommercial purposes only. To remain beyond suspicion, please link back to us to give credit where it’s due! For any questions regarding this project, please email us at [email protected].