Sexually transmitted diseases are a difficult and embarrassing topic to talk about openly. The stigma and isolation that can come with having an STD makes it particularly challenging for people to reach out and find information about it. Many people understandably turn to the Internet, anonymously searching for the help they need.

So how many people have been using the web to find facts about STDs, and where do they come from? Using data on search queries from SEMrush and Google Trends, we’ve compared the per capita rate of STD-related searches originating from the United Kingdom (UK) and the United States (US), quantifying which STDs are the most commonly searched.

One key regional difference is in the STDs that receive the most attention. Chlamydia is the most searched disease per capita in the UK, reflecting its status as the most diagnosed in 2013; chlamydia comes in second to herpes in the US. In the UK, both herpes and genital warts are tied for second place.

Our analysis of search queries also focuses on which nations across Europe generate the most searches per capita for various STDs. The regional variations can be quite illuminating, as well as the possible reasons behind them. 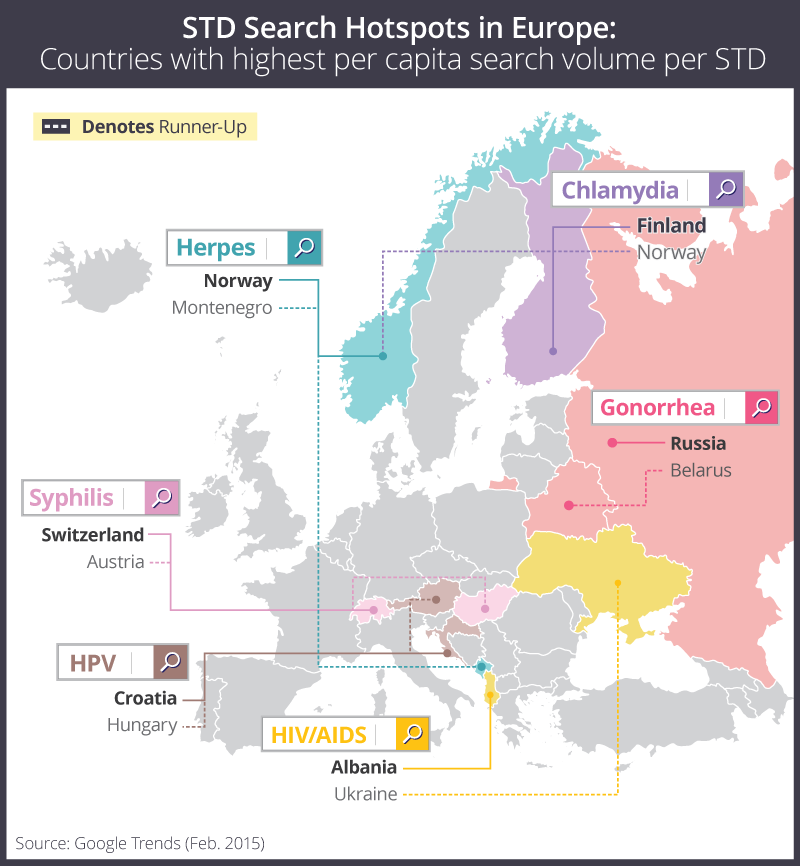 Albania shows the most searches per capita for HIV or AIDS, and it’s not surprising that Albanians would turn to the web for information: As of 2011, only 2% of Albanian healthcare facilities provided screening for HIV. Meanwhile, the runner-up nation of Ukraine is suffering from one of the worst AIDS epidemics in Europe. And as antibiotic-resistant gonorrhea has spread from east Asia to Europe over the past decade, Russia shows the most searches for this condition. The neighboring nation of Belarus places second and recently showed high levels of resistance to antibiotics among gonorrhea strains. Switzerland has seen a recent increase in syphilis cases as of 2010, including congenital syphilis transmitted from mother to child. And as of 2014, 18% of Croatian women are estimated to have certain subtypes of human papillomavirus (HPV), while women in Hungary also have high levels of HPV.

Just as certain European nations stand out in their interest in information about STDs, various US states also rank the highest in searches for different diseases. Mississippi and Louisiana take first place and runner-up for half of the STDs tracked: gonorrhea, chlamydia, and syphilis. Given that Mississippi had the highest rates of both chlamydia and gonorrhea out of all 50 states in 2012, it’s easy to see why they’re doing the most searching. Meanwhile, the District of Columbia isn’t just first in the nation for HIV and AIDS searches – it also has the highest HIV/AIDS rates by far. 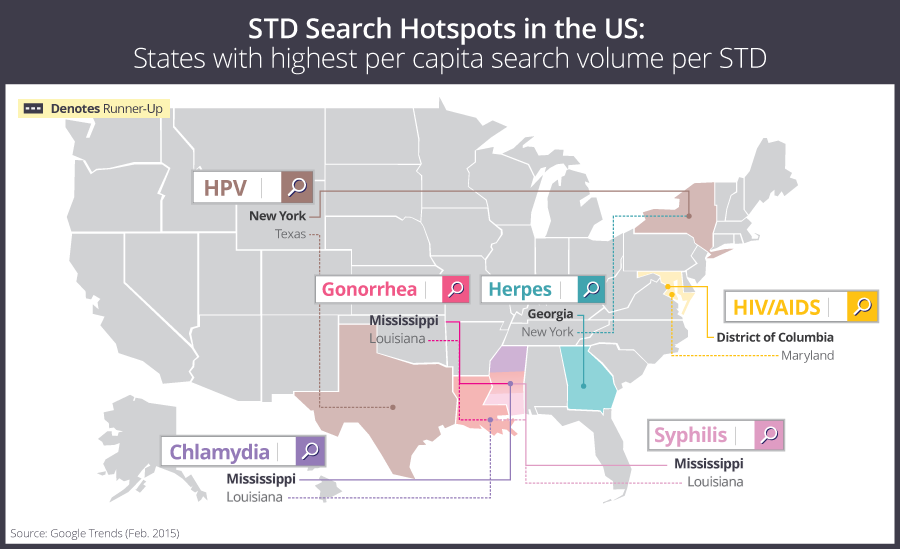 We’ve seen which STDs are the most searched and where. But what does this look like over time? Has the volume of searches for different STDs fluctuated over the years for different countries?

Search Prevalence of Syphilis Throughout the UK and US

Syphilis is consistently more frequently searched for in the US than the UK, and it’s rising over time as the incidence of syphilis in the US has doubled since 2000. The city of New Orleans ranks first in the US and experienced the nation’s highest syphilis rates as reported in 2012. But even the UK has seen a slight increase in syphilis searches over time as numerous outbreaks of syphilis have occurred in Wales, Northern Ireland, and elsewhere since 2011. London saw a rise in syphilis in 2005, and by 2007, syphilis cases in Glasgow had skyrocketed. 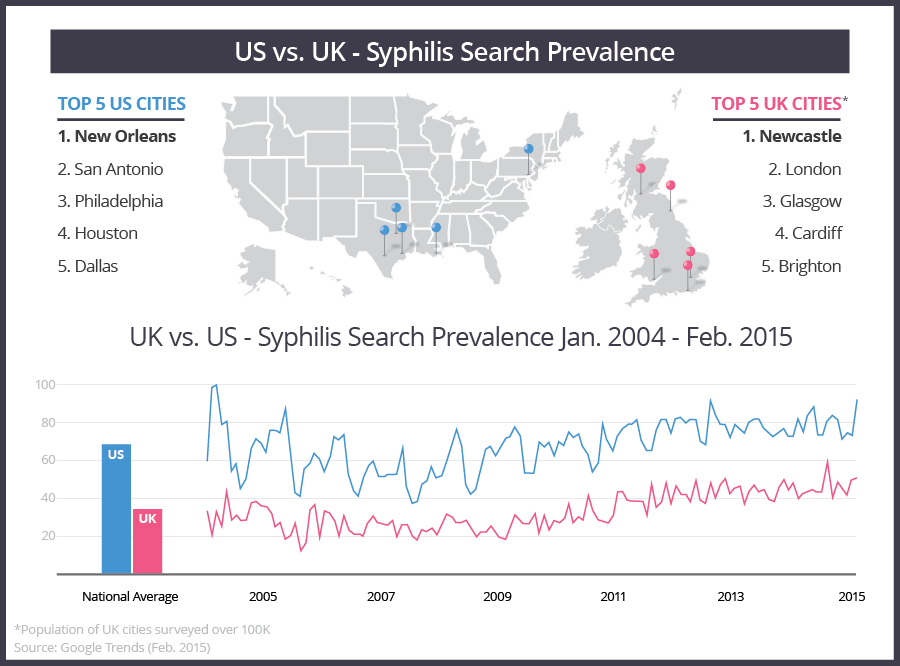 Search Prevalence of Chlamydia Throughout the UK and US

For chlamydia searches, both the UK and US seem roughly in line with one another over the years. However, the UK saw a mild spike in chlamydia searches around 2010, as news broke that more STDs were being diagnosed in the UK due to increased screening of youth for chlamydia. And in 2009, London was described as the “chlamydia capital” of the UK.

Search Prevalence of Gonorrhea Throughout the UK and US

The US consistently has a higher rate of gonorrhea searches than the UK, with a substantial spike around October 2010. In this case, the trend has very little to do with the disease itself – the album I Am Not a Human Being, including the track “Gonorrhea,” by Lil Wayne debuted in September 2010. 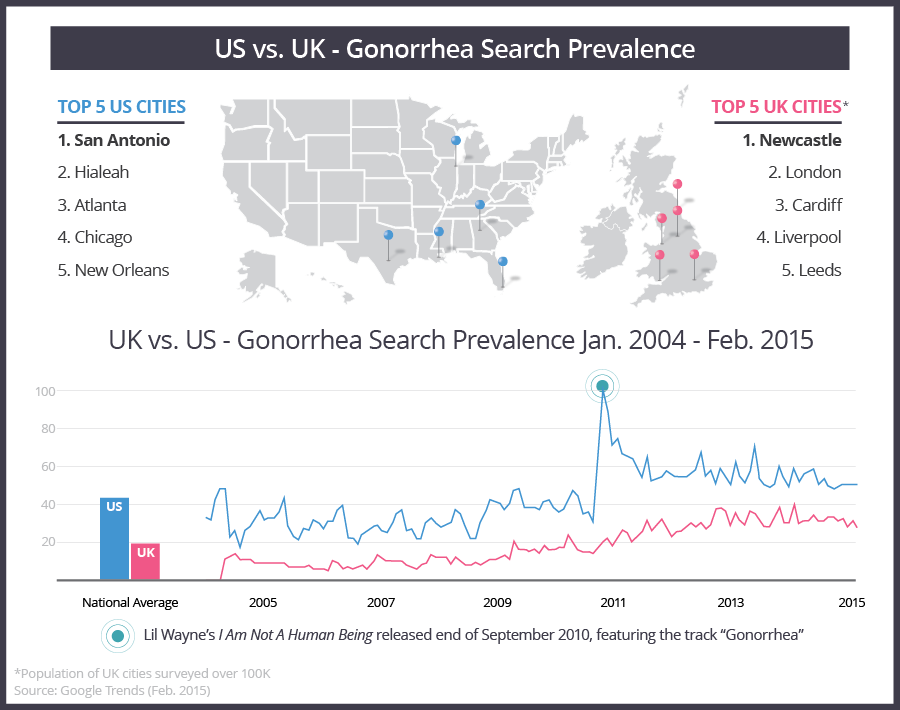 Cyclical Interest in Gonorrhea Around the World

What’s behind this cycle? A 2007 study from the University of Texas-Houston Health Science Center may offer some clues . By analyzing US Centers for Disease Control and Prevention data on sexually transmitted diseases from 1999 to 2003, they found major seasonal peaks in cases of chlamydia, syphilis, and gonorrhea. The authors speculated that these spikes, found in March, May, August, and November, could be due to increased activity by youth during spring break as well an annual rhythm that sees an increase in young men’s testosterone during the end of the year.

Search Prevalence of Herpes Throughout the UK and US

Herpes searches are similarly more common in the US, with a spike in early 2009 that coincides with the announcement of new discoveries from Harvard Medical School for possible treatments of herpes. 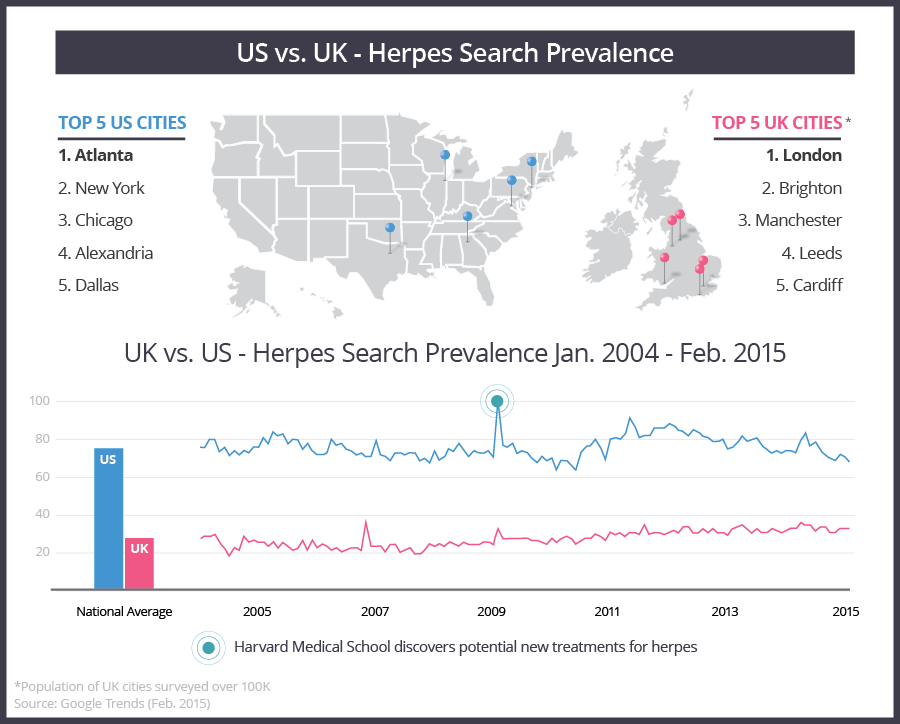 Search Prevalence of HIV/AIDS Throughout the UK and US

As the world has seen a decrease of almost a third in HIV infections and AIDS deaths from 2001 to 2013, searches for HIV and AIDS declined significantly in both the UK and US. 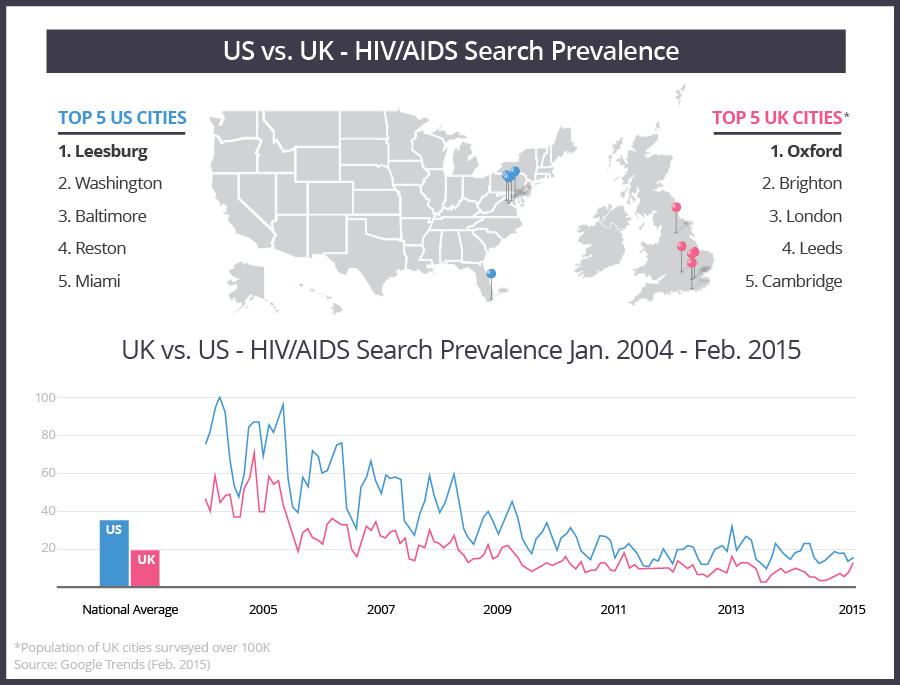 UK and US Searches About STD Exposure

As people seek out information about sexually transmitted diseases, they’re often curious about the particular ways that they could be exposed to a given STD. It may seem obvious from the term, but people understandably want to be very clear on the details. We’ve looked at data on search queries from people wondering whether they could contract certain STDs from various personal or intimate acts, ranging from sitting on a toilet seat to kissing and oral sex. 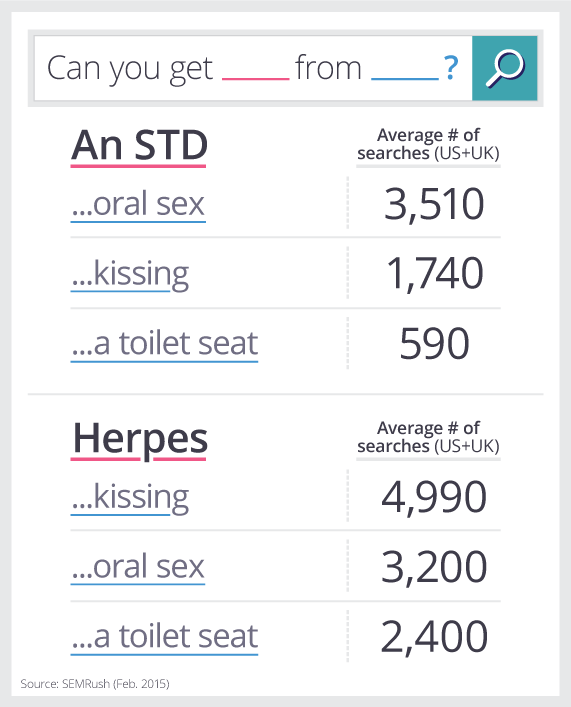 While many people seek out information on whether STDs in general can be contracted from oral sex, even more are interested to know whether herpes specifically can be transmitted via kissing. Herpes is also a particularly concerning STD when it comes to other potential modes of transmission, with about half as many searches for catching herpes via toilet seats as there are searches for catching it via kissing. For the record, several STDs can indeed be caught from oral sex – when it comes to these diseases, it does count as sex – but the Mayo Clinic describes transmission via toilet seats as “nearly impossible”.

When a man suffers from erectile dysfunction or premature ejaculation, it can be an embarrassing experience. And when a man has questions he’s too embarrassed to ask anyone else, he turns where any person would in a time of such an issue: Google.

We’ve analyzed search query data across Europe to find out which nations are searching the most for these sexual dysfunctions, as well as treatments such as Viagra and Cialis. 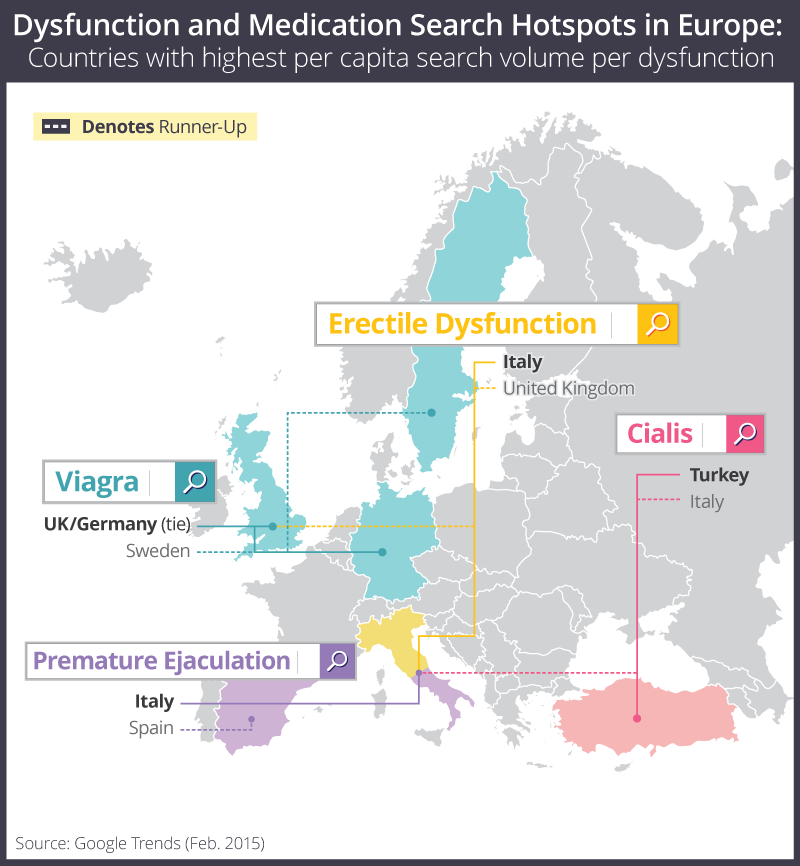 As the active ingredient of Viagra (sildenafil) became available in a generic form in Germany in 2013, the country became one of the top sources of searches per capita for this common erectile dysfunction treatment. And over a million men in the UK now use Viagra, as of 2014, after the price dropped drastically.

When it comes to searches for sexual dysfunctions and treatments in the US, there seems to be a clear association with age. The states with the highest number of searches for Viagra, Cialis, and erectile dysfunction have an older than average population, and according to the 2010 census, Florida and West Virginia have the highest and second-highest percentage of senior citizens, respectively. 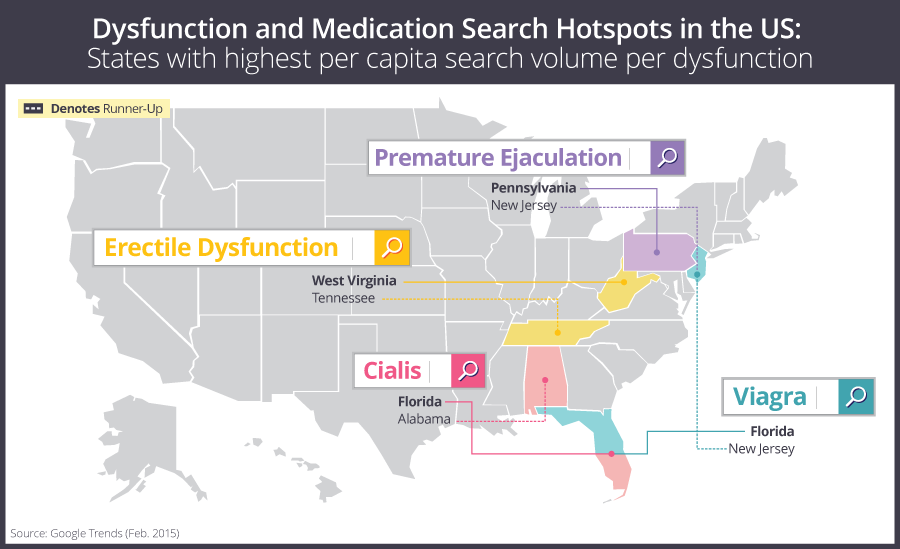 UK and US Searches for Erectile Dysfunction and Premature Ejaculation

Below are statistics we gathered on just how many searches are made for various terms and phrases related to erectile dysfunction, impotence, and premature ejaculation, with comparisons between search volumes for the US and the UK. 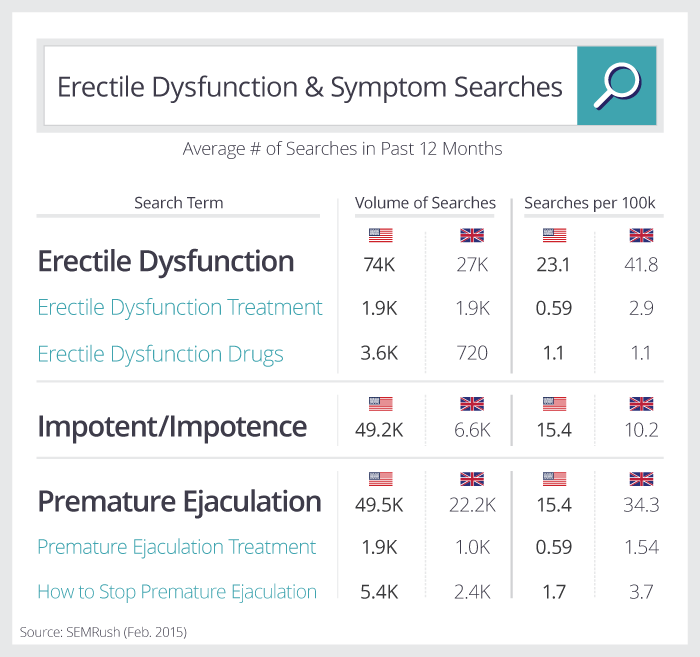 Sexual topics can be a difficult subject for anyone to discuss, especially when it comes to diseases and sexual dysfunctions. Yet behind this silence, the data show that these health issues are surprisingly common, and many people around the world are struggling with the discomfort and stigma of these conditions.

These issues can be very personal, but they’re often as manageable as any other health condition. While it may be embarrassing to deal with, onlinedoctor.superdrug.com is ready to provide you with private and discreet care for conditions such as STDs, erectile dysfunction, and premature ejaculation. You aren’t alone, and you can find the help you need at onlinedoctor.superdrug.com today.

Data on the quantity and origin of search queries on both the national and local level was obtained from Google Trends and SEMRush. When these data were provided in absolute numbers rather than per capita prevalence, the prevalence was calculated using the most recent available population data for each nation. To present combined search data from the past year, decade, or other longer period of time, monthly search query volume was averaged.

Statement of Fair Use

Feel free to use the images found on this page. When doing so, we ask that you please attribute its creators by providing a link to onlinedoctor.superdrug.com and this page so your readers can learn more about the project, its methodology, and the sources used.