Who would you ask?

Sexual topics, including sexually transmitted diseases, can be very personal and sensitive issues. While these are important questions of safety and health that can affect anyone, people often feel too embarrassed or self-conscious to discuss them openly. For some, the only place they feel comfortable asking these questions is nearly anonymous advice websites. Enter Yahoo! Answers.

Launched in 2005, Yahoo! Answers has become one of the leading sites for questions and answers on almost any subject. Over 40,000 questions about sex and STDs asked by Yahoo! Answers users in six countries have been analysed, measuring which topics are the most frequently mentioned. Take a look at the findings to see what the world is asking about sex- and STD-related subjects. 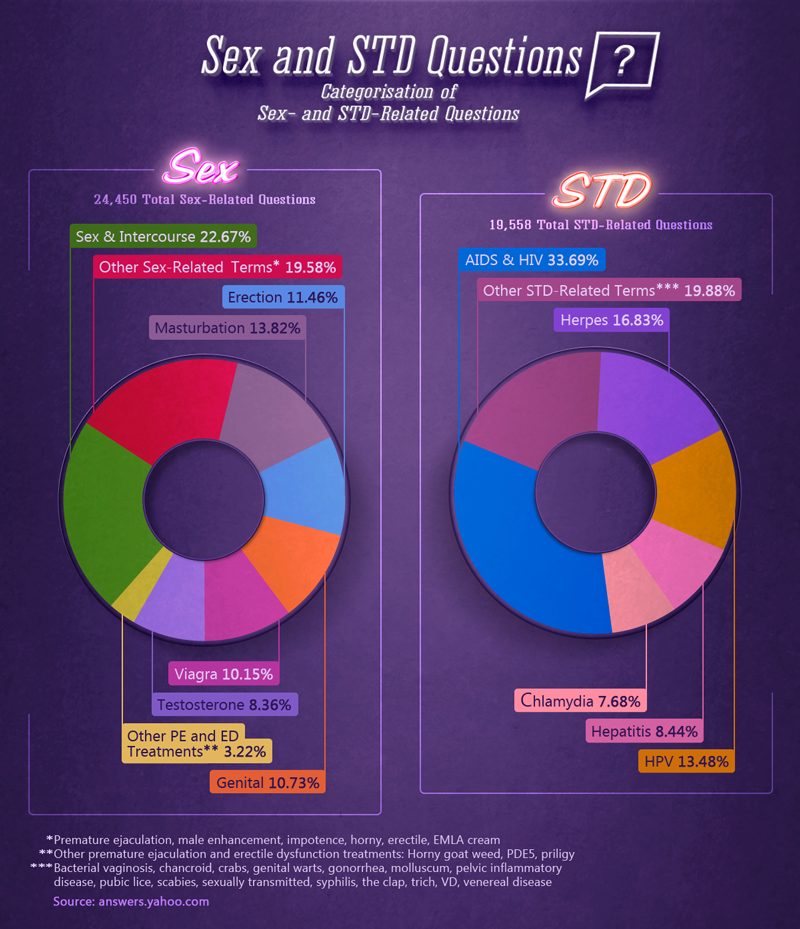 As for questions about STDs, the topic of HIV/AIDS seemed to loom large in everyone’s mind, with nearly a third of questions focusing on AIDS and HIV. The runner-up was a catch-all category encompassing a variety of other STD-related terms, including gonorrhea, genital warts, syphilis, and many more. Herpes was the second most common specific STD discussed, at 16.1%, while HPV – human papillomavirus – was the subject of 12.9% of questions. Considering the harmful and potentially fatal consequences of some of these diseases, it’s troubling to think that many people are turning to anonymous individuals for advice on how to stay safe. 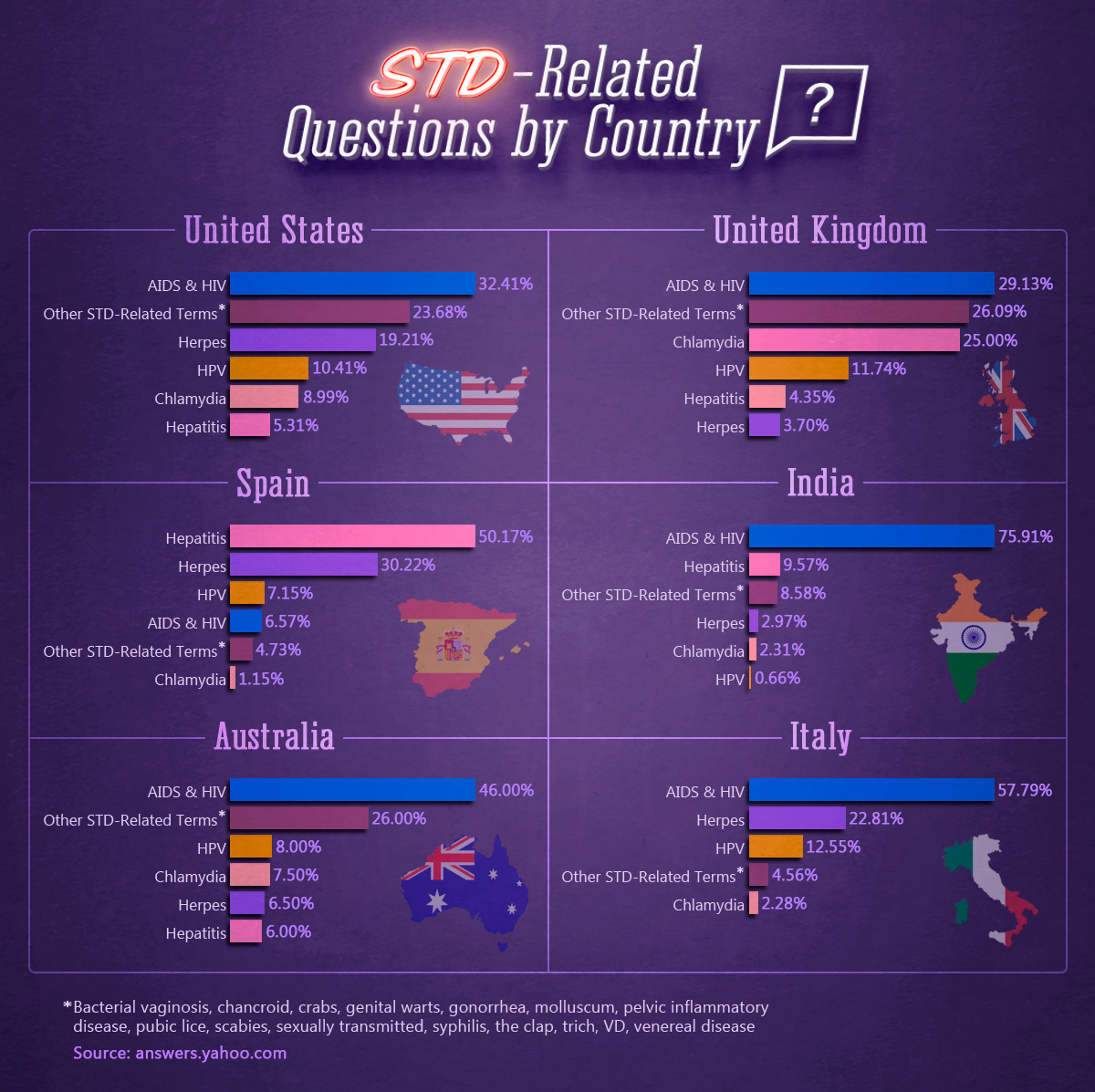 We also looked at the prevalence of different categories of questions by country, including the United Kingdom, United States, Australia, Spain, Italy, and India. We found that there are some major differences in what various parts of the world are most curious about.

For STD-related questions, HIV/AIDS places first in the U.K., U.S., Australia, Italy, and India – and proportionally, India shows the greatest concern, with HIV/AIDS taking up nearly three-quarters of all of its STD questions. According to the United Nations, India also has the third-highest number of people in the world living with HIV. However, in Spain, where tens of thousands of people are living with hepatitis C, over half of questions are dedicated to hepatitis.

These nations also show variations in their questions about sex in general. Questions about intercourse itself only place first in two countries, the United States and Australia. The U.K. shows the most interest in a variety of other terms, such as impotence, premature ejaculation, and anaesthetic creams designed to help with premature ejaculation. 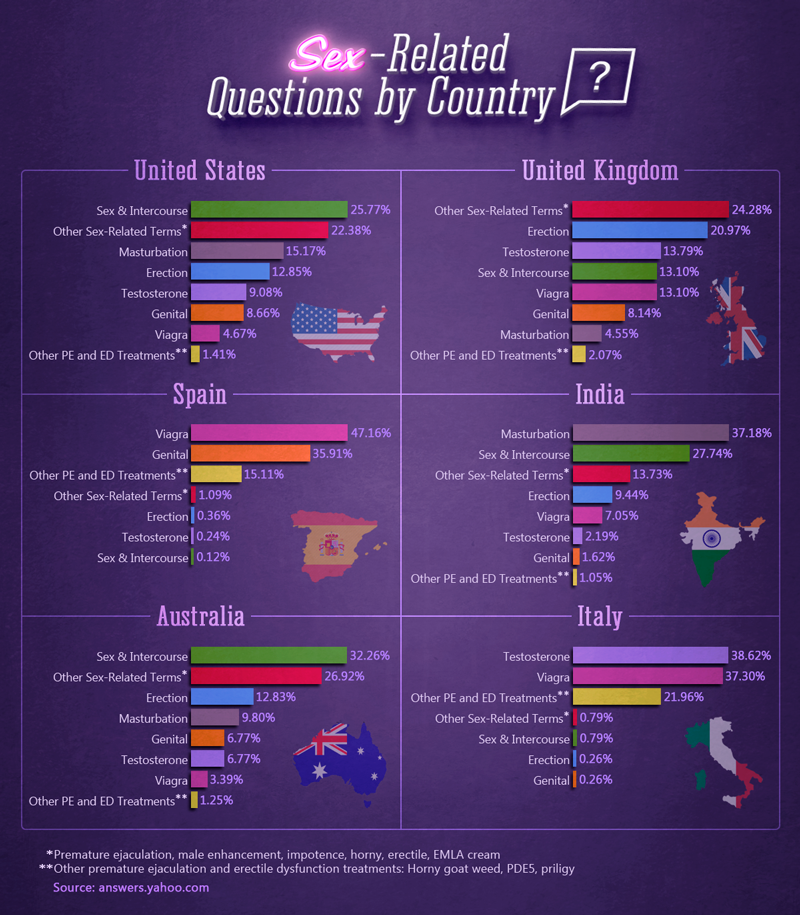 Meanwhile, Viagra takes up nearly half of all sex questions in Spain, where Viagra was described as a “recreational drug” in 2007, and police have recently broken up drug rings selling counterfeit Viagra. And in Italy, after patents recently expired on Viagra allowing it to become much more affordable, the drug is the subject of more than one-third of questions. 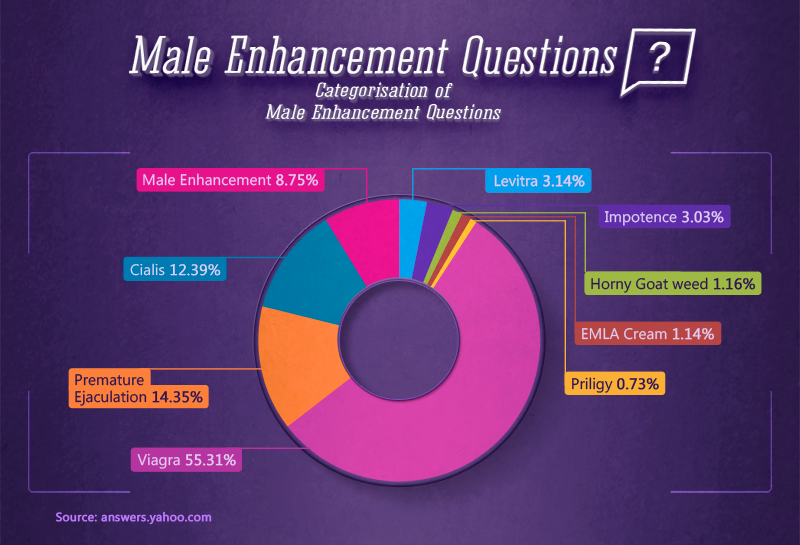 Given that male enhancement is a substantial interest among people asking about sex, we looked at this area specifically and found which male enhancement-related topics were the most common. Unsurprisingly, the ED drug Viagra has become almost synonymous with male sexual potency, taking up more than 55% of questions. Questions about premature ejaculation placed second at 14%, while another ED drug, Cialis, came in third. These ED drugs are extremely well-known – yet Priligy, one of the first prescriptions for premature ejaculation, only took up 0.73% of questions. 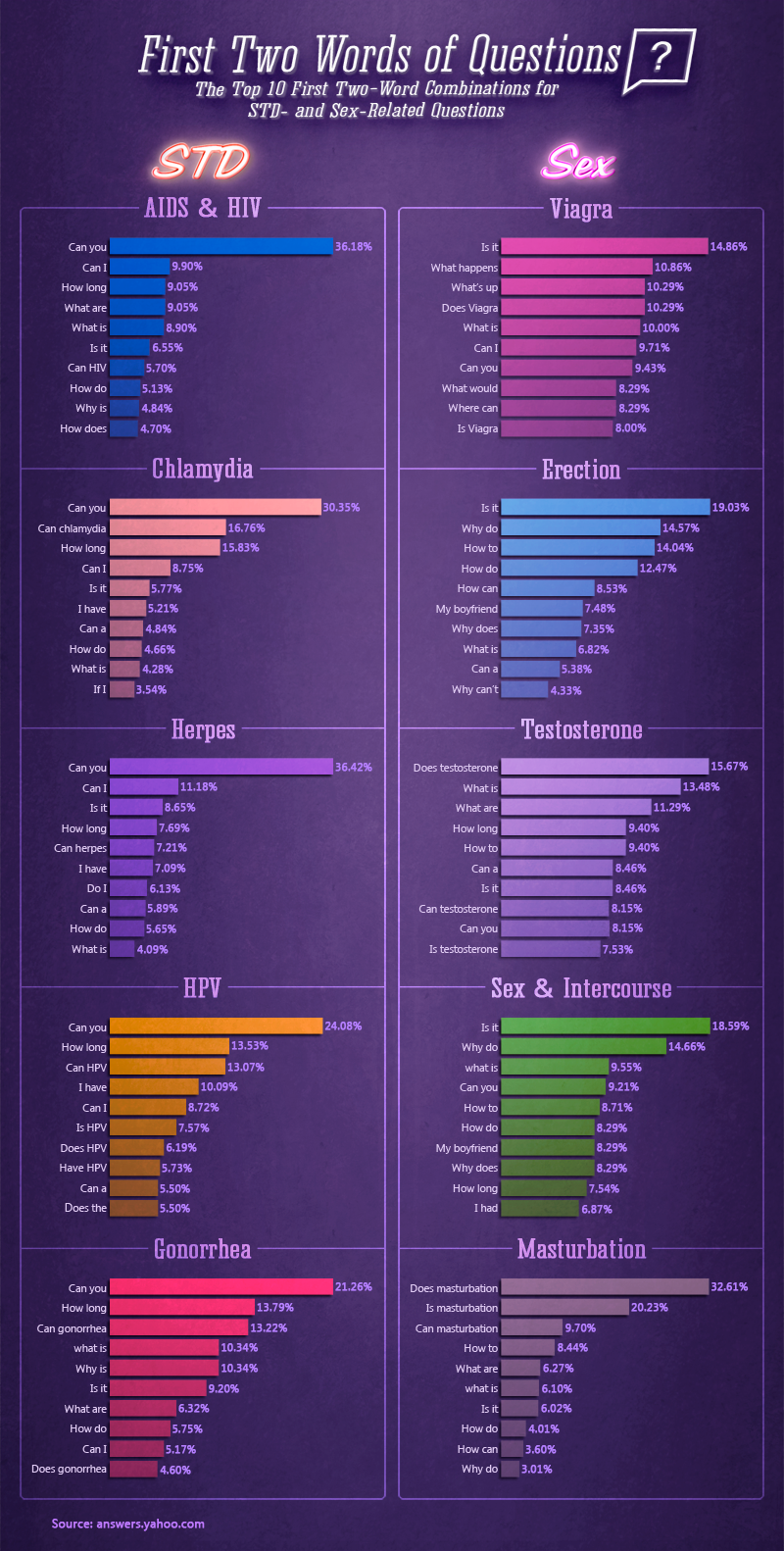 Finally, we examined the ways that people talk about these subjects on Yahoo! Answers and looked at the first two words most commonly used when asking questions on various topics. Among five major STDs – HIV/AIDS, herpes, gonorrhea, chlamydia, and HPV – the most common opening phrase was “Can you,” likely reflecting curiosity about the ways these conditions can be transmitted. “How long” also placed highly among these STDs, suggesting that people are asking about the time needed until a given condition is detectable.

People around the world have countless unanswered questions about topics relating to sex and STDs, and they often don’t know where to go. When it comes to your sexual health, your safety and well-being are too important to be left to anonymous advice. Superdrug Online Doctors offer quality information on conditions such as erectile dysfunction, premature ejaculation, and STDs, as well as potential treatments. Visit onlinedoctor.superdrug.com today to find the answers you’ve been looking for.

Superdrug Online Doctors commissioned us (Fractl) to investigate how people are using the web to ask intimate questions. We scraped a total of 40,008 questions from Yahoo! Answers that matched a variety of keywords related to sex, sexual health, and sexually transmitted diseases. Our search was limited to only questions asked since 2007. We broke down the results from the six countries that asked the most questions: the United Kingdom, the United States, Australia, Spain, Italy, and India. We segmented these results into groups by topic and selected the first two words from the questions in each group to determine which phrasing occurred most frequently.

This research is intended primarily to entertain and shows that people are asking very intimate questions online. Superdrug Online Doctor supports the reuse, rehosting, and discussion of these assets and results. We ask that those doings so link to onlinedoctor.superdrug.com and this page so that consumers can learn more about this research and have access to all available assets.