When it comes to time spent between the sheets, discovering what you’re interested in, what you dislike, and what you still want to try all changes with time. But what if your personality traits had something to do with the intimate adventures you or your partner might be interested in giving a go? Before you start to worry about what your partner might be secretly lusting after, or begin to question your own interests, we’ve got a few clues for you to consider.

Don’t know your own type already? Take the test here before continuing on to find your your personality type (and perhaps your sexual preferences)! 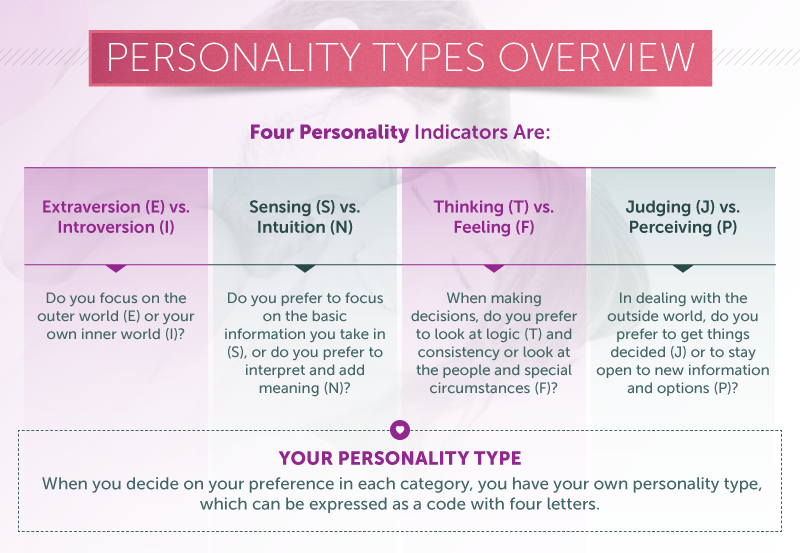 Before we get into the exciting stuff, there are a few terms we’ll be referencing throughout this sexploration. There are the four personality indicators in each type.

It’s important to note that no personality trait or set is better or worse than another. All are equal and should only be used as a tool to understand and appreciate the differences between people and the seemingly random variations in our behaviour.

If you’re unfamiliar with your own letter personality type, our guide helps break down the core differences between each type. By picking the personality indicator that most aligns with how you see yourself, you’ll come up with the four characters we’ll be referencing throughout this study. For example, someone who aligns with extrovert, sensing, thinking, and perceiving would be considered an ESTP. Take a moment to assess each of these indicators before proceeding. 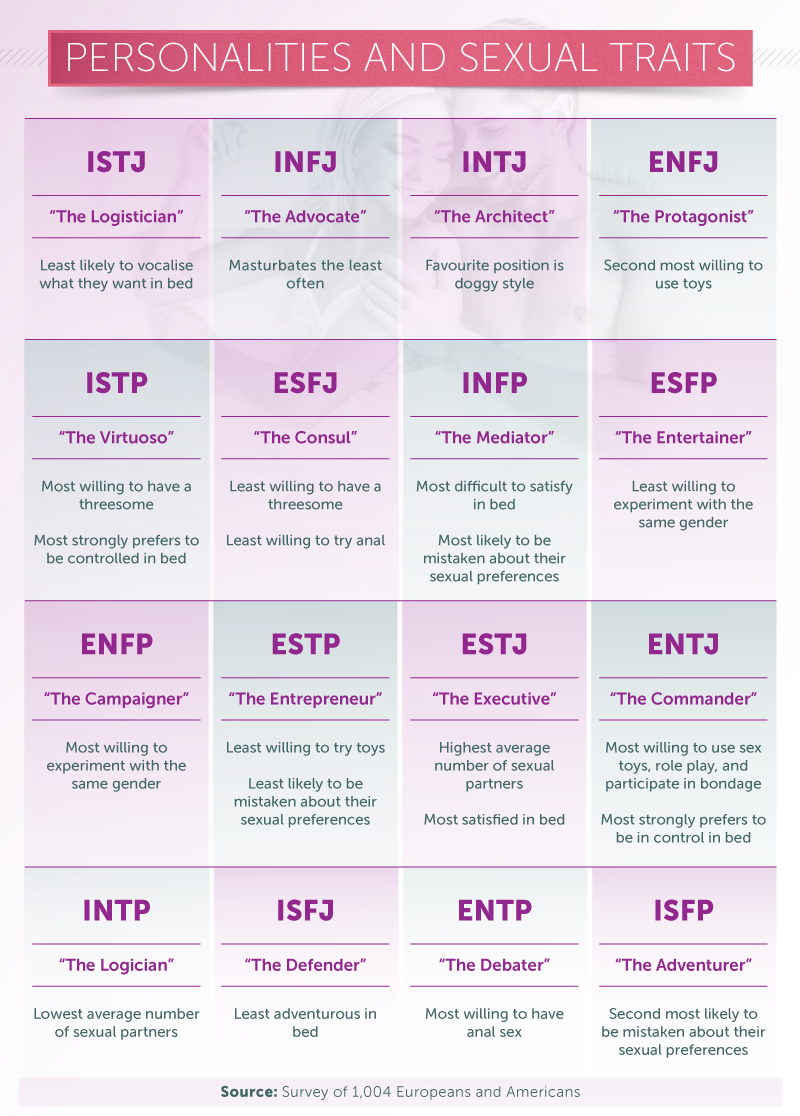 Regarding some of the sexual differences between the 16 four-letter personality types, we’ve compiled responses of over 1,000 sexually active European and American men and women. Take a look at the chart above to see what we learned about each personality type and what your indicator could say about what you (or your partner) most and least enjoy in bed. 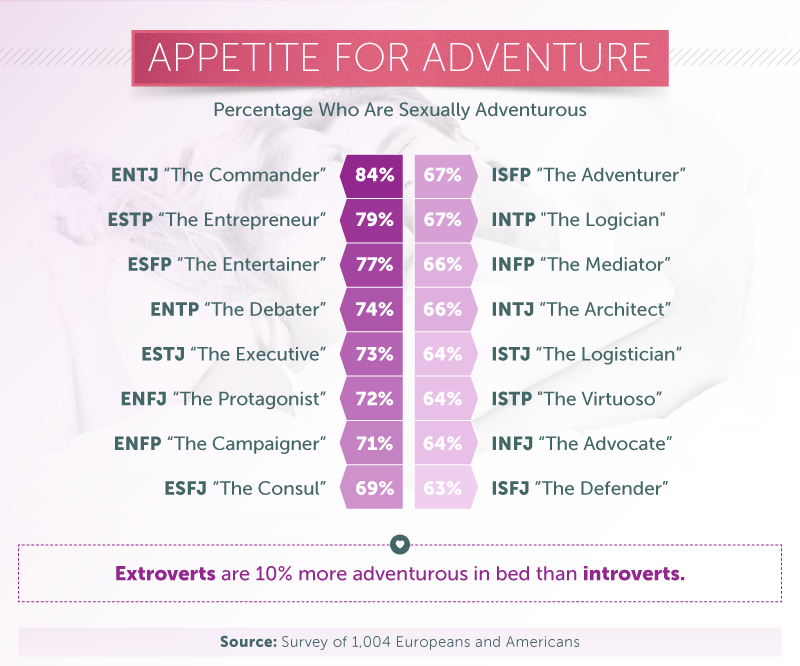 Keeping things fresh in the bedroom can often play a key role in avoiding sexual frustration. Still, it’s important to recognise that what qualifies as adventurous in bed isn’t the same for everyone, and without proper communication, there’s room for misaligned expectations.

According to our survey, extroverts were 10 percent more adventurous than introverts in bed. The three most adventurous types, ENTJ (the Commander), ESTP (the Entrepreneur), and ESFP (the Entertainer), all share extraversion, which makes them more outgoing, quicker to jump into new scenarios, and energised by active involvement. If that doesn’t sound like you, don’t worry. Introverts and extroverts can be very compatible in bed, and some experts suggest introverts may begin to pick up more outgoing personality traits the more time they spend with extroverted lovers.

Introverts, including ISFJ (the Defender), INFJ (the Advocate), and ISTP (the Virtuoso), rated themselves the least sexually adventurous. While these types are considered reflective and reserved, there are still sex positions that won’t make introverts feel entirely outside their comfort zone. Positions where you might not make eye contact, but still combine the physical closeness of cuddling or spooning, might be the perfect way to make an introvert feel safe and sexual at the same time.

There are plenty of opinions on how much sex is the right amount. While there is some truth to the “use it or lose it” mentality where libido is concerned, people with different personality types reported varying degrees of sexual frequency.

Extroverts were 17 percent more likely than introverts to report frequent sexual activity. ESTJs (the Executive) had the highest sexual frequency (67 percent), followed by 61 percent of ENTJs (the Commander).

With only sensing and intuition attributes swapped, ENTJs had twice as many sexual partners, on average, as ESTJs. Intuition types are typically more interested in the future and are more excited to try new things compared to people who align with the sensing attribute.

Both ISTP (the Virtuoso) and INTP (the Logician) had the lowest self-reported sexual frequency while ISTP, INTJ (the Architect), and ENTP (the Debater) had the smallest number of sexual partners on average. Both personality types share the perceiving attribute, which makes them more open and flexible to spontaneous activity, but still decisive and organised in their actions. 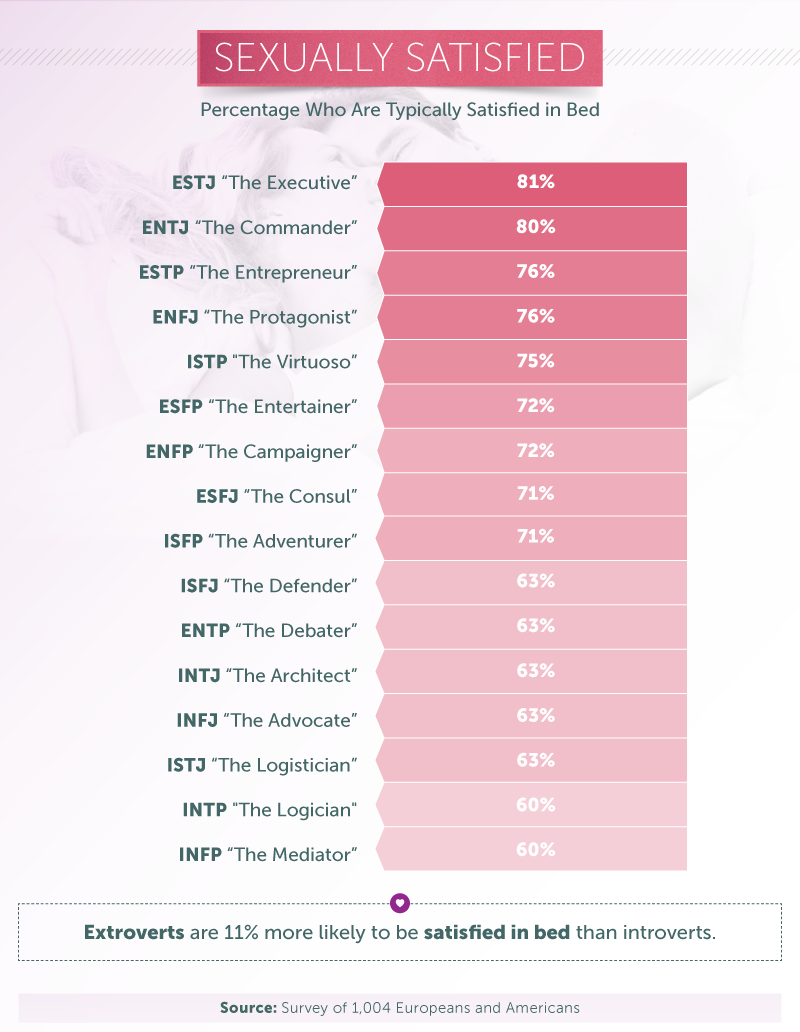 With so many personality types and sexual preferences to consider, you might wonder who’s easier to satisfy: someone who’s more adventurous and active or someone with less experience?

As it turns out, there’s an argument to be made for having more sex or experimenting with new positions. Extroverts were 11 percent more likely than introverts to be satisfied in bed. While they were less likely to consider their sexual thirsts quenched in the bedroom, it’s not impossible for introverts to find intimacy and physical fulfilment.

Seen as sometimes being too reflective and less action-oriented, introverts spend a lot of time thinking and less time interacting with the real world. If you or your partner align with introversion, communication could be even more vital for sexual satisfaction. No matter how old you are or what stage your relationship is in, talking about what turns you on may seem scary, but it has the potential to unlock new levels of sexual satisfaction for all parties involved. 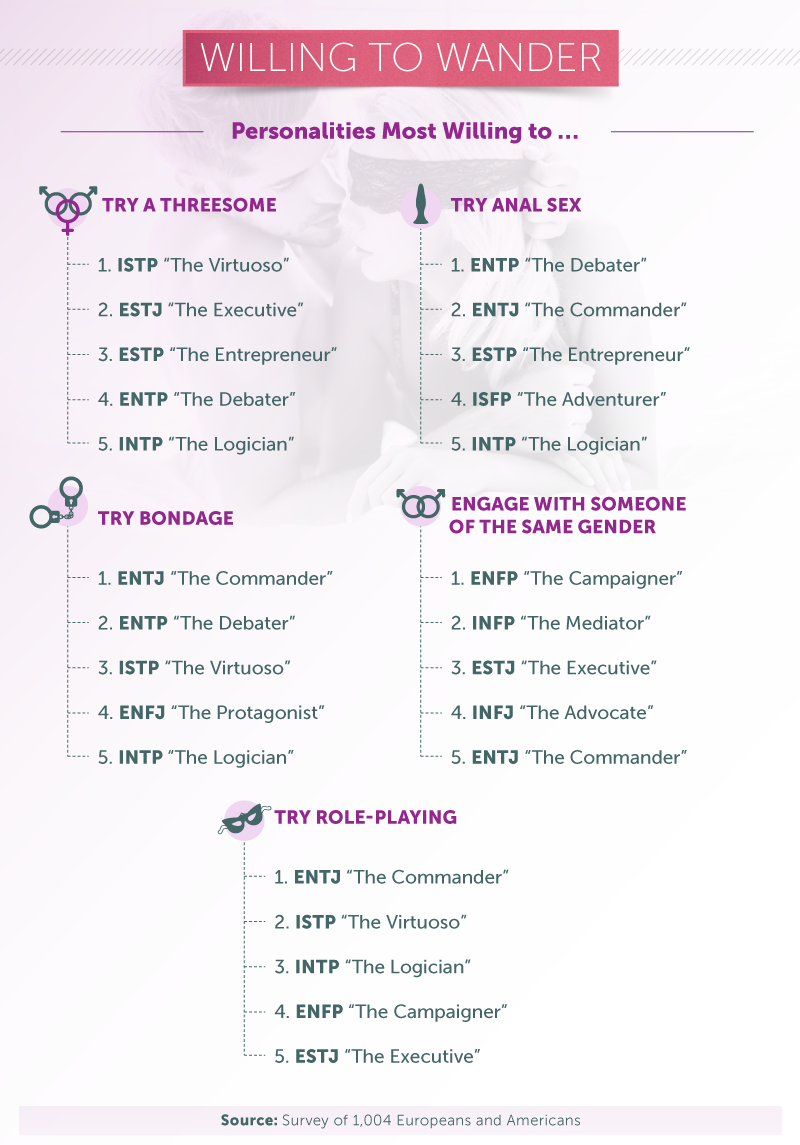 If you’re looking to try something a bit more sexually stimulating, your personality type might have a suggestion for you. Introducing these sexual activities into your relationship requires open, honest conversation and should never feel forced. 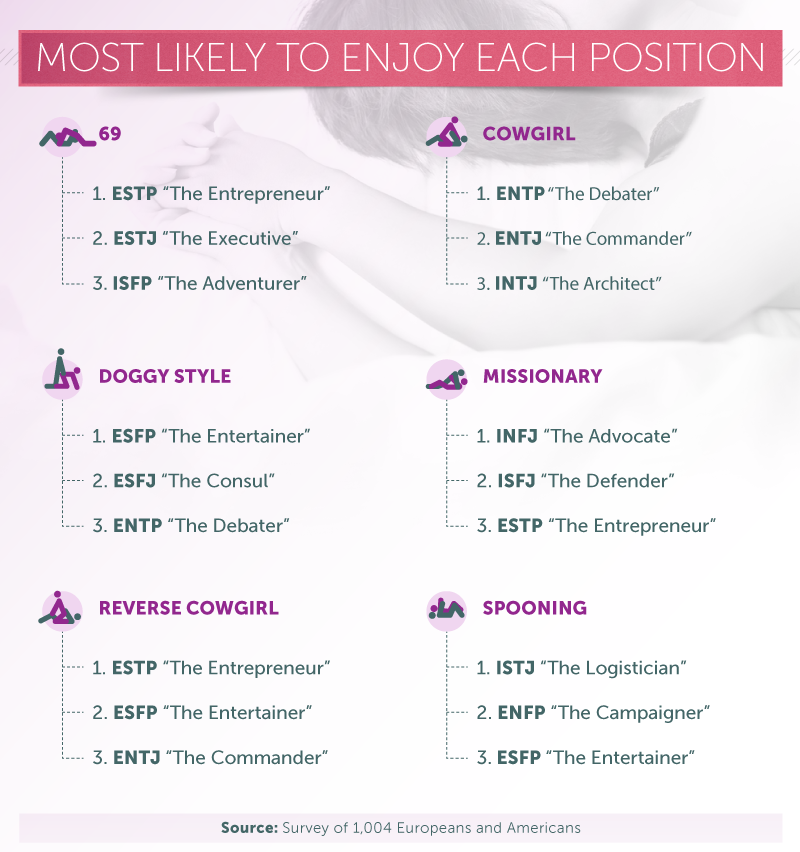 Depending on the mood you’re in, or what you’re trying to accomplish, the most popular sexual positions offer physical stimulation in addition to mental and emotional intimacy. As we learned, some personality types may be more tempted by certain positions than others.

Oral sex is one thing, but oral sex on both partners simultaneously is something else. ESTPs (the Entrepreneur) identified 69 as their favourite sexual position. Considered an intense position, there are multiple variations on 69 (including standing up, laying down, or laying sideways) that can make it more thrilling (and comfortable) for both parties.

Doggy style, which puts the power back in the standing partner’s court, also offers varying degrees of intensity. Whether you prefer a slow and gentle pace, or you’re both interested in experimenting a bit more, doggy style has options and was a particular favourite of extroverts including ESFP (the Entertainer), ESFJ (the Consul), and ENTP (the Debater).

No matter how old you are or what relationship you’re in, what qualifies as sexually stimulating is different for everyone. As people polled revealed, our four-letter personality indicator could play a role in how sexually active, adventurous, and willing we are in bed. Each of the 16 personality types ultimately revealed different sexual preferences and philosophies towards the act, reaffirming there are no right or wrong ways to approach sex. With the right communication and willingness to listen, couples can find a balance between what excites them and their partners most.

No matter what gets you hot and bothered, Superdrug Online Doctor is your go-to resource for your sexual health needs. By eliminating the hassle and embarrassment of visiting a physician, our online doctors can help you identify the medication you need and have it delivered right to your door. Never let embarrassment stand between you and sexual satisfaction again. Order now and have your medication ready when you need it at Superdrug Online Doctor today.

It is possible that with more participants, we could have gained more insight into European and American respondents. The data we are presenting rely on self-reporting. Statistical testing was performed where applicable, but most of the claims listed above are based on means alone. As such, this content is purely exploratory.

We know your type. If our study gets you excited, feel free to share it with your readers for any noncommercial use. Just play fair and make sure to link back to this page, so our contributors get credit for their work too. Questions or comments? Email them to [email protected].