How Common Is Male Body Positivity?

Body positivity typically refers to a social movement that seeks to empower individuals to find worth beyond their physical appearance and size. The public focus of the movement has mostly been on women, due to the prevalence of societal expectations and representations of women’s bodies. However, a Google Image search of the term yields virtually no men. This begs the question – is male body positivity common?

We recently spoke to 1,004 people in the US and UK who identified as male and asked them to share with us how they feel about their bodies. They told us what they envisioned as being the ideal male physique in 2021 and how close or far they felt from their own standards. The men also shared the mental health implications involved with their own self-image. Interesting differences across age groups surfaced as well – keep reading to see everything we found.

Our study kicked off with a stark look into how men felt about the way they looked. They were asked to agree or disagree with a few statements about body positivity, which we then compared by age. We also created an average ideal height and weight based on respondents’ answers regarding their ideal heights and weights. 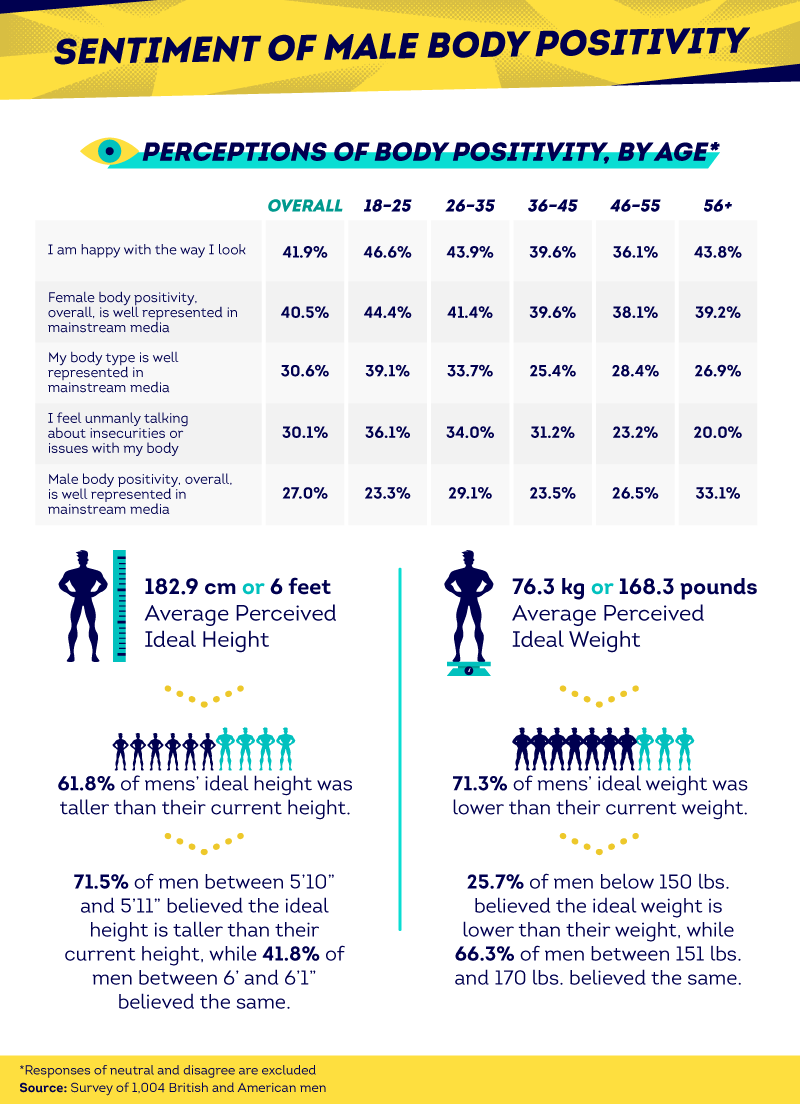 In a very discouraging first statistic of the study, we found that only 41.9% of men can say they’re happy with the way they look. And while they may have been willing to share this insecurity anonymously, 30.1% agreed that they felt “unmanly”, in other words self-conscious and unconfident, trying to discuss any issues they had about their bodies. According to licensed counsellor Tara Vossenkemper, men are less encouraged to share their emotions, and have a higher tendency to “brush it off.” Perhaps this “unmanly” feeling respondents described is one barrier to emotional body image discussions.

The average ideal male height and weight, according to respondents, was 6 feet tall and 168.3 pounds. For most, this was taller than their own height, and for even more, it was lower than their own weight. In other words, most men wanted to be taller and slimmer. There did seem to be hope in ageing, however, as the oldest respondents we spoke to were also the happiest with the way they looked.

Diving deeper into how good or bad men felt they look in 2021, we asked them to rate their own attractiveness on a scale from 1 to 10. Their answers were then broken down by age. 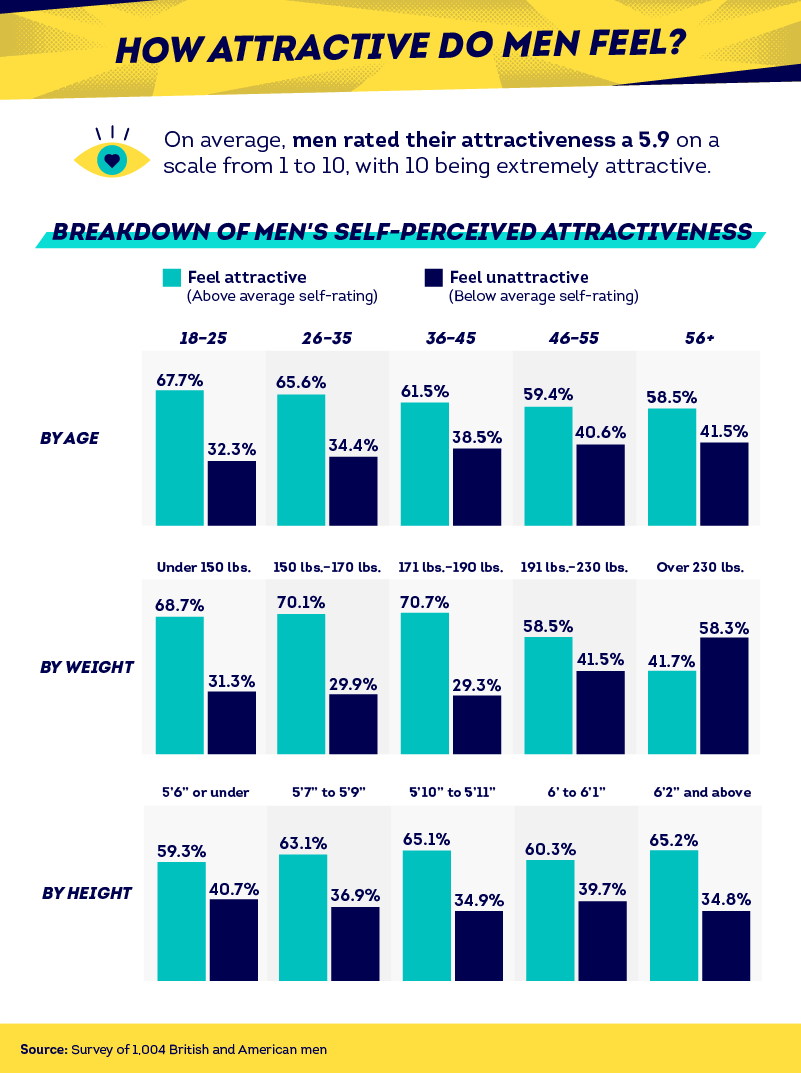 The average man would rate themselves a 5.9 on their attractiveness scale. While these numbers were likely to wobble with age and with weight, men of all heights seemed equally capable of finding themselves attractive. Nearly as many men who were 5 feet, 6 inches tall or under found themselves attractive as those 6 feet tall and above. But when weight gain occurred, men’s self-image started to plummet. Heavier respondents were much less likely than others to feel that they were attractive. While age made people feel less attractive, remember that it also made respondents feel happier with – and perhaps more accepting of – the way they looked.

On the subject of male body image, the “superhero stereotype” often surfaces. Aptly named, the superhero image refers to exactly that. We asked men if they felt pressure to look like superheroes, which superheroes they wanted to look like, and which body parts they presumed women and society to find most attractive in superheroes.

While most men didn’t feel the pressure to look absolutely perfect, it was not uncommon for men to feel the opposite. Twenty-eight per cent of respondents sensed societal pressure to look a certain way, namely the “superhero” aesthetic. When we asked the men to get more specific, most said they wanted to look like Captain America, and that women were most likely attracted to superheroes’ abs.

Men of all ages seemed to understand that this superhero physique was not natural or realistic, though it became even more obvious as men grew older. Actors that portray superheroes often have to undergo extreme physical challenges even to maintain the physique long enough to film, and fortunately, most men understood that to recreate the look would likely be unrealistic. That said, 41.4% of 18- to 25-year-olds believed these types of results were attainable.

When men felt less than good, what were they feeling insecure about? The next piece of our study answers this question and compares top insecurities by age. Here, we also start to examine the impact these insecurities have on male mental health. 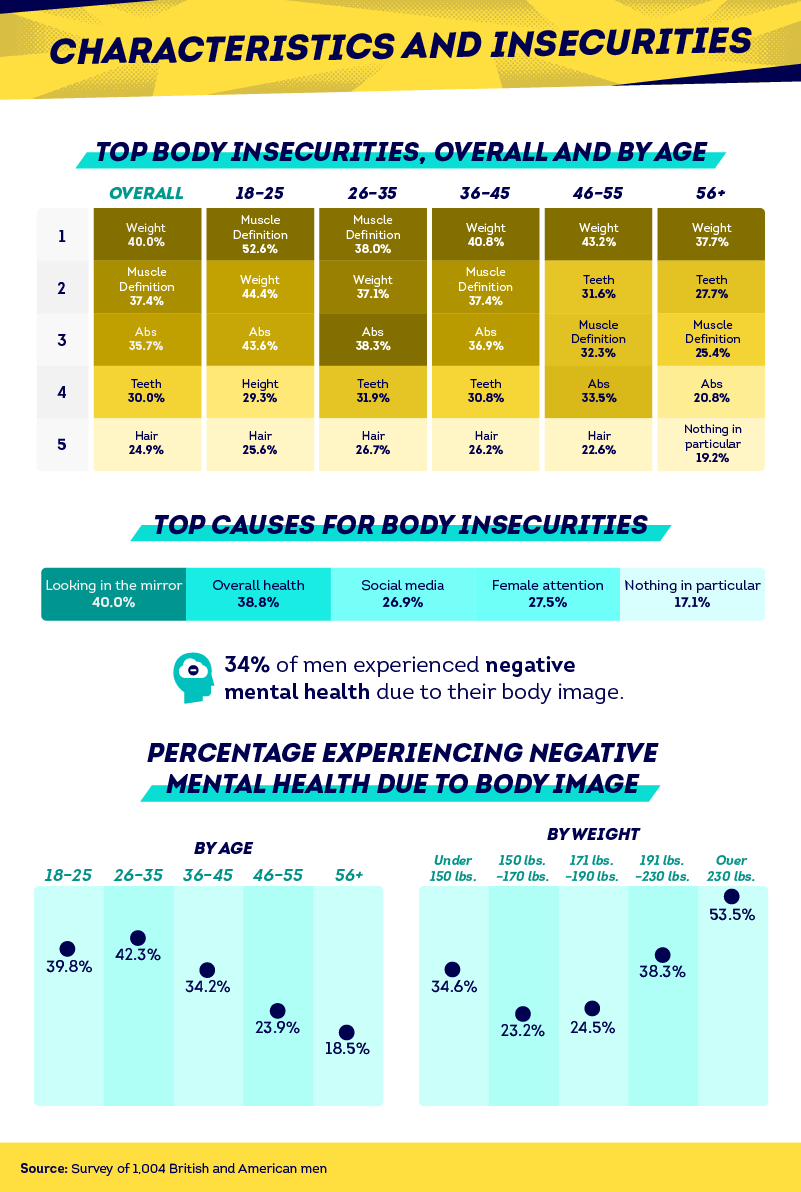 For mostly younger respondents (those 35 and under), muscle definition was the number one insecurity. Once middle-age took hold, respondents’ insecurities shifted more commonly to weight. That said, weight gain is more common with age as well, as age makes unburned calories more likely to be stored as fat. Nevertheless, weight gain had serious implications for a man’s mental health. More than a third of those who weighed over 190 pounds agreed that they had negative mental health experiences because of their looks, while more than half of those over 230 pounds felt the same way.

And while much of female insecurity is thought to be driven by air-brushed magazine images, most men felt their insecurities were organically created. More than half (55.2%) agreed that the top source of their own insecurity was simply looking in a mirror. Only 26.9% said the same thing about social media. Regardless of shape or size, more than a third of men were currently experiencing negative mental health because of their concerns over their physical appearance.

Our study concluded with a look into how all of these emotions surrounding body image have been translated into action. We asked respondents to share their health habits, from fitness routines to product choices. 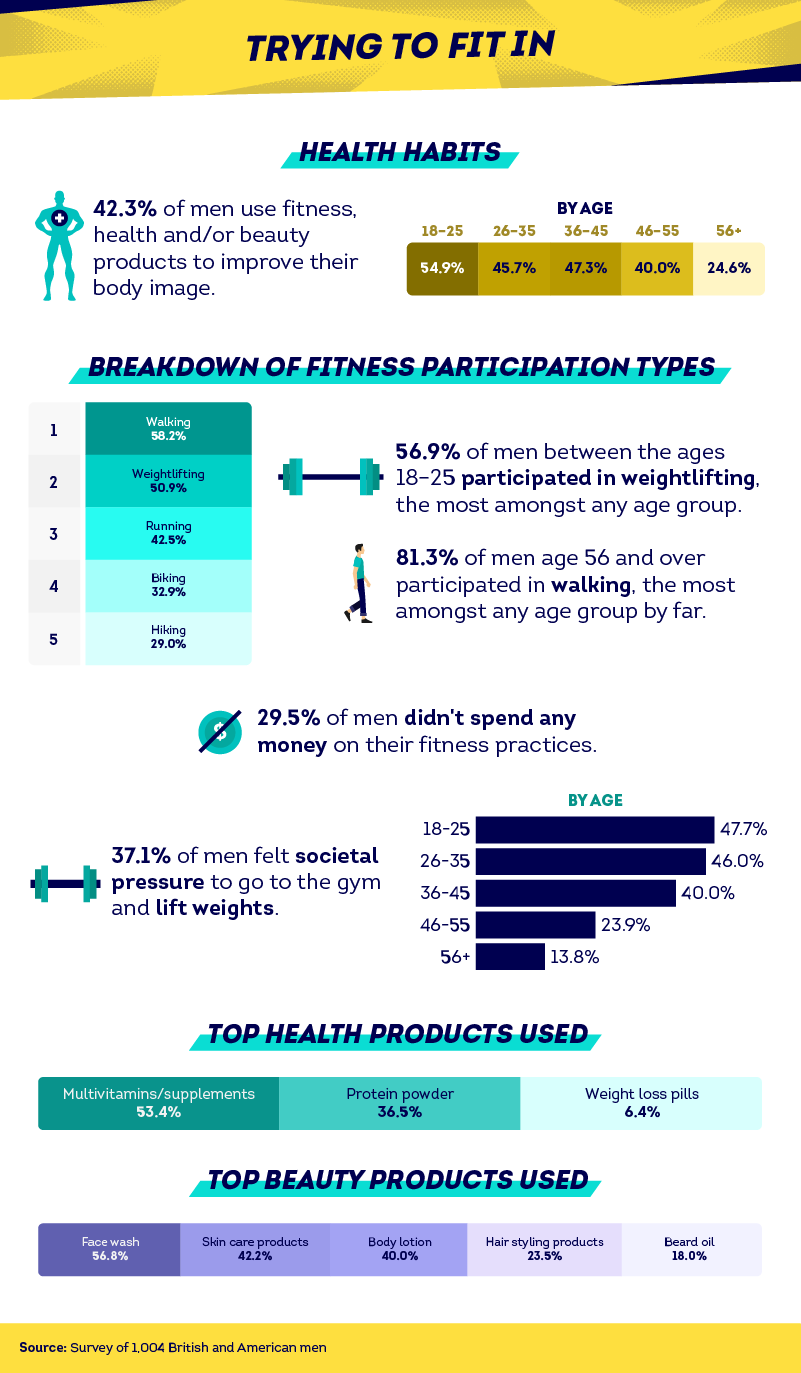 Purchasable products were a common go-to amongst those feeling insecure about their looks. The younger that respondents were, the more common this behaviour was. Most were taking multivitamins and supplements (53.4%), protein powder (36.5%), or even weight loss pills specifically (6.4%). The U.S. weight loss market was estimated to total a record $72 billion in 2019, suggesting the popularity of products like these on a larger scale.

Fortunately, most people were turning to healthy activities, like walking, to take control of their health. Weightlifting was also a common approach amongst men, as was running and biking. Beauty products were a lot less common – only 23.5% used hair styling products of any kind, and fewer than half used body lotion. These numbers may climb in future years, however, as the male beauty industry has been steadily growing, and is projected to continue to do so.

Respondents quickly revealed two important things: First, physical insecurities amongst men are incredibly common; and second, these insecurities can be detrimental to their health, particularly when those insecurities have to do with weight. Respondents also revealed, however, that insecurities persist even amongst those with “ideal” weights and shapes. It’s ultimately an inward reflection that needs to change more than any outward appearance.

Superdrug Online Doctor is your constant, reliable, safe space to work on positive inward reflection. The community and knowledgeable health care professionals online are always ready to work with you on any health goals that you may have, physical or mental. If you have any health questions, concerns, or needs, head to Superdrug Online Doctor to see how we can help you today.

The main limitation of this study is the reliance on self-report, which is faced with several issues such as, but not limited to, attribution, exaggeration, recency bias, and telescoping.

Body positivity isn’t always easy to talk about, but you can help get the conversation rolling. Feel free to share these facts and this research. Just please be sure that your purposes are noncommercial and that you link back to this page.