Relationship experts largely agree honesty is one of the most fundamental aspects of any romantic relationship. If you want to create a long-term future with one another, you have to be able to trust that what you’re each saying and feeling is true.

But is it always that simple? Lying is a quintessential human behaviour, so is it realistic to expect that you’ll always be able to tell each other the truth, even when it might hurt someone’s feelings or make them feel bad?

To understand the truth behind the lies we’re sometimes guilty of telling the people we love, we surveyed over 1,000 people about when they’ve misled their partners and why. Read on as we peel back the layers behind the complicated reality of being honest in a relationship. 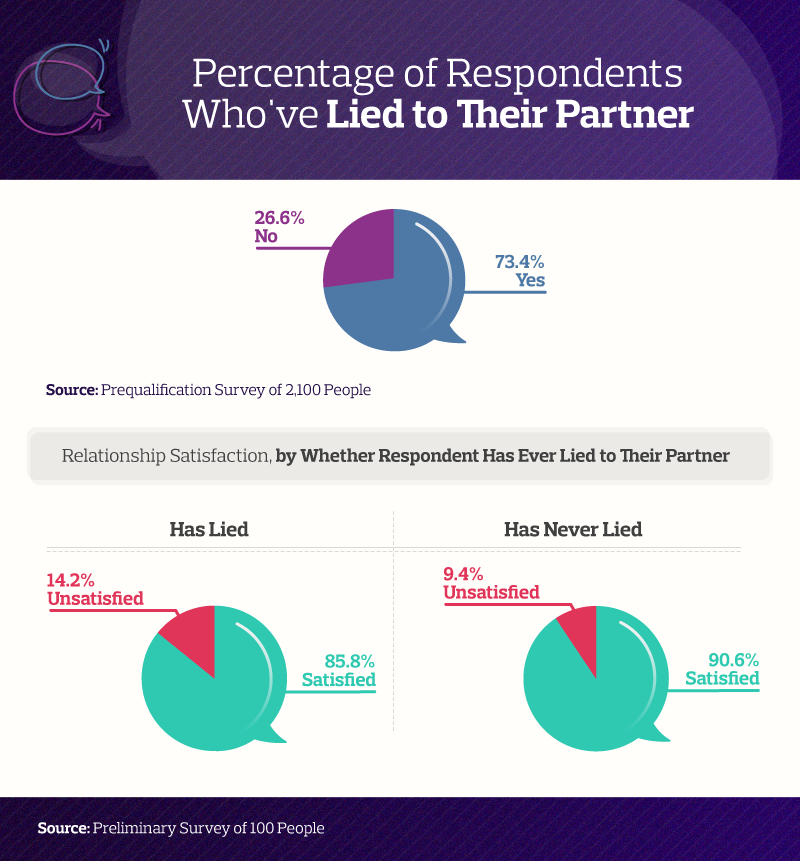 It’s important to acknowledge that everyone lies. No matter who you are (or who you’re dating), everyone is guilty of bending, concealing, or otherwise disregarding the truth. When reflecting on your workday, 60 percent of co-workers probably told you a lie at some point during a normal 10-minute conversation.

So how often do we bring those tendencies home with us? Around 73 percent of people surveyed who’d been in a relationship for at least a year admitted to lying to their partners in order to maintain their healthy romantic relationship.

But just because it’s more common to be dishonest from time to time doesn’t mean it’s not taking a toll on your love life. Over 90 percent of people who’d never lied to their partners said they were satisfied by their relationships. Respondents who’d lied, even possibly with the best intentions, were 51 percent more likely to admit to being dissatisfied in their current relationships.

Keep It to Yourself 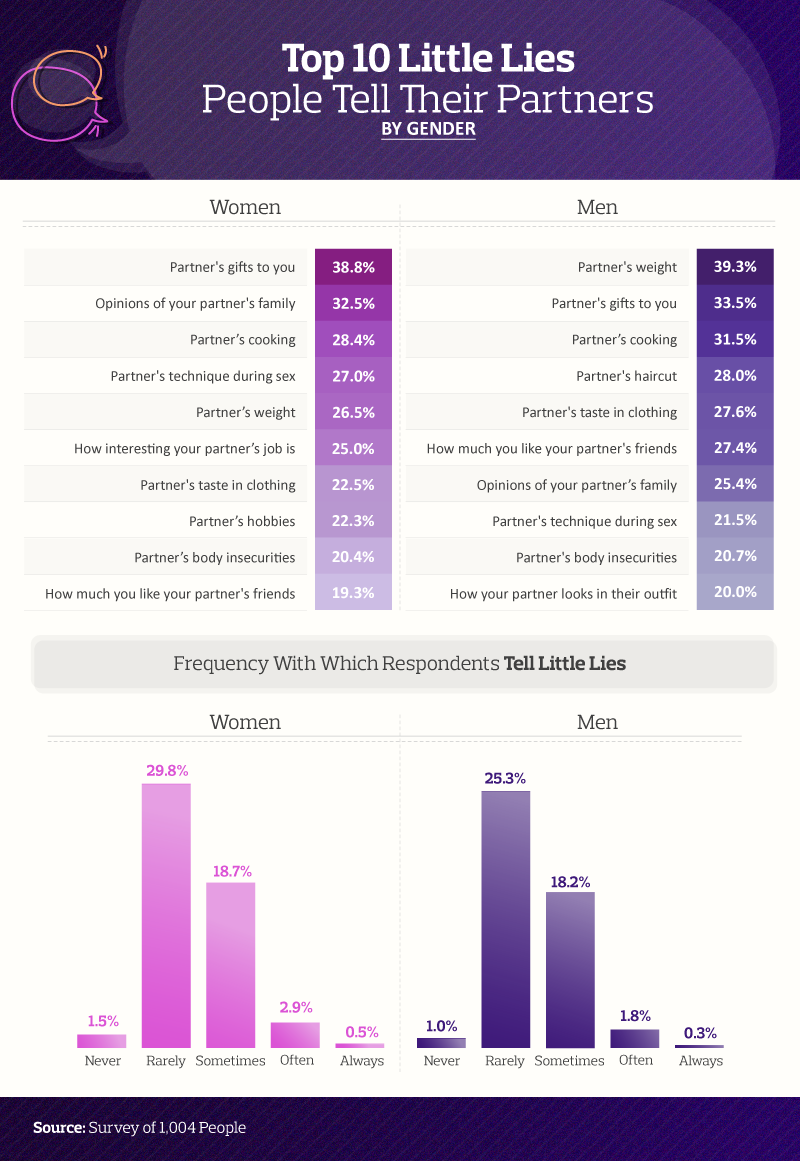 The good news is that not all lies are created equal, and they might not all have the same impact on your relationship. In some cases, experts suggest there are some lies you should tell the people you love if you want to keep things as peaceful as possible. If telling the truth means deepening their insecurities or making relations tense between them and other people (like family), it’s better to avoid those uncomfortable conversations.

Even though a majority of people said they only told little lies either rarely or sometimes, some of these fabricated stories were more common than others. Nearly 2 in 5 women admitted to obscuring the truth about how they felt about a partner’s gift, and over 32 percent didn’t always tell the truth about their partner’s family.

For men, the most routine inaccuracies were focused on areas where their partner might have the most self-doubt. Compared to women, men were more likely to lie about their partner’s weight, cooking, haircut, and taste in clothes. Lies are usually a form of self-preservation, and being conscious of your partner’s vulnerabilities may actually be good for the relationship. 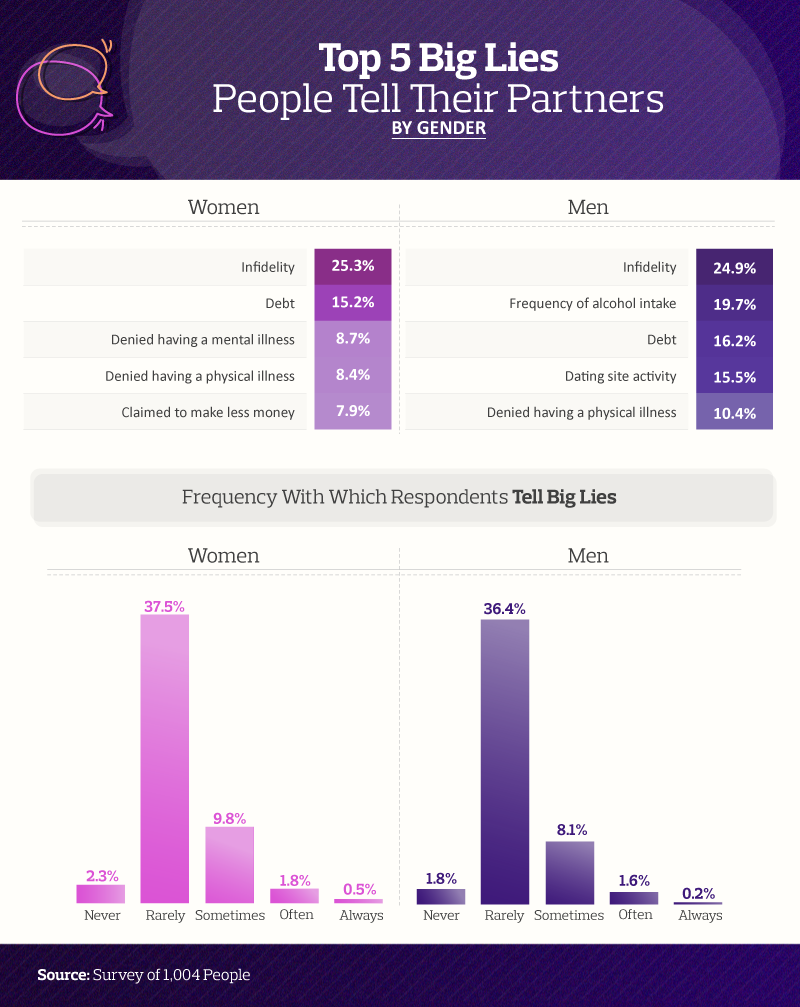 No matter who you are or how much you think you love someone, there are a handful of toxic relationship habits that can and will destroy almost any romance. Because open (and honest) communication is so important, lying about any of these major issues could spell doom for your love life.

Nearly 1 in 5 men admitted to lying about how much alcohol they consumed regularly. For some people, substance use can be a way to cope with stress or depression but can quickly turn abusive and dangerous for both people in the relationship. Men were also more inclined to lie about their dating site activity (nearly 16 percent) and how much money they earned (10 percent).

Almost 8 percent of women claimed they earned less money than they actually did. Research shows women – particularly millennial women – are ashamed of earning more than their male partners and may become resentful of their significant other over time. 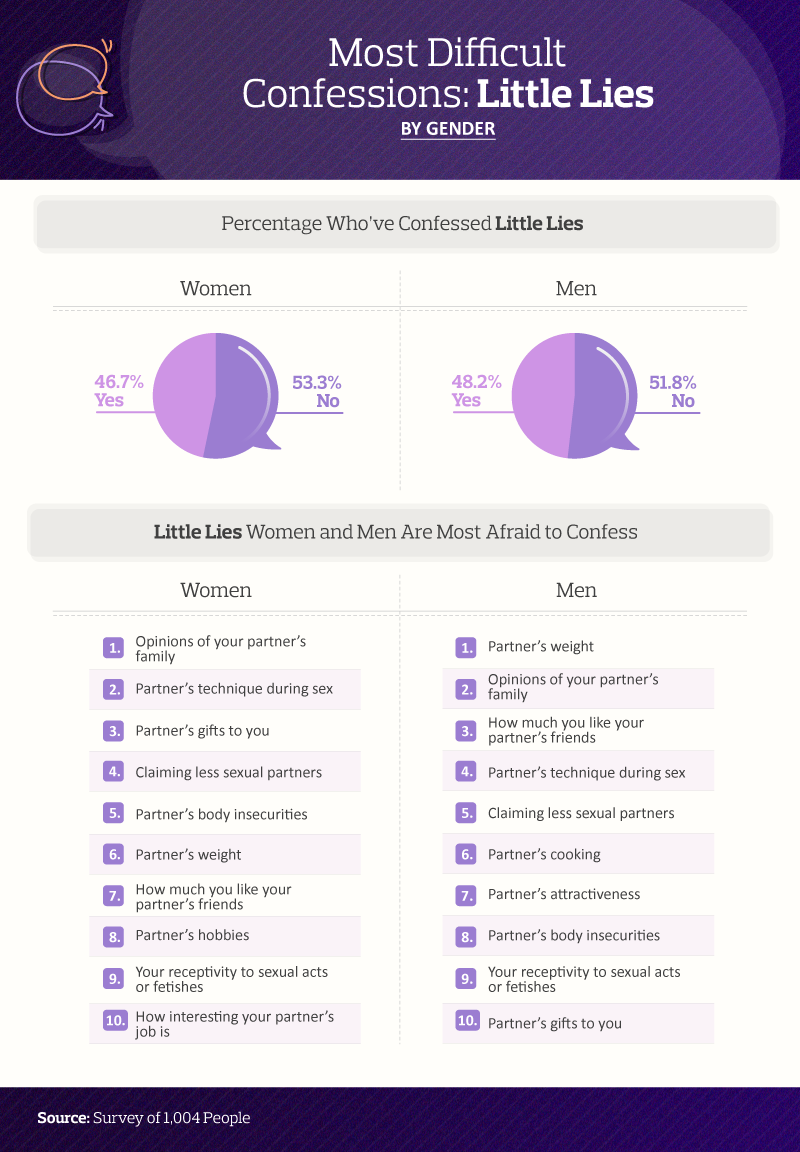 Acknowledging the lies we tell regardless of their severity is one thing, but admitting them to our significant other is something else entirely. As we found, men and women had similar views on telling the truth behind their white lies. Over 50 percent of both men and women admit that they have never confessed to white lies in their relationship.

Learning to love your partner’s family isn’t a guaranteed aspect of even the best relationships, so understandably, it might make it difficult for someone to admit to their partner that they’ve been lying about their opinions on their family. In our study, women said they were most afraid to tell their partners how they truly felt about their family. Men, on the other hand, were most afraid to admit to lying about their partner’s weight. Lies about a partner’s sexual technique is the second-most difficult thing to tell the truth about, according to women.

The key to having good sex (especially if you’ve been together for a longer period) is intimacy and communication. Even if it feels uncomfortable at first, breaching the conversation over what you do and don’t like can help keep the fire burning year after year. 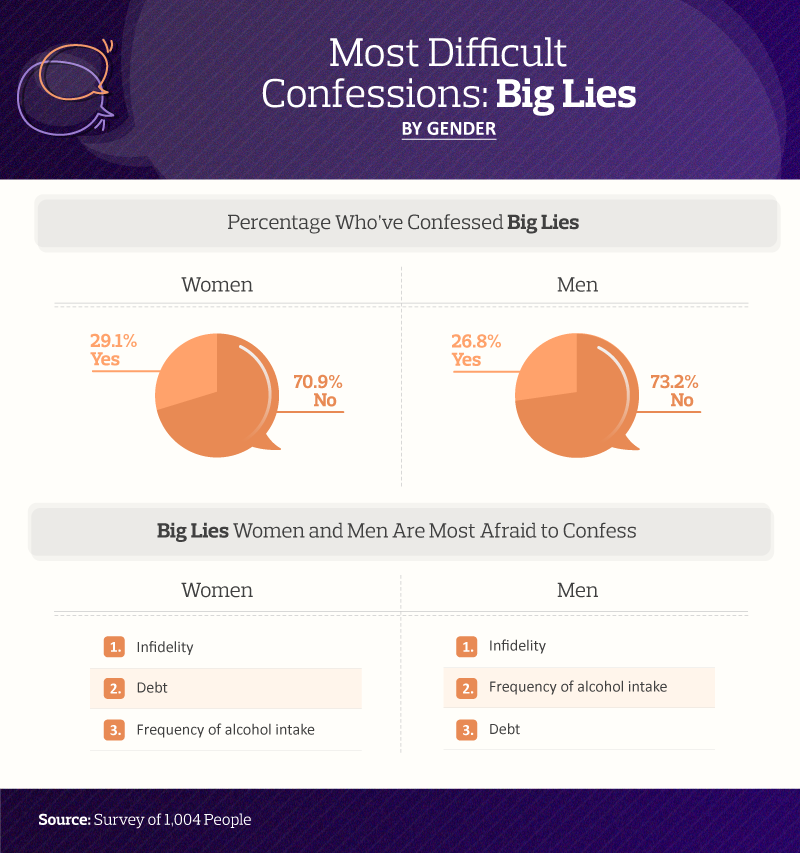 The reason little lies might be so common in relationships isn’t necessarily because honesty isn’t always the best policy but because being truthful all of the time can be an extremely difficult habit to adopt. In fact, being honest can feel extremely uncomfortable, especially when it comes to potentially hurting the people we love.

Perhaps that’s why only 29 percent of women and 27 percent of men admitted to confessing big lies in their relationships. It was infidelity, more than any other transgression, that they were afraid to acknowledge openly. Studies show that in roughly a third of marriages across the U.K., at least one or both partners anonymously admit to being unfaithful. For women, debt was the second biggest lie they were afraid to own up to, while men avoided talking about the reality of their alcohol intake.

On the Other Side 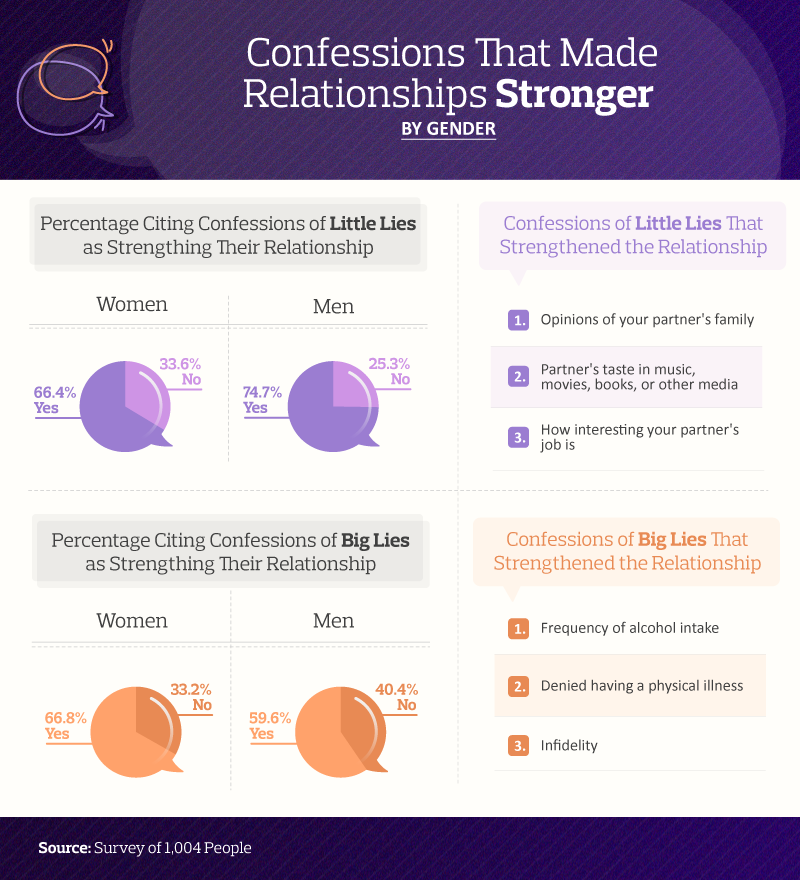 Little lies might start as an easy way to avoid uncomfortable conversations or to keep from hurting your significant other’s feelings, but more than 66 percent of women and 74 percent of men suggested giving up on the lies and coming clean with the truth had a positive impact on their relationship. Whether it’s having previously fibbed about how much you enjoyed your partner’s family during Christmas or lying about their great taste in music, confessing these lies had positive impacts on respondents’ relationships.

Being honest about infidelity might be one of the hardest conversations you’ll ever have as a couple, but it could be worth the trauma and consequences. Deciding to stay with someone after they’ve cheated on you isn’t impossible, and while it requires consistent communication and time to overcome, it might help strengthen your love for each other. Nearly 67 percent of women and 60 percent of men who’d lied to their significant other over something major also said being honest about the issue ultimately made their relationship stronger. 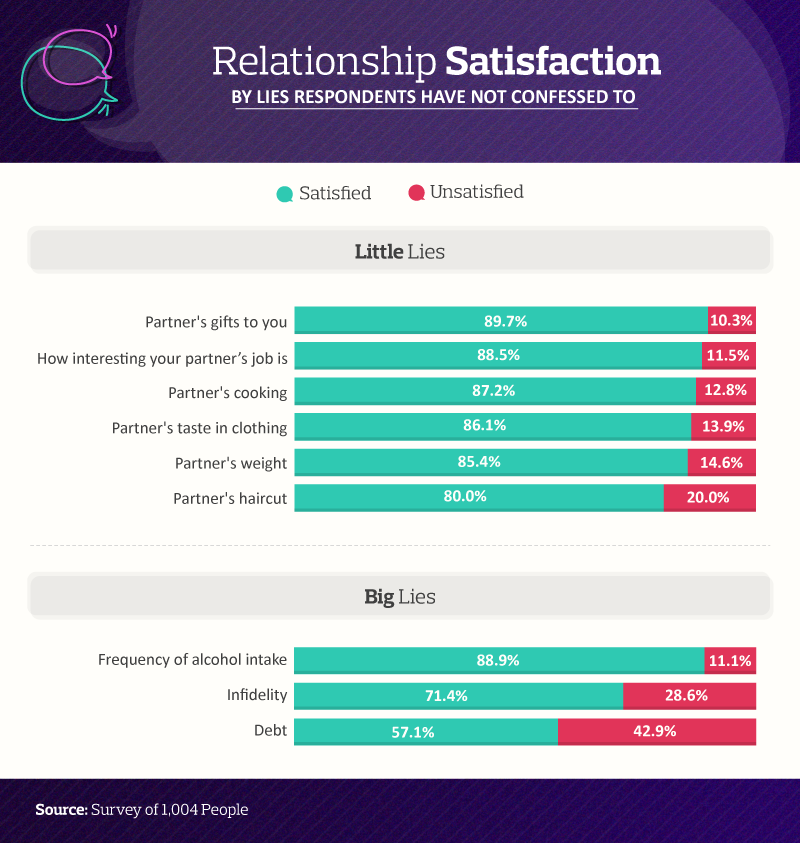 Not all lies are harmful to a relationship; in fact, there were a few lies that our respondents reported along with high relationship satisfaction. If you’re thinking about being honest with your significant other about the gifts they buy you (perhaps you don’t like them as much as you let on), you might want to think again. Almost 90 percent of respondents who lied about the way they felt about their partner’s gifts said they were satisfied in their relationship.

A more substantial lie that was related to higher relationship satisfaction was “frequency of alcohol intake.” Whether they drink more than they let on or less, almost 89 percent of participants admitted to lying to their partner about how much they actually drink. Though hiding a potentially serious substance issue in a relationship is dangerous and not recommended, only 11 percent of these respondents felt dissatisfied by keeping their drinking habits in the dark. Nearly 29 percent of people holding onto their unfaithfulness said they weren’t happy with their relationship, while over 71 percent said they had high relationship satisfaction. The worst lie to hold onto? Debt; nearly 43 percent of those with this secret reported dissatisfaction in their relationship.

Being honest isn’t always easy. Even if you love someone, you might still find it hard to tell the truth when confronted with a painful conversation. As we found, telling little lies isn’t an uncommon practice in most relationships, and while most of them might seem harmless (including sexual preferences and opinions on style), coming clean was a rewarding experience for most people. Even with big lies (like alcohol consumption or infidelity), many people who decided to be honest reported having a stronger relationship because of it.

At Superdrug Online Doctor, our mission is to make having honest, open conversations about your sex life as easy as possible. Being afraid to talk about sexual health should never come between you and someone you love, which is why our registered doctors can help assess you for sexual health treatments and arrange to send approved treatments discreetly to your door. Save time and embarrassment with a brand you can trust. Visit us at Superdrug Online Doctor to learn more.

For this study, we ran a preliminary survey of 100 people to determine what was considered a little lie or a big lie. Then, we ran a full survey and collected responses from 1,004 people who qualified as being currently in a relationship and in that relationship for at least a year. We also only included respondents who admitted to ever lying to their significant other for the sake of the relationship. The respondents’ ages were between 18 and 72 years old with an average age of 35 and a standard deviation of 10.4 years. We had 53.4 percent of women take the survey and 46.6 percent of men in this survey. To analyse which confessions made participants’ relationships stronger, we asked participants to select lies they confessed to. Then, we followed up by asking them if confessing that lie made their relationship stronger with a “yes” or “no” option. Because this study was done using a survey, certain limitations apply such as telescoping, selective memory, and exaggeration. We did not statistically test these data, and it is an exploratory study of lying while in a relationship.

Think a white lie is completely necessary for certain circumstances? Maybe you want to share our study for noncommercial purposes to continue the conversation. Don’t forget to link back to us to give us due credit. Have questions about our study on lying in relationships? Contact: [email protected].