Long-distance lovers may, however, be better equipped than ever to successfully stay together. Consider all the virtual tools at their disposal: Between social media and FaceTime, partners can constantly keep up with each other. Moreover, some researchers suggest long-distance partners are better communicators. When couples are intentional about making time to talk, these scientists propose, they typically engage in deeper discussions.

In this project, we asked 1,200 individuals in Europe and the U.S. about their experiences in long-distance relationships. Our findings explore the detail of making things work while living apart, from affording travel expenses to getting hot and heavy over the phone. Whether you’re doing long distance currently or are simply wondering if it might be possible with your partner, you won’t want to miss what we found out. 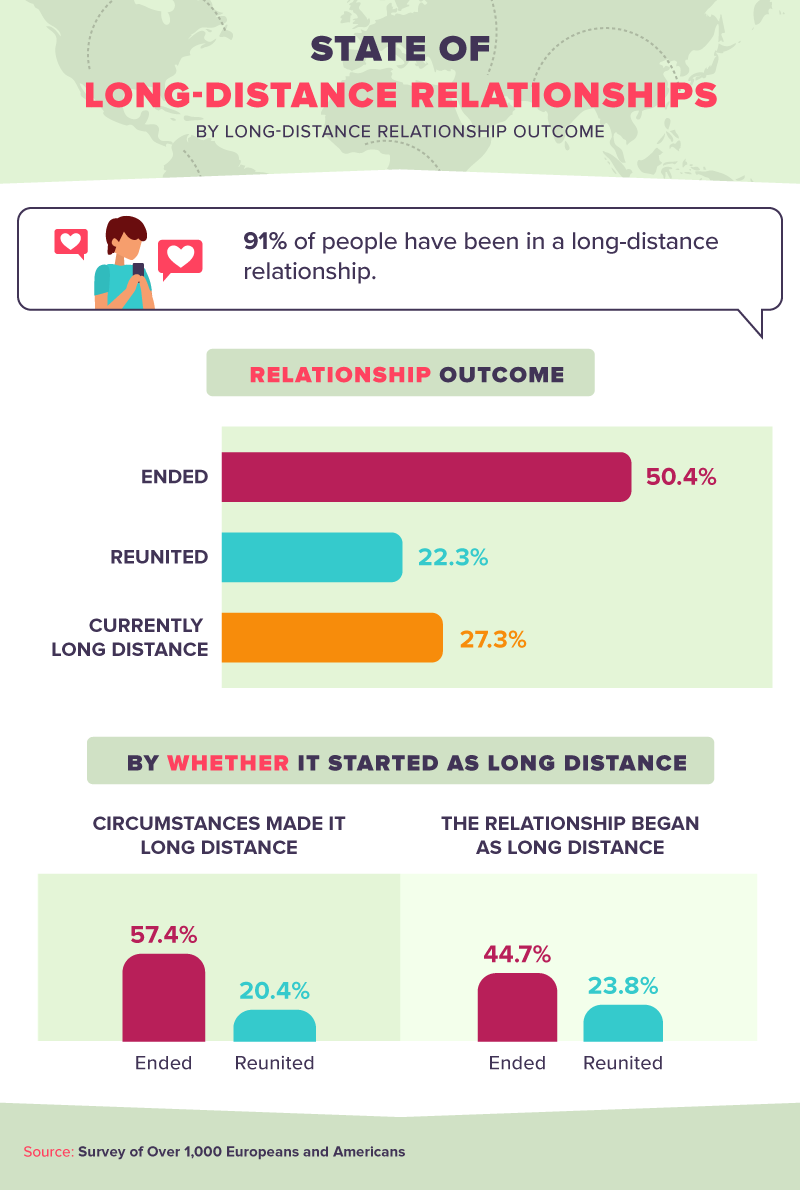 Our findings suggest long-distance relationships are exceedingly common, with 91 percent of participants saying they’d been in at least one before. Unfortunately, only 22 percent reunited and are no longer doing long-distance, whereas 50 percent said the relationship ended. It’s important to note that definitions of romantic success vary greatly, and most people have multiple romantic partners over the course of their lifetime. If one’s sense of success centres on marriage, for example, one might regard the vast majority of relationships as ‘failures’. For these reasons, our team decided to ask people who had been part of a long distance relationships if they had reunited, were still currently doing long distance, or if the relationship had ended.

Interestingly, respondents whose relationship began on long-distance terms seemed to enjoy slightly more success than those who lived close to a partner before being driven apart by circumstances. Perhaps committing to long distance at the outset is actually easier than enjoying someone’s company initially and later adjusting to his or her absence. 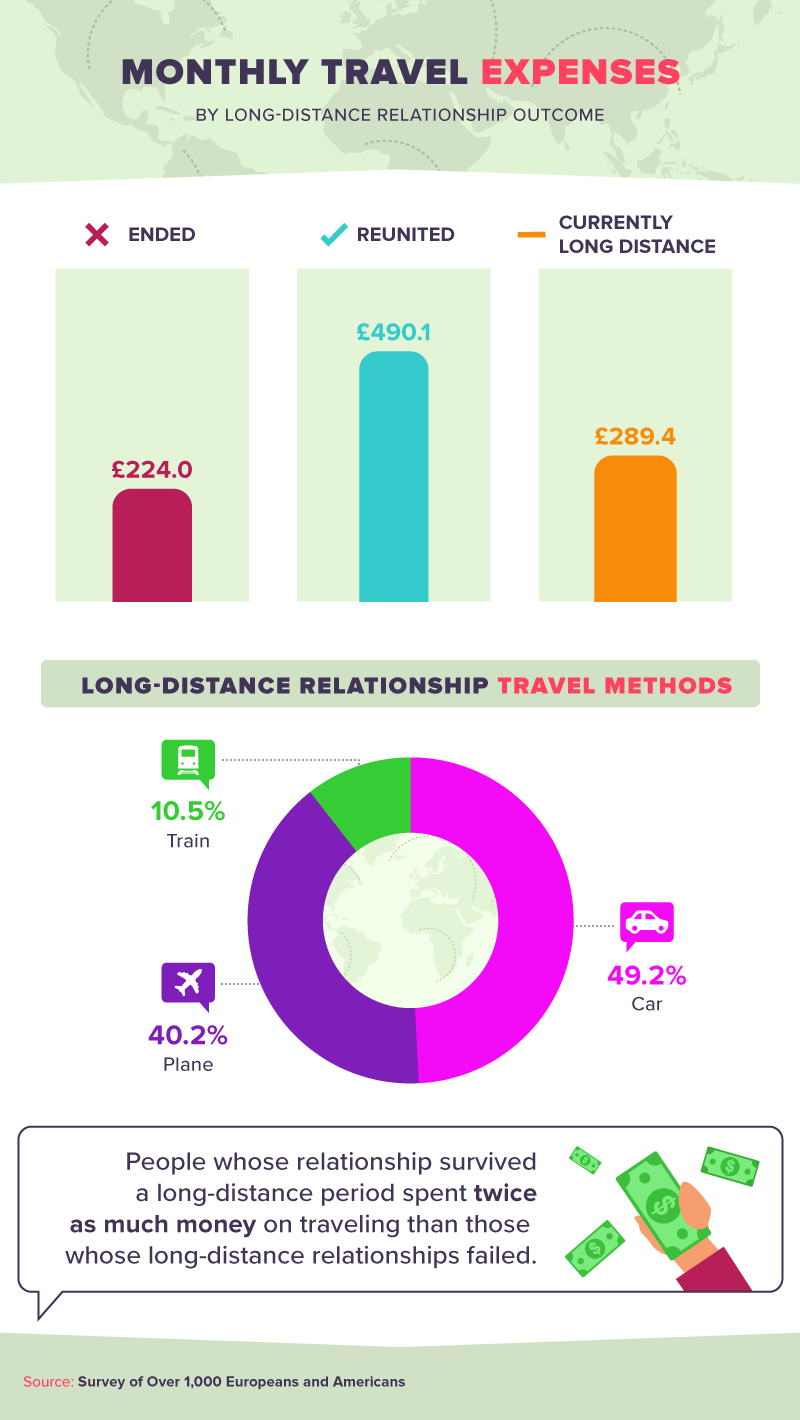 If one hopes to supplement digital communication with in-person visits, the costs of commuting for love can add up quickly. Our study found that people who reunited spent more than twice as much on travelling during their time spent while in their long distance relationship than those whose relationships ended. If you are looking for a tell-tale indicator that the relationship may be progressing (or not), you may not need to look further than how much you are willing to spend on travel.

Frequent visits can be an expensive proposition, but they may pay off in the long run. On average, people who reunited spent over twice as much each month on travel as those who said their relationships ended. Given that 40 percent of respondents travelled by plane to see their significant other, it’s easy to see how expenses could approach $600 a month for couples who visit one another frequently. 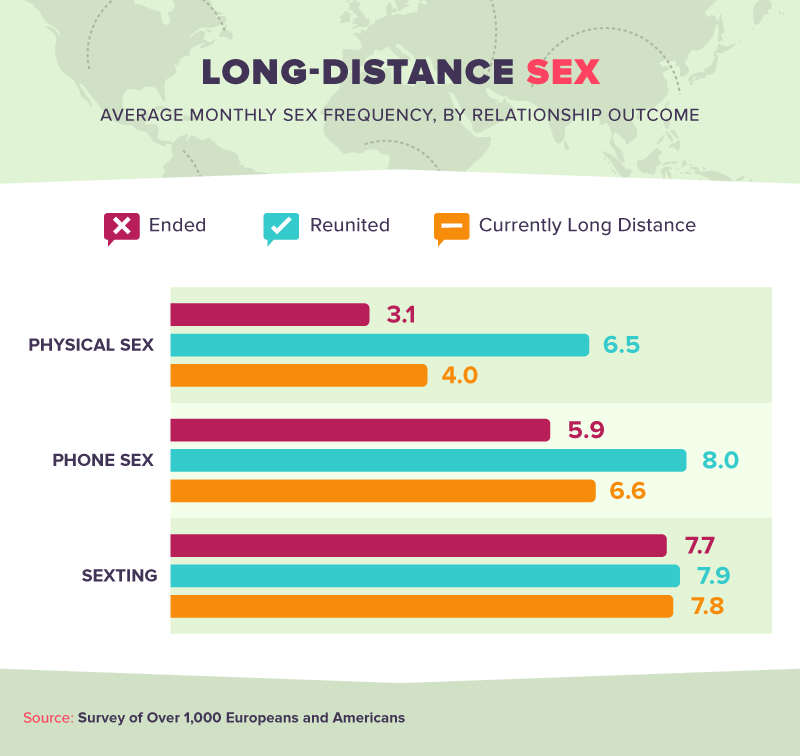 Technology doesn’t just aid long-distance couples’ communication; it can help maintain their sexual connection as well. Our data suggest the people who had reunited in their long-distance relationships had sex with their partners most often on visits but also engaged in phone sex more frequently than those whose relationships ended. Unfortunately, for those who rely mainly on messaging, sexting did not correlate so closely with success in long-distance romance. While those who reunited did on average sext more, it was to a very minor degree that they did.

Roughly 1 in 5 respondents reported using Skype or FaceTime to engage in sex with their partner from afar as well. While these mediums provide a visual element, tech intended for long-distance lovers doesn’t end there. Indeed, physical experiences are now possible: A new generation of internet-enabled sex toys is bridging the gap between partners who live apart.

Of course, nude photos are a common and controversial part of all dating in the digital world: Facebook recently piloted a program to prevent them from being publicly shared by vindictive exes. Interestingly, in long-distance relationships where the parties reunited, men tended to send more nudes than women. While we don’t know if this is indicative of reuniting, it nevertheless was a trend we saw in the couples who did reunite. Conversely, among those currently doing long distance, women were more likely to send nudes than their male counterparts. Parity in exchanging nude photos won’t guarantee success, however. Among those whose remote relationships ended unsuccessfully, men and women sent nudes at roughly equal rates. 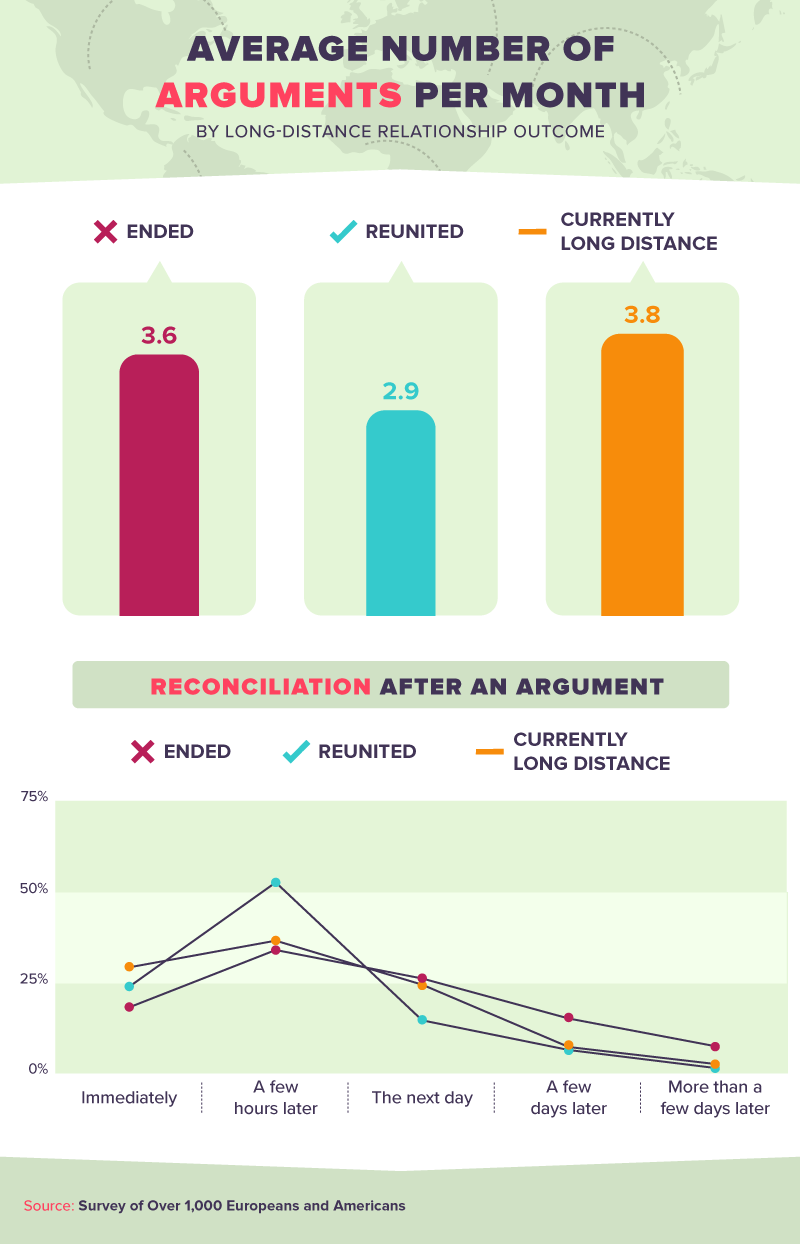 If sexual intimacy can continue at a distance, less amicable elements of being in a relationship persist as well. Interestingly, people currently in long-distance relationships reported more arguments per month than individuals whose relationship ended. This could simply be a function of selective memory: Perhaps fights are easier to recall in your current relationship than when assessing conflict in retrospect. Whatever the case may be, those who deemed their relationships successful fought least frequently, on average.

One might assume that arguments among long-distance couples could drag on for days: With miles between them, either partner can harbour a grudge by ignoring the other’s calls. But our findings suggest most long-distance couples resolved their issues fairly quickly. Indeed, most respondents said they made up immediately or within a few hours, and only about 20 percent said fights typically lasted a few days or longer. Unfortunately, one classic method of reconciliation may not be immediately available to couples doing long distance. More importantly, our study suggested that those who successfully made it through long-distance relationships reconciled arguments sooner than those whose relationships failed or are still currently doing long-distance. 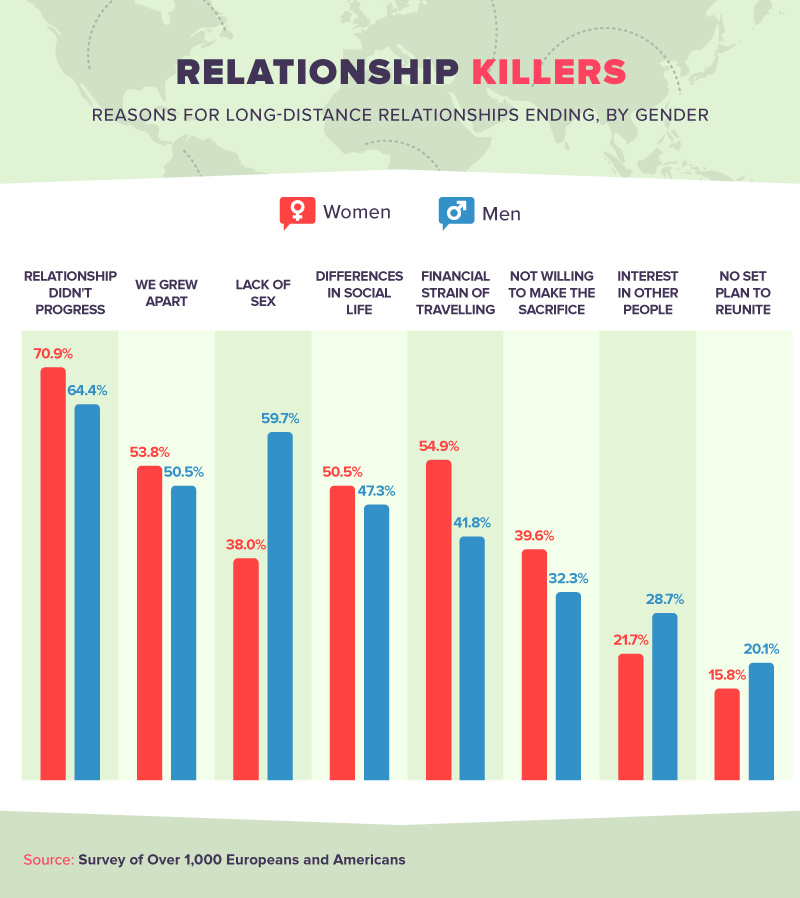 When we asked our respondents whose long-distance relationships ended about the causes of their breakups, some reasons were quite common among men and women alike. The top reason was a lack of progress: Presumably, most people don’t want to do long distance in perpetuity, so there may be additional pressure to move forward or split up. Additionally, many respondents simply noted that they grew apart from their partner or experienced differences in their social lives that couldn’t be reconciled.

Some distinct differences emerged between genders, however: Men were far more likely to say a lack of sex played a role in the dissolution of their long-distance relationship. This finding resonates with recent research indicating that women are more likely to lose interest in sex as the relationship progresses anyway. Perhaps for similar reasons, men tended to cite interest in seeing other people more often as well. Conversely, women were more likely to cite the financial strain of travelling to see one’s partner.

When The Cat's Away 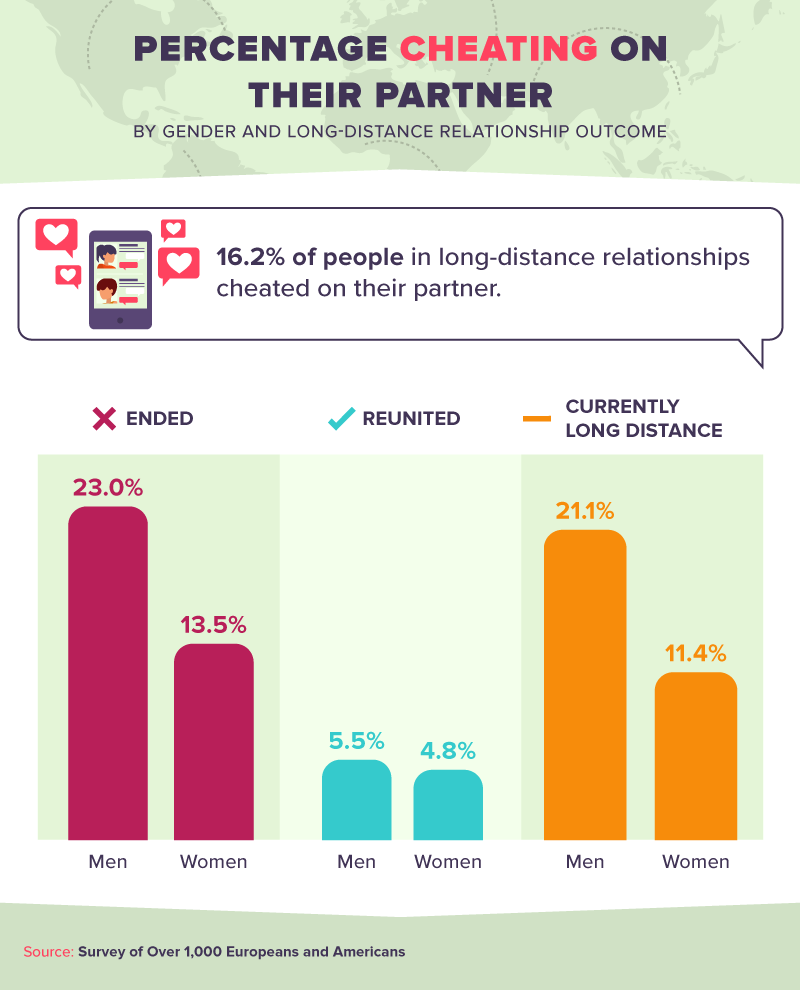 Infidelity is a top concern for many couples, but these fears can be magnified by physical separation. Our findings indicate that the majority of individuals who did long distance didn’t cheat, but infidelity was more common in relationships that ended than in ones that ultimately succeeded. Additionally, men were more likely to cheat than women across the board. In relationships that eventually ended, nearly a quarter of men admitted they’d been unfaithful. By contrast, just 6 percent of unfaithful men said their long-distance relationship succeeded.

Making It Work From Miles Away

Our findings confirm what many in long-distance relationships will readily share: Remote romance requires a thoughtful approach to intimacy and communication. While the associated challenges are significant, our results offer a reason for hope as well. A sizeable portion of people view their own current long-distance relationship as successful, surmounting financial and logistical obstacles. As with any relationship, sharing your life with someone who lives miles away includes a risk of getting hurt. But if the connection grows as time goes on, it can weather quite a lot of fear and frustration.

Just as technology has enabled valuable communication among long-distance partners, so too has it changed the way we can take care of ourselves. With the arrival of virtual consultations, staying well no longer requires exhausting trips to the doctor’s office. With our convenient and discreet platform, you can get your medical needs met on your own schedule. Learn more about Superdrug Online Doctor to see how easy getting expert care can be.

Know someone who’s navigating a long-distance relationship right now? Help the lovebirds out and share this article for noncommercial reuse. Just link back to this page to attribute the authors appropriately. If you have any questions, feel free to contact [email protected].