When we talk about safe sex, we usually mean using protection with a respectful partner. But even if you’re comfortable with consent and contraception, lovemaking still entails some physical risks. Let’s admit it: Passion can quickly turn painful when accidents occur during sex. Even for the most connected couples, one wrong move can replace moans of ecstasy with screams of agony – and leave us sidelined from seduction for the foreseeable future.

We wanted to shed some light on this little-discussed subject and learn what causes these romantic ailments most often. So we surveyed over 1,000 Europeans and Americans, polling them on the injuries they’ve experienced as a result of making love. Our data illuminate the pitfalls of various positions and the frequency with which these awkward injuries occur. Read on to find out which lovemaking positions are most threatening for each partner and the most common ways people get hurt while having sex.

Getting Creative or Hurt? 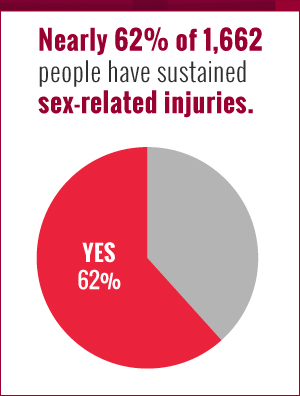 If you’ve ever been injured while getting intimate, our data indicate you’re in the majority. More than 6 in 10 people have sustained an injury during lovemaking – a finding that certainly justifies our concern about the subject. In fact, experts claim sex-related injuries are on the rise, but many patients are too embarrassed to admit the source of their suffering. Perhaps this unfortunate trend would change if more people knew just how often these painful experiences occur.

While some might assume particularly complicated positions would yield the most injuries, our findings suggest that’s not necessarily true. For men, the missionary position was the most common way injuries occurred. Among women, doggy style tied with “no specific position” for the greatest percentage of ailments – although the tried-and-true missionary position accounted for 16 percent of their injuries as well. The cowgirl position also inflicted pain on both genders, accounting for 8 percent of accidents befalling men and 6 percent of injuries affecting women. 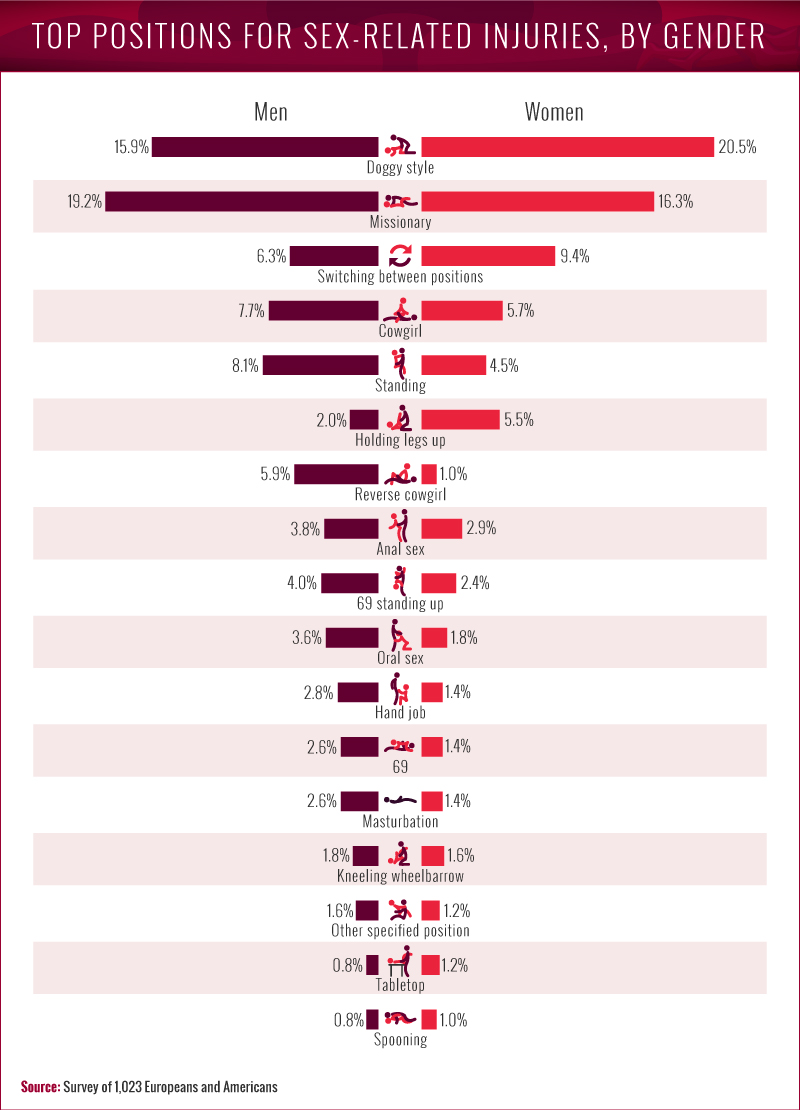 Interestingly, some positions requiring expert balance accounted for relatively few accidents, such as performing 69 standing up or the kneeling wheelbarrow. Either couples who enjoy these positions are especially athletic, or they’re so rarely attempted they don’t contribute to many injuries overall. Some folks, however, got hurt without even engaging in intercourse. Oral sex, for example, contributed to 4 percent of male injuries and 2 percent of ailments among women. 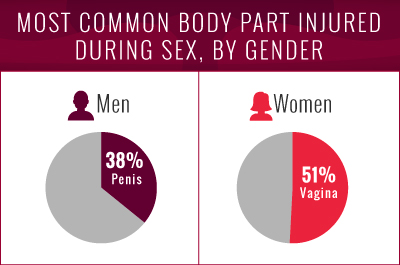 Of all the body parts that might be injured during intercourse, our most vulnerable are also our most private. Among men, 38 percent of sex-related injuries affected their penis. For women, the rate of genital injury was even higher, with more than half of their injuries entailing harm to their vagina. Thankfully, many such issues heal relatively quickly. Experts say vaginal tears and soreness often heal within one or two days – so long as you don’t aggravate this sensitive area again in the interim.

Although genital injuries were the most common source of pain overall, some positions produced other kinds of pain quite regularly. For instance, 31 percent of men injured during doggy style reported back-related ailments, as did guys hurt in the missionary position. Men were most likely to hurt their backs during standing sex, however; this injury was actually more common in that position than penis afflictions. Women also reported back injuries with some frequency but cited leg discomfort more often. In the cowgirl position, for instance, 29 percent of injured women said their legs were hurt – surpassing even vaginal injuries. 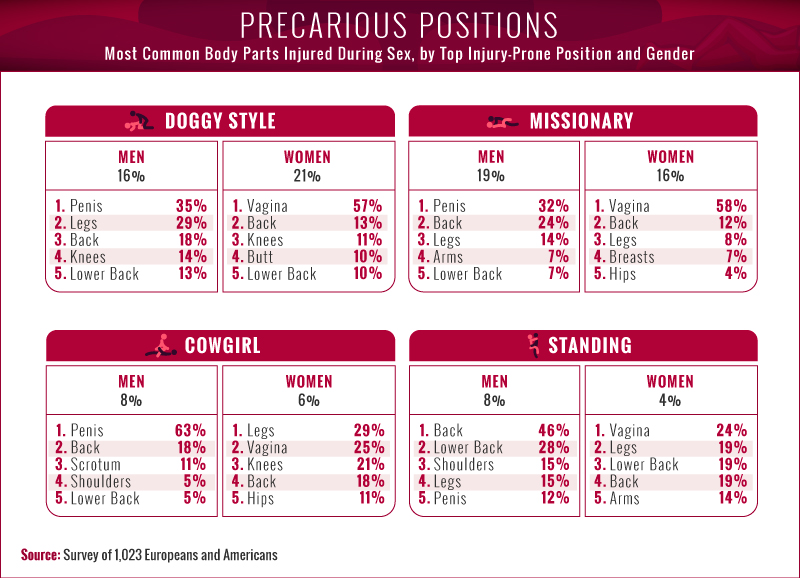 Digging deeper into the symptoms of sex-related accidents, a handful of positions generated multiple kinds of pain. Of those feeling back pain, for example, 20 percent had been in the missionary position, and another 20 percent had been performing doggy style. But these positions held the top two spots for many other kinds of pain as well, including sprains, cramped muscles, and vaginal tearing. These two techniques differed in their likeliness to cause bruising, however. Doggy style accounted for 19 percent of bruising reports, whereas missionary produced just 8 percent of them. 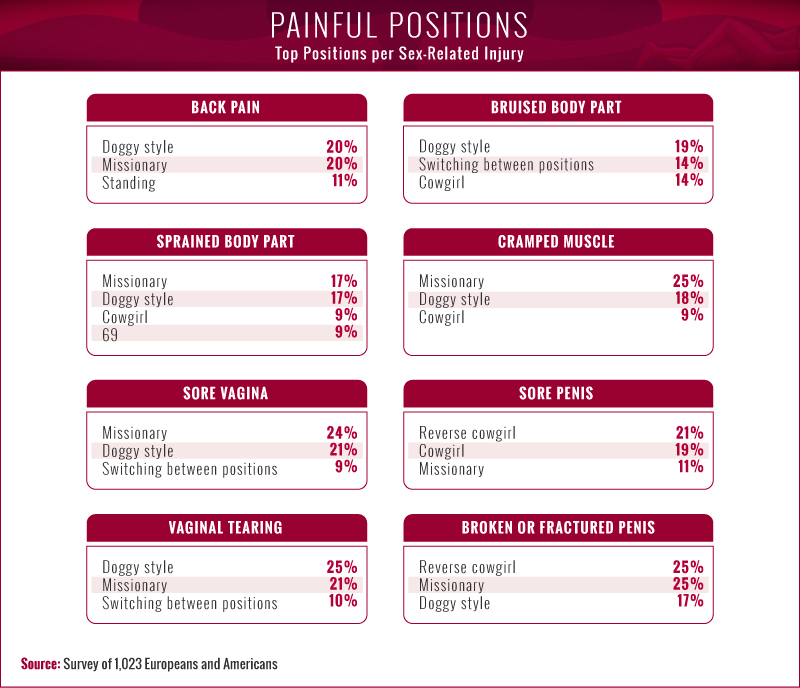 One position was most threatening for penises: Reverse cowgirl. The position caused more than 1 in 5 sore penis experiences, and a quarter of broken or fractured penises as well. Previous research has suggested the dangers of the cowgirl position for male genitalia, and our data confirm the risks of this method as well. But penile fractures don’t just occur when the female partner is on top: 25 percent of them happened during missionary sex, and 17 percent occurred during doggy style.

How Each Sex Suffers

Among women injured during sex, vaginal soreness was the most common ailment, accounting for 57 percent of our female respondents’ painful experiences. For men, however, the leading issue was back pain. This result is interesting in light of some expert opinion suggesting sex can actually help with this issue: One recent study suggested orgasms can be employed as a therapeutic tool to mitigate this chronic pain. For both genders, muscle cramps were a significant challenge, accounting for more than a third of injuries for men and women alike. 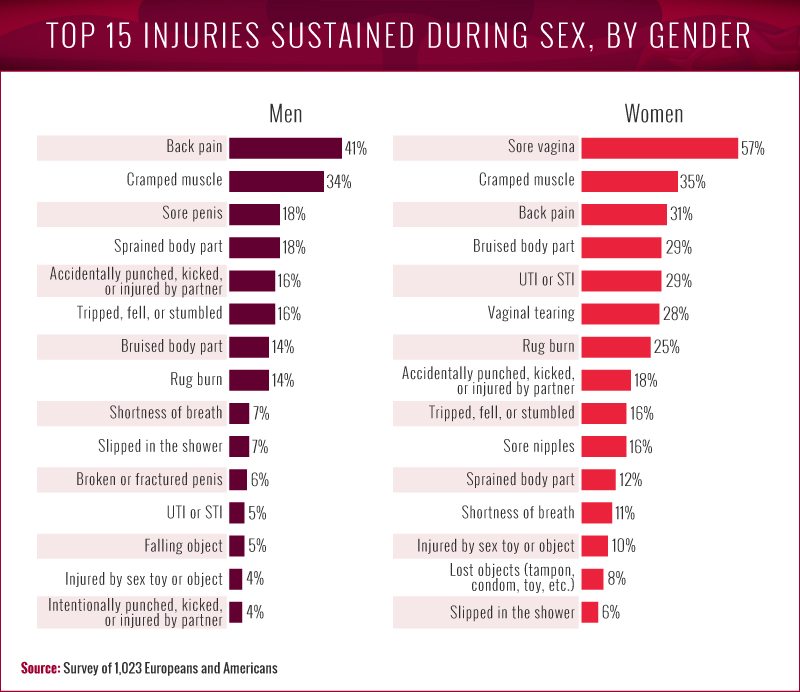 Although soreness of the genitalia was apparently a greater risk for women, 18 percent of male injuries entailed penis injuries. Sprains accounted for the same percentage of injuries among men, followed closely by accidental punching or kicking by a partner and tripping or stumbling. These accidents were less common among women, although female respondents had other concerns: urinary tract and sexually transmitted infections. These accounted for 29 percent of injuries experienced by women but just 5 percent of injuries for men.

How Getting Frisky Gets Risky

Regarding causes of these sex-related injuries, rough sex surpassed any other reason for both men and women. Perhaps this is why sex experts suggest approaching rough sex incrementally, going slowly to make sure both partners are comfortable with each escalation. The second leading cause was overexertion, although this issue contributed to 19 percent of male injuries, compared to just 10 percent for women. About the same percentage of men and women blamed the particular position for their injuries, suggesting both genders need to be mindful of the sex methods they attempt. 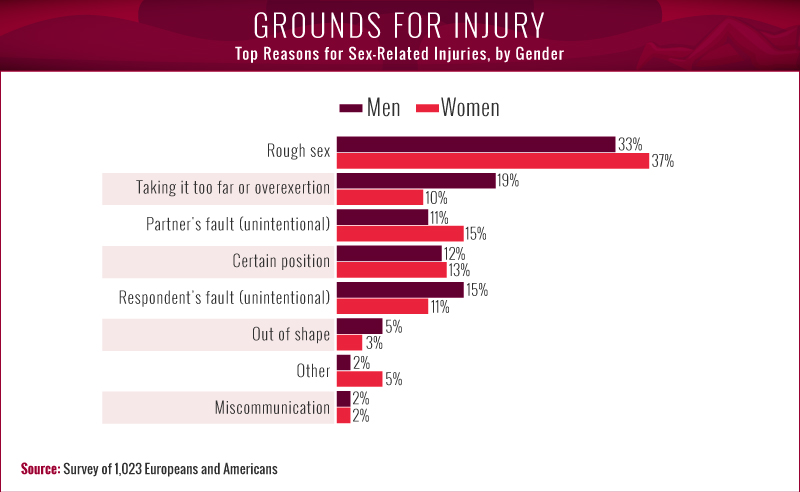 Interestingly, 15 percent of women said their partner’s accidental action was responsible for their pain, whereas just 11 percent of men said the same. These percentages were exactly the opposite when it came to injuries people caused themselves.

For men and women hurt during sex, the percentage who sought a doctor’s help was identical: 53 percent. For some, their injuries needed urgent medical attention, with over 13 percent of all people saying they went to the ER for treatment. Others opted for a walk-in clinic, and roughly 1 in 10 people sought the help of a friend. Interestingly, only a small portion of people turned to their sexual partner to help with healing. Perhaps it’s difficult to confront our partners with the pain they’ve unwittingly caused – or maybe we don’t feel especially fond of them during these painful moments. 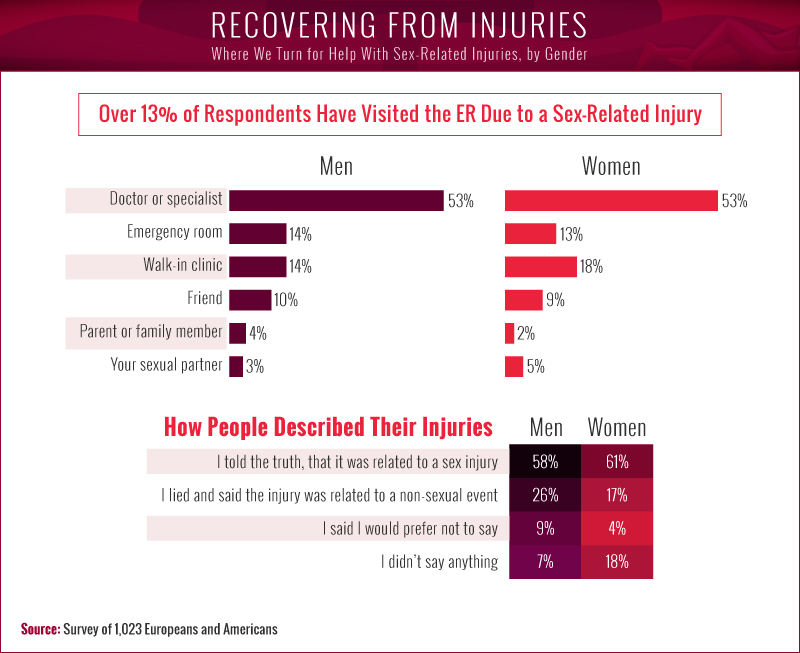 Thankfully, a majority of men and women felt comfortable being truthful with medical professionals about how their injuries occurred. Still, more than a quarter of men lied about the cause of their injuries, citing nonsexual reasons for their pain. Women, conversely, were more inclined to say nothing at all about how their injuries occurred, with about 18 percent choosing this route. Choosing not to disclose how sex injuries occur is obviously a personal choice, but no patient need be reticent about this reality. After all, our data demonstrate just how common such issues truly are.

While our findings suggest sex can lead to injuries fairly often, you don’t need to feel you’re rolling the dice with each intimate encounter. Nor should you steer clear of positions you and your partner enjoy just because others have hurt themselves attempting them. As with most sexual matters, the key to safety and shared enjoyment is communication. Expressing your preferences and concerns with your partner can help prevent injury – and likely improve your pleasure as well.

But talking about sexual intimacy can be difficult, especially when we have concerns about our bodies. That’s why Superdrug Online Doctor offers quick, private, and entirely virtual consultations, so embarrassment is never an obstacle to better health. If you’re seeking medical advice related to your sex life, our discreet and convenient services are here to help you.

If you want to spread the word about having safe sex, we welcome you to use our findings and images for noncommercial purposes. Just credit us for our work by providing a link to this page: Skipping attribution puts us in a tough position, and our feelings will get hurt.