Apart from fidelity, sex is often a main factor for measuring the “success” of a relationship. If the sex life is considered healthy, then often the relationship is as well. But sex in the U.S. has been on the decline in recent years, and similar trends have been seen in the UK, so we thought this measurement deserved a second look. Do people believe sex determines the quality of a relationship today? How does sexual frequency evolve from the honeymoon period to a long-term relationship? And how do couples navigate the waters of mismatched libidos that occur over time?

We surveyed 514 Americans and 530 Britons, all of whom were in relationships. They answered some deeply intimate questions for us, which ultimately showed us the impact of different types of sex lives on the modern relationship. They also shared some of the strategies they tried when things felt out of whack, as well as how their approaches to sex impacted both the quality of the relationship and even their mental health. Whether you’re in a relationship or simply wondering what “normal” means today, you’ll want to keep reading. 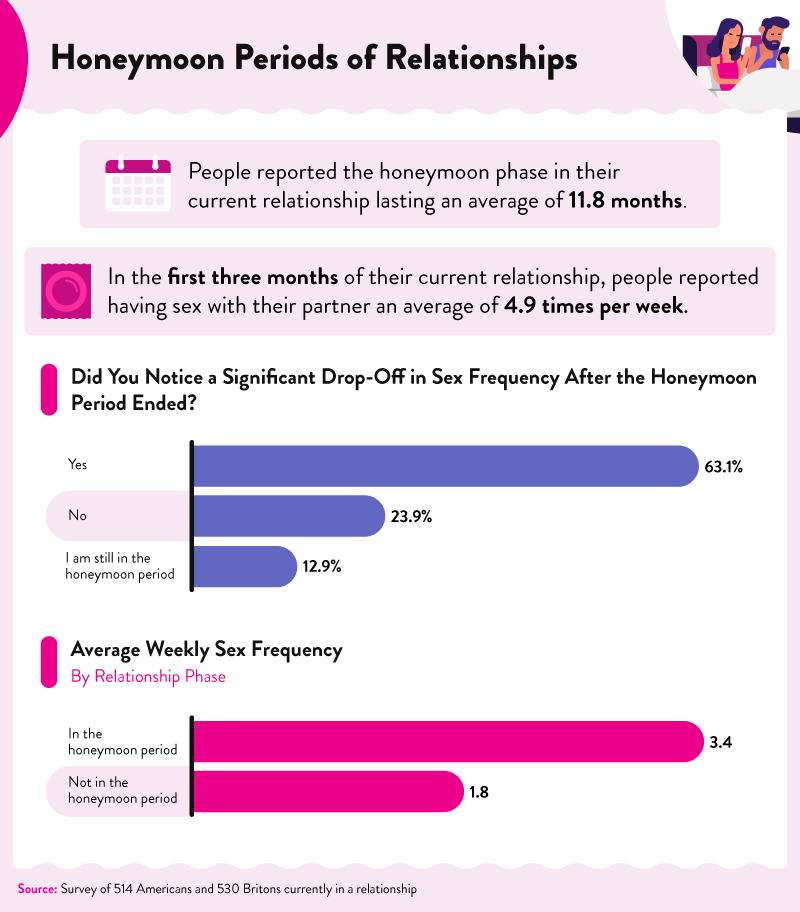 We defined the honeymoon period for respondents as “the early stage of the relationship when it feels fresh and exciting.” Scientists explain this excitement and freshness to be the result of a “surge of feel-good bonding chemicals” that often correlate with a lot of sex. For our respondents, these feel-good chemicals, or the honeymoon period, lasted an average of 11.8 months.

Once the honeymoon period was over, the vast majority (63.1%) noticed a decline in sexual frequency. Scientists have also explained this experience is common, claiming that once the levels of feel-good chemicals wear off, the sex hyperdrive that correlated with it will wane as well. While respondents engaged in sex with their partners an average of 4.9 times per week in the first three months of their current relationship, that average dropped to just 1.8 times once the honeymoon period ended. 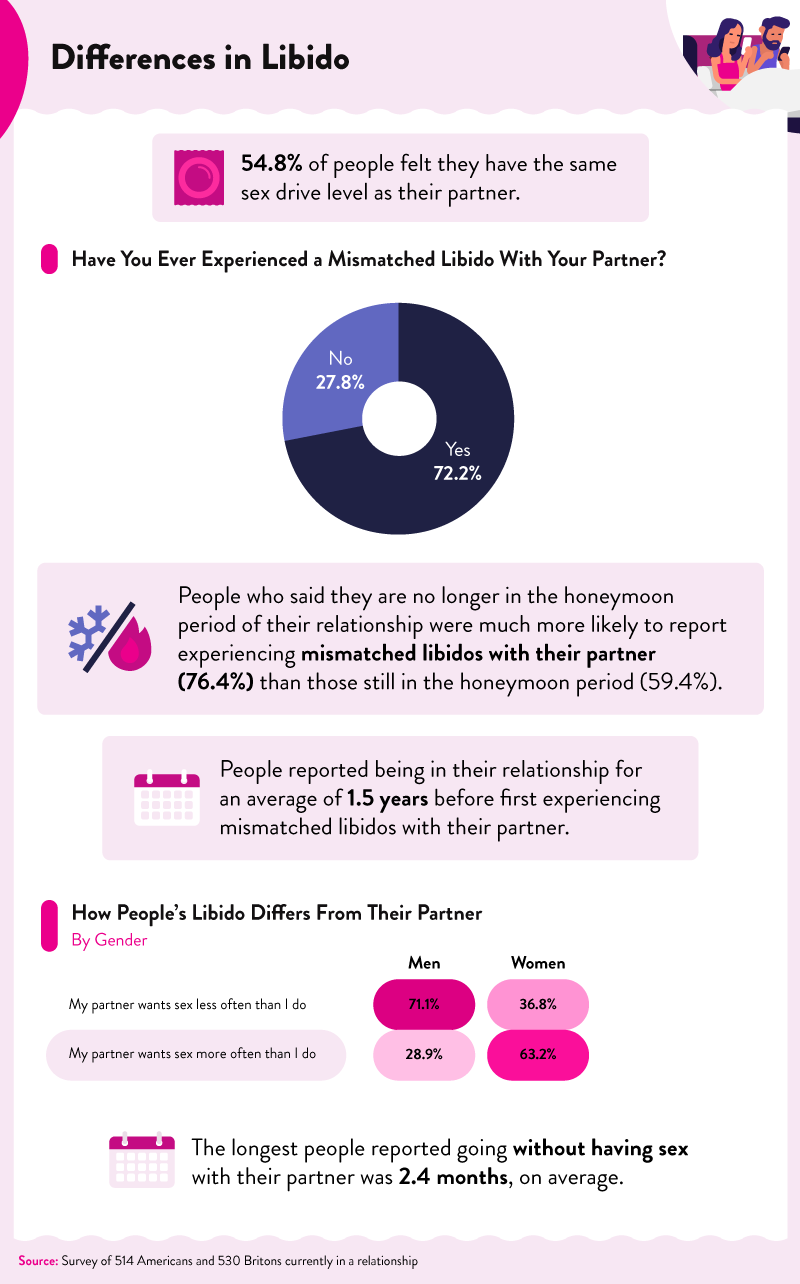 Without the additional dopamine that spikes in a honeymoon period, couples typically settle into a rhythm with their sex lives. Within this reality, there are often differences in libido. The next portion of this study asked respondents to compare and contrast their own libido with that of their partner.

Slightly more than half of all couples claim they have a libido similar to their partner. Bear in mind that this is including the 12.9% of respondents who are still currently in the honeymoon period. Also note that nearly three-quarters of respondents had experienced mismatched libidos at some point. That said, people who were no longer in the honeymoon period were much more likely to have had this mismatched experience.

According to couples therapist Ian Kerner, “the number one issue I deal with in my practice is discrepant libido.” This discrepancy became evident once we compared the responses of men and women who reported having a differing libido with their partner. Just over 63% of women said their partner wanted sex more often than they did. Nearly 29% of men said the same.

Additionally, we asked people about the longest they had gone without having sex with their partner: The average was 2.4 months. Nevertheless, sexual desire is not typically something that remains steady amongst long-term relationships. There are natural ebbs and flows to sexual desire that aren’t necessarily a sign that the relationship is doomed. Moreover, sexual desire can often be related to external stress factors separate from the relationship.

How to Handle the Discrepancy 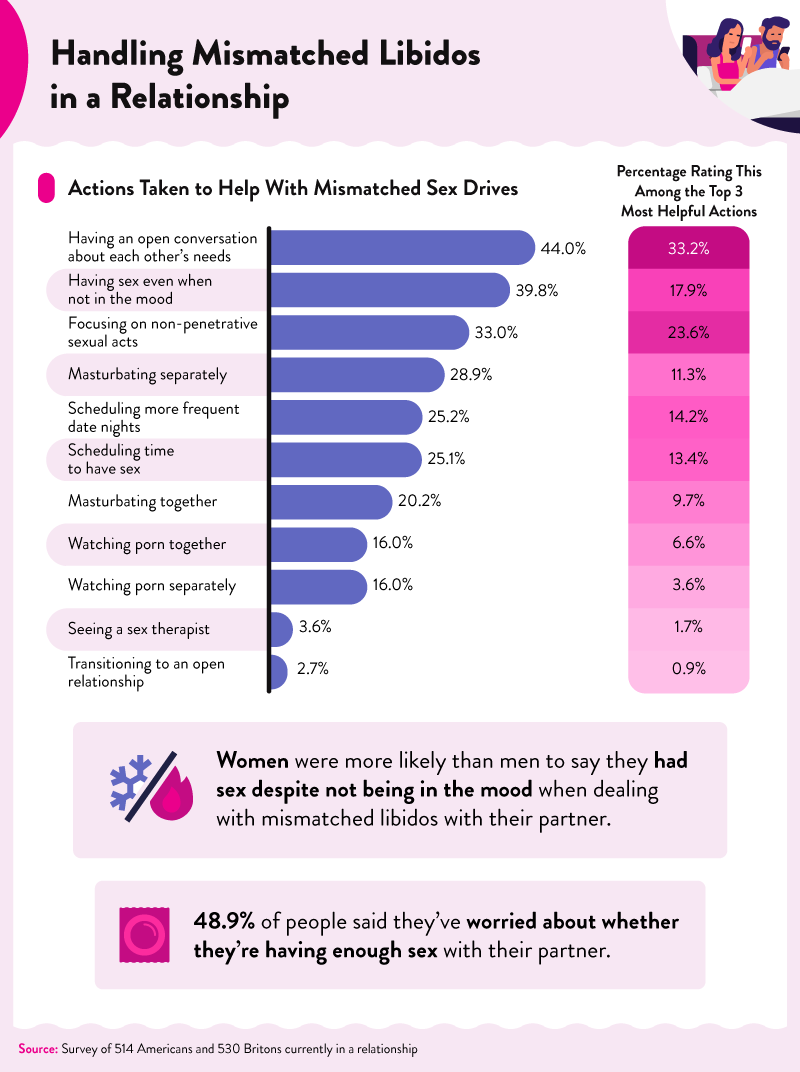 As time goes on, couples who last past the honeymoon period will likely face times where their own sex drive does not match that of their partner. Fortunately, there are many options to address this issue. The next part of our study looked at the most common approaches couples took to mismatched libidos and how helpful they found those actions to be.

Having an honest conversation about the discrepancy was not only the most common approach (44%) but also the most helpful. The next most helpful option was to try focusing on nonpenetrative sex. Nearly a quarter of respondents who tried this found it helpful. According to sex educator Cameron Glover, it’s “super important that more people talk about sex as an all-encompassing experience and not just hyperfocus on penis-in-an-orifice.” Having nonpenetrative sex, therefore, can be a way to bring enjoyment back to the overall experience of intimacy together.

A quarter of respondents also tried scheduling more frequent date nights – another way to bring the focus back to the entire experience of intimacy as opposed to solely physical expressions. 14% of respondents chose this as one of their top three most effective methods for handling libido discrepancies. Very few people had chosen sex therapists (3.6%) as an option, likely due to comfortability, but if Ian Kerner is any indication, these professionals see couples with the same exact problems every day, and enlisting their help could prove effective.

Consequences of the Mismatch 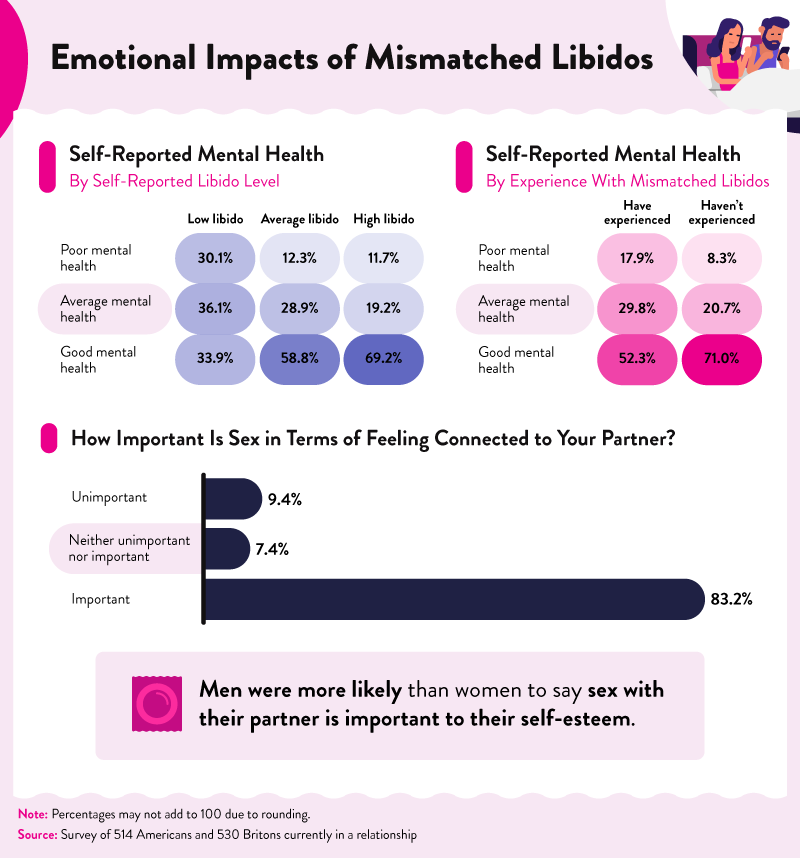 For most couples, sexual desire will fluctuate as the relationship gets older. That said, if your libido has been extremely low for an extended period of time, it’s worth looking into. While low libido can be a sign of a mental health problem, like depression, it can also be a natural reaction to stress or a side effect of certain medications. Respondents who rated their own mental health as “poor” were much more likely to also say they struggled with low libido, compared with people who rated their libido as average or high. Those who rated their mental health as good, on the other hand, often enjoyed high libidos, by their own standards. Mismatched libidos had a similar impact to low libido: Those who had experienced mismatched libidos with their partner were more than twice as likely to experience poor mental health than those who hadn’t.

Several clear reasons surfaced as to why low libidos and mismatched libidos were so inextricably linked with mental health. The vast majority (83.2%) said sex was important in order to feel a connection within their relationship. And men were more likely to say that having sex with their partners was important to self-esteem. Both connection and self-esteem can be linked to mental health, which can, in turn, impact people’s sex lives. 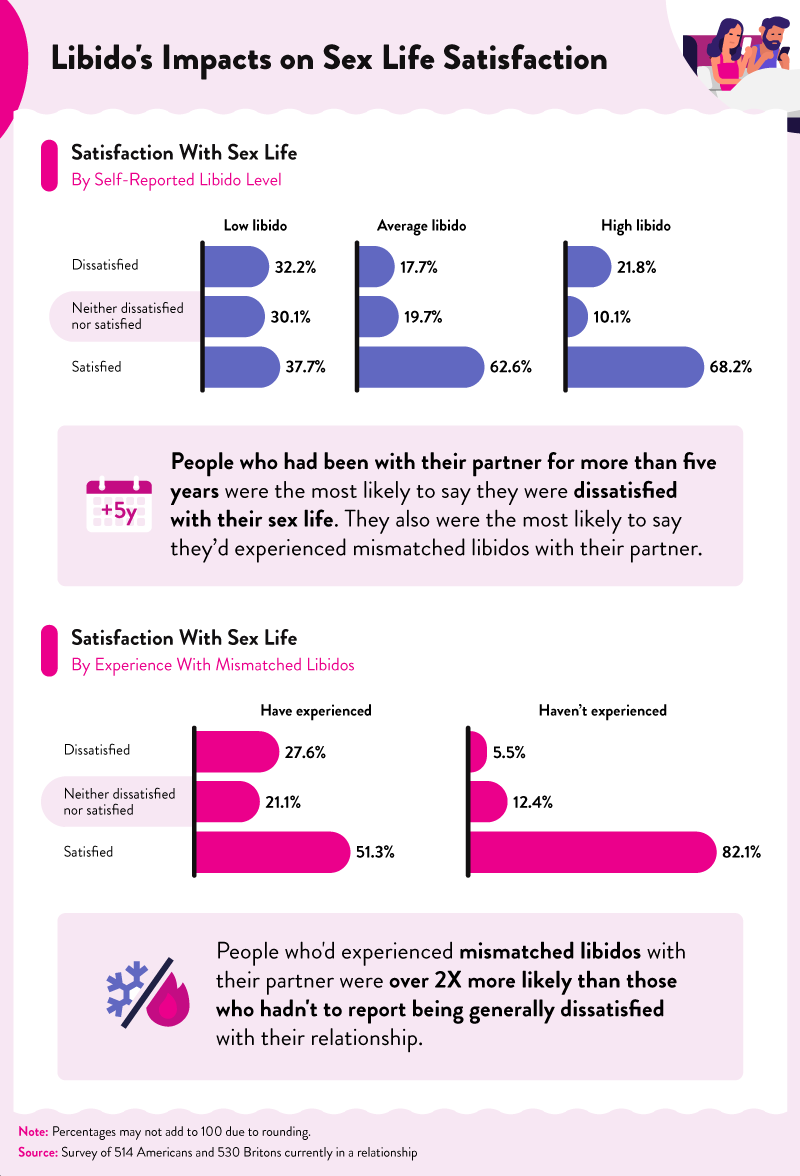 The final portion of our study looked to explore whether or not having a high or low libido would ultimately determine a person’s sexual satisfaction. In other words, can a low libido be fine so long as it’s matched and vice versa?

We were surprised to find that a low libido was even more detrimental to sexual satisfaction than a mismatched libido. Nearly a third of people who rated their own libido as low were dissatisfied with their sex life.

But mismatched libidos weren’t exactly a walk in the park, even if they may have been temporary. People who experienced mismatched libidos were over two times more likely to report being dissatisfied with their relationship as a whole. Recall, however, that matching libidos were much more common in the honeymoon period, where the feel-good chemicals were running wild. Respondents who had been with their partner for more than five years were the most likely to have experienced mismatching libidos and be dissatisfied with their sex life.

Once the honeymoon period is over, the ebbs and flows of sexual desire will likely come. And getting those ebbs and flows to perfectly match those of your partner is often an unrealistic expectation. Instead, respondents proved that it was most effective to have honest and open communication. You and your partner should be able to talk to each other about what you each want from your sex lives and your relationship. Be willing to acknowledge the discrepancies as well as agree on the approach you want to take to improve them.

There is also no shortage of ways and experts to help issues like these. At Superdrug Online Doctor, your overall health and sexual health are our top priorities, and we’ve compiled all of the resources you may need for both in one place.

We surveyed 514 Americans and 530 Britons who reported being in a relationship about their experiences with differing libidos with their partner.

All averages were calculated to exclude outliers. This was done by finding the initial average and standard deviation and multiplying the latter by three. This product was then added to the initial average. Any data point above that sum was then excluded.

When reporting what actions were most helpful in dealing with mismatched libidos in their relationship, respondents were instructed to pick the top three actions they had tried that they found most helpful.

Respondents were asked to rate their mental health. They were given the following scale of options:

When asked to rate the importance of sex to feeling connected to their partner, respondents were given the following options:

In our final visualisation of the data, we grouped these into three main categories: unimportant, neither unimportant nor important, and important.

Respondents were asked to report both their satisfaction with their sex life and their general relationship satisfaction. For both questions they were given the following scale of options:

Sex drive can fluctuate over time, but relationships and the intimacy within them don’t have to suffer. If someone you know would benefit from the information in this project, you may share for any noncommercial reuse. Please link back here so the entire project and its methodology can be reviewed. This also gives credit to our contributors, without whom we wouldn’t be able to do this work.