What are the symptoms of genital herpes?

What to look out for

What are the symptoms of genital herpes?

What to look out for 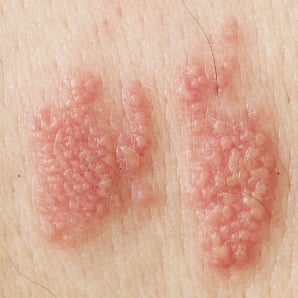 "Genital herpes outbreaks can differ in severity. While some people encounter multiple painful blisters, some only have one single sore."

What do herpes sores look like? How do you know whether you have herpes? Find out which symptoms herpes causes and how to spot the first signs.
Last reviewed: 12/03/2020 by Dr Simran Deo

What are early symptoms of genital herpes?

The first symptom of genital herpes that you are likely to notice is the inflammation of the skin on your genital area, which may burn or itch. This symptom often occurs within 1-2 weeks of being infected As the herpes episode progresses, blisters and ulcers develop. When the symptoms begin to subside, the ulcers form scabs, which then gradually disappear.
Typical Symptoms during the early stages include:
However, the incubation period of genital herpes varies and some people do not experience the first herpes outbreak until months or even years after infection.
When it occurs, the first outbreak may last for several weeks. Once the genital herpes symptoms have subsided, the virus becomes dormant again until something triggers a new outbreak.
Recurrent outbreaks tend to be less severe and pass quicker. Usually, patients learn to recognise the early signs of a herpes episode, which allows them to begin antiviral treatment promptly.

Genital herpes sores develop in several stages. When you notice the first symptoms such as tingling and itching you may not be able to see any sores. Over the course of the coming days, blisters will form. The blisters tend to be red at first and they soon fill with liquid that is often yellow. Eventually, the blisters burst and then heal.

Can herpes cause just one sore?

Genital herpes outbreaks can differ in severity. While some people encounter multiple painful blisters, some only have one single sore. It is not uncommon for the symptoms to be so mild that they go unnoticed.

Where on your body can you get herpes sores?

The symptoms of genital herpes in women are essentially the same as in men. Because genital herpes affects the private parts, people often wrongly assume that the virus looks different in men and women.

In men, genital herpes sores can appear inside or on the:

In women, the herpes blisters or sores can appear on the:

In the case of female genital herpes, patients often experience pain when urinating and notice unusual vaginal discharge. Blisters inside the vagina can take up to three weeks to heal completely. Inflammation of the cervix (neck of the womb) can also be a sign of female genital herpes. If you are infected with herpes at a late stage during pregnancy, you must consult your  doctor or midwife.

How long does a herpes outbreak last?

How can I manage the symptoms?

In addition to taking antiviral tablets you can alleviate symptoms by trying the following:

Herpes outbreaks - how often do the symptoms recur?

Some people have only one herpes outbreak and then may not suffer from it again while others may suffer numerous episodes a year. On average, the number of outbreaks and the symptoms they cause also depends on the type of herpes virus you are infected with.
Recurrent outbreaks tend to be less severe than the first. They usually don't take as long as the first outbreak to resolve and you are likely to have a smaller number of blisters.

How can I prevent herpes outbreaks?

A healthy immune system tends to keep the virus at bay, so living healthily and eating a balanced diet may help to prevent recurring outbreaks.
Avoiding excessive alcohol consumption is thought to reduce the chance of outbreaks. Some patients find that stress increases their risk of a herpes episode. In some cases, sunburn has also been found to be a possible trigger. However, no one really knows the exact triggers.
When you start to feel the symptoms of an outbreak you can start taking aciclovir tablets straight away to keep the outbreak to a minimum.

At the beginning of a herpes outbreak, you may experience a tingling, itching or burning sensation. As the episode progresses blisters may form and as they do the itching sensation usually stops and the blisters start becoming painful rather than itchy.

I have herpes symptoms. Does that mean I can pass the virus on?

Genital herpes symptoms differ between patients. While some people develop the blisters within a week of infection, others do not experience any symptoms. The most common early sign of a herpes outbreak is a burning or itching sensation on or near to the genitals.
Some people carry the herpes virus without developing any symptoms of it. This makes it easy to pass on to others. The virus is particularly contagious when blisters form to the time the scabs heal off completely, but you can pass it on even if you don’t have symptoms.

I have herpes symptoms - What should I do?
1. Get diagnosed
Sores or bumps on your genitals can be caused by a range of conditions. You should see a doctor or you can use our online photo diagnosis to get diagnosed. If you have sores present you can also get a swab test to determine if herpes is the diagnosis.
2. Get treated
Antiviral medication helps your body to fight the herpes virus and speeds up recovery from it. You can get treatment for it from your GP or order online from Superdrug Online Doctor.
3. Prevent further outbreaks
Following a healthy lifestyle and avoiding stress are believed to help reduce the risk of recurrent outbreaks. You may also notice that certain things trigger outbreaks, which will help you to avoid these in the future, therefore reducing your outbreaks. If you suffer from 6 or more outbreaks in a year you may wish to consider suppressive treatment.