But just how many people are actually talking about their sexual desires openly – or better yet, actually letting their partners in on the secret? Studies have shown proper communication is one of the most important ingredients to a healthy sex life (at any age) and a happier relationship overall.

To learn more about the sexual fantasies couples may share, we surveyed over 1,500 men and women in Europe and the United States about the kinds of scenarios that get them hot and bothered. We wanted to know if these fantasies make for happier sex lives, what most people think their partners are fantasising about, and how they relate to our relationships.

As it turns out, fantasising about someone other than your significant other isn’t that uncommon, and it might not be having such a bad impact on your relationship either.

Our analysis revealed that sexual fantasies in relationships are common, but there’s no need to be alarmed by this. Sex experts suggest dreaming about sleeping with someone else doesn’t necessarily mean you’re inclined towards infidelity. Even if it’s not about any one person in particular, letting your mind wander in the heat of the moment can be a perfectly normal sexual stimulation.

While men and women who said they didn’t share this fantasy were more likely to rate their overall relationship status as very satisfied, more than 4 in 5 fantasisers rated themselves as either satisfied or very satisfied with their companions. Fantasisers were also more likely to admit being either very disappointed or disappointed in their relationships, though relationship counsellors generally agree communication (or lack thereof) is typically at the heart of discord between couples. 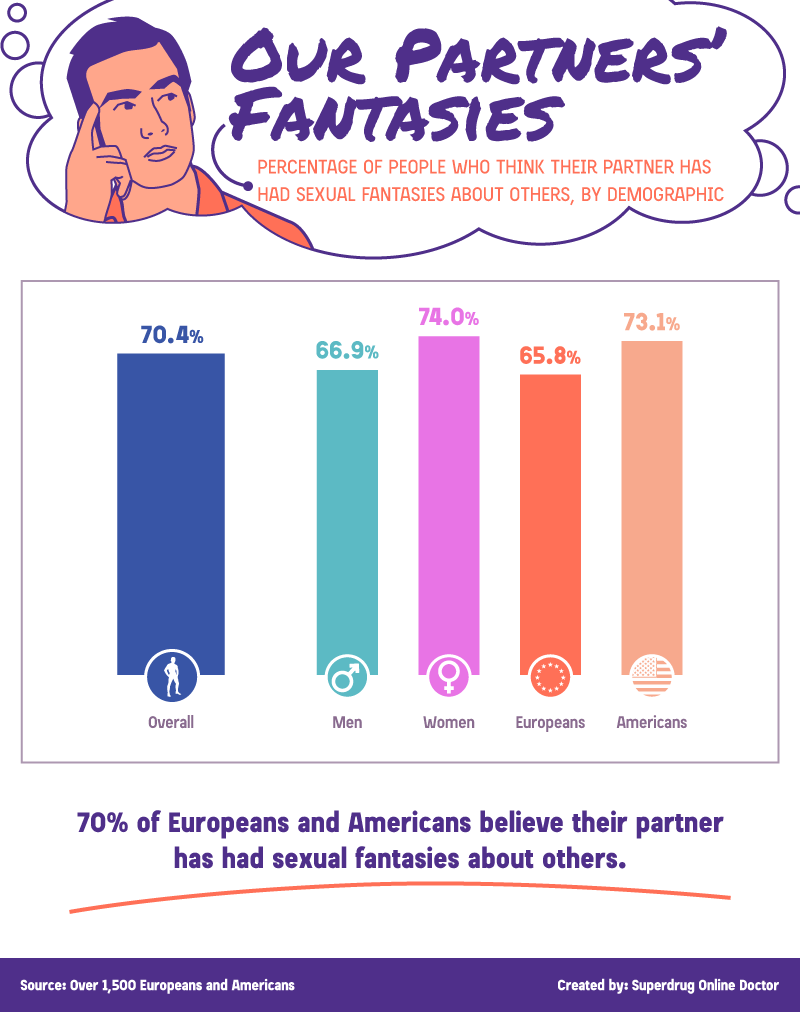 Despite the common nature of sexual fantasies involving other people, Europeans and Americans thought it was less likely their partners were envisioning these intimate moments with someone other than themselves.

Seventy percent of people believed their partners might be fantasising about another person, with men more in the dark than women in regard to their significant other’s sexual desires. Nearly 67 percent of men acknowledged their partner might have sexual fantasies about other people, compared to 74 percent of women. Like men, Europeans (about 66 percent) were generally less aware of those desires than Americans (73.1 percent).

Since there aren’t really rules about what is or isn’t OK in a relationship (except the ones you establish together), sexual fantasies can be something you build off of mutually rather than feel ashamed or embarrassed over. While experts suggest the occasional fantasy can be perfectly healthy, repetitive fantasies about the same person can start to make you feel dissatisfied in your real-life relationship. 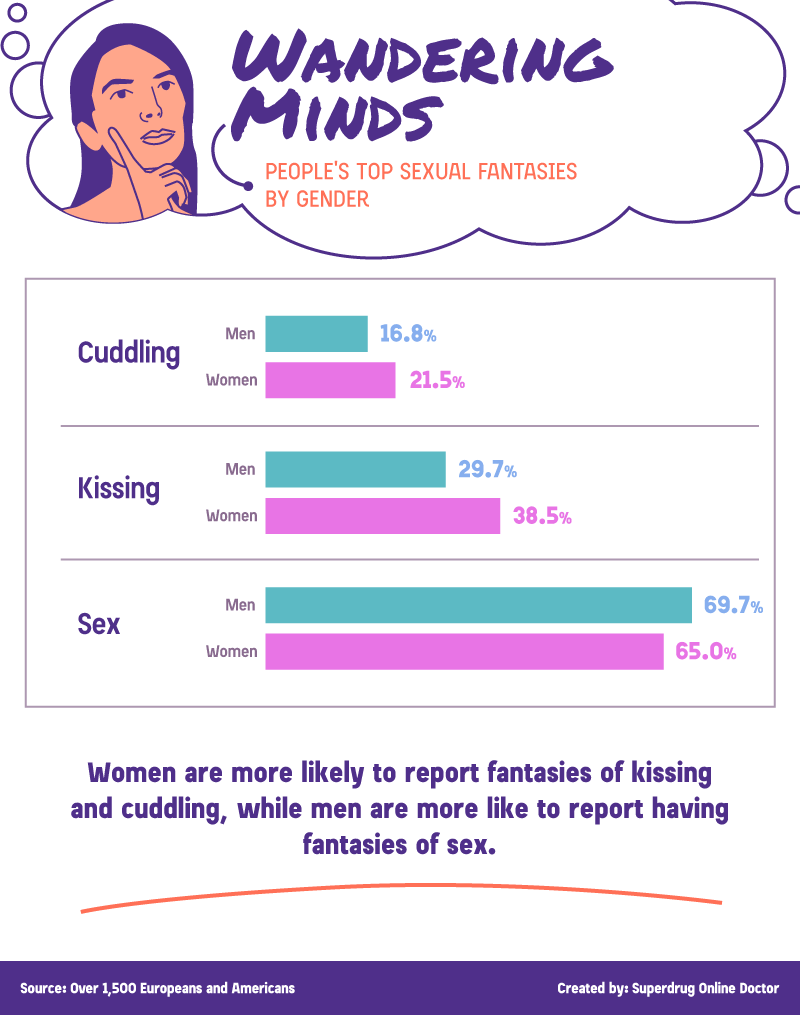 So just who are these other people and what do we imagine ourselves doing with them? Not everything has to be about sex, and while most people who admitted to fantasising generally envisioned more explicit interactions, some imagined themselves kissing or cuddling.

The physical act of kissing can be just as important to a healthy relationship as sex, and while kissing sometimes has a deeper meaning (like relationship compatibility or love), other times it’s simply about feeling aroused. When asked about their sexual fantasies, women were more likely than men to dream about kissing their friends, exes, and complete strangers. On the other hand, fantasies about sex were more common among men, who were 13 percent more likely than women to fantasise about having a roll between the sheets with an ex.

Like other sexual fantasies, dreaming about an ex doesn’t have to be a negative experience and may not signal you want that person back in your life. According to one expert, imagining yourself with an ex could simply be a sign that you’re still processing the breakup or that you’re worried similar things could be going wrong in your current relationship. In either case, communication could be the key to overcoming these potentially alarming illusions. 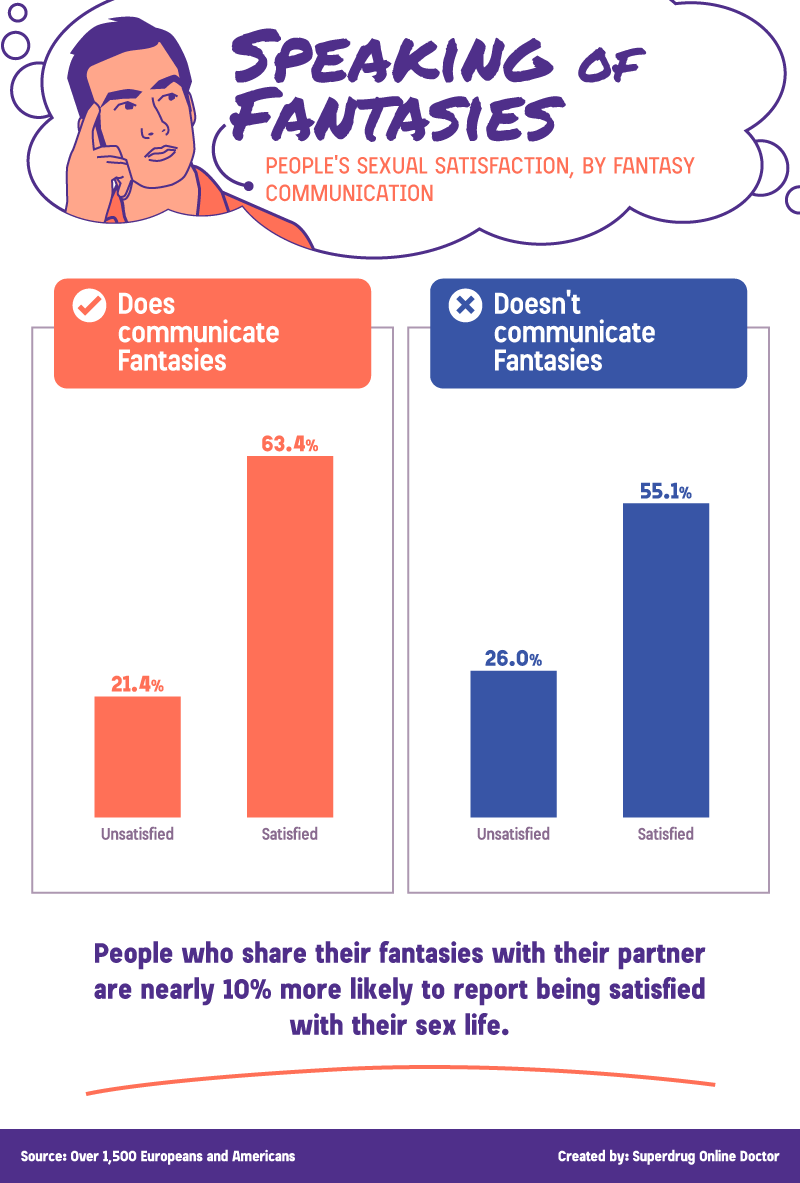 It’s been said that the two most important elements of a successful relationship are communication and actually getting to know your partner. Our survey revealed the same rules apply to sexual satisfaction as well.

People who share their fantasies with their partner are nearly ten percent more likely to report being very satisfied with their sex life.

Successful communication doesn’t always mean focusing on what turns your partner on, either. Making sure you’re sharing what matters to you (including the things that get you excited) helps your partner recognise your sexual needs. When one partner (or both) starts to feel sexually frustrated, communication is often at the core of what’s missing in the bedroom. 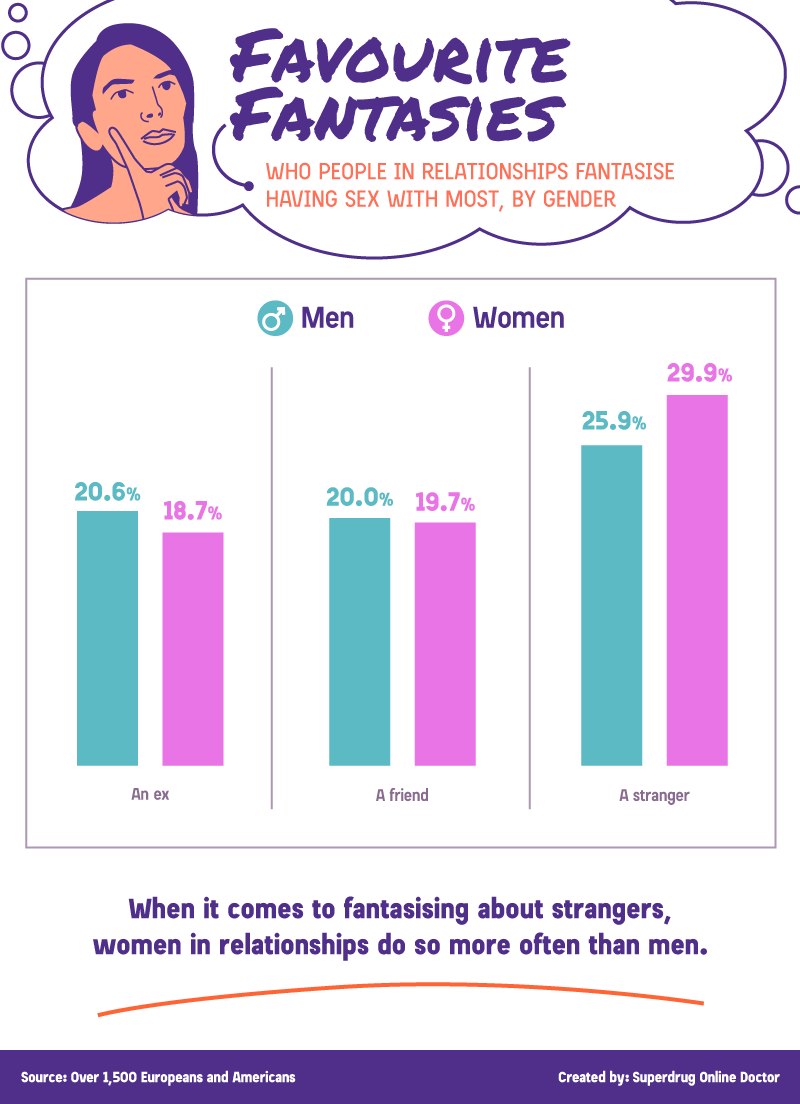 Even if most people don’t want to talk about it, getting intimate with a stranger is one of the most common sexual fantasies couples share and even more popular among women than men. Nearly 30 percent of women and 26 percent of men admitted to fantasising about someone they didn’t know, more than either a friend or an ex.

The idea of getting physical with someone you don’t know can feel exciting and a bit risqué. Instead of imagining someone finding you attractive for your personality or other wholesome attributes, the anonymity of kissing or having sex with a stranger helps people imagine someone being drawn in entirely by their physical attractiveness or sex appeal. You don’t have to worry about getting to know each other or any of the complications that accompany an actual relationship; this fantasy can be purely physical.

Getting Your Groove On

A majority of Europeans and Americans surveyed confessed that sexual fantasies were a fact of life, While some people said they envisioned kissing or cuddling their exes, strangers, or friends and acquaintances; visions of sexual encounters were far more popular. Still, despite largely not sharing these fantasies with their partners, sex experts suggest dreaming about having sex with someone else can be a perfectly harmless fantasy.

At Superdrug Online Doctor, we specialize in being a place for men’s and women’s health, sexual health, and travel health. While fantasising about others is often part of healthy relationships, the stress that can come with it from the lack of that knowledge may be contributing to impotence and other health concerns. We offer more an array of online subscription treatments and are here for a consultation for any questions you may have. Visit us online at onlinedoctor.superdrug.com today to learn more.


Feeling a little more confident about your own sexual fantasies now? Feel free to share this study with your readers for any noncommercial purpose, just ensure a link back to this page so our contributors get a piece of the action too. For any questions or concerns, email us at [email protected].