Honest and open communication is often easier said than done, especially when it comes to libido. Even harder still is discussing libido when it’s low or has remained low for a while. But with the pandemic rattling the world and libido being tied to many of those rattled emotions, it’s time for the conversation.

To help facilitate this, we recently spoke to more than 1,000 people – some from the UK, and others from the U.S. – all of whom had experiences with low libido at least a few times each year. These responses provided us with a unique look into how COVID-19 has influenced libido levels and the ways in which people are attempting to address low sex drive. Read on to see what we discovered.

Rest assured that no matter where on the sex-drive spectrum you fall, you’re not alone. It became immediately obvious in this study that the pandemic is influencing libido in such a wide variety of ways that there wasn’t necessarily a clear trend across countries, genders, or even generations. 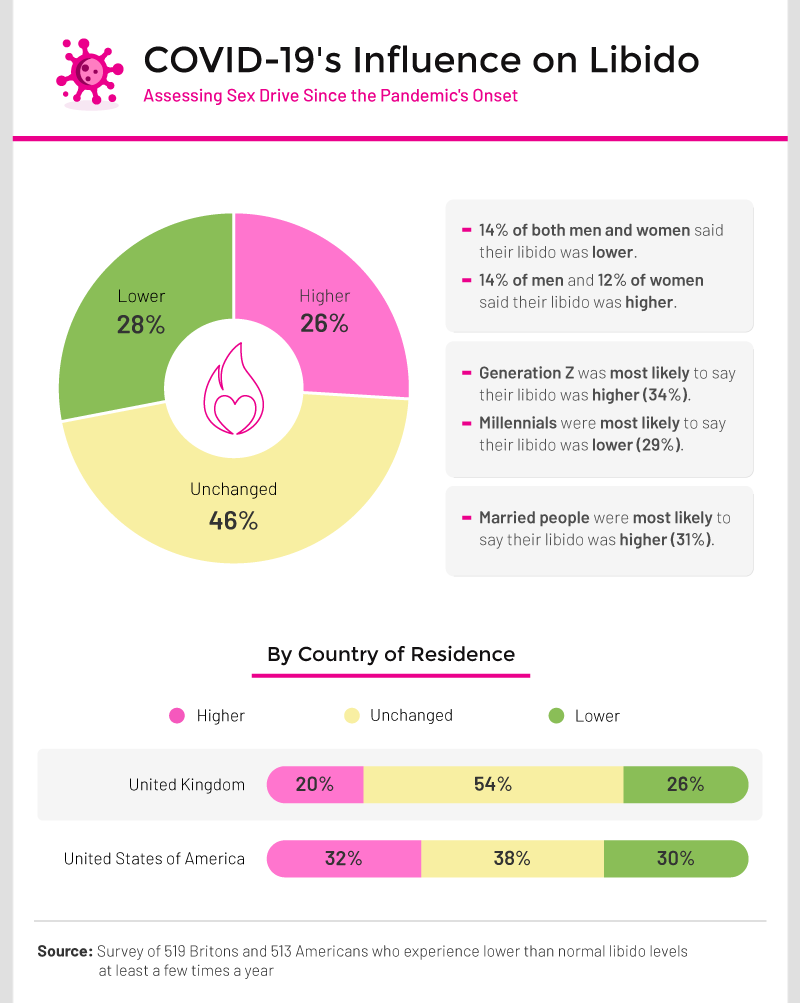 While many often turn to intercourse as a source of release or pleasure amidst anxiety, the anxiety from the pandemic itself may be preventing sexual desire in the first place. Everyone appears to be having different experiences and methods of handling the fallout of the pandemic, but the mixed bag that was libido looked a little something like this:

When we segmented respondents by country, however, we noticed something a little more stark. While sex drive in the UK remained largely unrattled, respondents hailing from the U.S. were much more likely to experience some type of sexual shift, whether that was a lower or higher libido. Interestingly, both countries had been experiencing a general decline in sex for decades prior to the pandemic. Both countries were also severely criticised for their handling of the pandemic, in spite of being ranked first and second most poised for such an event. That said, the U.S. has experienced more COVID-19-related deaths and an overall worse economic fallout, which perhaps explains the more intense rattling of its citizens’ libidos. Our study continued to dig into country differences after this phenomenon presented itself.

If You Could Change Your Sex Drive…

What would your ideal libido be? Respondents mulled over this question and shared their answers. Even if they felt their libido unchanged by the pandemic, many still desired to want sex more. We again segmented by country and asked each nation how often they declined opportunities for intercourse.

Nearly half of respondents wanted a higher libido, even if the pandemic had already accelerated it. This was especially true for Gen X, or those aged between 41 and 55 years of age. This particular age range often deals with changing hormone levels and menopause for women, so it makes sense that they may be feeling nostalgic for a previously youthful sex drive. Women of this age, and in general, were even more likely to wish their sex drive would increase these days.

Those in the UK were much more likely than those in the U.S. to wish their sex drive was higher at the moment. Though the U.S. has seen a falling sex rate for decades, it’s the UK that has been experiencing declining birthrates, which perhaps puts a greater emphasis on the need for libido than just sexual fulfillment. In spite of the plummeting birthrate, which is at its lowest since birthrates began to be tracked, respondents in the UK are still nearly twice as likely to say they always decline opportunities for sex.

When we asked respondents what they thought caused their low sex drive, mental health in a variety of forms topped the list. Fear, stress, and anxiety are all normal responses to the uncertainty caused by the global health pandemic and it is understandable that many people may be finding themselves experiencing these emotions more frequently. It can be even more distressing when one finds these emotions resulting in negative experiences with their sex drive or causing performance-related anxiety. If one thing was clear though, respondents’ were not alone in these experiences. 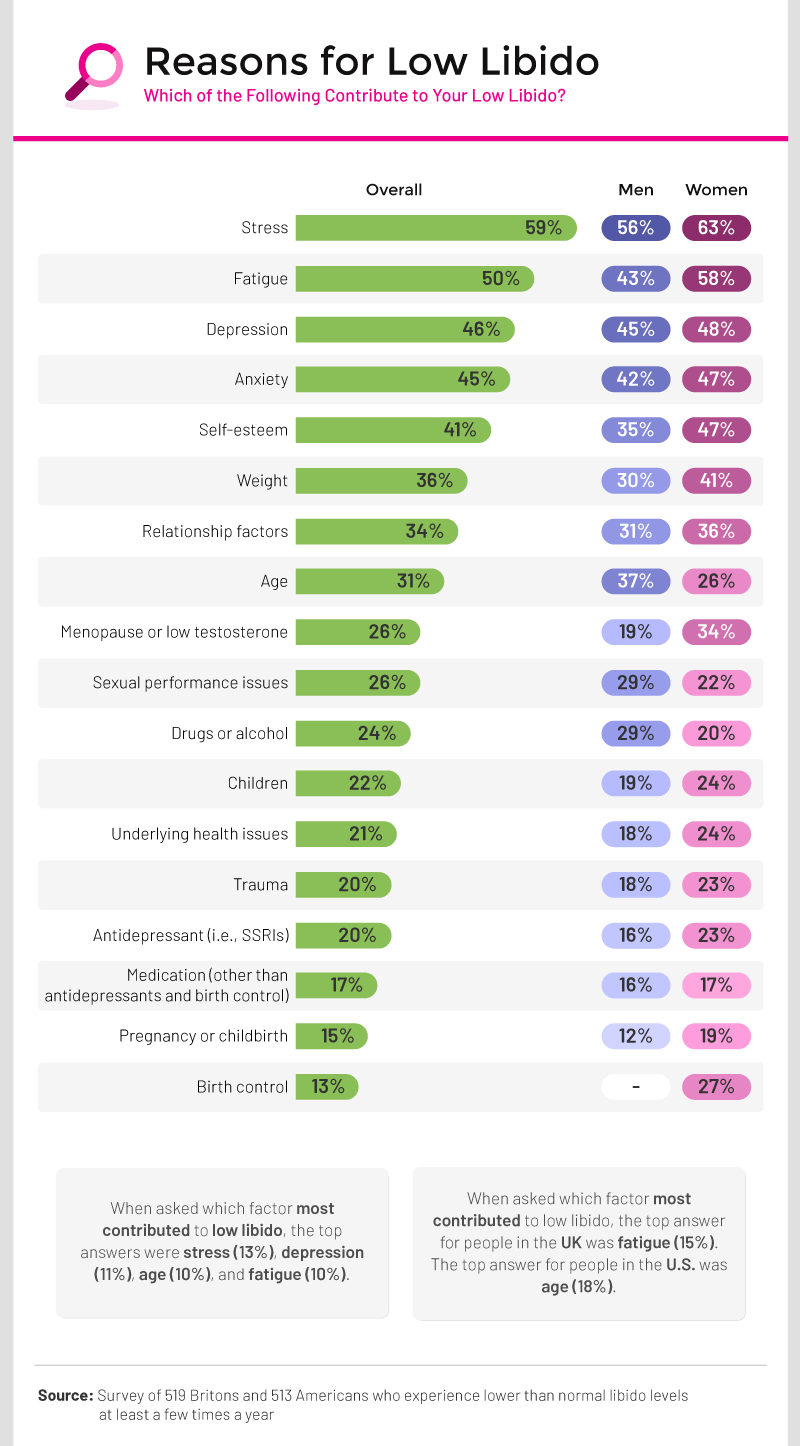 Stress was the number one barrier to a higher libido, according to respondents with low libido experience. Fifty-nine per cent called out stress as the culprit behind their lowered sex drive, but women in both the U.S. and UK were especially adamant it was the reason. Even without a medical degree, these respondents intuitively understood the impact that stress was having physically. Stress actually causes arteries to tighten and hormone levels to be disrupted, both of which prevent arousal. Especially in a post-pandemic world, it’s understandable that stress would cause libido levels to drop lower than normal. Based on our respondents’ answers, it’s clear this is a common experience for many. If you experience stress as well, make sure you are continuing to nourish your body with healing foods, practice deep breathing, and find time to exercise in order to detox from stress-related chemicals

Stress wasn’t the only emotional barrier to sex. Forty-three per cent of people said their low libido was caused primarily by psychological factors, while only 16% blamed something physical. Half mentioned fatigue, 46% cited depression, and 45% mentioned anxiety as a catalyst for their low libido. Another negative consequence of these factors is the potential to fall into a vicious cycle of performance-related anxiety.

That said, there were physical barriers that surfaced more frequently for those who took medication. Twenty per cent of respondents said their antidepressant lowered their sex drive. Bear in mind that this is 20% of all respondents. Of those who took antidepressants, the percentage is likely much higher. Twenty per cent of women also said their birth control was negatively impacting their sex drive. Unfortunately, it is the sex drive of women that often suffers the largest consequences from birth control as well as antidepressants. Getting that drive back and regaining the depression it was meant to prevent creates a painful catch-22 for many sufferers of emotional turmoil.

When we asked respondents how they addressed the low libido they experienced, the most common answer we heard was changes to sex life (28%). The following graph shows some of these specific sexual changes as well as other methods used to fix a libido problem. 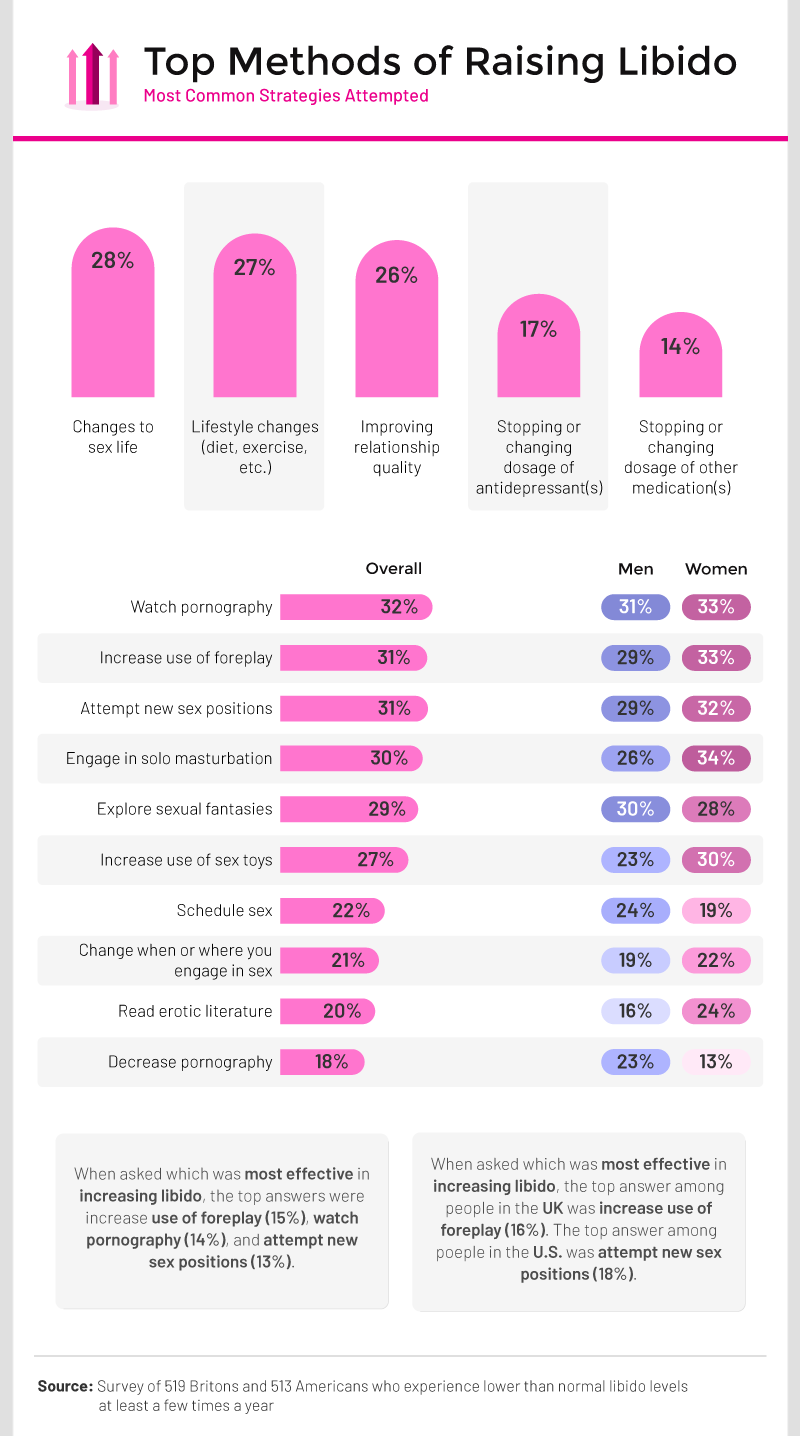 Foreplay was also a helpful and common approach to increasing arousal. Women were especially keen to try this, and both the UK and U.S. agreed this was the number one most effective method to improve libido. Science tells us that foreplay, especially for women, prepares the body and mind for sex. Both lubrication and mental stimulation can be improved by increased foreplay so it’s definitely worth a shot if you’re experiencing libido issues as well.

Those who experienced low sex drives due to medication and were also compelled enough by their low libido to try forgoing it in order to reclaim their sex drive. While neither gender listed this as the most effective method for regaining libido, it’s important to emphasise that you should consult with your doctor or physician before making any changes to your medication use.

We knew that discussing a less-than-ideal sex drive wouldn’t be an easy conversation to have, and respondents shared that sentiment: More than 90% found it at least slightly difficult to broach the topic with someone. Some did push through the discomfort, however, and had the conversation with a variety of people. 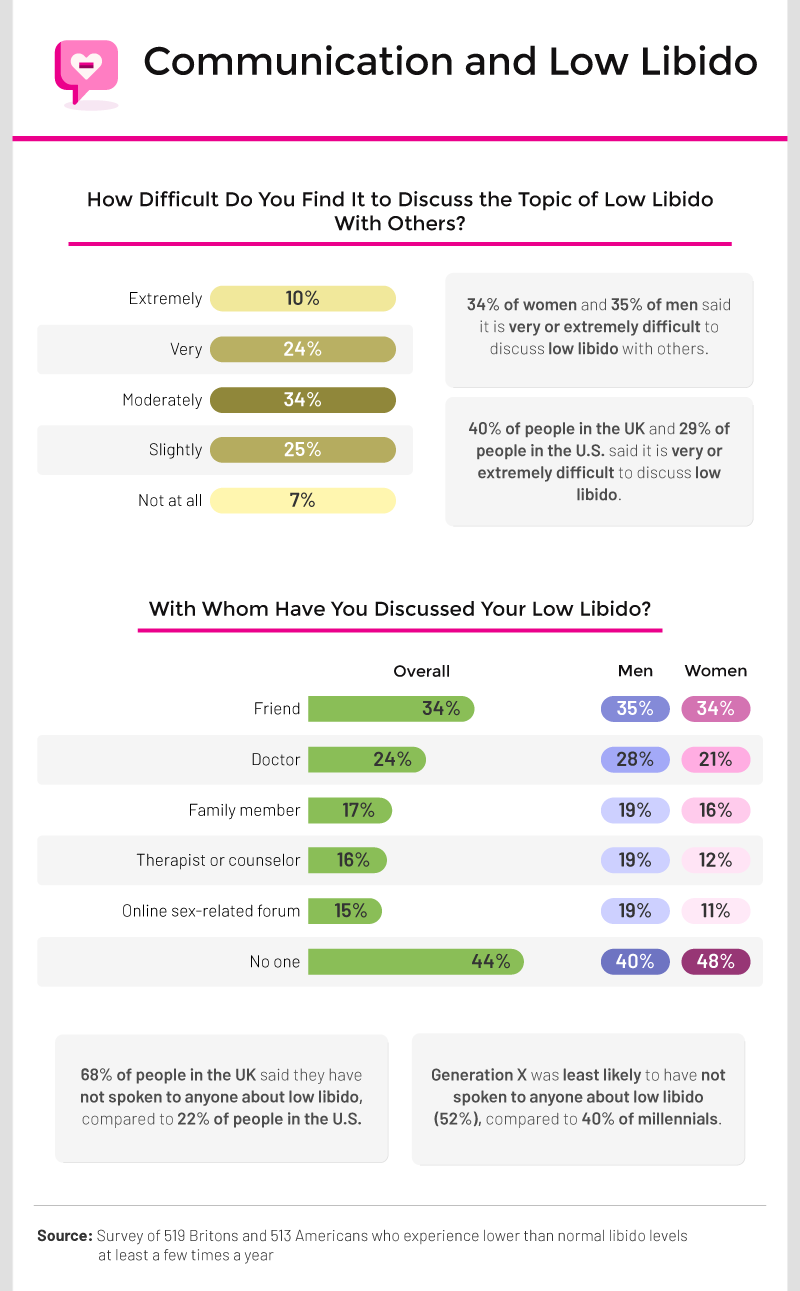 Even though respondents had shared a variety of sexual and lifestyle changes they’d made, the thing they most often shied away from was actually discussing the issue. Overall, 44% of respondents said they had shared the information with absolutely nobody, with women being more likely than men to keep it a secret. Bear in mind that this is also from a pool of respondents who all shared similar problems with their libido.

We also found another reason why those in the UK may have been wishing for a higher libido so often: They were much more likely to treat a low sex drive as a secret than those in the U.S. While 68% of people in the UK said they had never shared this information with anyone, only 22% of people in the U.S. could say the same. This means that people in the UK were three times as likely to keep a low libido issue to themselves instead of seeing a doctor or even talking to a friend. If you are silently dealing with the impacts of low libido, just know that the experience may be more common than you think and that honest and open communication is always a good idea.

Keeping Your Chin (and Libido) Up

Even though sharing personal and sexual information may not be easy for you, your decision to move through the discomfort and normalise the discussions can actually make it easier for those that come after you. After all, the primary reason it’s so hard to discuss is that so few people actually do it! At Superdrug Online Doctor, we have these conversations each and every day. It’s what we do.

Superdrug Online Doctor is an inclusive, sex-positive online resource with doctors on hand to answer some of your most personal questions. You can receive advice when you need it most and consult with our experts to find the answers you need.

We conducted a survey of 1,032 people who experience lower than normal libido levels at least a few times a year. We then asked them questions about their experiences with lower-than-normal libido.

Nineteen per cent of respondents were single, 34% were in a relationship or engaged, 46% were married, and 1% were separated, divorced, or widowed.

Sixty-four per cent of respondents indicated their sexual orientation as straight or heterosexual, 24% as bisexual, 4% as gay or lesbian, and 8% as an option not listed by the study.

It is possible that with a greater sample size of certain demographics, we may have been able to gain better insights into their opinions and experiences. These results are based on means alone and, as such, are presented here for informational purposes.

We know things like low libidos aren’t easy to discuss, but the more we share, the easier it becomes. If you know someone who may benefit from the findings in this study, you are welcome to share the information. Just be sure that your purposes are noncommercial and that you link back to this page so its contributors can receive proper credit for their work.