Modern-day courtship doesn’t resemble anything like what we see in the movies. Instead of bumping into a cute stranger at the coffee house, or a friend insisting you meet an available person at their party, we can now virtually swipe or choose options on a drop-down menu to let interested suitors know our current relationship status.

Given the ease of making our intentions known, is there a point when scrolling through a person’s Instagram profile, replaying their Snapchat stories, or rummaging through their Twitter history transitions from intrigue to obsession?

While the attraction may be real, we profiled 500 Europeans and 500 Americans about the digital pursuits that cross the line from cute to creepy. What online activities are normal for a budding crush, and what behaviours are wildly inappropriate? Keep reading to discover the answer.

A Spectrum of Weird Online Activity

European and American women were in agreement about the creepiest online behaviour – having someone try to log in to their social media.

After that, women felt attempts to track their location and then fake “accidental meet-ups” based on location data were some of the most disturbing acts of a social courtship. In these instances, both men and women might consider reaching out to the National Stalking Helpline online, or by calling 08088020300, to ensure something slightly creepy doesn’t turn into something potentially dangerous.

Men, on the other hand, were most unsettled by someone attempting to track their location. However, American men were slightly more spooked by this behaviour than their European counterpart. In fact, location tracking and trying to obtain social media account access both bothered American men more than the top concern for European men.

Looking at someone’s social media account for a couple of minutes was the most innocuous behaviour for men and women. 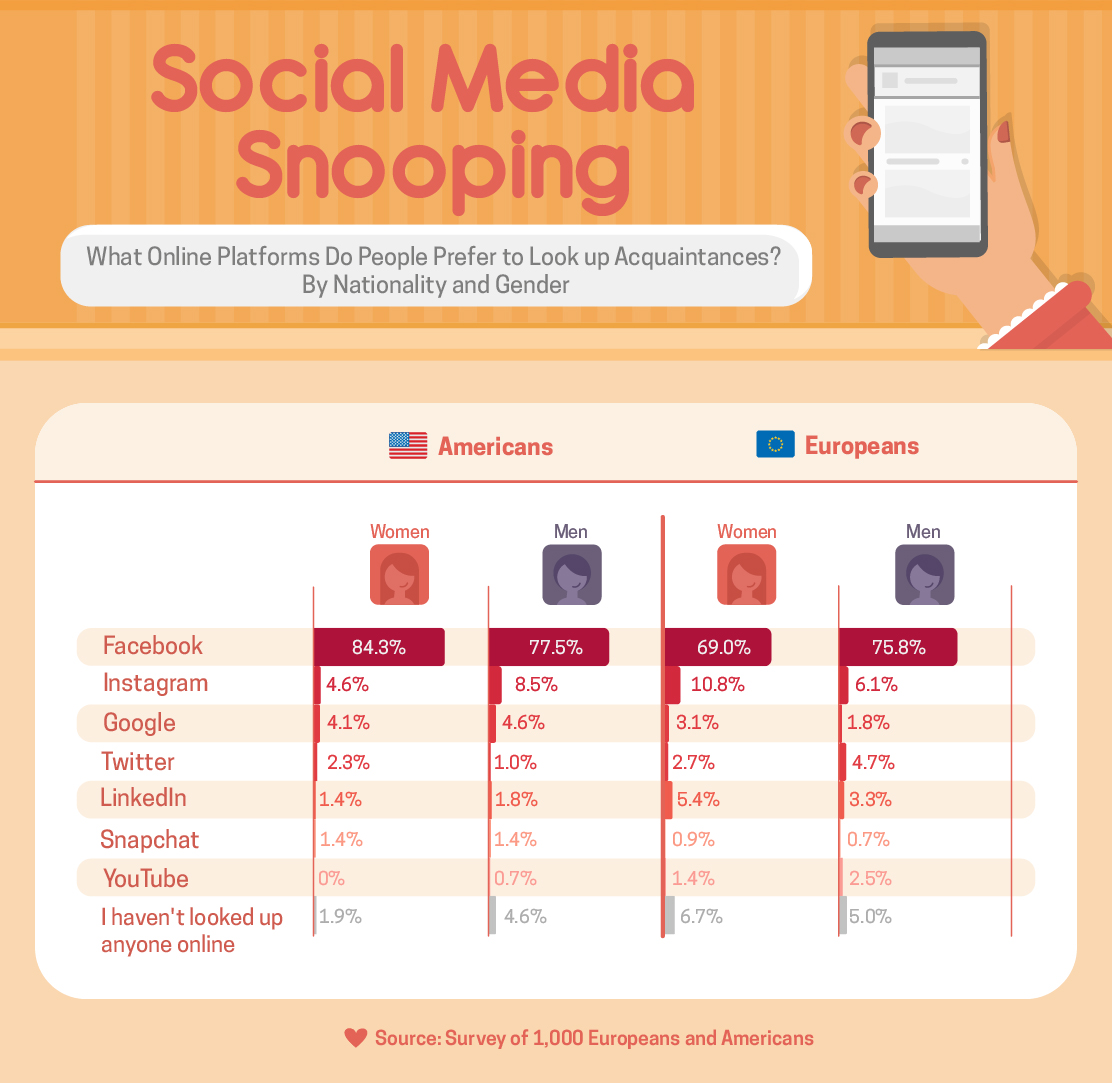 European and American men and women preferred to look up someone on Facebook – with nearly 85 percent of women using it most. Thanks to its nearly 2 billion active users, finding someone on Facebook should prove to be at least a good starting point for getting to know someone better. So, on the flip side, if facebook is the first stop for potential snoopers, then it’s important you keep on top of your privacy settings and protect yourself from prying eyes.

Creeping Closer Toward the Truth 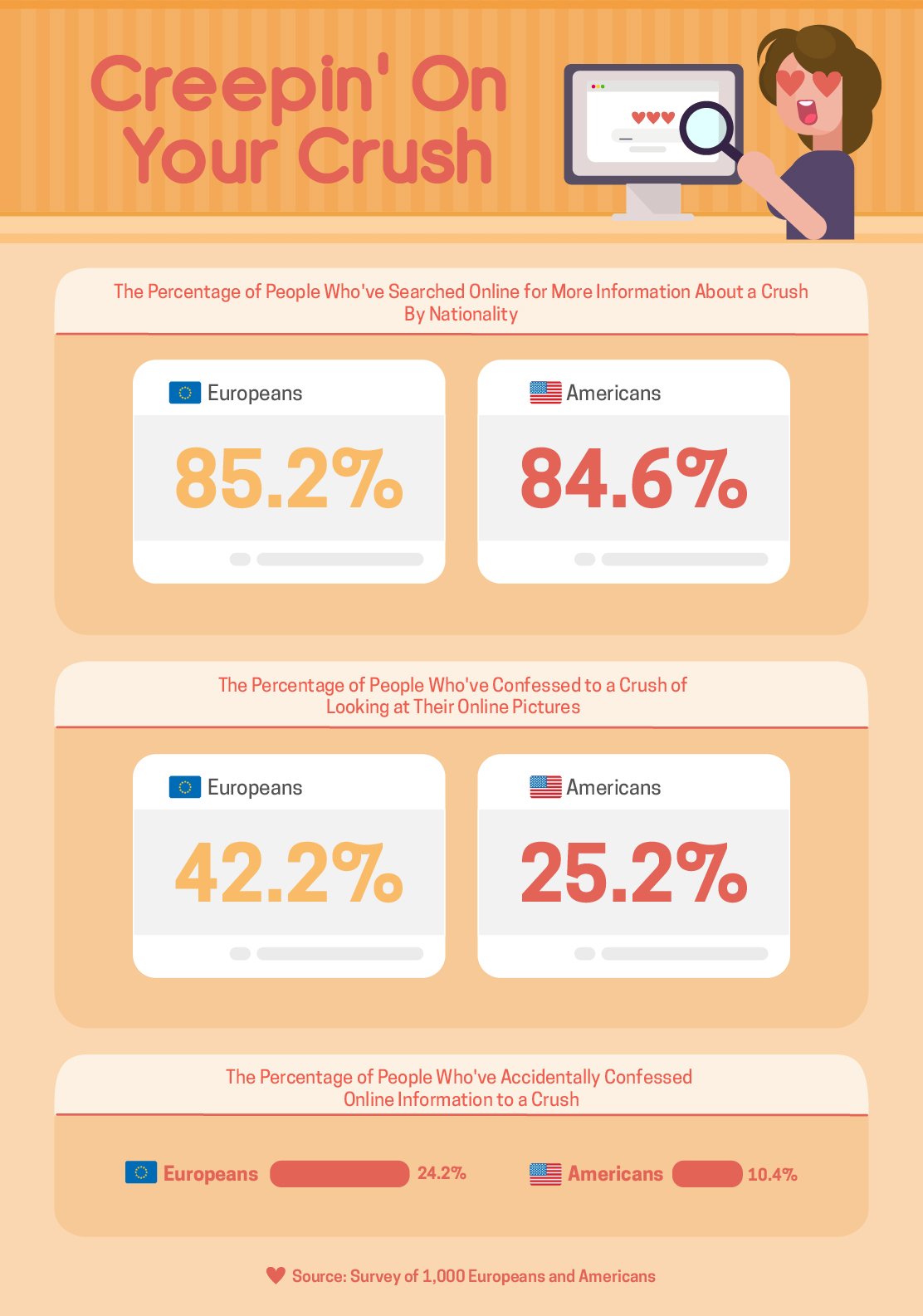 Around 85 percent of Europeans and Americans have searched online for more information about a crush. However, more Europeans fessed up to flipping through pictures of their digital darling (over 42 percent). It was Europeans as well, though, that more often accidentally confessed their online activity to their crush, with nearly 1 in 4 people letting the truth slip.

It’s possible with this online reconnaissance you could uncover information you’d only know if you were a close friend. Almost a quarter of Europeans inadvertently slipped and mentioned a piece of information they acquired in their “research” of that person, while Americans did a better job keeping their intelligence classified: Just over 10 percent slipped up in front of said subject. 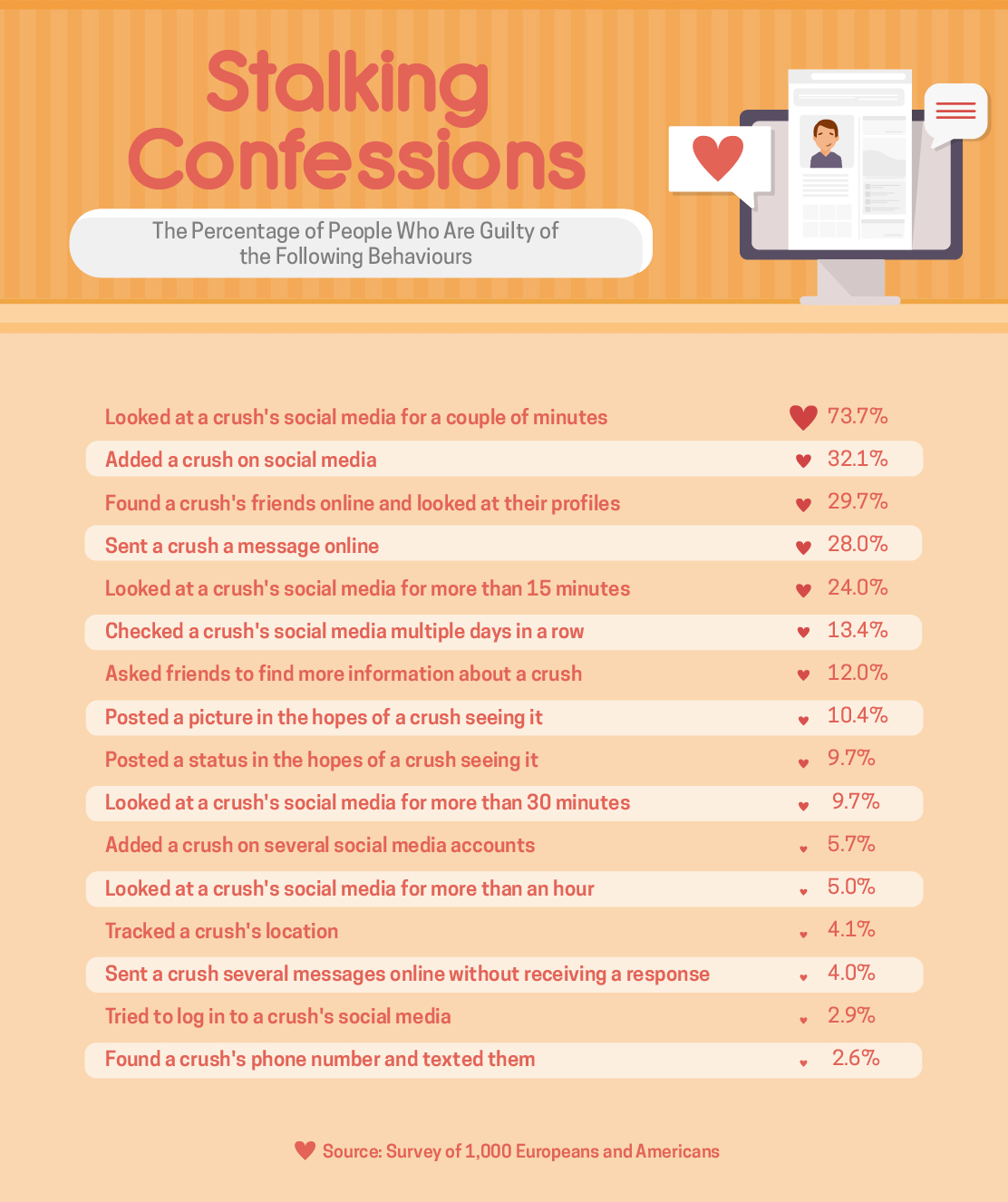 Nearly 74 percent of respondents confessed to looking at the social media profiles of their crushes for a few minutes – perhaps because it helps them get to know the person or at least gives them a good idea of the kinds of interests worth starting a conversation over. Adding crushes on social media and examining their friends’ profiles on social networks were additional acts in which some were guilty (around 30 percent each).

However, other online behaviours deemed the creepiest – such as tracking the location of an individual – were only undertaken by less than 5 percent of participants. Under 3 percent of people attempted to log into a person's social media accounts, and sending someone an uninvited text message was attempted the least. If you think you’re location is being tracked without your consent, you may want to reach out for help in case someone’s online behaviour crosses a line. 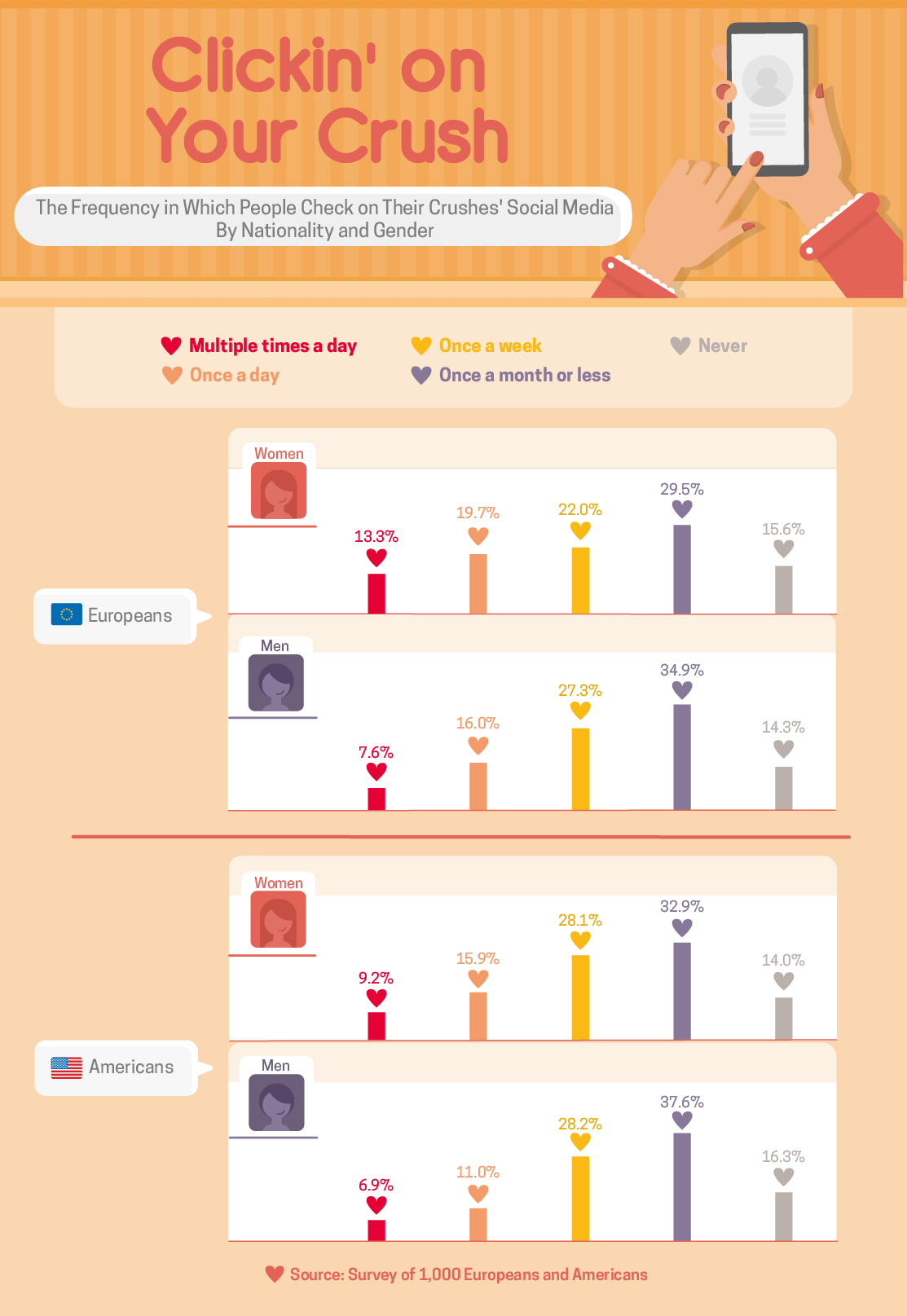 On average, Americans were more likely to check on their crushes once a week – with around 28 percent of American men and women following up on someone weekly.

But European women checked up on their crushes more frequently than anyone else. In fact, 33 percent followed their crushes’ social media accounts at least once a day, while others showed a little more control. Less than 10 percent of European men, and American men and women, checked multiple times a day. So while looking at crushes if pretty normal, it could become an unhealthy habit. Finding other ways to distract yourself, talking about the crush with friends, or simply writing about it can all provide an increased sense of self-control. 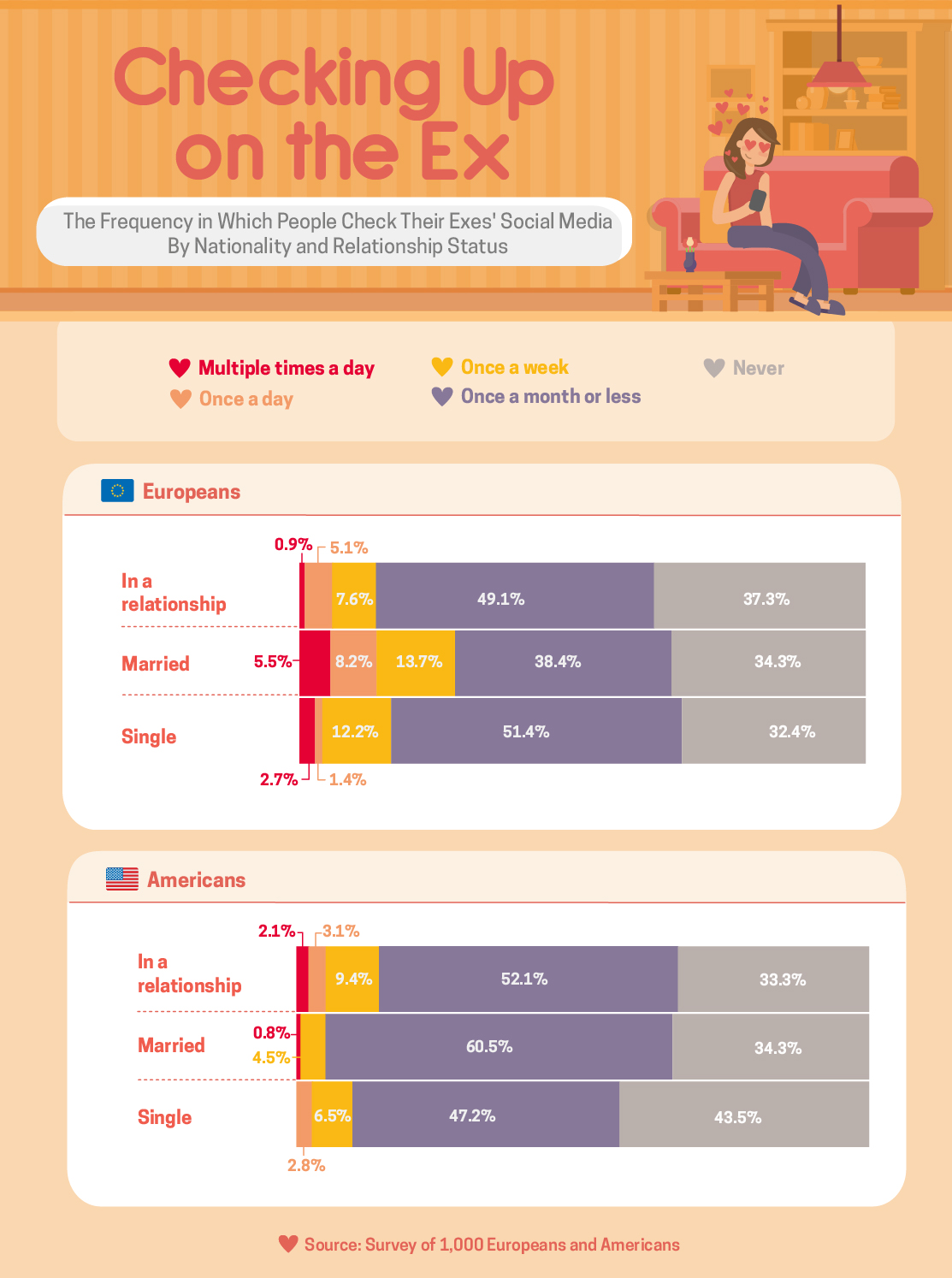 Married Americans, however, most often checked in on ex-partners once a month or less (nearly 61 percent). Those who were in a relationship but not married were only slightly less likely to check in at a similar rate, but still reported that more than half made sure to check up occasionally. But single Americans were the least likely to check in on an ex at all.

While you may not associate a peek at a profile or following up on a former lover as stalking, most people think these actions are somewhat creepy. Keep in mind that excess time spent on a person’s or their friends’ social media profiles or confessing details learned while researching the person, may take away from actually getting to know someone. If someone's online stalking goes a bit too far, consider reaching out to the National Stalking Helpline for advice on how to prevent your safety from being compromised.

When you finally get around to going out with your crush rather than just lurking on their Facebook or Instagram, or you’ve moved on with someone else, we want you to feel confident wherever the night may lead you. At Superdrug Online Doctor, we take care of your sex health needs. Our website is secure and confidential, so you don’t have to go out of your way to live healthy and happy. Visit us online today at Superdrug Online Doctor to learn more.

For this project, we surveyed 500 Europeans and 500 Americans to determine the online behaviours they most associate with stalking. We asked participants to rate behaviours as well as answer personal questions related to looking people up online, in person, and more.

Think your readers might interested in how other people see online stalking? We’d love to see our research featured on your site for any noncommercial use, but please ensure a link back to this page so that our contributors earn credit for their work. If you have any questions, feel free to contact [email protected]