Sure, some habits are better left practised in private. We’re looking at you, public nose-pickers, open-mouthed chewers, and elevator farters – spare the rest of us your eccentricities. But even those with impeccable manners can admit: We exhibit odd quirks when we’re alone.

Maybe we mutter to ourselves or skip a shower when there’s no one else to impress. Or maybe we do shower, but multitask by taking a leak while we’re at it. And who hasn’t been tempted to sample the scent of their own flatulence? Whatever our private patterns, we let our idiosyncrasies show once we’re safe from the pressure of keeping up appearances.

But that’s the thing about these habits: We usually reserve them for moments without witnesses. That means we never know if we’re the only ones engaging in these behaviours. As a result, we’re all left wondering if we’re somehow defective, without the comfort of confirmation that other people do the same things.

Until now, that is. We surveyed over 1,500 Europeans and Americans about a range of acts they’d normally be afraid to admit. Our results showed that many of the habits we’d be ashamed to acknowledge publicly are actually quite common. By proving we’re not alone in our weirdest practises, we hope to show that no one need judge themselves about the odd things they do in their own homes.

Read on to see how your private habits stack up to those of the crowd. 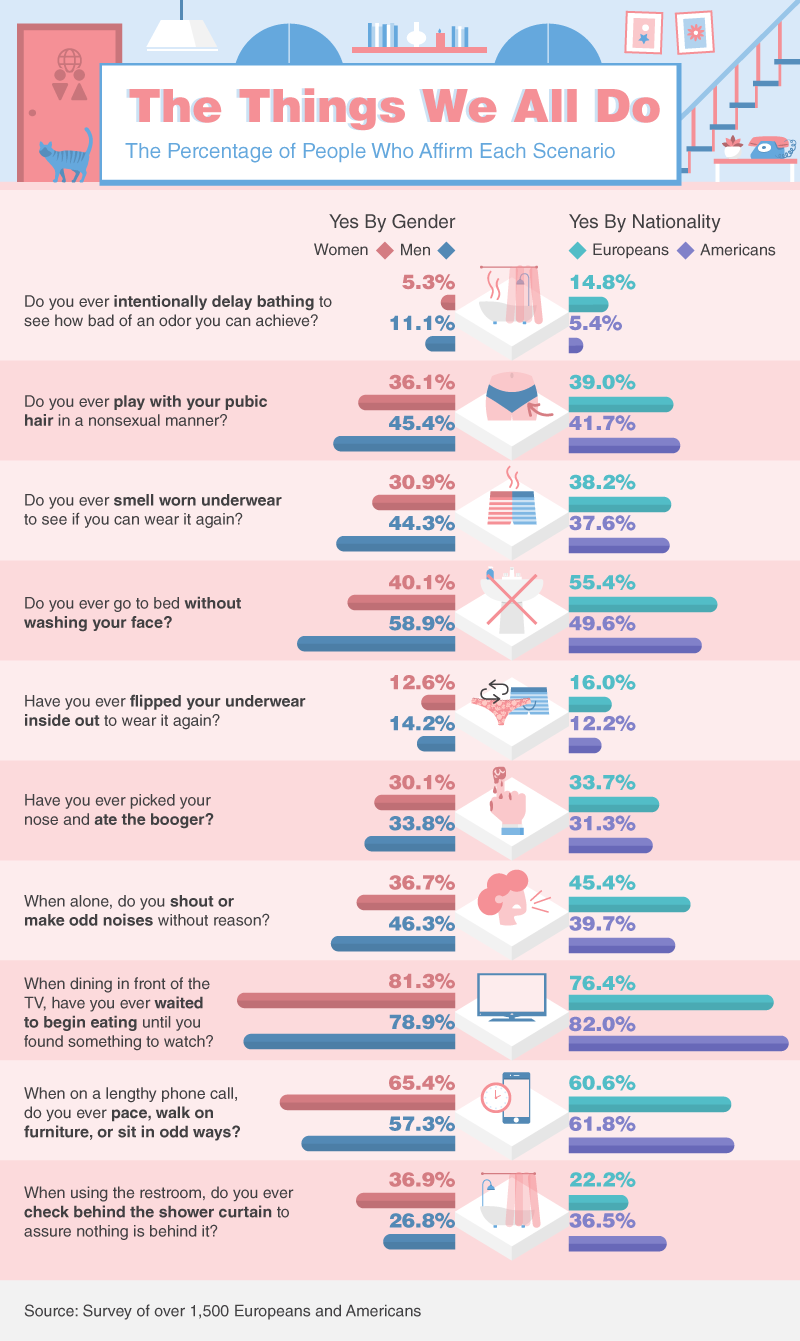 Among European and American men and women, many of the practises asked about happened fairly often. In fact, the significant majority of respondents owned up to habits like refusing to eat before selecting something to watch on TV (over 76 percent of Europeans and 82 percent of Americans) or making peculiar movements while on the phone (around 61 percent of Europeans and Americans). While these actions seem arbitrary, they must possess some broad appeal if so many of us have done them.

Even in the realm of personal hygiene, many of us admit we fall short sometimes. Consider that roughly a third of either gender cops to consuming their boogers, or that nearly 31 percent of women and over 44 percent of men have sniffed used underwear to see if it’s too smelly to wear once more. If you encounter this situation on laundry day, know that you haven’t failed some crucial test of adult competence. Plenty of other folks have found themselves in a similar spot.

While we saw relatively similar results among European and American respondents, men and women diverged on a few interesting counts. For instance, 10 percent more men told us they make noises or shout when alone at home, and guys were significantly more willing to skip washing their faces before getting in bed.

While some of our private habits stem from necessity or convenience (we’d all like to have clean undies available always), we do others because they’re inexplicably satisfying. We asked our survey respondents about acts they did to derive pleasure, then segmented their answers by gender.

While few confessed a fascination with farting, our data showed most people enjoyed letting one rip in the right context. More than 9 in 10 individuals from either gender relished the odour of their own farts, while even more took pleasure in releasing a fart once safely away from others. Women were more likely than men to enjoy both experiences, a fact that might surprise us more than it would ancient cultures. The world’s oldest known joke, dating back to 1900 B.C., describes a lady letting one loose.

Boogers and pimples were also sources of enjoyment for both genders. While nose-picking has long been an established trend (a 1995 clinical study of “rhinotillexomania” established 91 percent of Americans do it), our digital age may have granted pimples and blackheads a new celebrity. If the rise of pimple-popping videos on Instagram and elsewhere have encouraged your acne-related activities at home, millions of views suggest you’re not alone.

The Habits of Women: Weird or Widespread?

We wanted to explore women’s habits specifically because evidence suggests our cultural expectations of female self-care vastly exceed what we demand from men. Consider our study that found the average woman’s beauty routine now extends to 27 distinct steps – an onerous task by any measure. Factor in the reproductive health regimens many women must maintain on a regular basis, and there’s simply no question their burden surpasses that of their male counterparts. With this in mind, we analysed answers from our female respondents about their private actions to shed some light on their quirkier preferences and pleasures. 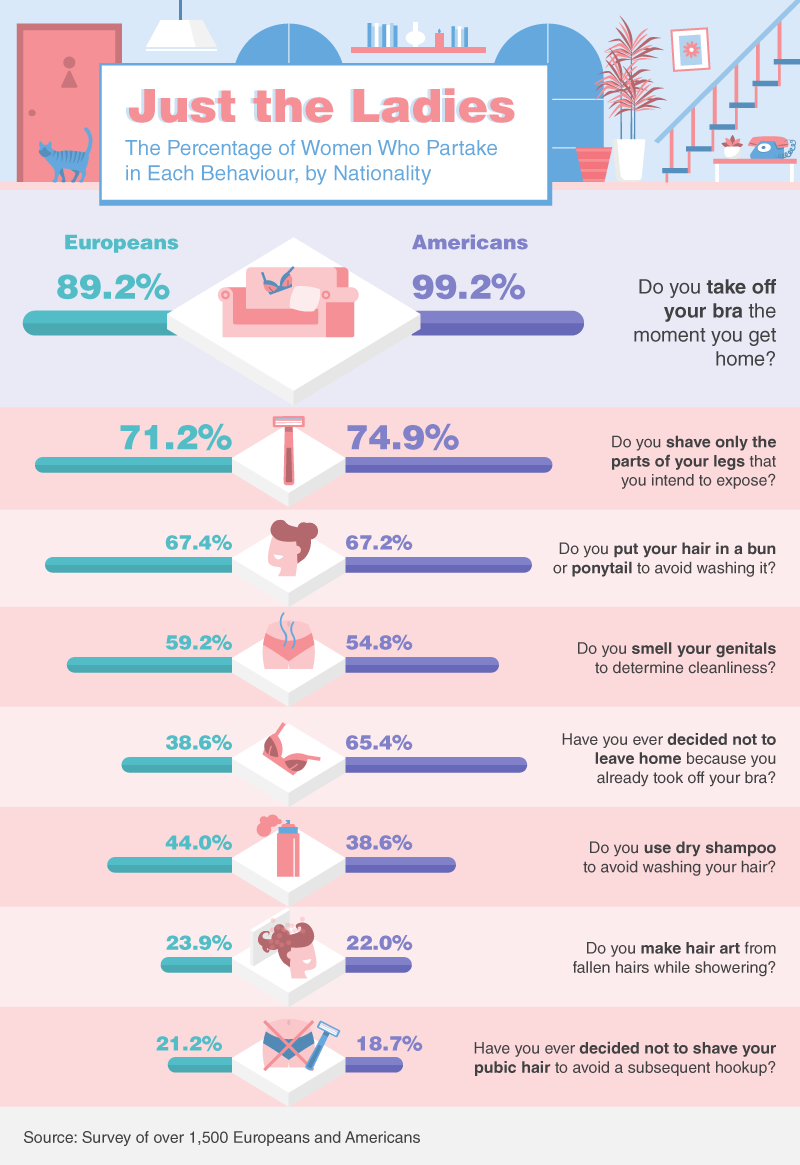 These results are the first instance of marked differences between European and American respondents, which produce some interesting contrasts. Virtually all American women surveyed examined their used tampons, played with their breasts, took off their bras immediately upon getting home, and lingered in a towel long after getting out of the shower. But while a majority of European women said the same, their response rates were far lower in every case.

While some of these trans-Atlantic differences are difficult to explain, there may be a good reason Americans are more likely to shed their bras at the earliest opportunity. Some fashionistas have observed that European undergarments tend to emphasise comfort more than equivalent items in the U.S.

In the realm of self-care, there was more consensus among women on both continents about the beauty shortcuts they sometimes took. More than two-thirds of women used a ponytail or bun to obscure dirty hair, while roughly 3 in 4 shaved their legs only in visible areas. More than half of European and American women also described smelling their private areas to assess cleanliness. While the medical community stresses that vaginal odours are perfectly common, some may be cause for concern because they could be symptomatic of an infection. Viewed in this light, the occasional self-smell may be a prudent practice.

Time for a Change?

In analysing our results, we also dialed in on two particular questions that are the subject of much debate: How long are women leaving in their tampons, and how long do they go before washing their bras?

Recent research finds many women wear their bras for extended periods without washing them, and experts suggest the appropriate time frame for washing them hinges on an individual’s activity and propensity to sweat. Regarding tampon timing, some maintain it’s a matter of personal preference, while medical professionals warn that leaving one in too long could result in toxic shock syndrome (TSS); a potentially fatal condition. So we asked our female respondents about their habits in both respects to see where the majority stands. 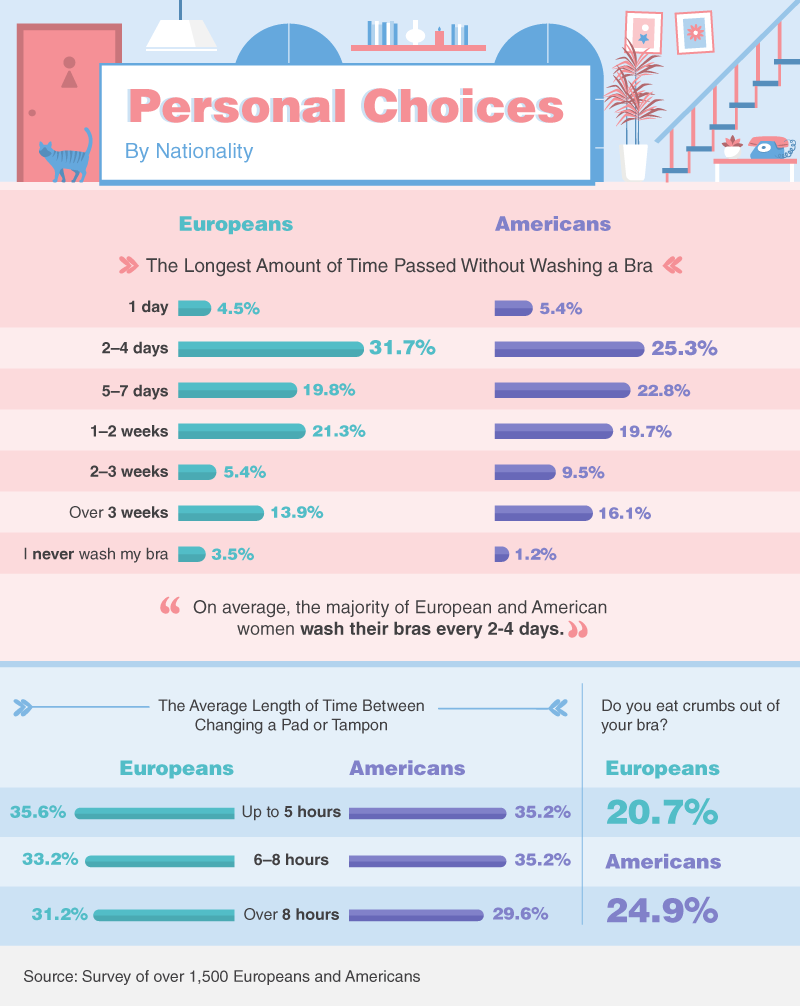 Both European and American respondents were most likely to wash their bras every two to four days, though a significant number waited slightly longer. Less than 12 percent claimed to wash them daily, which implies most women view bras differently than underwear, which they’d presumably wash after wearing once. Our results did reveal a bra-related upside, however: the ability to catch crumbs. More than 1 in 5 European and American women ate fallen morsels in that manner.

When we asked women about their longest continued use of one tampon, our results were evenly distributed among our three time ranges. While the medical community recommends changing tampons at least every 8 hours to prevent risk of TSS, nearly a third of women on both continents passed that mark on average.

Though TSS is rare (only about 40 people contract TSS annually in the UK), replacing your tampon more frequently is the safer choice.

Guys Get Weird As Well

In addition to our exploration of women’s habits, we also studied the way men got quirky when alone. When it came to masculine patterns of private behaviour, guys seemed to do things differently on each side of the Atlantic. 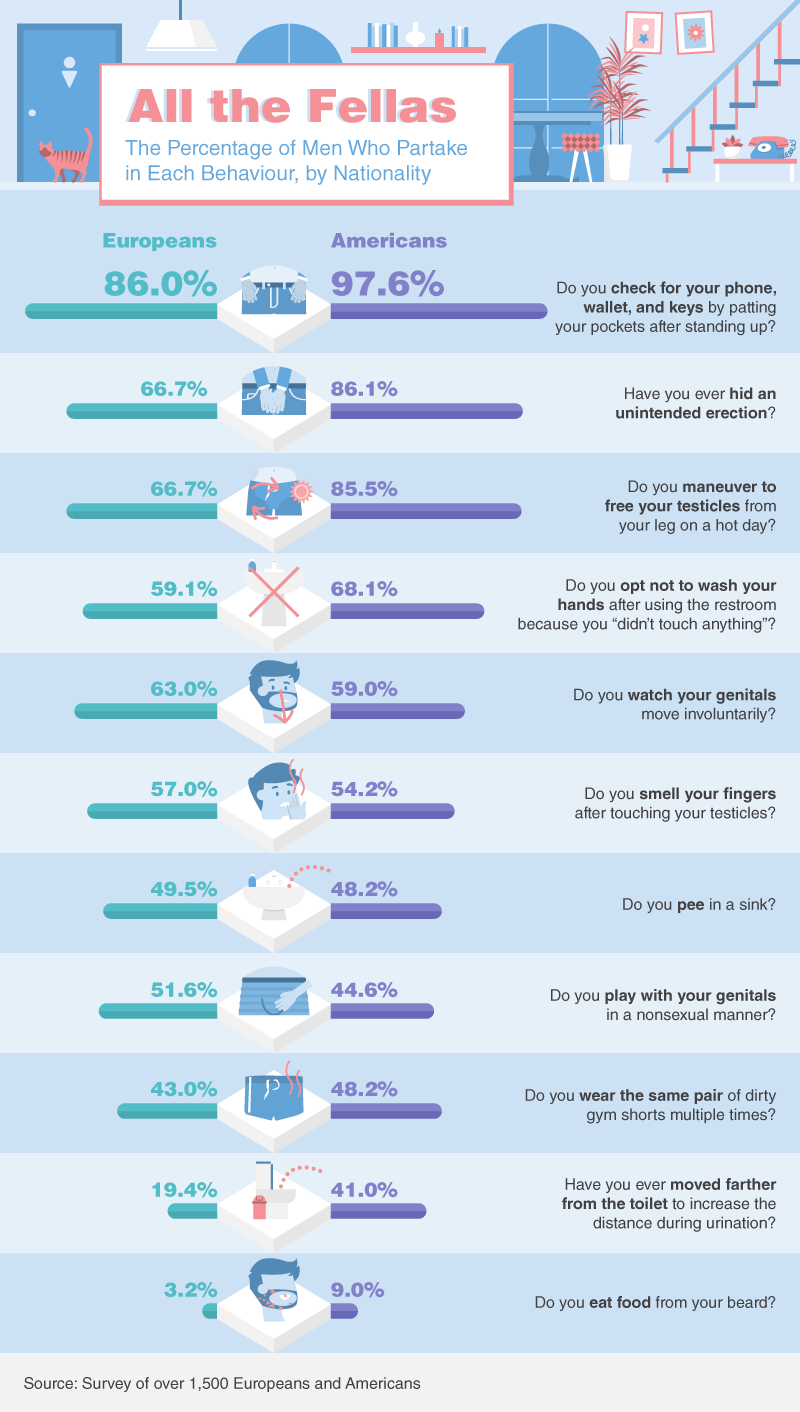 Relative to Europeans, American men seemed to suffer from a greater degree of genital discomfort. U.S. men were far more likely to hide an erection or adjust their private areas to avoid a sticky testicular arrangement. European men were more likely to move their junk around for recreational purposes, however, with more than half owning up to nonsexual play with their genitals.

While a significant majority of both groups admitted to skipping hand-washing after using the toilet, American men were again more likely to do so. A 2012 experiment found more than a quarter of Londoners had fecal matter on their hands, so Brits may celebrate that they’re no worse than their American friends concerning hand-washing diligence. This fact may relate to another finding: Almost half of men also confessed to peeing in a sink at least once. No wonder they’re inconsistent in using sinks for their intended purpose.

Whether you slack on your laundry sometimes or make strange sounds when home alone, we hope our results show you’re in good company. These habits are familiar to many of us, rather than uniquely weird vices no one else accepts. So next time you find yourself acting on one of these quirks or falling short in some way you’d rather not share publicly, give yourself a break. The odds are someone you know probably has done the same – they’re just equally shy about sharing it.

When it comes to your health, however, you don’t need to worry about feeling shy about getting treatment. Superdrug Online Doctor can help you take charge of your care, confidently and confidentially. Through our entirely virtual platform, we make it easy and affordable for you to access medications and services for vaginal infections, hair loss, erection problems, contraception and even acne. With our free delivery, You won’t have to worry about keeping your quirks in check at the doctor’s office. Visit us online today.

We surveyed over 1,500 Europeans and Americans about the unusual things they do. We then indexed their responses against self-reported demographic information to create the comparisons presented above.

Interested in sharing the unusual things people do? Great! Feel free to do so for any noncommercial purposes; just be sure to link back to this page and its authors. If you have any questions, please contact [email protected].