Looking for a sign that you might have met the one? Chemistry quizzes and horoscope compatibility charts may offer a small glimpse into what it takes to go the distance romantically, but it takes much more than that to make a real relationship last.

Despite the suggestion that it takes less than 12 minutes after meeting someone to decide if there’s a connection, relationship experts believe real compatibility is built on more substantial elements of trust, accountability, and support in addition to physical intimacy. While some of these aspects may come more quickly in a new relationship, others (like feeling comfortable and confident in each other) can take time to establish.

To learn more about what men and women really look for in a significant other, we polled over 1,100 Europeans and Americans on their ideal partner – from their physical requirements (including height and weight) to personality traits and age. Want to know whether most people desire a more physical or emotional connection and if they’re willing to settle for something else? You don’t need to swipe right or left to find out; keep scrolling to see what we uncovered. 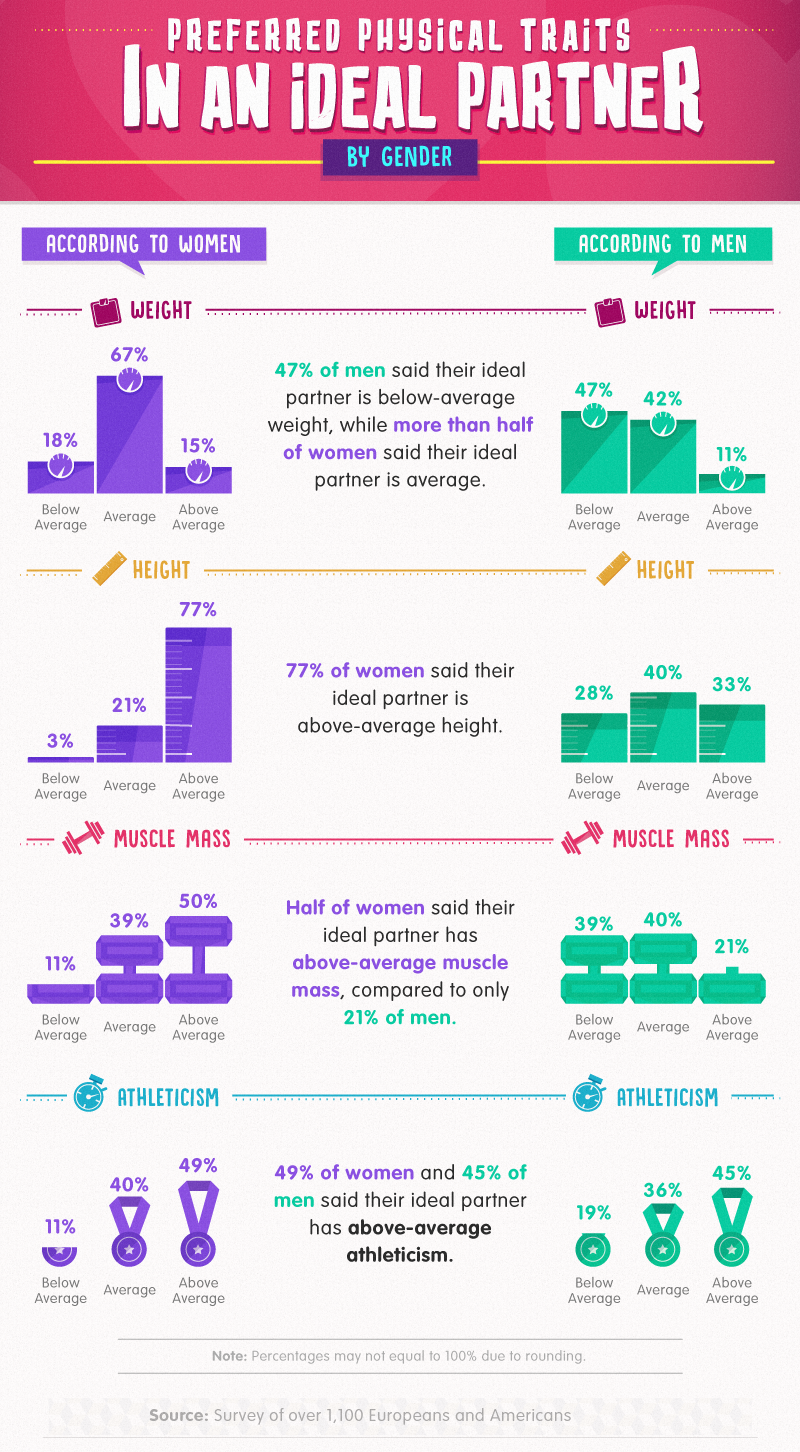 As dating apps rise in popularity, a fear of commitment may be growing alongside them. If you regularly catch yourself idealising the relationships of people around you or fantasising about fictional couples, among other things, your demands of the ideal partner could be too strict. While our expectations are sometimes too harsh, a fear of commitment can also be a mask for the fear of failure or rejection. Still, experts suggest if you aren’t actively engaged with trying to find that special someone in spite of these fears, you could miss out on something truly great.

When it comes to weight, height, muscle mass, and athleticism, men and women around the world had different notions about their ideal romantic companion. While more than half of women preferred a partner with an average weight, nearly half of men idealised a partner with below-average body weight. Despite this, over half of men still preferred women with average or above average weights. The picturesque female form seen in media adverts has changed over time and continues to impact how both men and women react to their bodies. Still, body positivity is on the rise and being championed by everyone from social influencers to government sponsored programs to help women challenge these unrealistic body standards.

Women might have more realistic expectations about weight, but more than 3 in 4 European and American women preferred a partner who was above-average height. In contrast, the ideal height for 40 percent of men was average and below average for more than 1 in 4. Despite strong trends towards body positivity, some men are still especially self-conscious of their height, particularly where dating and social interaction are concerned.

Half of women also preferred above-average muscle mass, and nearly half of men and women had a preference for above-average athleticism. As with mainstream adverts, a rising trend in fitness-focused social media accounts may be setting unrealistic expectations for men and women over what a “fit” or healthy physique should look like. 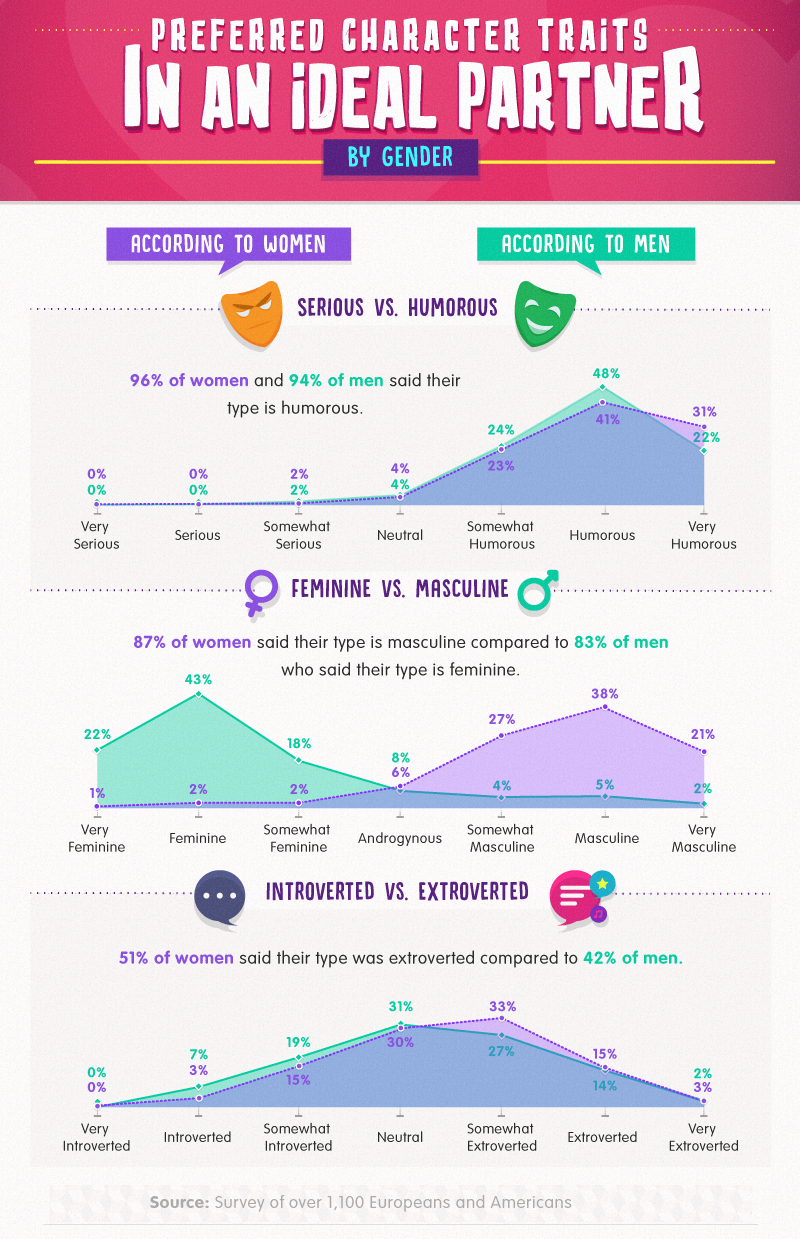 There are plenty of signs to look out for if you need a little reassurance that you and your partner are a good match. Thinking about them often, feeling genuinely excited about their accomplishments, and even spending time apart occasionally are all subtle clues things might be going better than you think. And, of course, having a shared sense of humour never hurt either.

Laughing on the same wavelength can help create a private language in a romantic relationship, the kind of lingo that helps deepen an emotional bond and increase relationship satisfaction. Seventy percent of men and 72 percent of women indicated the ideal partner was either humorous or very humorous. In contrast, none of the more than 1,100 people polled suggested a serious or very serious partner would measure up to their dream date.

While younger people across the U.K. are less likely to identify as completely masculine or feminine, some still want these traits in a partner. Forty-three percent of men confessed their ideal partner should exhibit feminine traits compared to 38 percent of women looking for masculine behaviours. More than 1 in 5 men and women desired either very feminine or very masculine traits in their perfect companion. Despite these expectations, gender identity is experienced on a sliding scale for many people who can fluctuate from feeling specifically feminine or masculine (or somewhere in between) from day to day.

Men and women only slightly differed on how outgoing they’d like the ideal partner to be. Men were marginally more inclined towards a partner with an introverted personality, while women preferred more extroverted traits. 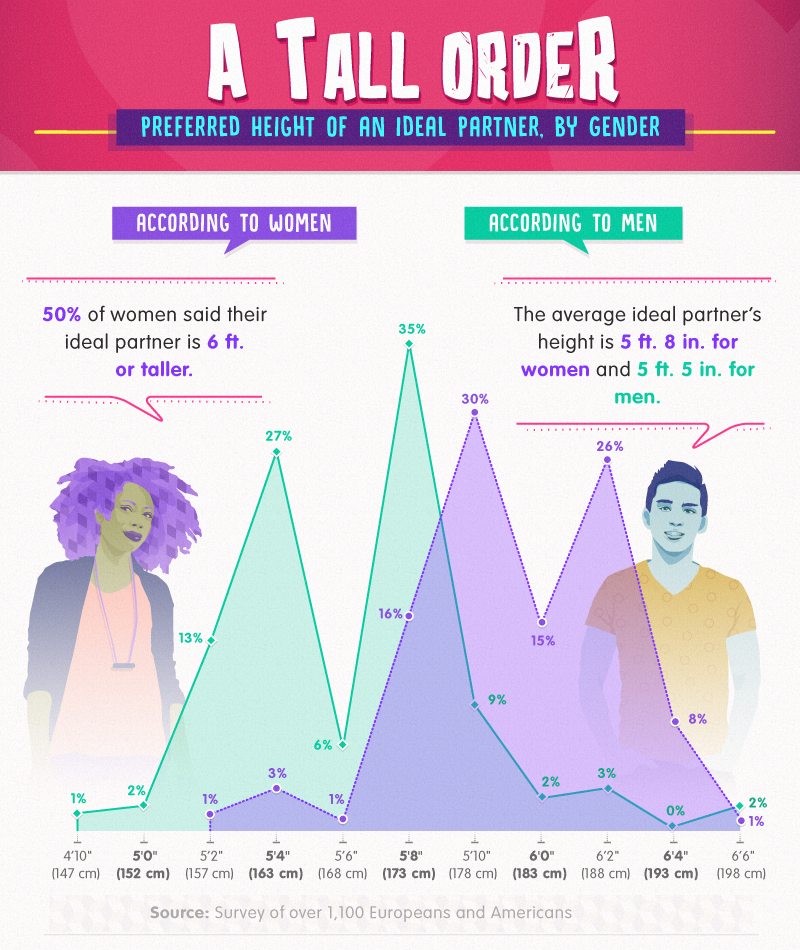 Tall, dark, and handsome. Dark and handsome might be slightly more ambiguous, but tall has a number. Of European and American women polled, half acknowledged their ideal partner is 6 feet or taller. On average, women went on to define the perfect height as 5-foot 8 inches tall compared to 5-foot 5 inches for men. While old myths suggests a woman shouldn’t be taller than a man among heterosexual couples, those stigmas are changing. Today, height rarely makes or breaks a relationship according to some experts.

Body positivity concerns aren’t an exclusively female issue, and men may face a certain level of discrimination if they don’t measure up physically to those around them. Studies have shown nearly 60 percent of Fortune 500 CEOs are 6 feet or taller, and shorter men tend to earn less than their towering counterparts. It’s even become somewhat acceptable to ask about a person’s height before meeting them in person and equally expected that they might embellish the answer.

More Than Just a Number 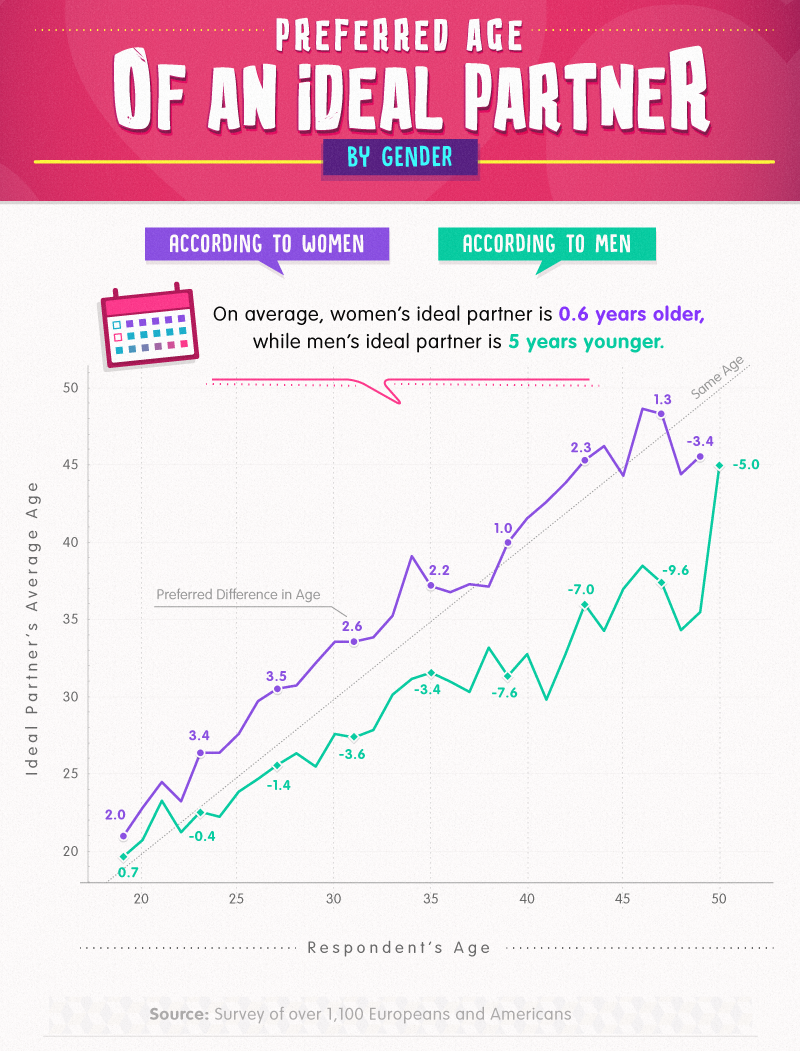 Some of the most famous Hollywood couples feature rich and famous men with boyfriends, girlfriends, and wives much younger than them. But just how much younger is the ideal companion, and why is it so common?

Our analysis revealed men’s perfect companion is five years younger on average. While men in their 20s and early 30s preferred a roughly younger partner, 42-year-old men said their ideal partner was more than 11 years younger than themselves. When it comes to age discrimination, older women often bear the brunt of these unfair expectations in both romance and the workplace. Experts suggest this preference for a youthful counterpart may be partly owed to favouring a certain physical look. Others say this may indicate a lack of confidence in men who see or use their partners as a symbol of power.

And where do women stand in the great age debate? They tend to prefer a partner who’s slightly older than them – but not by very much. Less than a year, on average. Only women in their 20s and 30s indicated a partner more than three years older than them conformed to their vision.

Fashion Do or Dating Don’t? 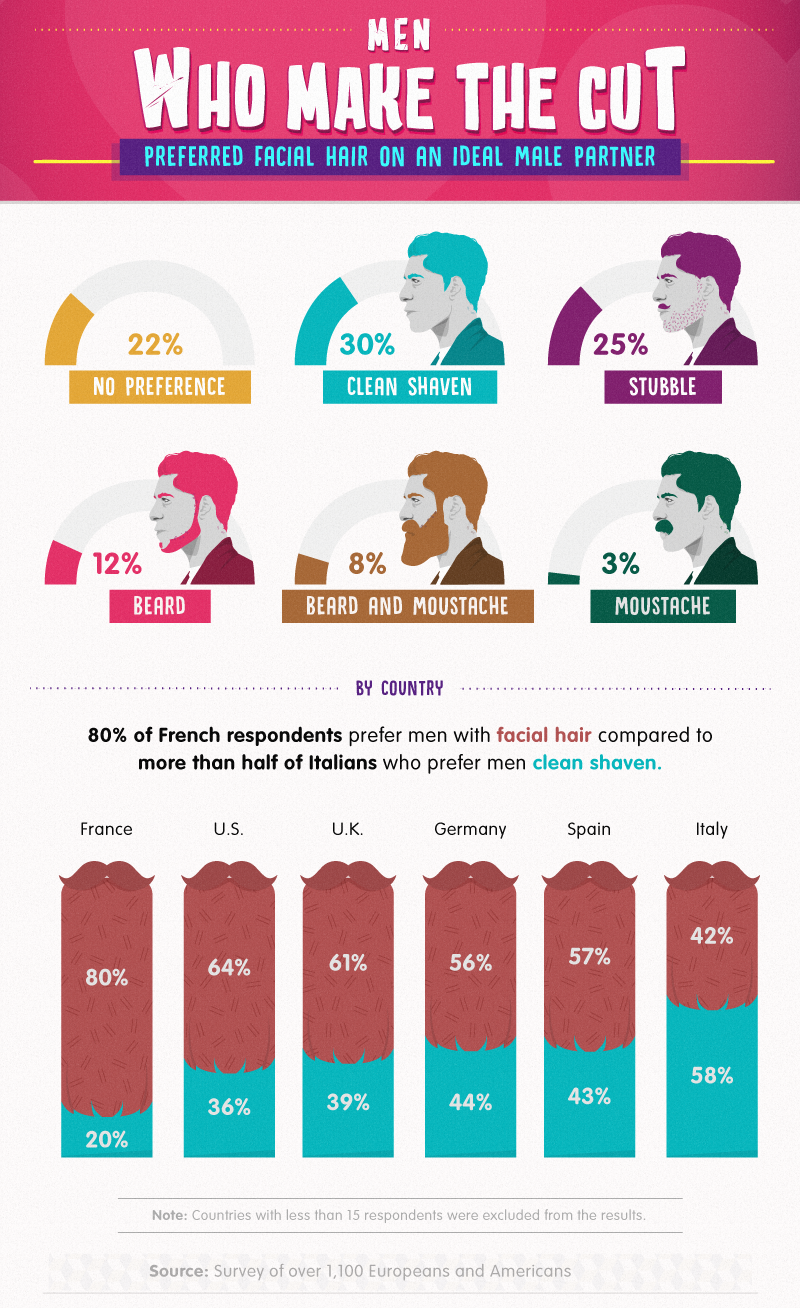 Facial hair is a fashion accessory that goes in and out of favour over time. In 2016, nearly 1 in 5 men across the U.K. had a beard and moustache, 17 percent had stubble, and another 5 percent had either a beard or moustache. For further evidence that significant stubble is currently trendy, look no further than London Fashion Week Men’s in 2017, where full-on facial hair was totally en vogue. Still, just because whiskers and bristles are popular now doesn’t mean they’re considered desirable in a romantic partner.

Thirty percent of Europeans and Americans confessed the ideal man was clean-shaven. Another 1 in 4 said they preferred just stubble, and only 12 perfect preferred dating a man with a beard. While more than 1 in 5 had no preference on the matter, 8 percent of respondents considered a man with both a beard and moustache ideal.

Trying to decide if you should shave it all off to increase your luck in the dating arena? That answer may depend on where in the world you currently live. Eighty percent of French respondents preferred men with facial hair, followed by more than 60 percent of people from the U.S. and U.K. More than half of Italian participants preferred men who were clean-shaven instead. 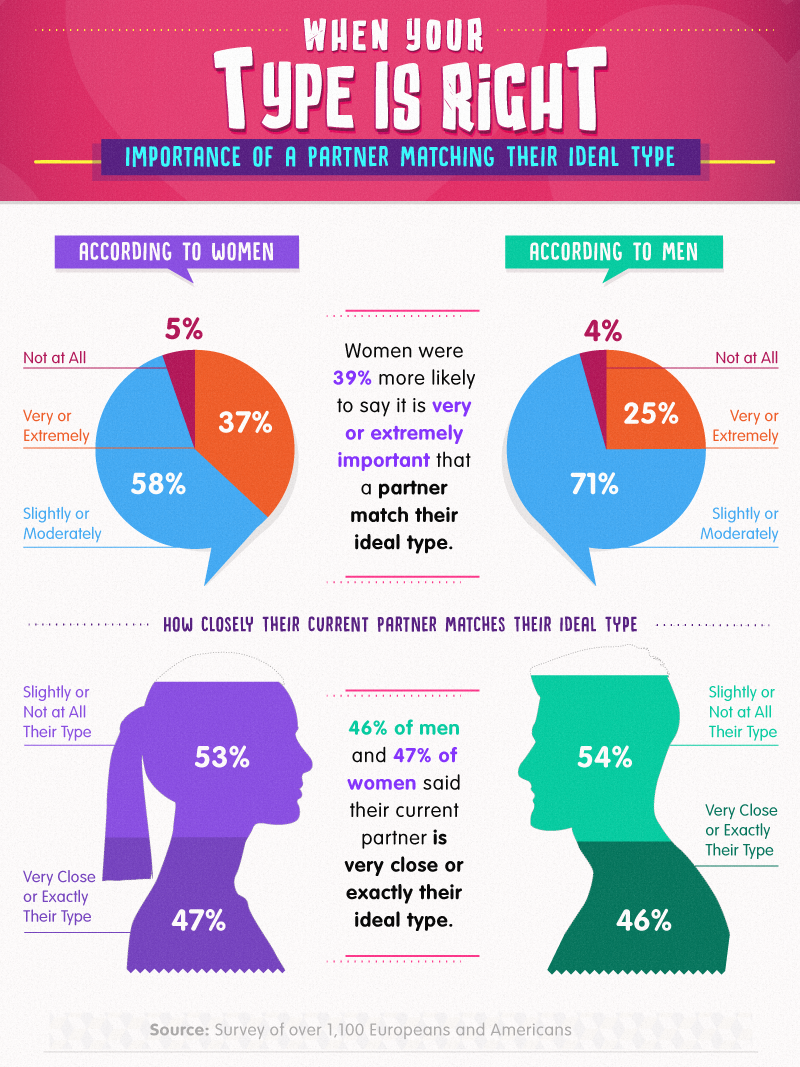 Knowing your type is one thing, but how many men and women aren’t willing to budge when settling for someone outside their ideal parameters? Men might be more likely to admit having certain unrealistic expectations (including idealising a below-average weight), but finding the ideal match was more important to women overall. Nearly 40 percent of women said it was very or extremely important that their partner line up with their ideal type compared to just 1 in 4 men.

Still, 46 percent of men and 47 percent women said their current partner was very close or exactly their type. So is it better to temper expectations? That may depend on the traits that matter most. Physical intimacy is important, but your emotional connection and compatibility might be even more essential.

How Do You Stack Up? 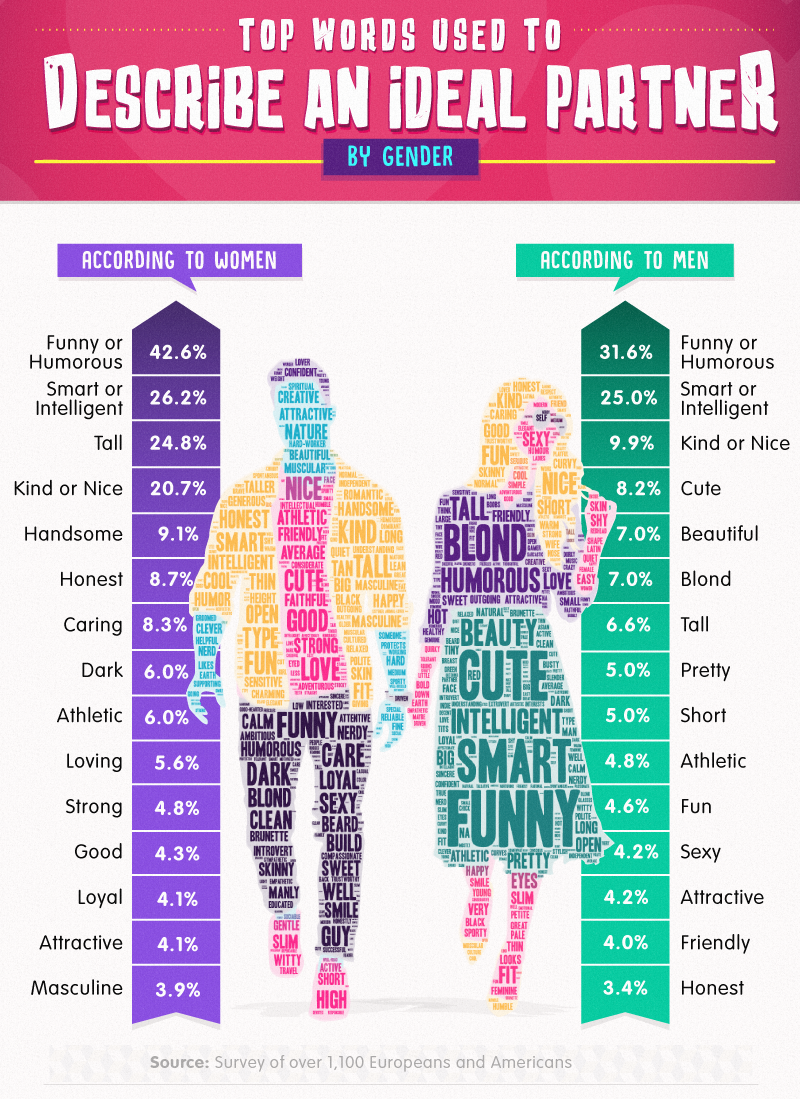 Finding someone who can make you laugh isn’t just good advice for determining compatibility – it was the most commonly identified marker of an ideal partner. Slightly more important to women (nearly 43 percent) than men (almost 32 percent), a healthy sense of humour can go a long way in a relationship.

Further, roughly 1 in 4 people agreed finding someone they considered smart or intelligent as crucial. For women, finding someone tall (about 25 percent), kind (14 percent), and handsome (just over 9 percent) was important, while men preferred dating someone cute (over 8 percent), blond, and beautiful (7 percent each).

You probably don’t need a dating app questionnaire or compatibility checker to help you figure out what you want in a partner, but it might be helpful to differentiate between meaningful requirements and unrealistic idealisations. Our survey found men were more likely to consider physical attributes (including a below-average weight) necessary, while women were less likely to compromise on their type (including above-average height) overall. Both men and women recognised emotional compatibility (including humour and intellect) as the most important trait in an ideal partner.

Connecting intimately with a partner can be just as important as connecting emotionally, so why let your sexual health get in the way of finding the person of your dreams? At Superdrug Online Doctor, we help take the hassle out of seeing a doctor for common concerns. Our completely confidential service provides everything you need to feel confident and sexy when the time comes. Our registered doctors help you get the correct medication, and everything you need is delivered right to your doorstep. Take the fear and embarrassment out of caring for your sexual health with Superdrug Online Doctor.

It is possible that with more participants, we could have gained more insight into American and European respondents. The data we are presenting rely on self-reporting. No statistical testing was performed, so the claims listed above are based on means alone. As such, this content is exploratory.

Feeling the connection? If you think this story could be your type, feel free to share the results of our research with your audience for any noncommercial use. Just make sure to link back to this page so they can see our findings in their entirety. Questions or concerns? Please email any comments to [email protected].