Nudity In The Media

From Renaissance art depicting humans in their natural state to nip slips making news headlines, nudity is everywhere. Movies, TV shows, and advertisements capitalise on nudity, yet the same bodies are shamed when shown in a different setting.

We stare in awe at nude art and condemn the accidental exposure of a celebrity, but why? What makes each situation different? And when does nudity make us the most uncomfortable? We asked over 1,000 Europeans and Americans to explore their personal and cultural perceptions of nudity. Curious who’s modest, and who’s unhampered? Continue reading to find out. 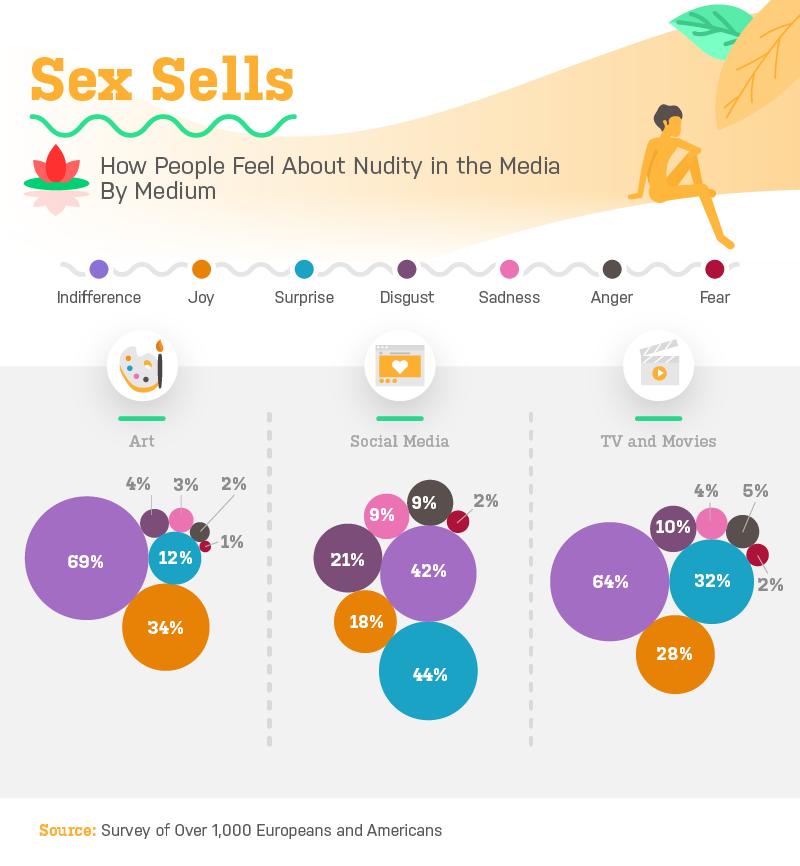 With nudity in movies and TV shows on the rise and social media outlets cracking down on exposure policies, we were interested to see how Europeans and Americans felt about nudity in the public eye.

Indifference, joy, and surprise were top emotions expressed by people across all mediums. In fact, when it came to appreciating art, nudity didn’t evoke much disgust, with only 4 percent reporting this feeling. However, nudity on social media was seen in a more negative light. Although 42 percent of respondents felt indifferent about the exposure, 44 percent were surprised, and 21 percent felt disgusted.

High levels of disgust when it comes to nudity on social media may be due to a lack of preparation. When logging onto Facebook or Twitter, most people expect to see updates from their family and friends or viral videos meant for a laugh – not someone’s naked body.

Turning on the TV, watching a movie, or visiting a museum are very different, though. Nudity has been displayed on the big and small screen for decades and through art even longer, so it’s somewhat more expected, though not always accepted. 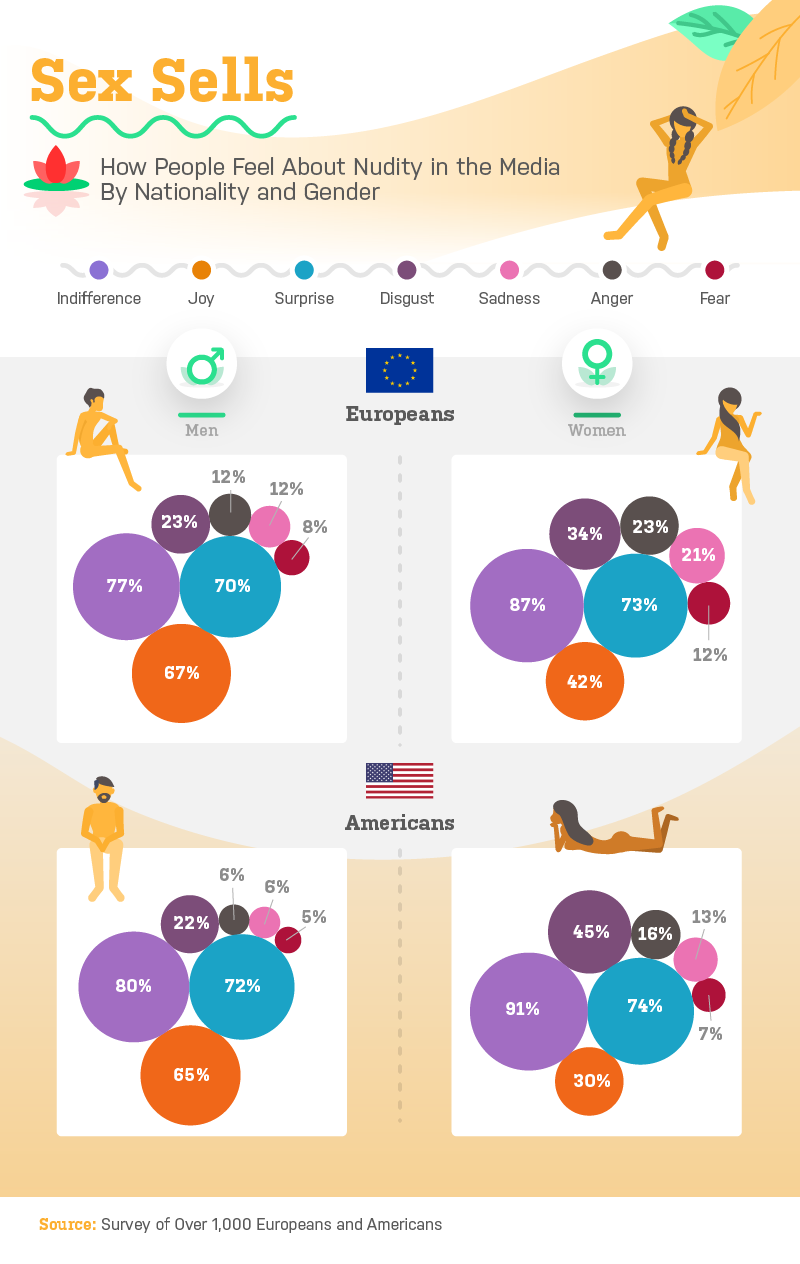 Most Europeans and Americans felt indifferent about nudity in the media. However, we broke down their responses based on gender and nationality and found Europeans felt slightly more joy than Americans when viewing nudity in media.

When looking specifically at gender, women were more disgusted with seeing nudity than men. Add in nationality, and the divide became greater – American women were nearly twice as disgusted with nudity in the media than American men. 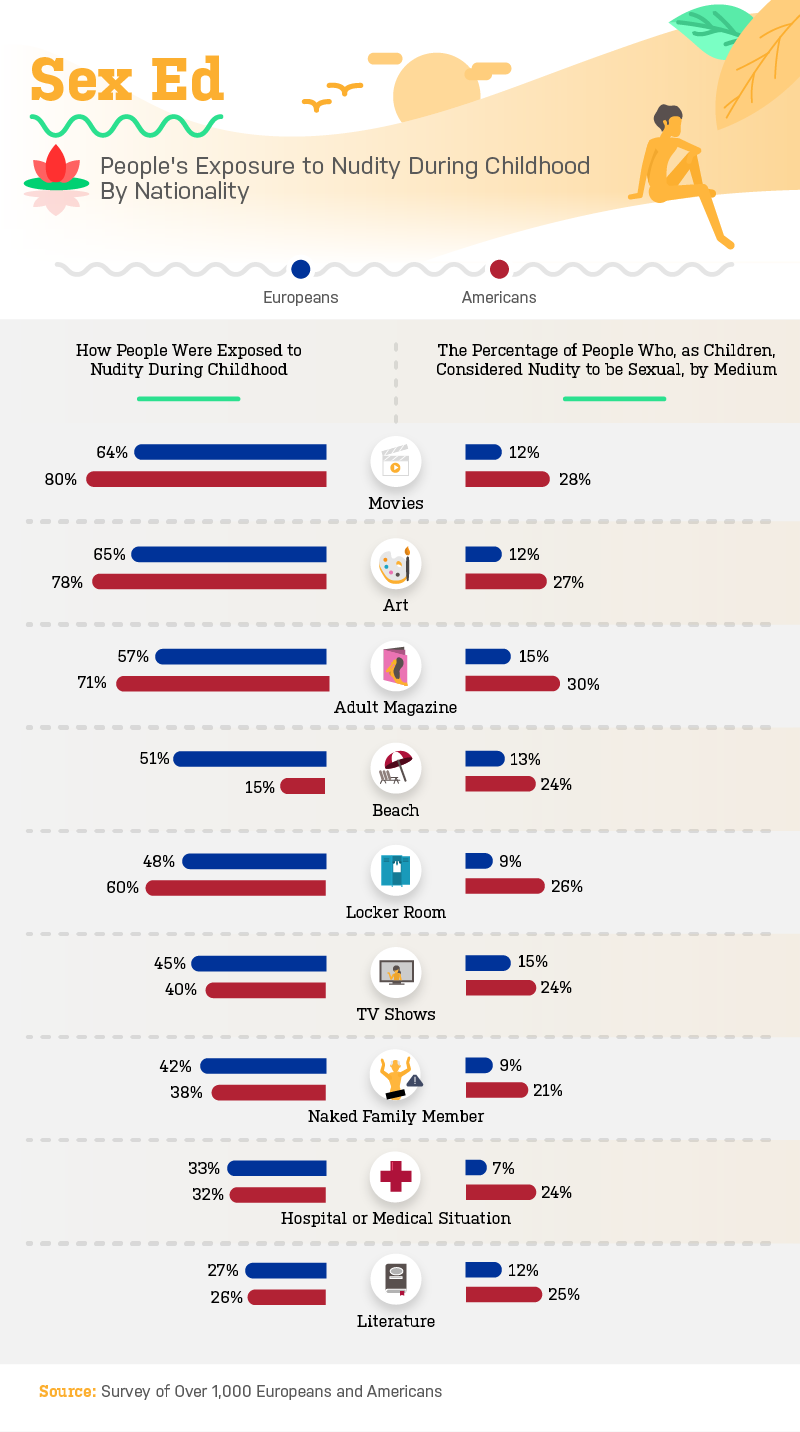 Nearly 20 percent more Americans than Europeans were exposed to nudity via movies during childhood. However, when it came to the beach, it was more commonplace for young Europeans to experience nudity than Americans.

While American children are typically shielded and usually prohibited from designated nude beaches, sunbathing nude on the beach is a cultural norm across many parts of Europe. The increased public exposure to the naked body on the beach and the likeliness of a parental presence in that situation may be the reason Europeans viewed nudity as less sexual than Americans in every scenario we presented.

Of the Americans exposed to adult magazines as children, 30 percent tied nudity to sexuality as they grew up – twice the number of Europeans.

The Age of Acceptability 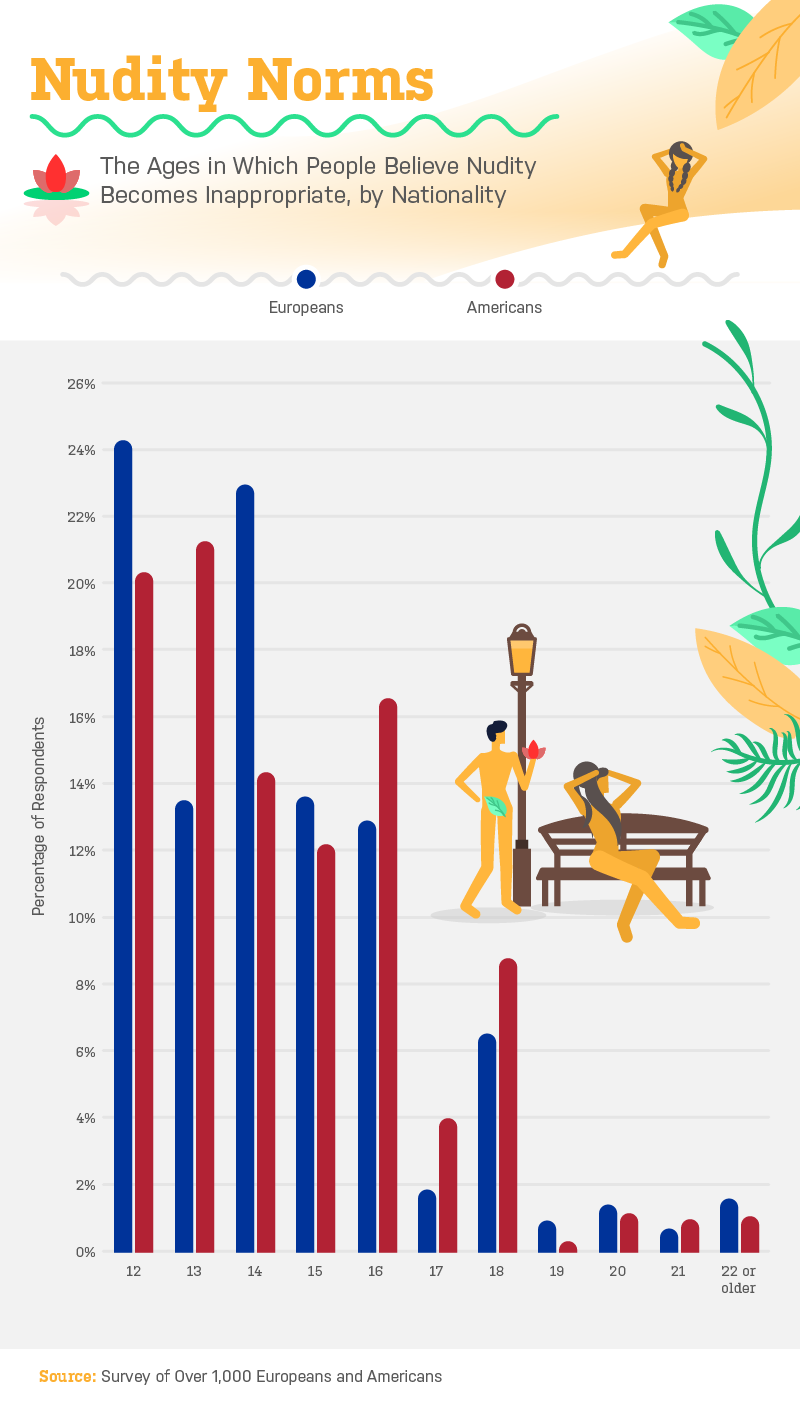 For some reason, children love being naked. It’s normal for toddlers to strip themselves of their clothes and run around sporting nothing but a diaper, but at what age does this become unacceptable?

Both Americans and Europeans agreed that around the ages of 12 to 14 years old, the nude body begins to be viewed as sexual by society. Although this age may seem low, it could be a good marker for parents to start talking to their children about appropriate venues for nudity and being comfortable with their bodies.

A Public Display of Bodies 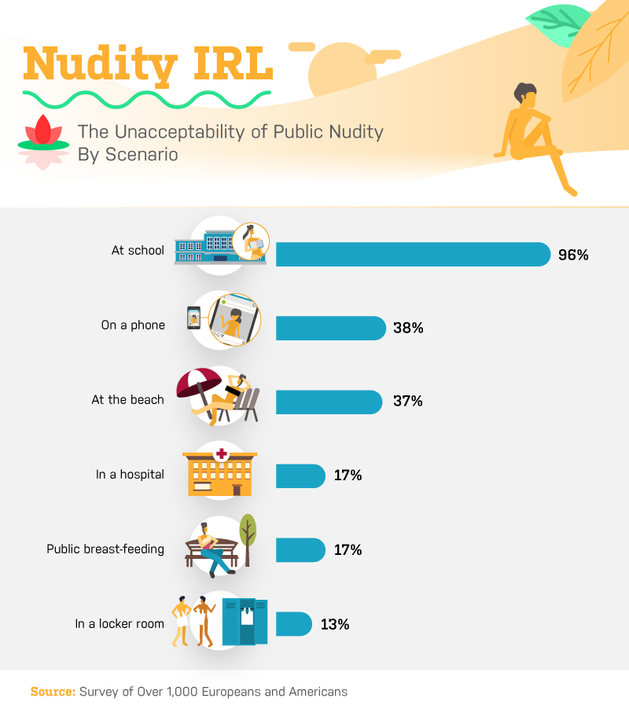 Exposure to nudity in childhood may just be a normal facet of growing up in both Europe and the U.S., as our study finds. Beyond the movies, magazines, and fine arts, European beaches and American locker rooms were some of the most common public spaces in which people were exposed to nudity as kids. That doesn’t mean it’s socially acceptable, however, to let your nudist flag fly in public.

Both Europeans and Americans agreed: Schools were one of the most unacceptable venues to exhibit nudity, according to 96 percent of respondents. Even private cellular devices were no place for privates. Another 38 percent thought viewing nudity on the phone in public was unacceptable.

Beaches were also murky places to sun in the buff, according to 37 percent of participants. It is important to note the U.K. has a very different attitude, societally and legally, towards public nudity than the U.S. Before you become The Naked Rambler 2.0, it may be worthwhile to refresh yourself on the rules of intent behind public nudity and practice good nudist beach etiquette. 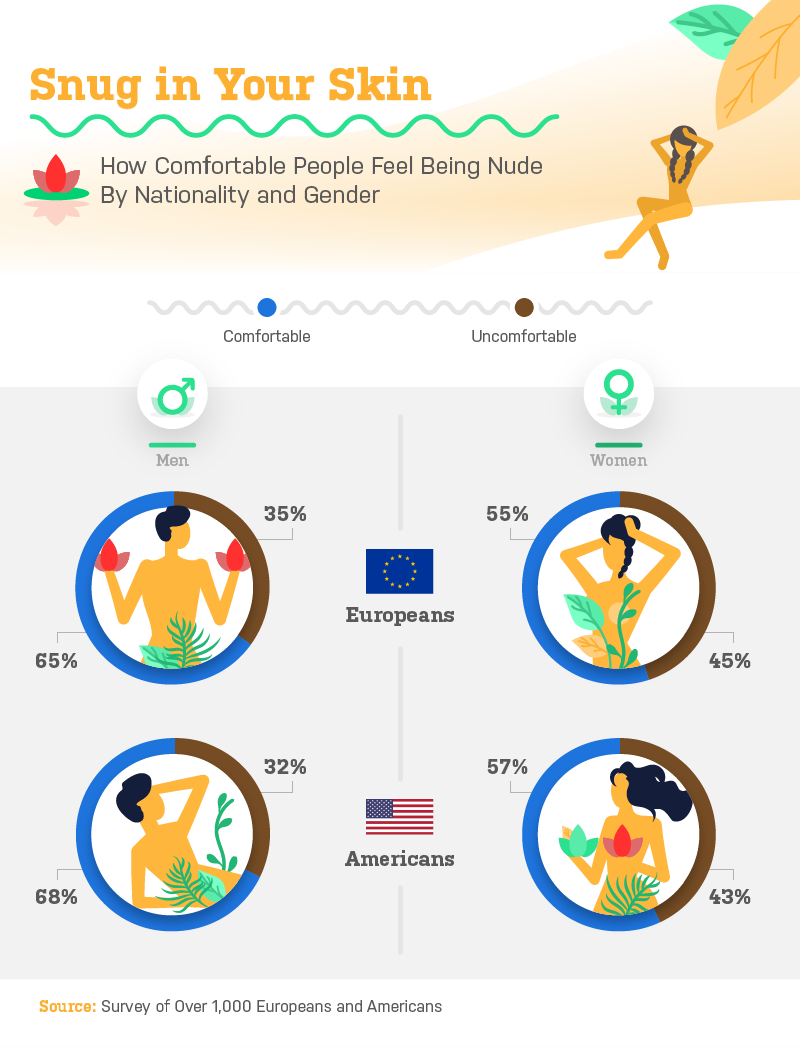 European and American women shared negative feelings towards nudity in the media and a lack of comfort with their own naked bodies. Despite the lax European laws on public nudity and America’s strict laws prohibiting exposure, European women were just slightly more uncomfortable being nude compared to American women.

Exposure, culture, and gender play a role in one’s perceptions of nudity, but how one views his or her own body is also an important factor. 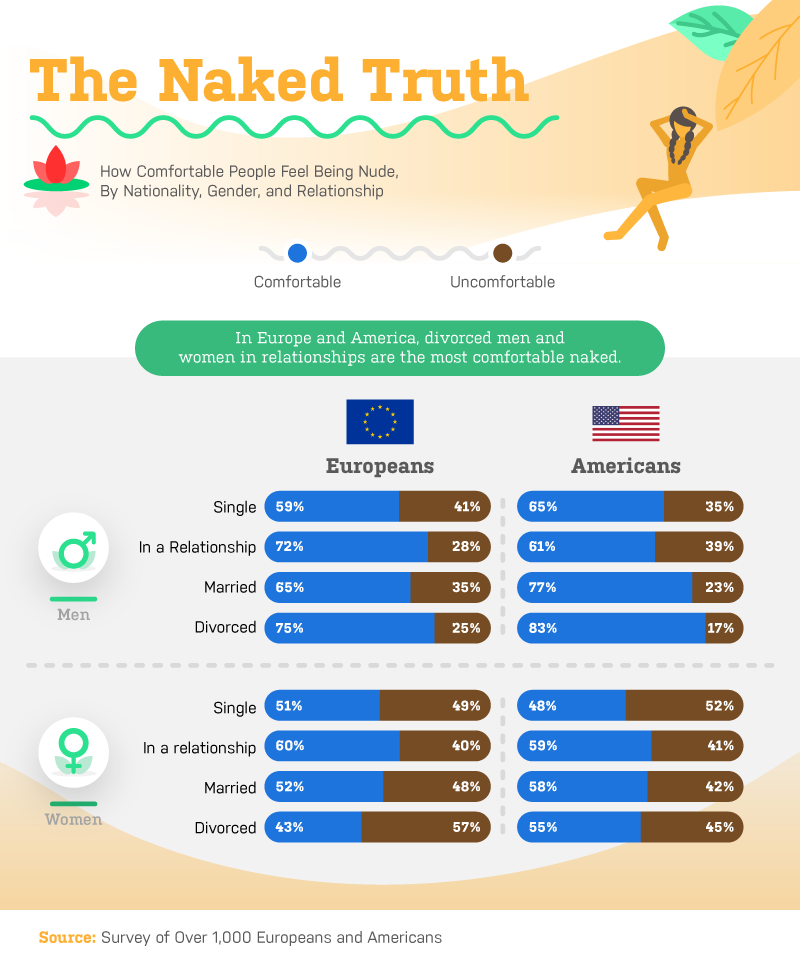 Regardless of age, shape, or size, some men and women can’t shake the vulnerability they feel when their clothes come off. Despite how it might make their partners feel, some women even prefer to avoid being seen naked during intercourse because of the shame or self-consciousness they feel when exposed. 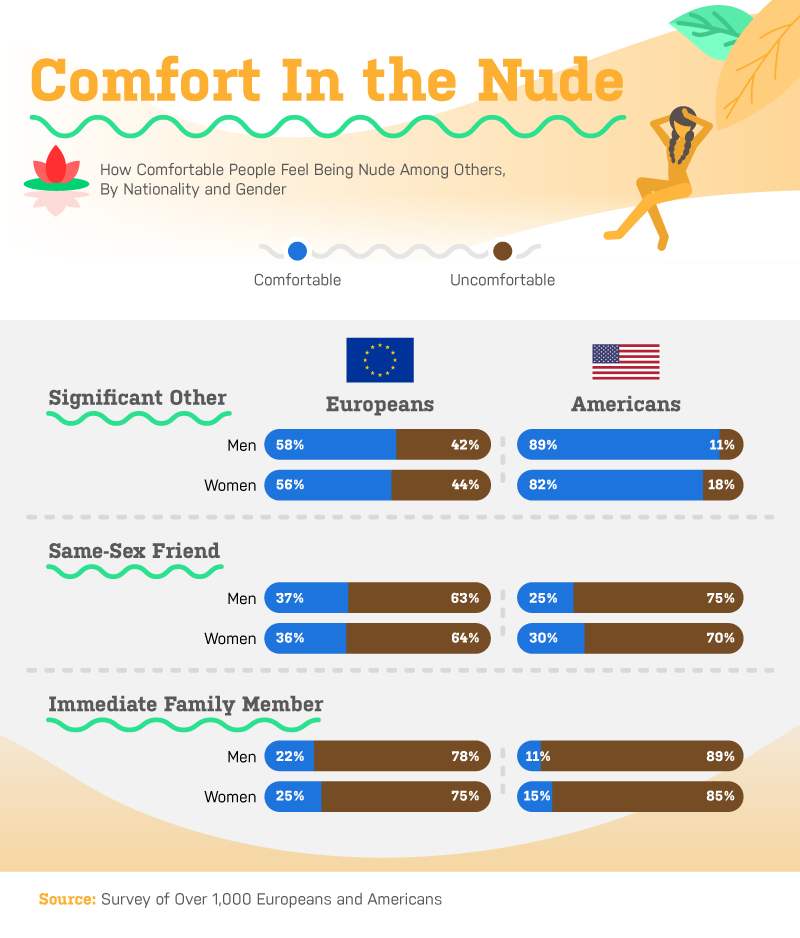 However, Europeans were more likely than Americans to feel comfortable if a same-sex friend or immediate family member saw them in the nude.

It’s not impossible for men or women to be uncomfortable with their body even when around a spouse. Cutting back on social media, paying attention to the compliments your partner gives you, and remembering your body doesn’t define your character or what someone loves about you are important tools in combating these risky perceptions of self-worth.

Growing Into One’s Own Skin 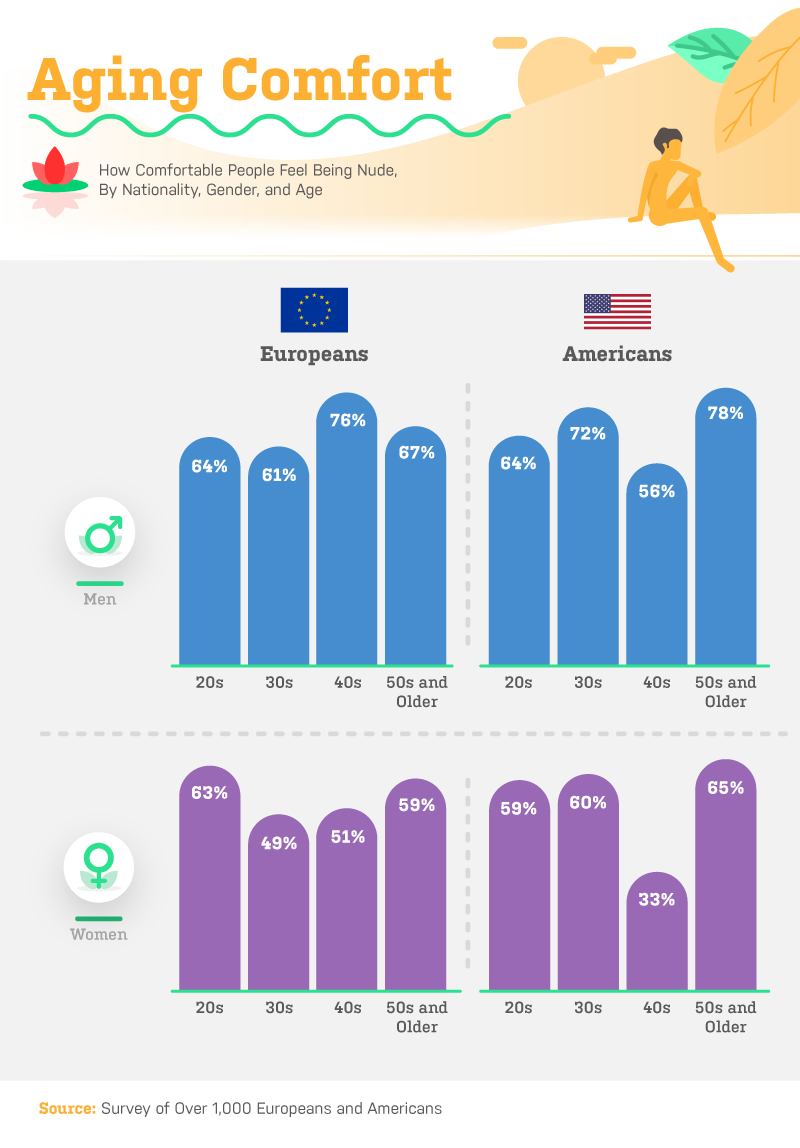 Traditional beauty standards have long held that younger is beautiful – but that trend may be starting to turn. Since 1990, the average age of the “most beautiful people” has risen from 33 to 38 years old. And while this may be the standard portrayed by the media, some men and women don’t become comfortable with their nudity until years later.

Europeans and Americans agreed there was a difference between appreciating the beauty of a nude body in art and seeing a nude body in public or on the screen. While women tended to be more conservative and uncomfortable with nudity, men were more likely to embrace their birthday suit and find joy when others shared the sentiment.

Being nude may not be everyone’s cup of tea, but staying sexually healthy should be. Knowing your body and making healthful choices is an important part of feeling comfortable in your own skin, and Superdrug Online Doctor can put your mind at ease. You can get access to online doctor services and even get medication shipped directly to your door. You don’t even have to get dressed to do it.

We surveyed over 1,000 Europeans and Americans on their perceptions of nudity. We asked respondents how they were exposed to nudity through media and in real life, as well as their own comfort with being in the nude and the acceptability of being nude. We then asked basic demographic questions.

Feel free to strip down and share our findings with friends and followers for noncommercial purposes only. Just don’t forget to link back to us to give credit where it’s due! For any questions regarding this project, please email us at [email protected].