Hypersexuality and unrealistic beauty image standards in advertising, and even in social media, are commonplace.

While women (and men) across the country – and even the world – have acknowledged the physical insecurities they feel from the oversaturation of these images, consumers are starting to fight back on the virtually unattainable body standards being perpetuated by the media today.

To provide an opportunity for them to empower themselves, we asked female artists from countries all around the world to reimagine some of the most sexually explicit ads in recent memory in an empowering way. From their culture to their heritage, these are the images they created to show what beauty really means to them.

Statistics convey that most women aren’t completely happy with their bodies. While they may not consider themselves completely unhappy either; one study of 5,000 women in the U.K. reported that only 3 percent were totally happy with their bodies. While advertisements that put women in sexually compromising positions are nothing new, perhaps this dissatisfaction is a reason why experts suggest sex doesn’t sell anymore.

While artists from countries like Russia and Mexico lightened her skin tone, more than half showcased the model wearing more clothes than she was originally photographed in. The majority also changed the sexually provocative pose used in the original ad in their effort to represent her as more empowered. In the Ukraine, while the artist may have kept the original body positioning, their version of the model openly displays body hair and a more secure facial expression that probably meant to contrast with the original look of discomfort (oh, and she’s also wearing leggings). As the artist told us, “There’s nothing wrong with sex,” and we all determine what sexy looks like for ourselves.

Artists from four countries – Venezuela, Greece, Brazil, and the Philippines – accentuated the model’s newly found empowerment with words, identifying her as having strength, pride, and dignity. Our artist from the Philippines chose to draw her with more colours and hues evoking a higher energy and vibrant aesthetic compared to the passive, minimalist portrayal of the original. 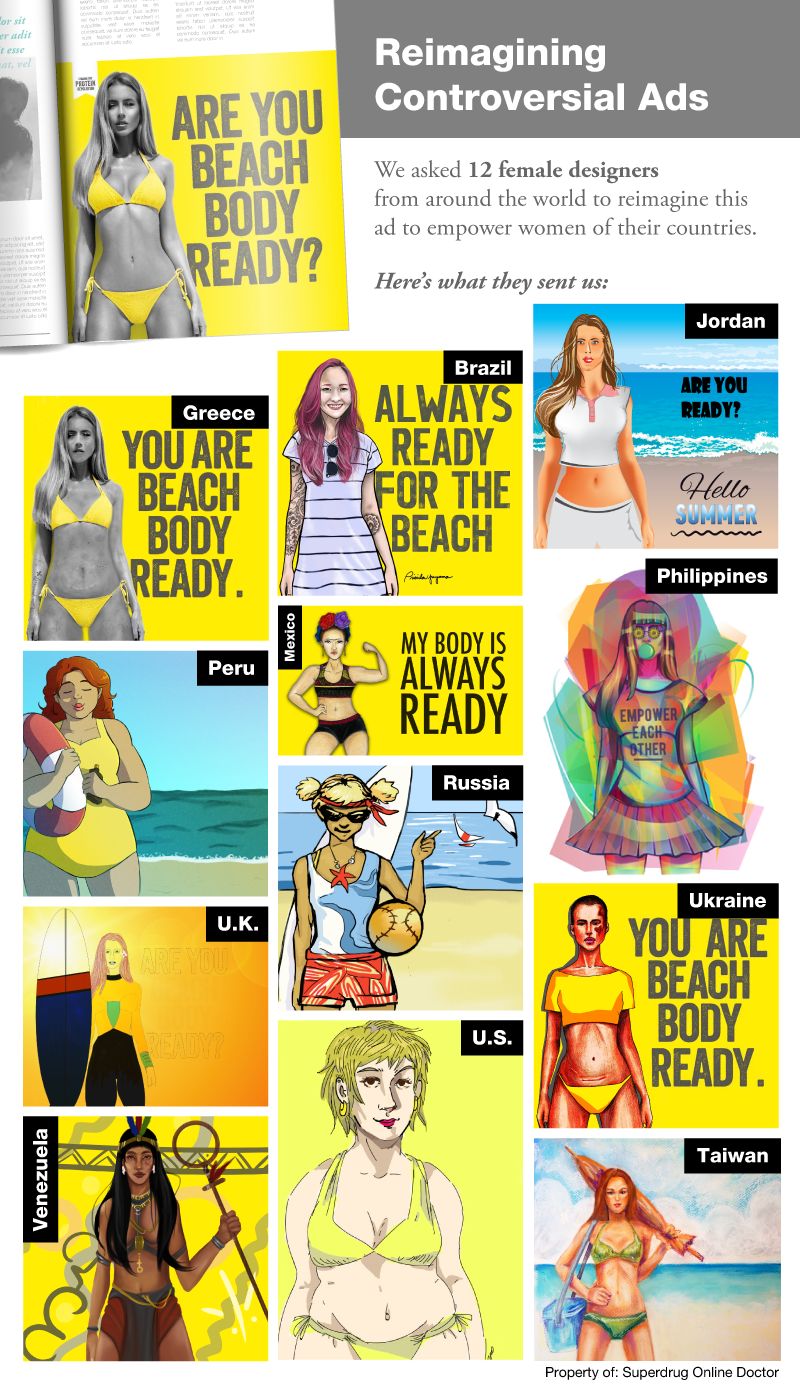 Despite attempts to counter and condemn these types of sales tactics, advertisements that showcase extremely thin women continue to make it to press. In some cases, thin models are portrayed as having “curves,” much to the dismay of the average shopper.

In one such advertisement, where a woman in a bikini asks other women (presumably) if they’re “beach body ready,” we asked female artists from 12 different countries to give us their take on the message, which suggests that being skinny is the standard if you want to enjoy the surf and sand at the beach.

Female artists from several countries depicted the model in several more articles of clothing. Designers from Brazil, Jordan, Russia, the U.K., and the Philippines chose not to draw her in a bathing suit at all, while artists from countries like Peru and the U.S. reimagined her in the same (or similar) suit but with a fuller figure, providing her with (more realistic) curves. While the artist from Greece kept her drawing closest to the original copy, she significantly reduced the gap indicated between the model’s thighs – a body image issue that’s recently been proliferated by social media.

To further emphasise that women of all looks and styles can be truly beautiful, with or without being skinny, artists from the Ukraine and Mexico depicted their drawings in styles that had a body-positive message attached. The artist from Mexico embraced her culture, depicting Frida Kahlo. The artist from the Ukraine included a face tattoo and cesarean scar, seeming to illustrate that beauty doesn’t mean adhering to social norms. In Venezuela, the artist told us she drew her model after the folklore goddess Yara. In Russia and the UK, our artist wanted to ensure that her drawing showed women who enjoy outdoor activities, not just fixating on their sexualised bodies.

Eat Your Heart Out 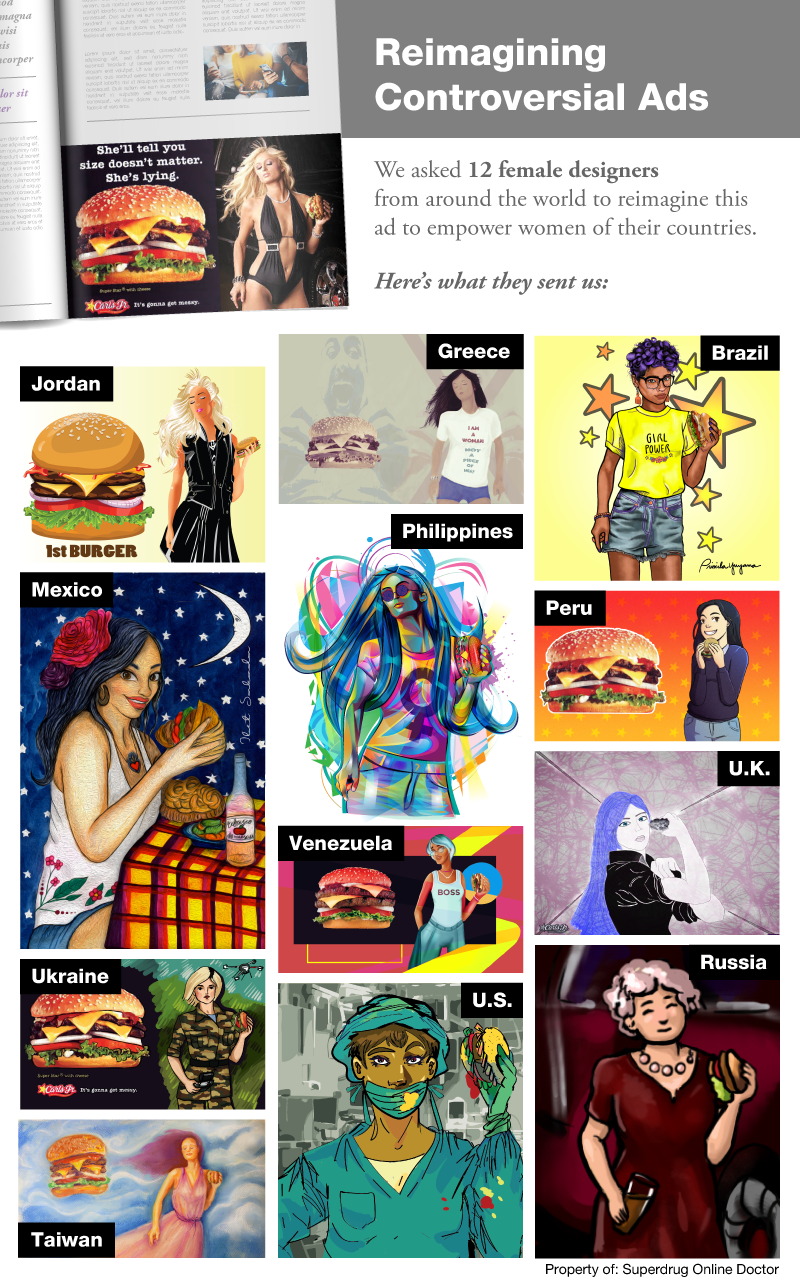 Sex can be used to try and sell anything – including cheeseburgers. While the fast-food chain may have moved away from this style of advertising, Carl’s Jr. produced many advertisements like this one, some that even included celebrities like Paris Hilton and Kim Kardashian. In New Zealand, one Carl’s Jr. ad was banned from TV.

Many of our artists took sex appeal out of the burger (and the model), and instead depicted their versions of her as simply enjoying a cheeseburger. In Mexico, the artist showed the model sitting down to eat her burger (something you would expect someone with a burger to be doing). In the U.S., instead of showing a scantily clad model devouring the burger, our artist drew their subject as a surgeon, presumably taking a quick break from her medical duties to take a nice bite out of a meal. In Russia, our artist most clearly decided to age her subject from the original model, attempting to remind the world that women of all ages and shapes can represent a love of food. Across the world, each of our artists decided to depict their subject as a proper representation, rather than a representation that is objectified by the hypersexual nature of the original advertisement.

In the Ukraine, our artist designed her “model” in camouflage rather than a bathing suit to represent women participating in military conflicts happening in the region today. In a few countries, like the U.S., Brazil, and Venezuela, our artists deliberately darkened the subject’s skin tone. In Greece, our artist decided to tackle the treatment of women by men in her culture. In the original image, the woman is placed alongside objects for male pleasure - the car and burger. Here she is kept separate from the man aggressively devouring the burger next to her.

To attempt to bring diversity to this study, we reached out to a widespread set of artists. From around the globe, we connected with artists from 12 different countries including Brazil, Greece, Jordan, Mexico, Peru, the Philippines, England, Venezuela, Ukraine, Russia, the United States, and Taiwan. Combined, these artists represent visions from four different continents – Asia, Europe, North America, and South America.

As the images our artists came up with clearly show, there is no one-size-fits-all approach when it comes to beauty or body image. These images have taken standard adverts and turned them into inspiring, empowering, and refreshing representations of what real women look like.

Regardless of skin colour, country of origin, size, or even the amount of clothing you might decide to wear to the beach, women everywhere deserve to feel confident in their bodies and their sexuality. At Superdrug Online Doctor, we believe in empowering women in their sexual health and travel needs. Visit us online at onlinedoctor.superdrug.com today to learn more.

Want to share these graphics with someone you know? It’s cool with us as long as it’s for noncommercial use only and you link back to the authors.

At Superdrug Online Doctor, we contracted freelance artists from 12 different countries and gave them the following instructions:

Using these advertisements as a base, you will re-illustrate them in a way that would empower female viewers from your country. You are free to do this in any manner you see fit.

We then compiled the images into the graphics you see above to show how these artists would have liked to see these ads.

If you have any questions, please contact [email protected]