Perhaps no new year has ever been anticipated as much as 2021. Not just for the promise of looking forward to what’s to come, but the opportunity to escape the struggles and difficulties tied to the global pandemic in 2020. The first dose of the COVID-19 vaccine was administered in the UK on December 8, suggesting there is hope for the year to come. However, for millions of people, the mental health impacts of the pandemic won’t be easily forgotten.

Months of quarantine and lockdown, the stress of the pandemic, the naturally gloomy winter months, and disrupted life routines could trigger a mental health crisis, with experts indicating as many as 10 million people in the UK, or nearly 1 in 5 people, will need mental health support as a direct consequence of COVID-19. By some estimations, 1.5 million of those impacted could be children and youth under the age of 18.

With so many people expected to experience mental health problems resulting from the pandemic, we wanted to examine the stigmas around mental health concerns and care in the UK and the U.S. Read on as we explore a survey of over 1,400 Britons and Americans and their perspective on those participating in therapy and the most common stigmas they hold, as well as who’s avoiding therapy, and what they’re doing instead to cope.

Stigmas around mental health and wellness don’t just act as a barrier between those experiencing these symptoms and the care they need. Stigmatising mental illness further isolates those in need of support, limiting their social interactions, and reducing community participation. Moreover, these biases can trigger physical and emotional abuse of people with severe mental illness.

Stigmas towards therapy were significantly reduced among Generation Z respondents, including just 2% who had a negative perception of therapy compared to 7% of millennials, 8% of baby boomers, and 9% of Generation X respondents.

Half of respondents said their opinion of someone didn’t change if they learned they were in therapy, though 40% said they felt more positively of someone when they learned they attended therapy. Just 10% of people surveyed said they felt more negatively towards someone if they discovered they were in therapy. Negative sentiment was twice as common among respondents from the U.S. (12%), compared to those in the U.K. (6%). Further, the survey found the increasingly positive perception changes to those attending therapy was also higher among Americans (46%) than Britons (29%). 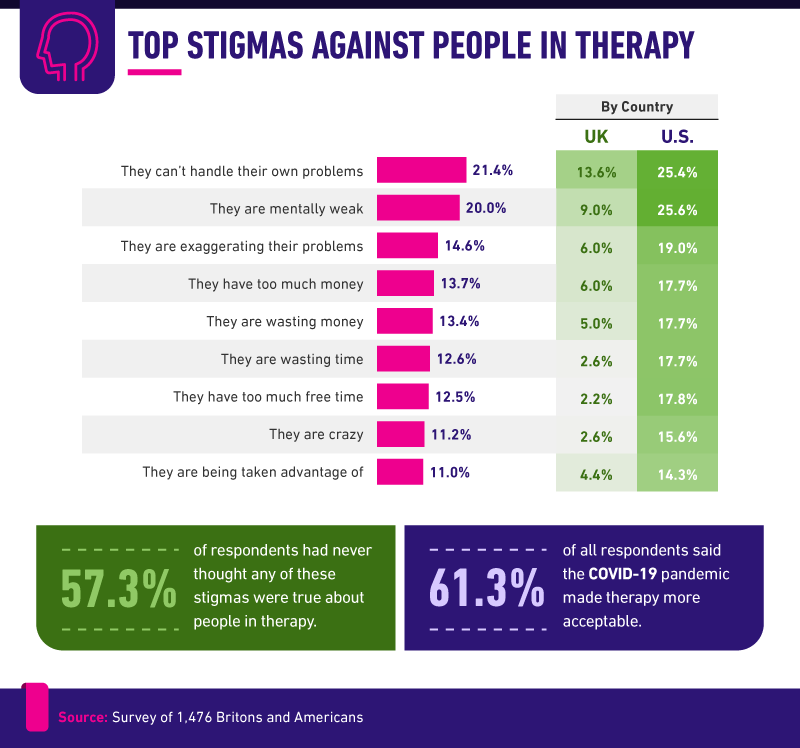 And while 57% of people surveyed from both the UK and the U.S. acknowledged they never believed any of these stigmas were true about people in therapy, another 61% indicated the COVID-19 pandemic has made therapy more acceptable. 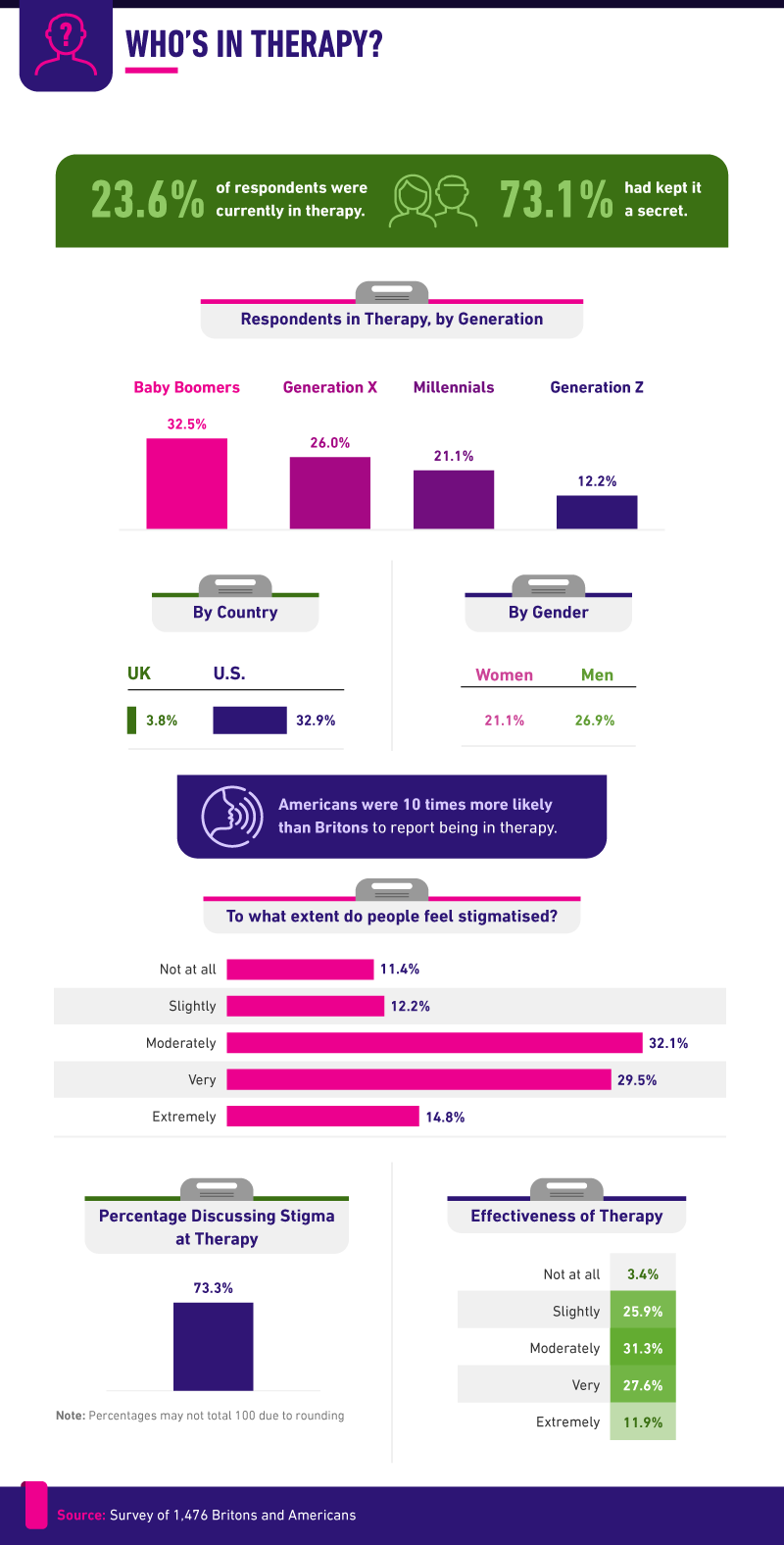 Nearly a quarter of respondents (24%) reported being in therapy at the time of the survey, but 73% kept their therapy sessions a secret. Despite the fact that younger generations had a more positive outlook on therapy, we found baby boomers (33%) and Generation X respondents (26%) were the most likely to be in therapy. Nearly 1 in 3 Americans (33%) reported being in therapy, followed by fewer than 4% of Britons. 32% of people in therapy admitted feeling the stigma of their mental health, and 30% said they felt that stigma to a large extent, while 15% felt it to an extreme extent. 73% of people acknowledged discussing the mental health stigma with their therapist.

Among the nearly 1,500 people polled, just 3% of people in therapy said they didn’t find it at all effective in supporting their mental health. Instead, 12% of respondents said therapy was extremely effective, 28% found it very effective, and 31% felt it was at least moderately effective.

Among those not currently participating in therapy, the most common barrier to care was cost (55%), followed by feeling their concerns didn’t warrant therapy (39%), lack of time (30%), and difficulty finding the right doctor (20%). Another 20% of people admitted they didn’t believe therapy would help them, and 16% indicated COVID-19 was stopping them from seeing a therapist. Americans were twice as likely to list COVID-19 as a reason for not going to therapy, compared to Britons polled.

The most common reason for avoiding therapy for baby boomers was not believing their problems were severe enough, though Generation X respondents, millennials, and Gen Z respondents identified cost as the most common reason they weren’t getting help. More than half of people (52%) said their mental health problems would have to be severe in order to seek therapy, and another 12% said they would have to be profound. 4% of respondents said they wouldn’t see a therapist no matter what was happening in their life. For those not sure of what they need for their mental health, figuring out where to turn can be daunting. A simple first step people can take is turning to services like MindCare, which provides access to specially-trained doctors who provide personalised initial diagnoses in the most comfortable way possible.

Generation Z respondents had the most positive reception to people in their life going to therapy, but 62% said their mental health symptoms would have to be severe before they went to a therapist themselves – more than any other generation. Americans were also more likely to report going to a therapist for either mild (5%) or moderate (33%) mental health symptoms rather than waiting for more extreme symptoms to develop. 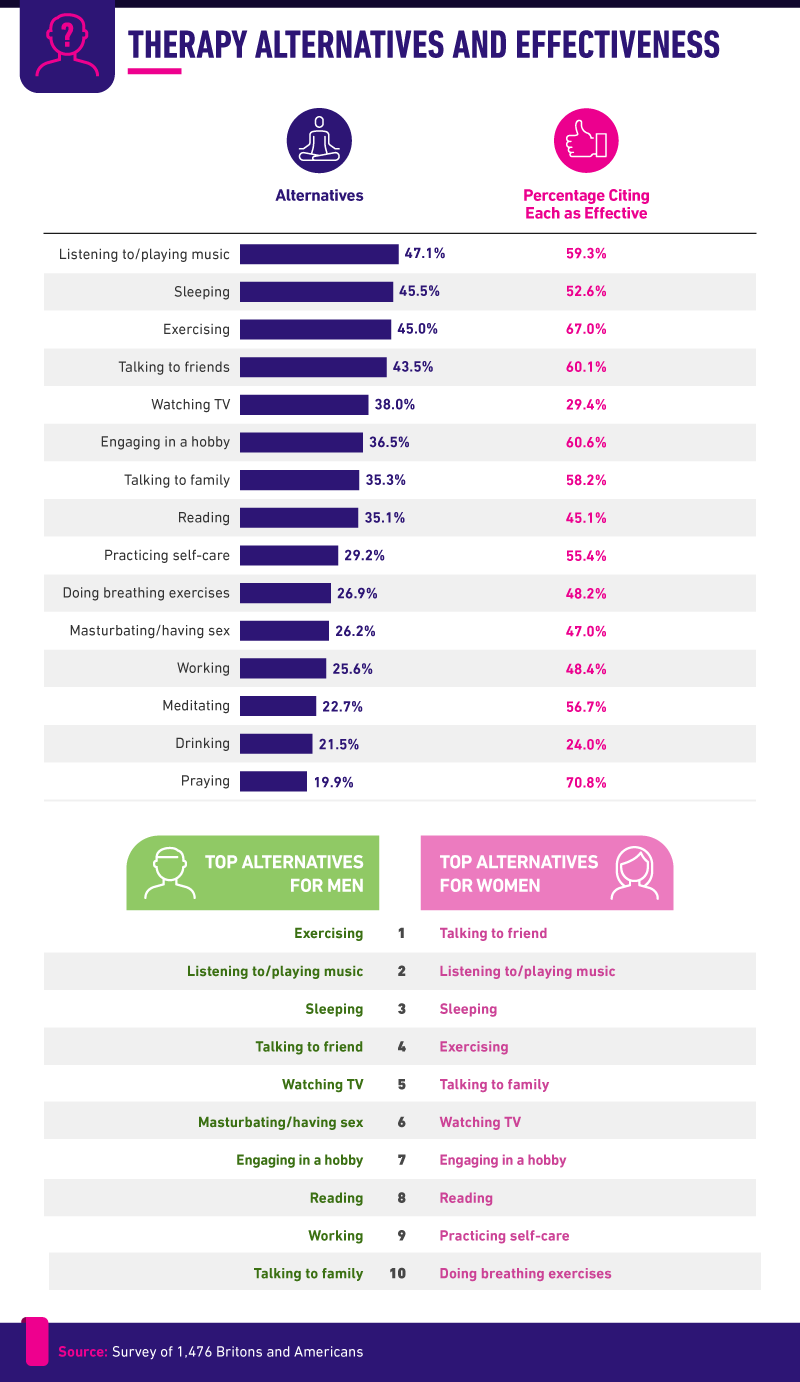 Among those polled, the most common alternatives to therapy included music (47%), sleep (46%), exercise (45%), talking to friends (44%), and watching TV (38%). Exercise was the most common therapy alternative for men, while women opted for talking to their friends. Working out can be an extremely effective method of dealing with mental health symptoms, as long as you focus on something you typically enjoy and do it frequently enough.

While generally less common, 71% of people using prayer as an alternative to therapy indicated it was effective. Other alternatives deemed most effective were exercise (67%), watching TV (61%), and talking to friends (60%). Alternatively, smoking, drinking, and drugs were all cited as the least effective substitutes to therapy.

Getting Help When and Where You Need It

In light of the COVID-19 pandemic and all of the ways our lives still feel monumentally disrupted due to the virus, mental health care may be more important now than ever. As we found, most people generally feel positively towards the ideal of therapy and those who choose to participate in it. While less common, we did find some (particularly American respondents) who wrongly considered therapy a sign of weakness or an exaggeration of symptoms. For some, cost and time presented ongoing barriers to care.

At Superdrug Online Doctor, we’re passionate about helping you get support for your mental health in the most convenient and accessible ways. Because of this, we’ve developed MindCare to help you start the journey towards improving your mental health. The MindCare app provides access to our specially trained doctors, who can help you to get a better understanding of your mental health, provide you with an initial diagnosis, and give expert advice on taking the next steps.

For this project we surveyed 1,476 people, including 1,127 who were not in therapy and 349 who were. Survey respondents were gathered through the Prolific survey platform for UK participants (32.5% of respondents) and Amazon MTurk survey platform for U.S. participants (67.5% of respondents) where they were presented with a series of questions, including attention-check and disqualification questions. 43.1% of respondents identified as men, while 56.9% identified as women. Participants had an average age of 37 years and a standard deviation of 11 years. Any participant incorrectly answering any attention-check question had their answers disqualified. Please note that survey responses are self-reported and are subject to issues, such as exaggeration and recency bias.

We’re living in unprecedented times, and everyone deserves access to mental health care when and where they need it. We encourage you to share the results of this study for any noncommercial use with the inclusion of a link back to this page in your story so your readers have full access to our findings and survey methods.