Darling, baby, honey, hun, or sugar. Whatever the phrase, if you’re in a relationship, pet names are most likely a part of your or your partner’s repertoire. Studies show pet names typically signify a strong relationship between lovers. However, not all pet names are great, and some can be downright offensive.

Let’s take a look at some of the most common (and not-so common) pet names, according to over 1,000 Europeans and Americans. We’ve compiled a definitive list of the most popular pet names for everything from typical relationship chatter to your most intimate moments in the bedroom. We even honed in on the terms of endearment that are linked to the happiest relationships and the ones that you may want to avoid at all costs. Want to know where your favorite pet name ranks? Read on to find out.

Before you start feeling sentimental from the pet names in your relationship, research has a lot to say about why we use nicknames at all and what they might have to say about a couple’s emotional connection.

It might feel weird knowing scientists link the use of pet names to the childhood love we have for our parents, but studies also suggest these nicknames (like inside jokes) are strong indications that the relationship is strong enough to have them in the first place.

Nearly 3 in 4 Europeans and 87 percent of Americans told us that they do use pet names in their relationships. More common among men than women, 85 percent of men and 76 percent of women found their own special something to call their boyfriend, girlfriend, and spouse by. As we’ll explore below, not all pet names are created equal though, and some can be particularly dreadful.

What Did You Call Me? 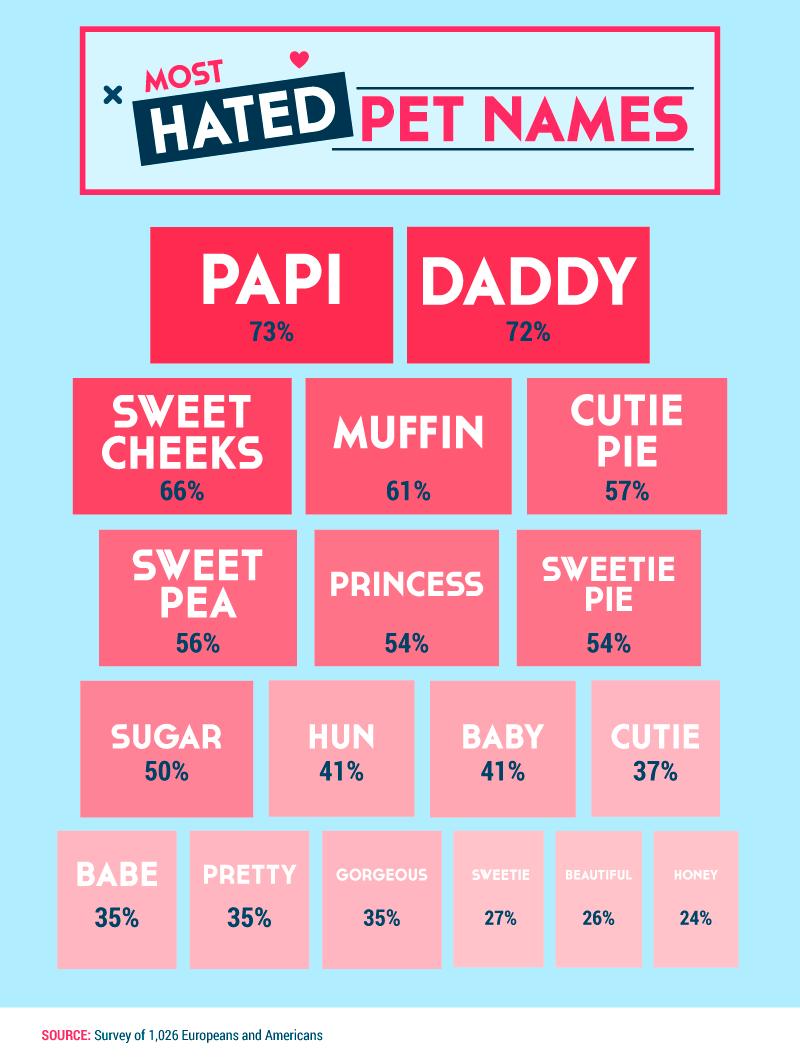 People admitted which pet names they disliked the most, and two similar monikers made their way to the top of the list: “papi” and “daddy.” No matter how much you love your significant other, they may not want to hear any type of reference to your father, especially when things are getting hot and heavy. Rated as the worst pet name on our list, 73 percent of men and women agreed “papi” was better left on the radio and out of the bedroom.

Other commonly distasteful pet names included “sweet cheeks,” “muffin,” “cutie pie,” “sweet pea,” and “princess.” These overly affectionate nicknames were among the most disliked terms of endearment, according to more than half of people polled. Looking for a safer bet? Stick to names like “honey,” “beautiful,” and “sweetie,” which tended to bother fewer people. 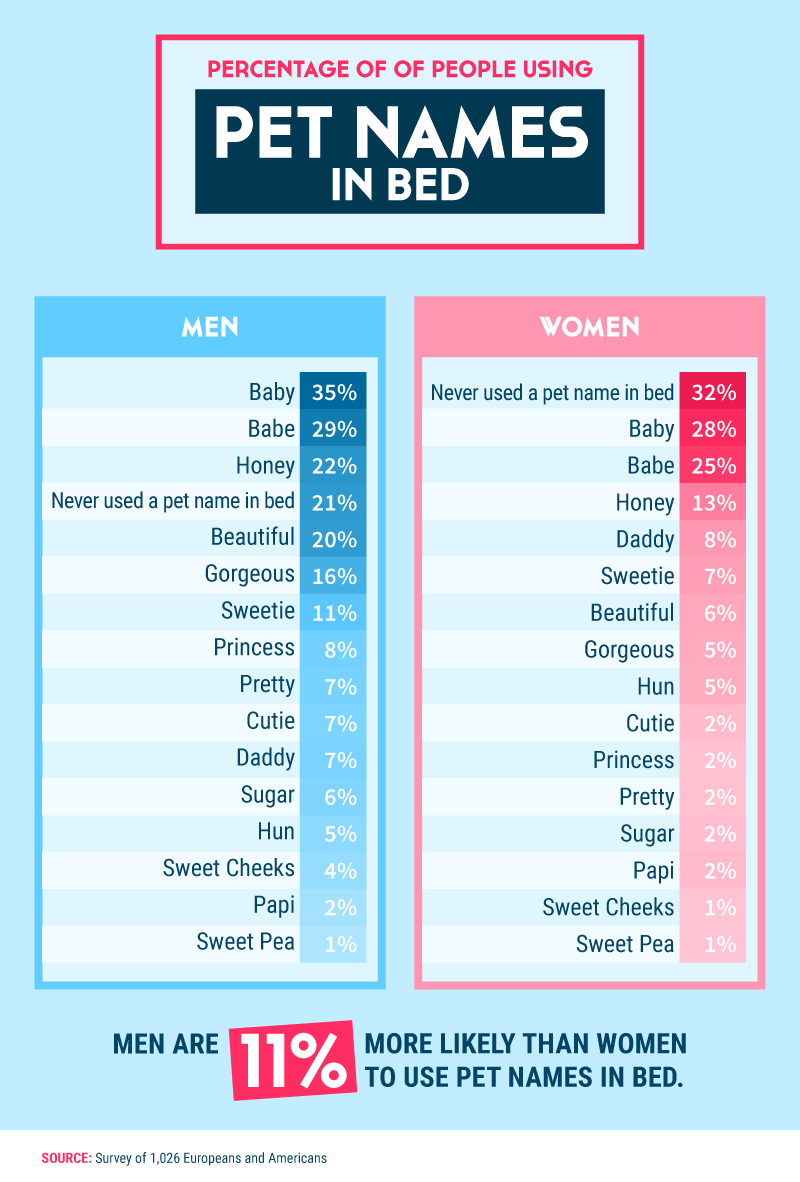 Talking to your partner in the bedroom, whether it be “dirty” or intimate, can be a fun, free turn-on for many. Often, the language in sexual scenarios can involve romantic and/or kinky pet names. More than 1 in 3 men used “baby” in bed, while nearly as many women preferred not to use pet names at all during sex.

Pet names including “baby,” “babe,” and “honey” were the most popular nicknames used in the bedroom among ladies and gents. Studies have shown men appreciate intimate conversations not just because they can lead to sex but also because these emotional connections can help make sex more meaningful.

Ranking last among the nicknames you might hear tossed around during sex, “sweet cheeks,” “papi,” or “sweet pea” were used less than 5% of the time by both Americans and Europeans. 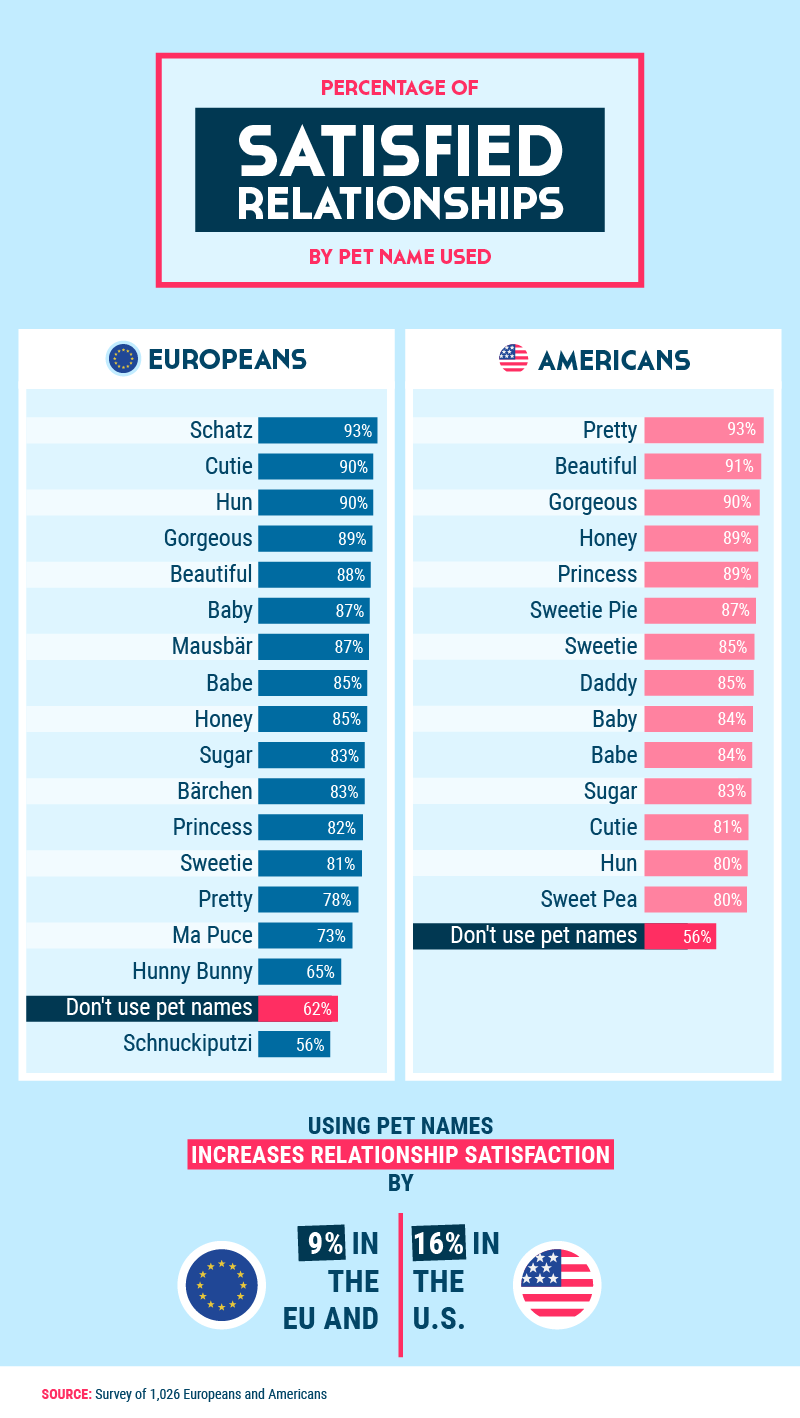 Relationship experts typically have good things to say about the power of pet names. They’ve explained that they can signify strong emotional connections, but what exactly do these nicknames (or lack thereof) really indicate about how happy we are with our significant other?

In Europe, the most agreeable pet names were slightly different. Ninety-three percent of Europeans using “schatz” to affectionately refer to their partners (a phrase mostly used in Germany meaning “my love” or “darling”) felt satisfied with their relationships, followed by “cutie” (90 percent), “hun” (90 percent), and “gorgeous” (89 percent). Unlike Americans, 62 percent of Europeans not using any pet names were still happy with their relationships. 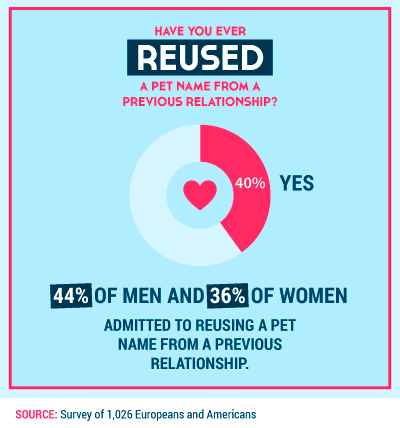 Pet names are often considered gratifying among lovers because they act as a secret love language. That is, of course, unless you’ve used your partner’s current nickname with an ex as well.

Forty-four percent of men and 36 percent of women admitted to recycling pet names from one relationship to the next. These personal tags or expressions are meant to be intimate and private between couples, but that didn’t stop 2 in 5 people from converting the same labels of affection from one person to another. Perhaps to get the full range of emotional benefits from establishing pet names with your partner, it might be best to consider new names for each lover – after all, you’d probably hate to get them confused with each other. Even if your pet name deviates from our most popular list, it may be worth calling your partner by a unique name, all their own.

Under the right circumstances (and with the right nicknames in mind), pet names aren’t just a cute way to get your partner’s attention – they can be a sign you’ve gotten comfortable enough with each other to develop a love language. While not always appropriate in public (at least according to some), it’s not uncommon for couples to develop their own affectionate code names that might even work their way into the bedroom. But before you get carried away, make sure you aren’t using offensive terms like “daddy” or “sweet cheeks” that could put a serious damper on the mood.

Whether it’s your “baby,” “honey,” or “schatz,” Superdrug Online Doctor is here to keep you and your partner healthy in between and outside of the sheets. We take the hassle and embarrassment out of visiting a doctor for some of the most common sexual health needs by letting you connect with a registered UK doctor from wherever you are. Order what you need online and we’ll have it delivered straight to your home.

We surveyed 1,026 respondents to gauge their perceptions of pet names, or terms of endearment, in relationships. Only participants who experienced a romantic relationship for at least one month were able to participate in the survey. 49% were European, and 51% were American, with approximately 47% being male, 53% female, and less than 1% identifying outside of those two genders. Respondents were aged between 20 and 71, with a mean of 37.7 and a standard deviation of 11.5.

No statistical testing was performed and, as such, these data are purely exploratory.

Feeling inspired by our pet name project, hun? Feel free to share our study with your readers for any noncommercial use, but just makes sure to link back to this page, so our contributors get credit for their work too. Have questions or comments? Email them to [email protected].