People are now increasingly revealing their answers to this once-taboo question via social media. Instagram and other social media are more capable than ever before of painting a picture of the importance people place on their sexual lives.

To get a better sense for how such revelations regarding users’ sexual and romantic lives vary across borders, we collected all geotagged Instagram posts captioned with any of a number of relevant hashtags. In total, we collected 645,368 posts from the U.S. and 650,636 posts from European countries.

While Instagram has banned #sex outright, it continually plays whack-a-mole with other potentially inappropriate hashtags. Surprisingly, posts relating to sex toys and male-enhancement products had not been banned at the time the data were gathered.

The following series of maps depicts how different hashtags relating to sexual health and relationships compare in prevalence with other topics such as #xbox, #pizza, and #shopping. By comparing which U.S. states and countries post more about one topic versus another, these maps attempt to reveal regional variations in the extent to which users value their sex lives and relationships over other common topics.

In the above graphic, we take a look at the hotspots for posts about sex toys by coloring the maps according to the number of posts per 100,000 residents in each state or country. The top five states for these posts in the U.S. are host to some of the country’s biggest cities such as New York and Los Angeles as well as America’s notorious vice capitals Miami and Las Vegas.

"Adolescents from northern and western Europe report the highest contraceptive pill use, while rates are lowest in southern and eastern Europe. Acceptance of sexual activity may be broader among those with higher pill use (linked to culture, religion, politics and economics), which enables better access to contraception and sexual health services for young people."

The above quote seems to align nicely with the prevalence of posts about sex toys in this region. 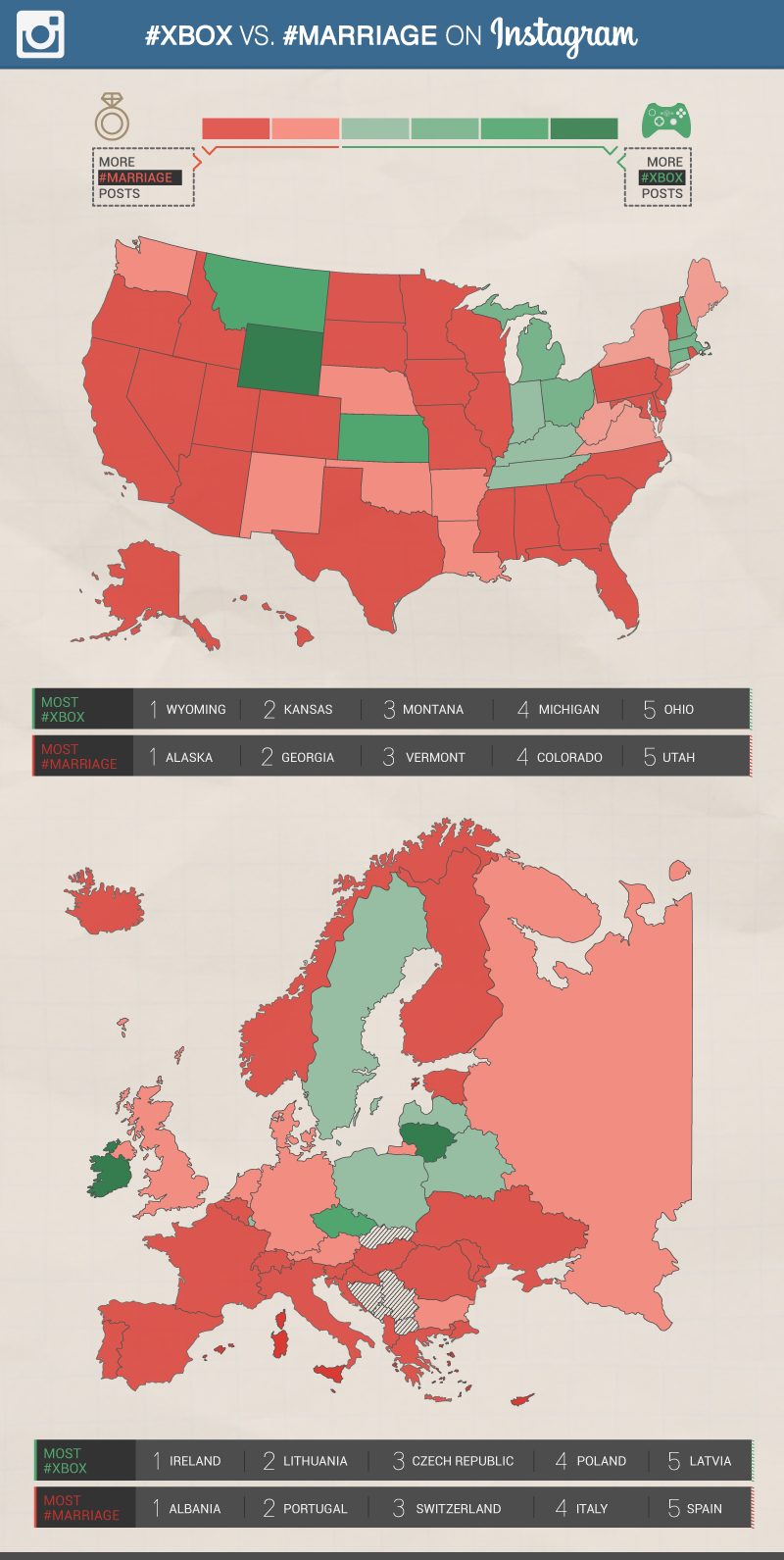 In the maps above, we compare numbers of #xbox and #marriage posts as a barometer for whether people are more interested in love or video games. Similar to the sex toys vs. #love map, marriage dominates across both the United States and Europe, with some exceptions. In fact, in the U.S., it’s conservative states, such as Wyoming, Montana, Kansas, and Tennessee, that are more likely to post about their Xbox than their marriage. 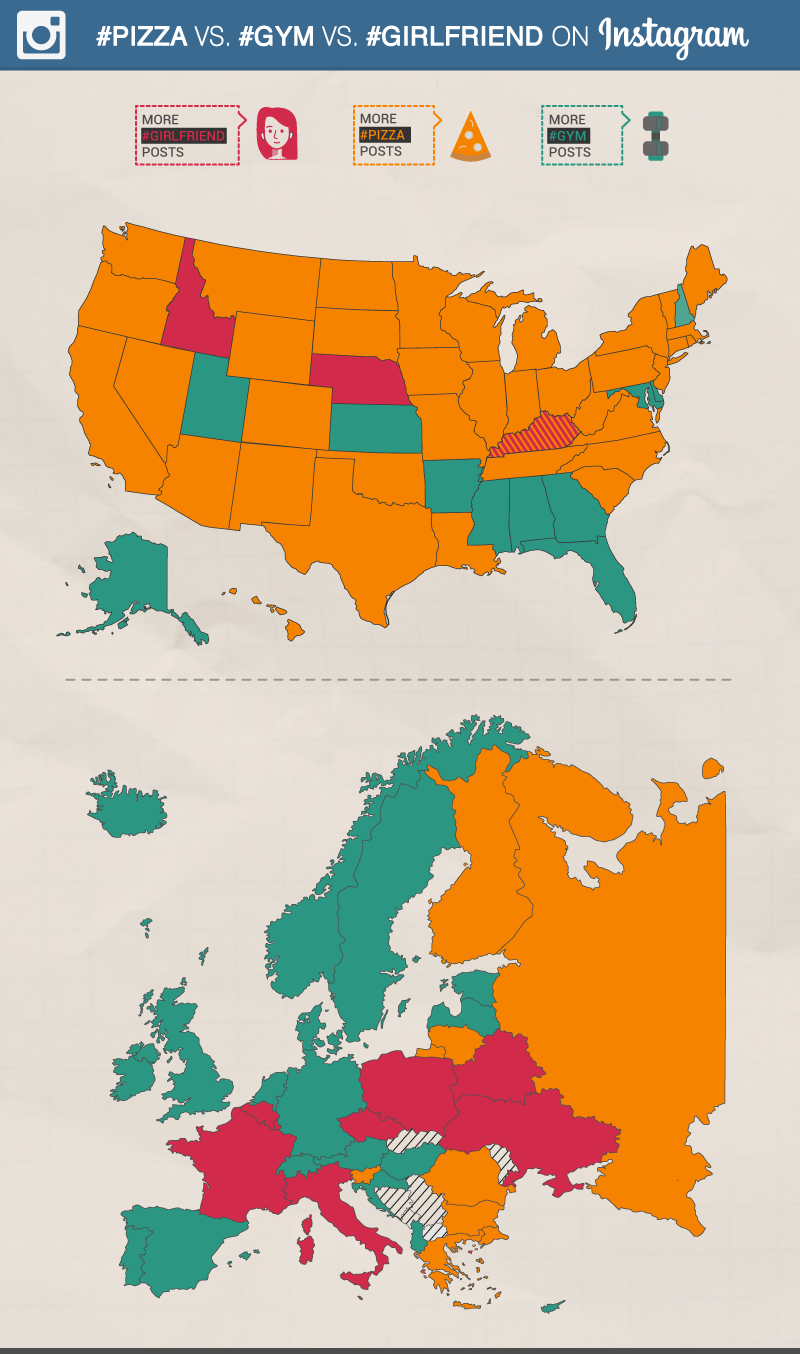 Ever hear someone say “pizza is my girlfriend?” or “the gym is my girlfriend?” Here we get a look at which areas make those statements reality by depicting which U.S. states and European countries post more often about a #girlfriend than #pizza or #gym.

In the United States, #pizza dominated, as the majority of the nation fell for the charm of a slice of cheesy goodness. Surprisingly, it was Deep South states Alabama, Mississippi, and Georgia that seem to have their hearts set on pumping iron. In Europe, this was more regionally divided, as western Europe posted more about the gym and eastern Europe posted more about pizza. The two European countries most noted for their romanticism, France and Italy, were the western European countries posting most about girlfriends. 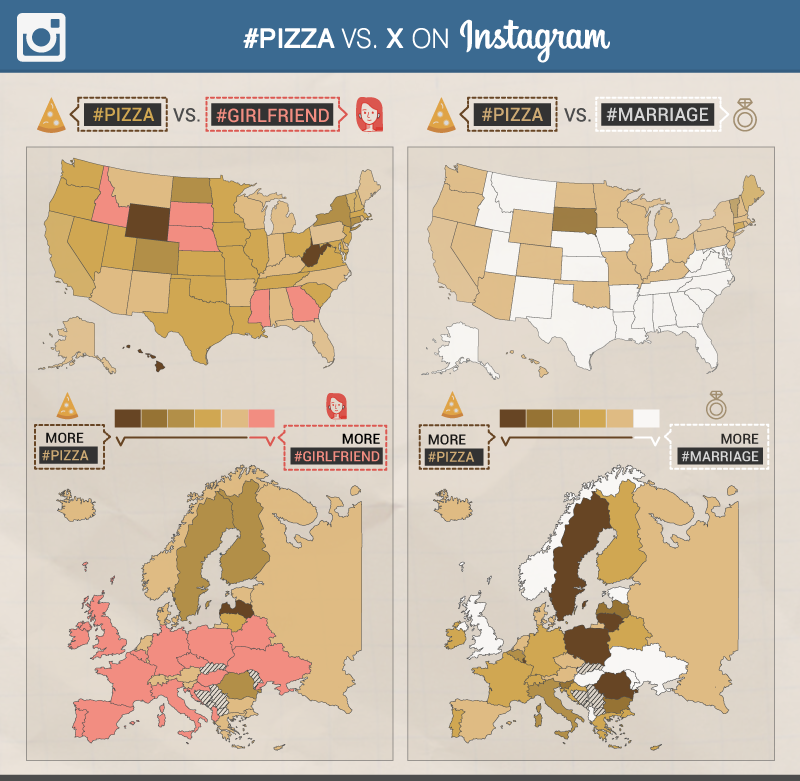 While in the previous asset we saw pizza compared to girlfriends and the gym, here we use it as a barometer or control group to show how U.S. states and European countries value committed relationships.

While #pizza beats out #girlfriend across most of the U.S., when you compare #marriage posts to #pizza posts, the victory of #marriage over #pizza seems to align with more traditional family values for states around the Bible Belt. This is the same in other conservative states in the West, including the Mormon capital of Utah, while pizza reigns supreme in the more liberal northeastern states. 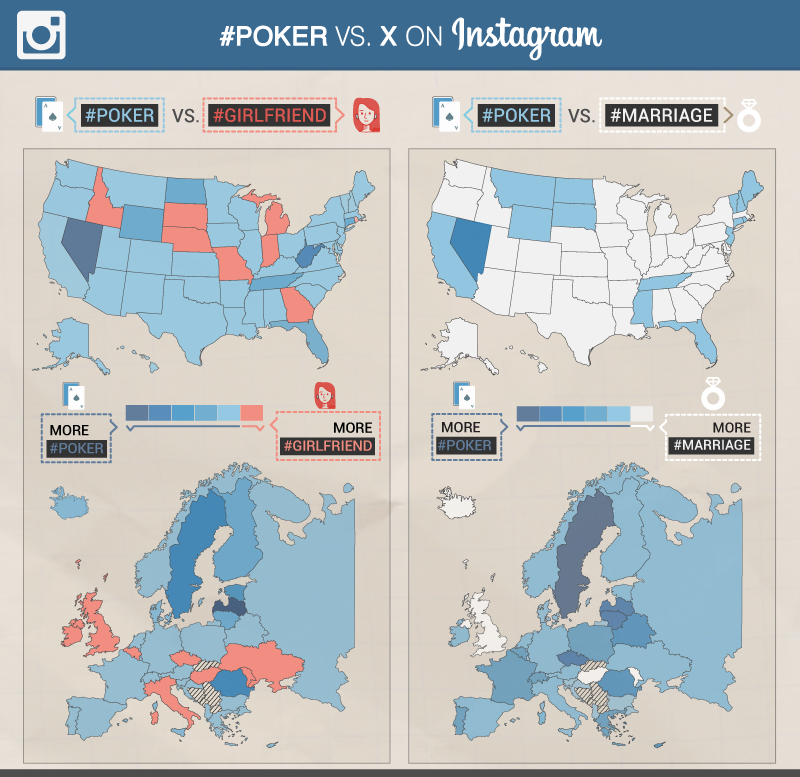 We’ve all seen it in movies and perhaps even know people who do it: The guys get together for a night of playing poker to get away from their spouses or girlfriends. So we decided to take a look at how much people talk about poker versus their girlfriend on Instagram.

The answer: quite a lot. Guys in most states across the U.S., save for a few conservative states such as Missouri, Nebraska, and Georgia, more frequently post about poker than their girlfriends. However, much like our comparisons with pizza, bringing marriage into the mix changes the landscape. Save for a handful of states in the West, most of New England and some parts of the South, marriage dominates the conversation in the United States.

In Europe, it’s again a different story. While #poker beats out #girlfriend in most areas, it’s clear that most of the continent prefers to post about topics other than holy matrimony, as poker flat-out dominates the region in terms of posts. 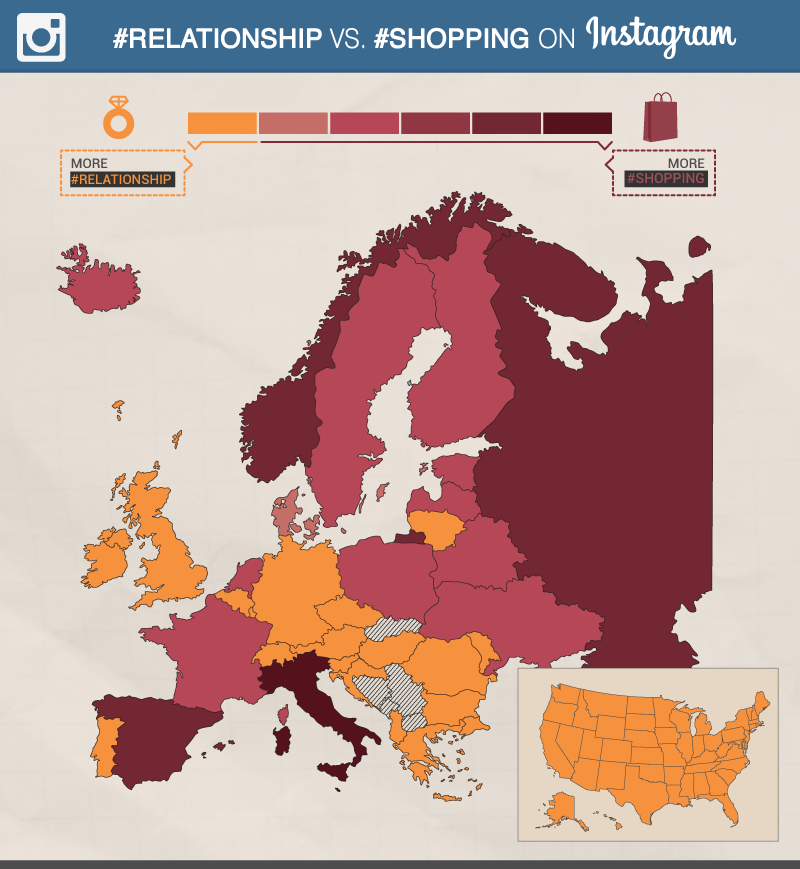 So poker is the stereotypical man’s getaway from relationships. But what about the girl’s night out? In the maps above, we compare the number of posts containing the hashtags #relationship and #shopping across the U.S. and Europe.

Despite its materialistic culture, surprisingly, #relationship beat out #shopping across the entire U.S., whereas Europe shows more regional variation. Fashion-conscious countries such as France and Italy had high numbers of posts about shopping. Italy, in fact, was the shopping epicenter of Europe. 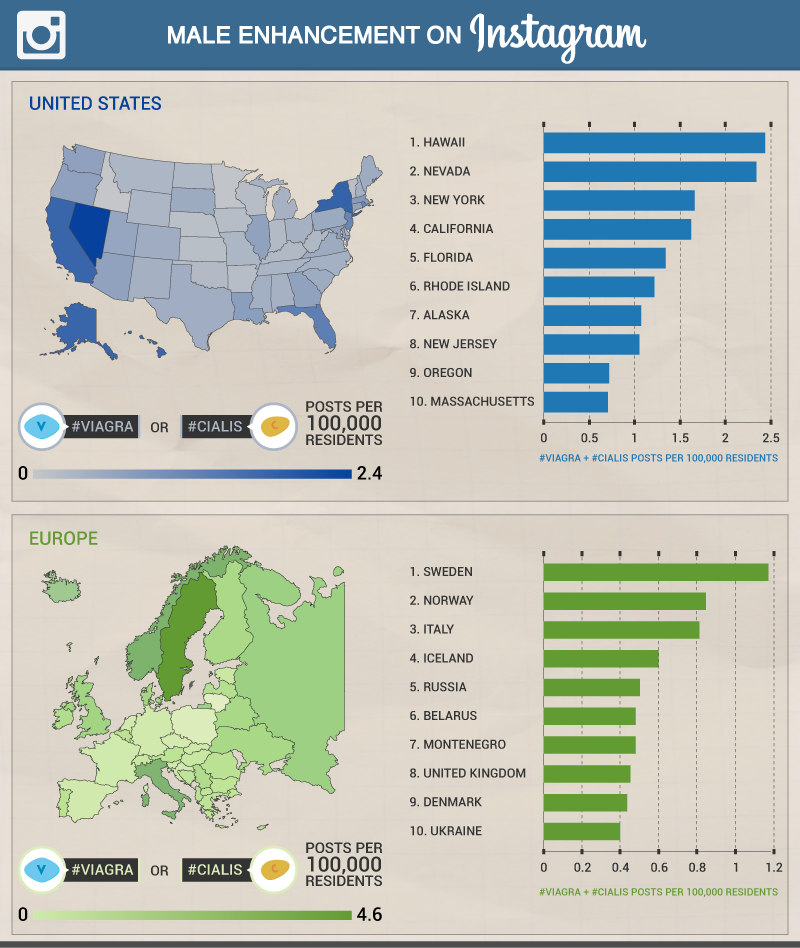 Here we turn our attention to another sex topic, the prevalence of men – and possibly some women – posting about male enhancement pills. While Instagram is most popular among younger generations, and Viagra is most popular among older generations, this didn’t stop the topic from popping up in the data we pulled. For the U.S., an interesting insight emerges when comparing this map with the one depicting sex toy-related posts. The same top five states posting about male enhancement are also the same top five posting about sex toys. Might men in these states be having trouble satisfying their partners?

In Europe, a similar pattern emerged. Where Norway was a top country posting about sex toys, we see this nation posting about male enhancement as well. Scandinavian nations were the ones most likely to post about male enhancement pills, with Sweden, Norway, and Iceland wrapping up the top five. This again falls in line with the World Health Organization's quote suggesting these nations were more sexually open and active. 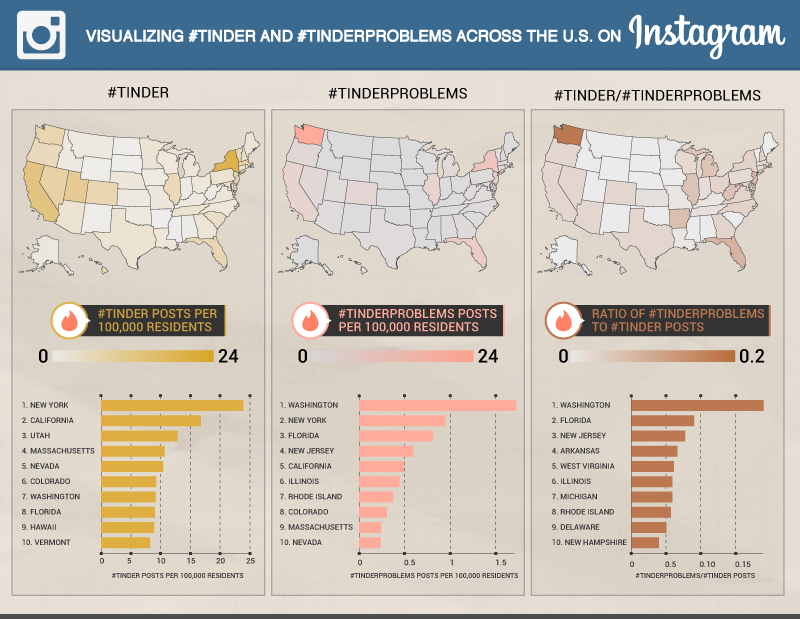 Another way people discuss their sex lives on Instagram comes from posts relating to Tinder. The most posts about Tinder overall came from a handful of states you might expect – New York, Nevada, Massachusetts, and California – but one you might not: Utah. We can attribute the first four as being home to major United States metropolitan areas with lively hookup scenes such as New York City, Las Vegas, and Boston. While in Utah, might the popularity of Tinder be reactionary to the state’s traditional Mormon values?

User interaction on Tinder ranges from pleasant and jovial on the positive side to creepy and lewd on the negative side. Tinder has been criticized for not being a safe place for women and even playing host to sexually aggressive users. This led one Tinder employee to launch her own female-friendly app called Bumble. These issues as well as others have led to the rise of the hashtag #tinderproblems, which users often post with screenshots of the messages they receive in the dating app. 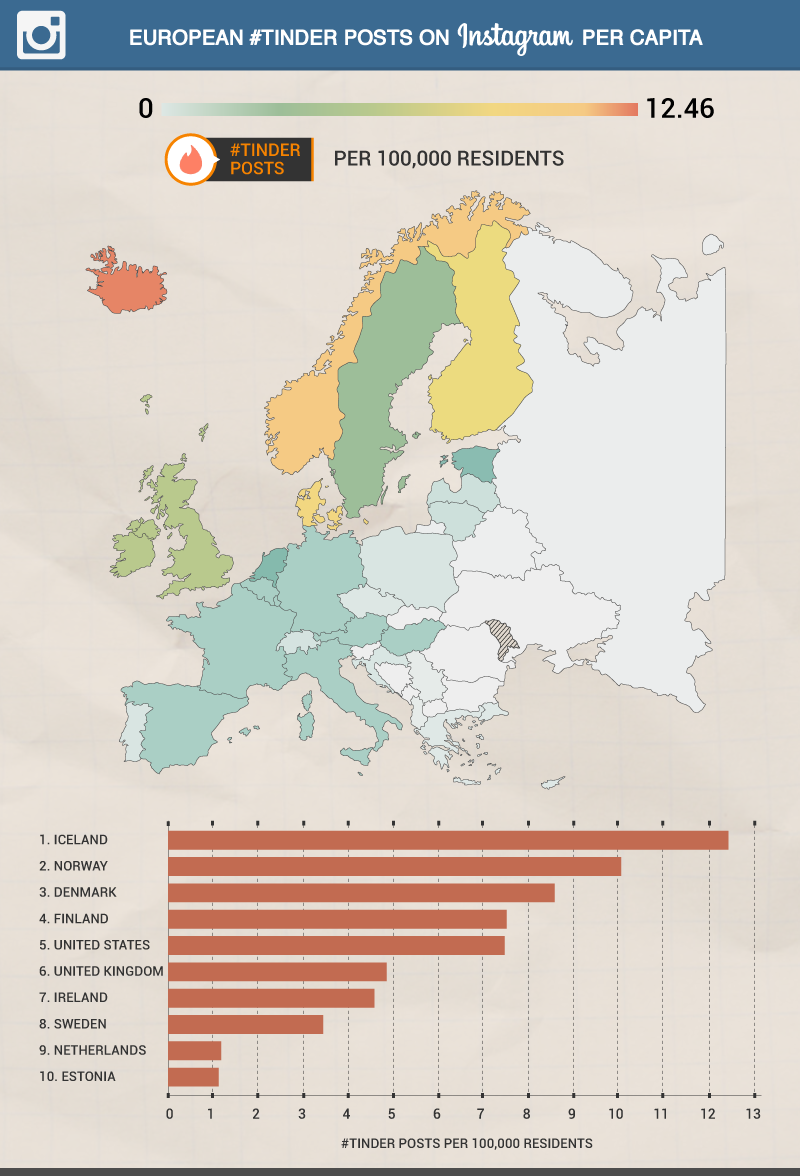 In Europe, #tinderproblems didn’t have enough prevalence to be analyzed. However, we did take a look at #tinder to see where people were posting about their interactions with the app in Europe.

While Iceland was the top poster for the hashtag #tinder in Europe, it outranked all but the top three states in the U.S. as well.

Given insights from the other maps on this page revealing that northern Europeans have a higher interest in discussing sexual satisfaction on social media, it shouldn’t come as a surprise that they top the list here as well.

All across the U.S. and Europe, people are using Instagram to talk about sex and relationships. While this research is intended primarily to entertain, analyzing the regional trends revealed by the aggregate of such posts has provided some insights on the cultural patterns that may be driving the regional differences visualized here.

What we saw is that certain areas’ cultural values come into play when posting about sex and relationships. ln more traditionally conservative areas, marriage comes up more often. In more liberal regions and areas known for vices, people post more often about sex toys. In areas more known for hookups, Tinder finds its way into the conversation.

Geotagged posts account for around 30% of all Instagram posts, and they are the ones with an attached latitude and longitude. To determine the countries and states that each of these geotagged posts originated from, we used the Open Street Map API.

While this research is intended primarily to entertain, this analysis does seem to align with deeper societal issues, and we encourage journalists and bloggers to cover the results on this page. Onlinedoctor.superdrug.com supports the reuse, rehosting, and discussion of these assets and results. We ask that those doings so link to onlinedoctor.superdrug.com and this page so that content consumers can learn more about this research and have access to all assets that are available.