Performance Anxiety in the Bedroom

Performance anxiety is an issue faced by many people every day, but it isn’t reserved for public speaking or acting on stage. Performance anxiety can strike far closer to home – as close as your own bedroom. Sexual performance anxiety occurs when feeling stressed about having sex leads to anxiety, which can then trigger performance problems such as erectile dysfunction or an inability to orgasm.

Sexual performance anxiety is a common issue, and while men are more commonly diagnosed with this specific problem, it occurs in both genders and can happen at any age. We surveyed 1,022 sexually active adults in Britain and the United States about their experiences with performance anxiety. We asked who has experienced it themselves and who has seen it in a partner? How often does it happen and what do you do when it does? We learned about some of the most common contributing factors to performance anxiety, but also about the most effective methods for treating it. Best of all, our survey revealed that it can be overcome completely.

Performance Anxiety Is More Common Than You Might Think

Sexual performance anxiety may be a common problem, but just how prevalent is it? We sought the answer to this question and more in the first section of our study. 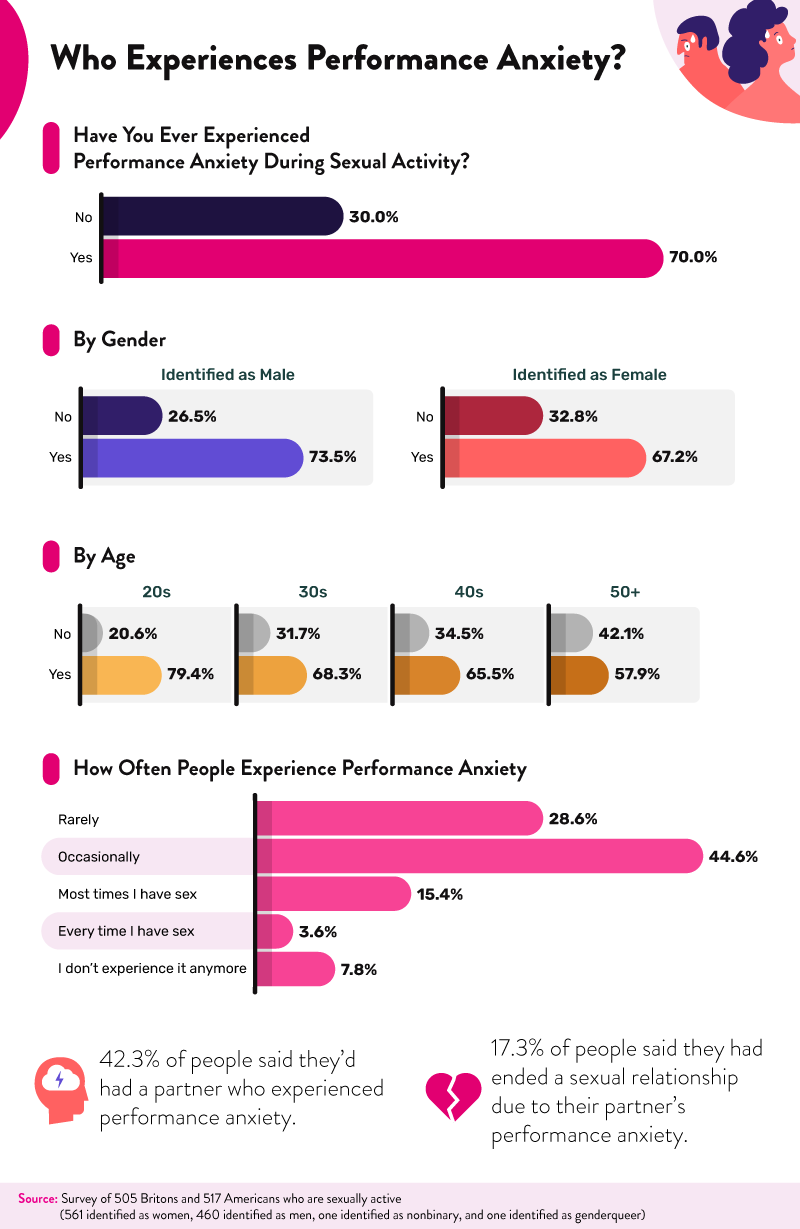 Performance anxiety in the bedroom appears to be linked with age. While nearly 80% of 20-somethings reported experiencing performance anxiety, less than 58% of people aged 50 and over said the same. This suggests that performance anxiety is more prevalent in younger generations, corresponding with recent research that found impotence rates have doubled in the past 25 years. Sexual dysfunction is commonly linked to psychological conditions including depression, a condition that has also been on the rise globally since 1990. 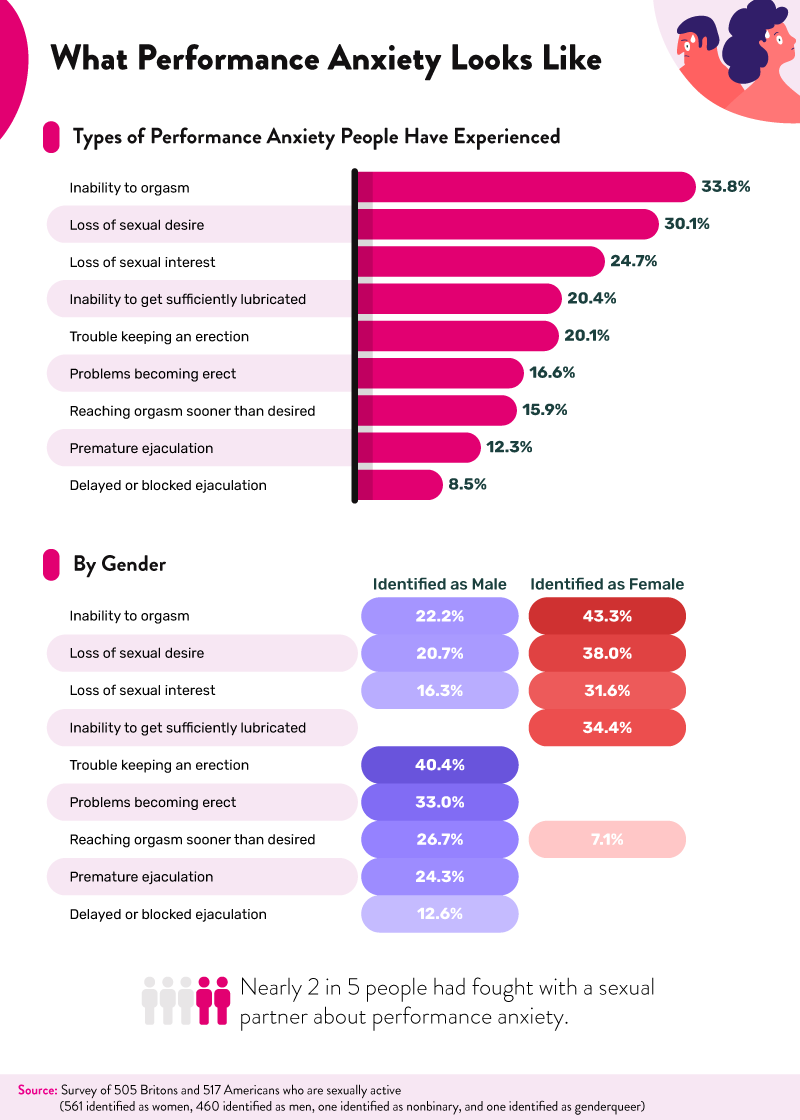 Sexual performance anxiety can manifest in many forms and often looks different between those who identify as women and men. According to our study, the most common type of performance anxiety is an inability to orgasm, reported by more than a third of respondents. For others, performance anxiety resulted in orgasming too soon or premature ejaculation, although these are less common symptoms. A loss of sexual desire or interest were other symptoms experienced by respondents.

For those who identify as women, performance anxiety can also mean an inability to get lubricated enough for sex. For those who identify as men, it can make maintaining an erection difficult. While performance anxiety is more often diagnosed in men, there were nearly equal results for the prevalence of being unable to orgasm in women and the inability to keep an erection in men. In fact, women were slightly more likely to report troubles with reaching an orgasm than men were with maintaining an erection.

Difficulty maintaining an erection was the most common symptom of performance anxiety among men, with over 40% reporting this problem. For women, the most common symptom was an inability to orgasm (over 43%). Only 22.2% of men reported being unable to orgasm, but one-third said they had problems becoming erect. Over 26% of men said they have reached an orgasm sooner than desired, something very few women struggled with (just 7.1%). Women, on the other hand, were more commonly plagued by a loss of sexual desire or interest than men.

Performance anxiety in any of its forms can cause strain on a relationship. Nearly 2 in 5 people said they had fought with a partner about performance anxiety. If you or your partner are anxious about sex, talking about it together can help take the pressure off and create a supportive rather than combative environment. For some, finding the right medication can also make a world of difference. 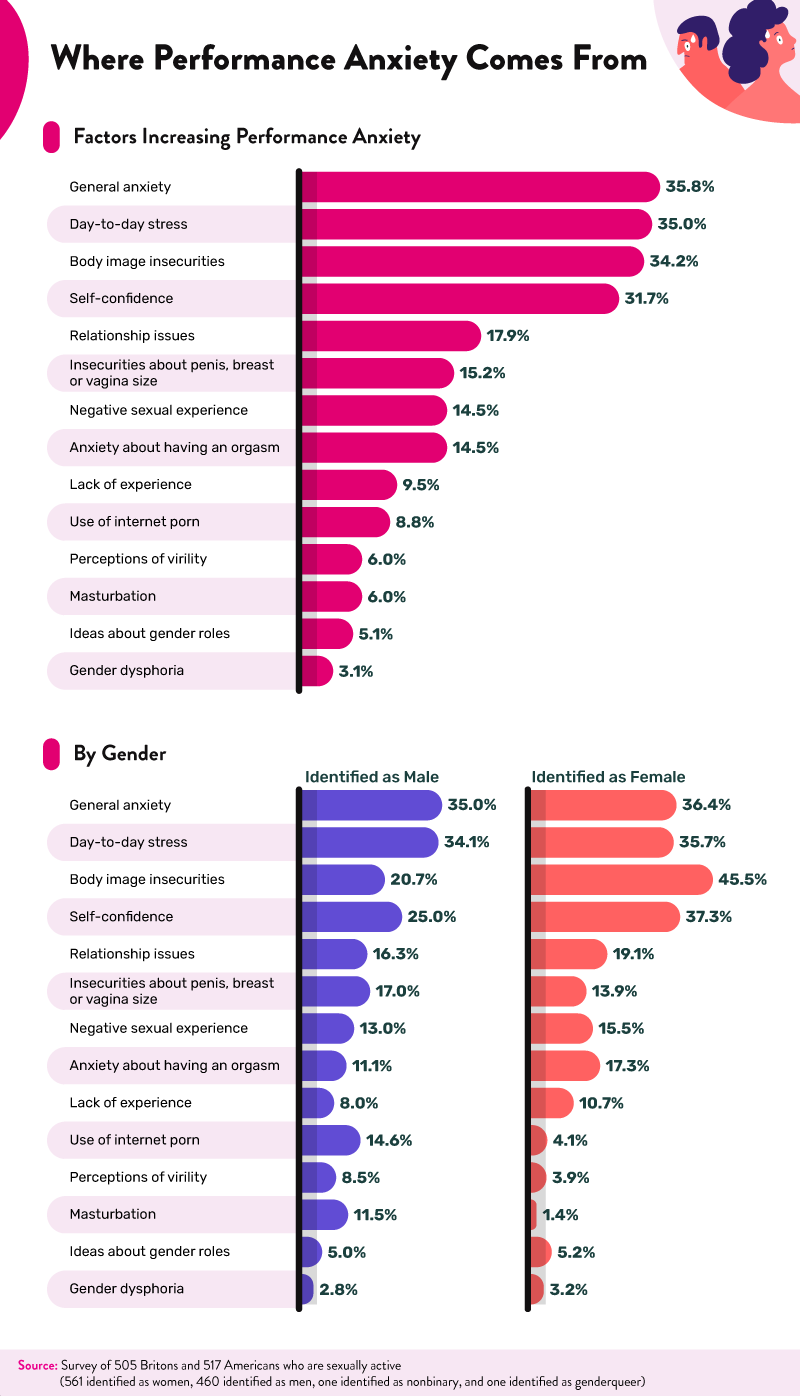 Performance anxiety can be caused by a multitude of factors. According to our survey, the most common of these are general anxiety, stress and insecurities related to body image. Interestingly, while anxiety and stress were almost equally common exacerbating factors among men and women, women were nearly twice as likely to be affected by body image issues.

Stress is the body’s response to an event or situation that causes mental or emotional pressure, whereas anxiety is the body responding to stress and can cause feelings of unease, fear, or tension. The two are inextricably linked, so it makes sense that they topped the list of factors that contributed to people’s performance anxiety.

Other common factors that may increase performance anxiety included self-confidence and relationship issues. Women were more likely than men to cite both of these as contributing factors. Men were more likely than women to say insecurities about the size of their genitalia were an issue, but not by much. 17% of men said insecurities about penis size affected their performance anxiety, while almost 14% of women said the same about the size of their breasts and/or vagina.

Around 14.5% of all respondents said negative sexual experiences in the past contributed to their performance anxiety, with women, at 15.5%, slightly more likely to feel this way than men at 13%.

With so many potential factors, overcoming sexual performance anxiety can seem nearly impossible. So how do you do it? To find out, we looked to our respondents to see exactly how they have managed to mitigate or conquer their difficulties. 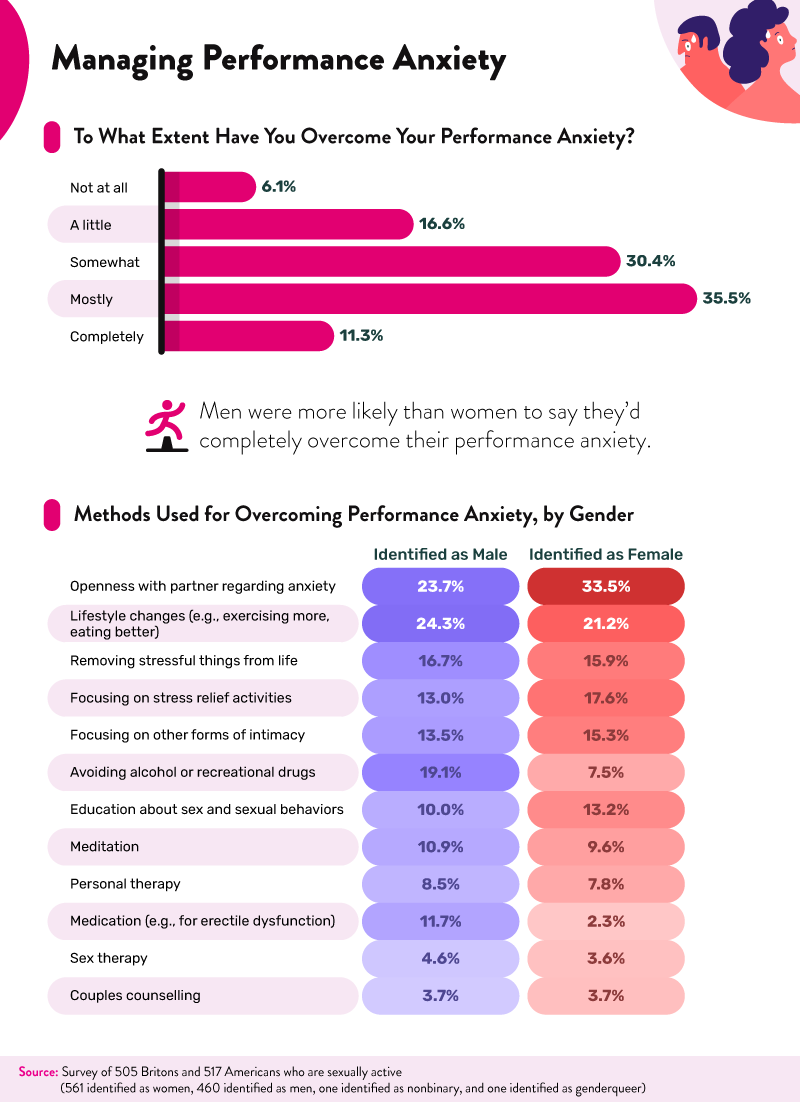 One of the hardest aspects of performance anxiety is that despite its prevalence, there is no recognised diagnosis, which has led to minimal research into treatment. Despite this, the majority of respondents said they have been able to mostly overcome their performance anxiety. Over 11% said they’d completely overcome it, with men more likely than women to say this.

The most common method used for overcoming performance anxiety was being open about your anxiety with your partner. Women, in particular, found this to be the most helpful means of overcoming it. For men, lifestyle changes, such as exercising more or eating better, were actually a bit more helpful. Women also found lifestyle changes beneficial, making it the second most commonly used method for overcoming performance anxiety.

The biggest disparity between male and female responses related to abstaining from alcohol or recreational drugs as a way to overcome performance anxiety. Over 19% of men said they avoided alcohol or recreational drugs to overcome their performance anxiety, compared to only 7.5% of women. Men were also considerably more likely to seek medication than women.

Everyone knows it takes two to tango, so how do couples manage intimate moments when one of them is hindered by performance anxiety? Again, we looked to our respondents for the answer in the last section of our study. 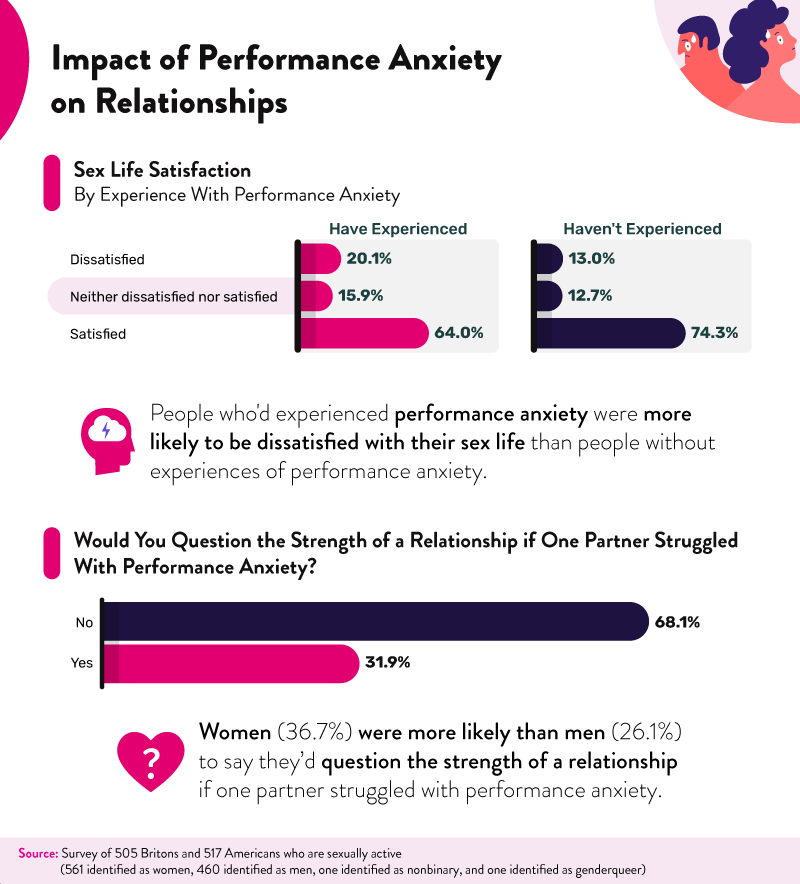 As important as intimacy is to a relationship, experts say struggling with it does not mean the end. Indeed, our previous research found that both men and women valued their relationship based on far more than just the quality or quantity of their sex life.

Performance anxiety is more common than many people believe. Due to the stigma it carries, people don’t often open up about their experiences. But our research shows that the vast majority of people have encountered performance anxiety during their sexual interactions, either in themselves or their partner.

The good news is that overcoming performance anxiety is almost as common as experiencing it. Treatment methods vary, however, so the first step may be learning more about the issues affecting you or your partner. At Superdrug Online Doctor, we’re here to help. From learning about sexual health for men and women to how to treat common concerns, our online database makes it easy to get the help you need so you can have the healthy, happy sex life you deserve.

We surveyed 505 Britons and 517 Americans about their experiences with sexual performance anxiety. Respondents were 54.8% women and 45% were men. One respondent was nonbinary, and one was genderqueer. The average age of respondents was 35.4.

When asked about satisfaction with their sex life, respondents were given the following scale of options:

The data we are presenting rely on self-report. There are many issues with self-reported data. These issues include, but are not limited to, the following: selective memory, telescoping, attribution and exaggeration.

If you enjoyed our research into sexual performance across genders, we’d love for you to share it with others. We ask only that if you do share, it’s for noncommercial purposes and includes a link back to this page so that everyone can benefit from the findings in their entirety. This also helps the authors get the credit due for all their hard work. Thank you.