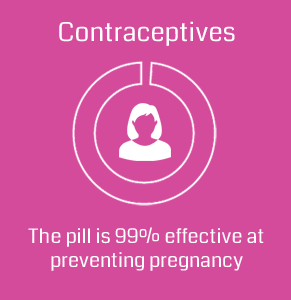 "A contraceptive pill for men would allow men to have more control over contraception. At the moment, the only options for men are condoms or a vasectomy."

Every now and then, there is a news headline about a breakthrough in developing a male contraceptive pill. To date however, there is no product ready to hit the market and researchers are still struggling to create a pill for men.

Why is it so difficult to create a male contraceptive pill?

Men produce millions of sperm during the course of one day, all of which have to be stopped to achieve effective contraception. This makes male contraception more difficult than in female contraception, as women only produce one fertile egg at a time. Another difficulty with the pill for men lies in the delicate balance between stopping sperm while keeping sexual function intact and avoiding low libido.

In principle, this could be achieved by blocking the action of the hormone testosterone so that the testicles no longer produce any sperm. Studies on the active ingredient progesterone (which is used in many contraceptive pills for women) found that a progestogen pill for men could indeed work but different men react differently to the pill. During trials, researchers observed that some men still produced a reduced number of sperm, which means that they could still make a women pregnant.

Pill or injection instead of vasectomy?

An Australian team of scientists took an entirely different approach to solving the conundrum of the male contraceptive pill. They developed a pill which does not contain any hormones but which stops the release of sperm. Similar to a temporary vasectomy, the new pill blocks two proteins which are involved in the process of ejaculation. It does not stop the production of sperm, it just stops sperm from coming out. However, this mechanism has so far only been tested on mice and it is not known whether it will work in humans.

A similar technique is currently being trialled in India. It involves an injection in the scrotum, which practically works like a reversible vasectomy. The initial injection can be reversed with another injection at later date. Current trials with human volunteers seem promising but it may still be years before the injection can be produced and made available to the public.

Which methods are available today?

For the time being, there are only two methods of contraception men can use: The male condom and vasectomy. While a surgical vasectomy is permanent, the condom is easy to use, very effective and it also protects you from sexually transmitted diseases.