It takes a very short amount of time for a stranger to form an opinion of you. The persona you project and the way people feel about and towards you can be affected by the clothes you wear, the way you look, and the things you say.

Your sexuality is no different.

We studied the way over 1,000 Europeans and Americans reacted to male and female models based on their number of sexual partners. With just that, we were able to discern how trustworthy, honest, intelligent, kind, and attractive they believed a person to be. Curious how your sexual inhibitions could affect your image? Continue reading to learn more. 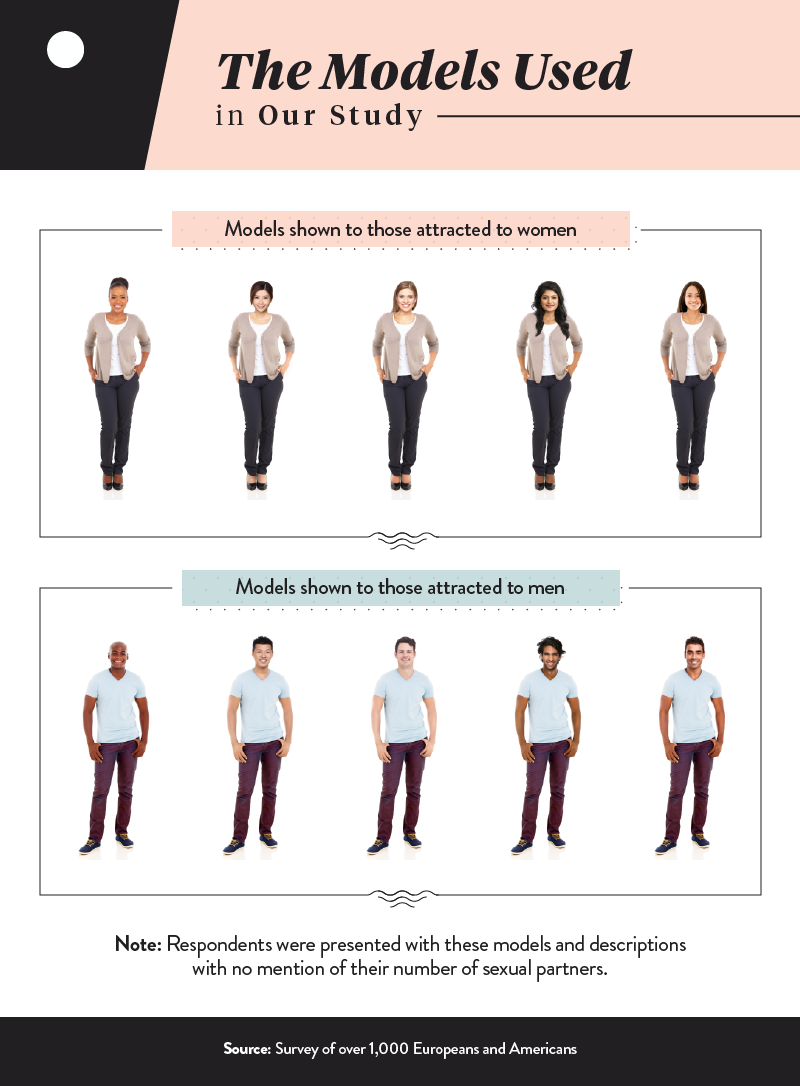 To gauge participants’ perceptions, we showed them one of five models based on their sexual preferences. Both the male and female model were shown with the same physical build, but as different races and with different sexual histories.

All of the personal information we revealed about the models stayed consistent in each survey group. We then tasked men and women with judging their assigned model in terms of various character traits including their confidence, sexual inhibition, attractiveness, intelligence, and more. This served as our control factor throughout the study. 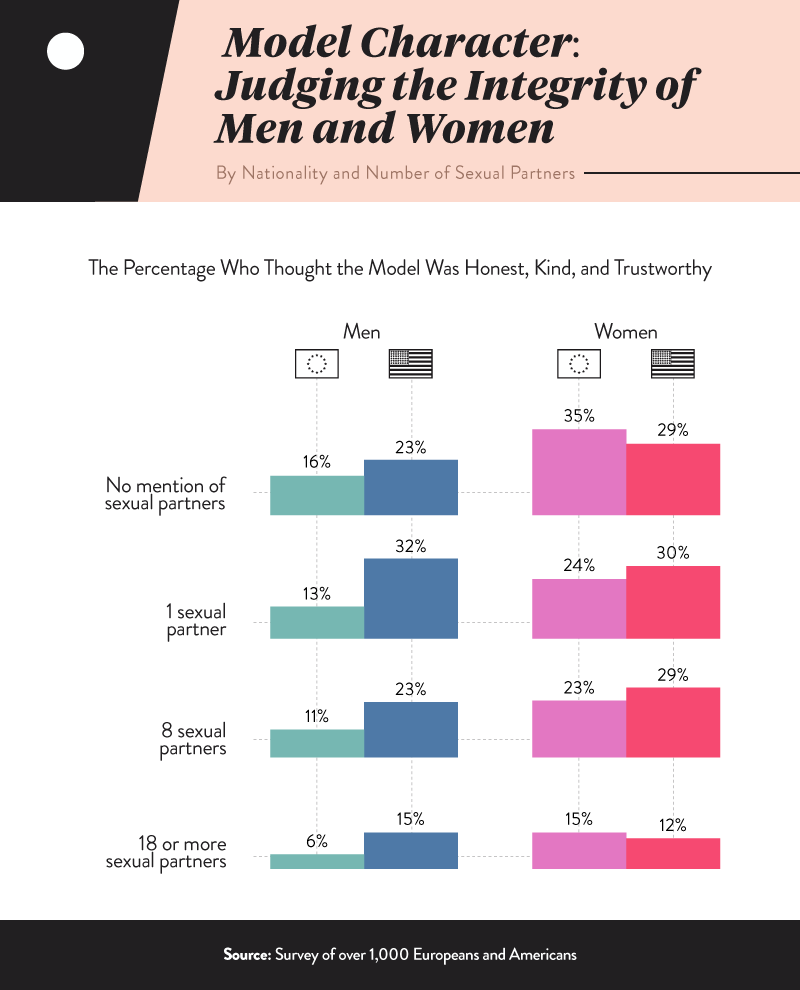 Across the world, our perceptions of sex and sexual morality are changing. The number of people who have a positive attitude towards once-scorned relations, like sex before marriage among adults or even same-sex relationships, has grown considerably over the last several decades.

We found perceptions of men and women with no mention of their sexual partners yielded reasonable assumptions of their character – which included honesty, trustworthiness, and kindness. However, the percentage of respondents who viewed the models as possessing positive qualities tapered off to varying degrees as multiple sexual partners were introduced to the mix.

There are interesting parallels when comparing how people viewed European men versus women. While European women’s integrity took its biggest plunge with the introduction of just one sexual partner – an 11 per cent drop – men experienced just a 3 percent decrease.

Our study shows that our respondents had stronger opinions on women’s integrity than men’s when it came to judging their character on their number of sexual partners. European women experienced the biggest drop in percentage, followed by American women.

The Sexiness of Sexual History 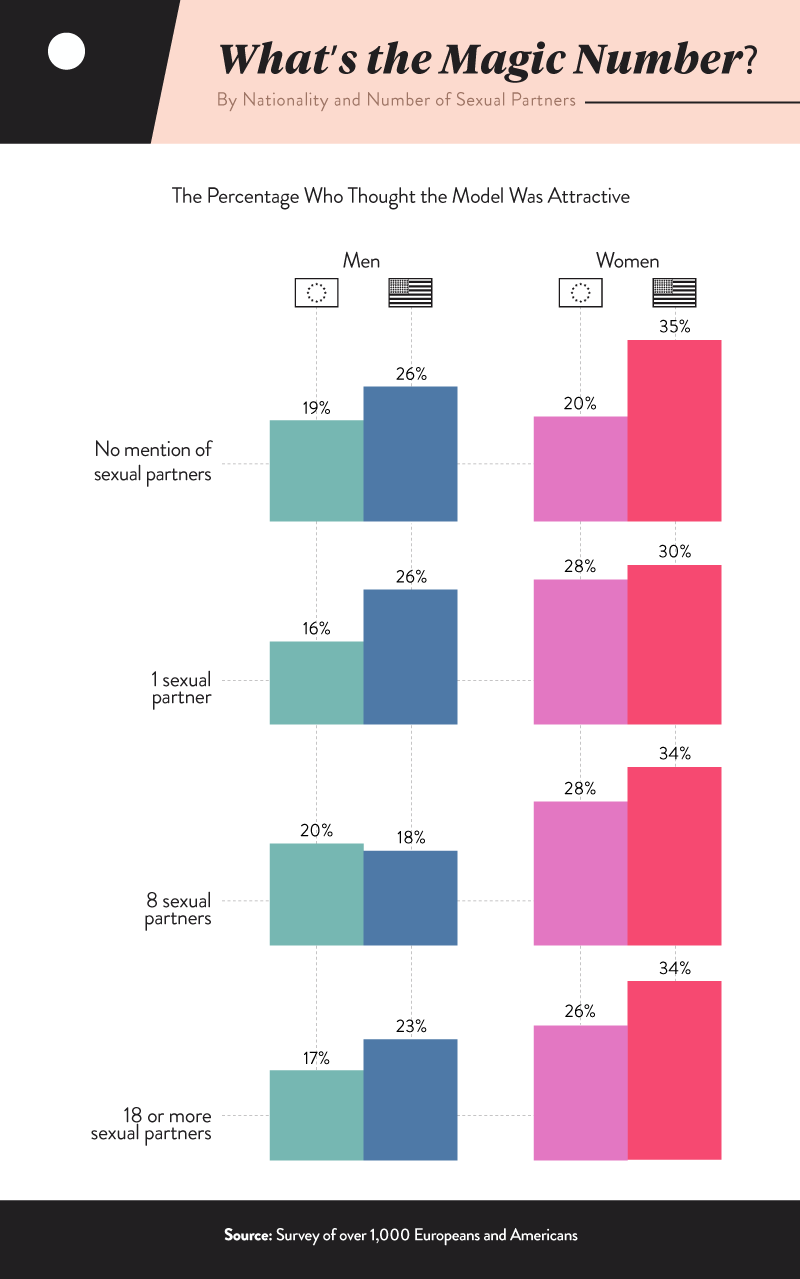 It’s interesting to note there are no wild fluctuations in perceived attractiveness as the number of partners increase, save for a couple of exceptions: The negative difference between American men with one partner versus eights partners is eight percentage points, while European women with no assigned number of sexual partners was only found attractive by 20 percent of respondents, versus the 28 percent of respondents who weighed in on the model’s attractiveness at 1 and 8 partners.

In all but one comparison, respondents viewed American models as more attractive than their European doubles. The only outlier was in the category of men with a history of eight partners, in which Americans come in as marginally less attractive at 18 percent versus 20 percent in favour of Europeans. American women come out on top in this category: While they were judged the harshest for their sexual pasts, as seen in the previous asset, they were still respectable leagues above their male and female peers no matter how many partners they’d had.

The general rule here seems to be women garnered more attractiveness points than men, while Americans beat out Europeans in their respective genders. That being said, according to a British study published in the Journal of Sex Research, “women were completely put off by men who had logged more than six partners,” while men only started to show concern when their peers’ numbers reached more than 11.

A cursory definition search tells us more than meets the eye about promiscuity. The word “promiscuous”  is an adjective that can describe an individual as “having sexual relations with a number of partners on a casual basis.” There are also other associations with the word, such as “careless” and “haphazard” that would suggest the word could be an insult or slight.

As evidenced by this graph, different groups of people wear these two definitions in a very divisive way. European women represented the only demographic that was perceived as promiscuous simply for existing, with no mention of their sexual past. In fact, this double standard is so prevalent that a judge has even alluded to a certain degree of blame for women who are victims of sexual assault simply because they’d been drinking – how very promiscuous of them.

European women still topped the charts for single-partner perceptions, albeit at a lower percentage than when no data was provided. Meanwhile, the addition of a partner decreased the perception of a European man’s promiscuity by nearly half. American women experienced a nearly-imperceptible 2 per cent hike in perceived promiscuity, however American women experienced the largest incremental jump on the entire graph from 5 percent of respondents believing the American model to be promiscuous with no mention of sexual partners to to 45 percent of respondents believing her to be promiscuous at 18 or more partners. 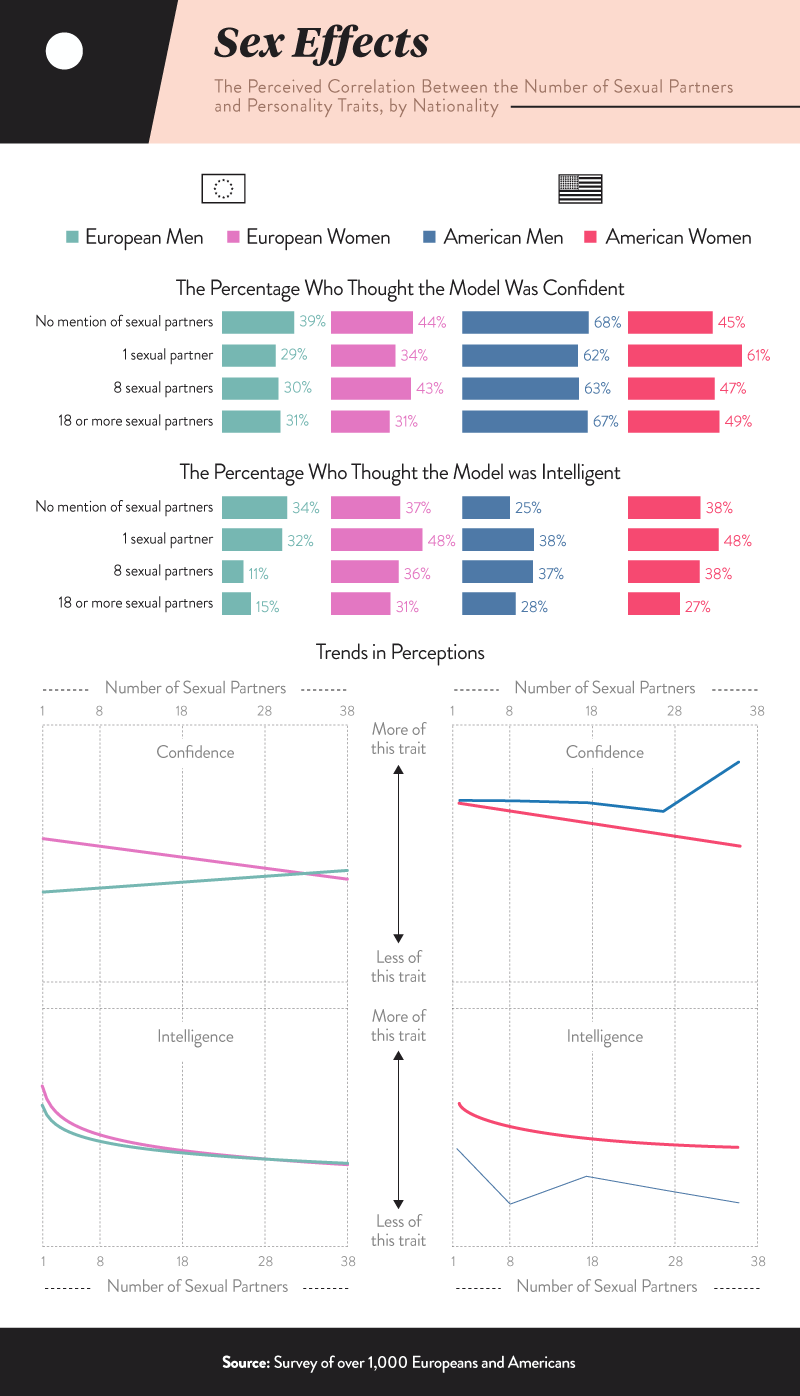 Right off the bat, American men were perceived as far more confident than their peers when no additional information was provided. At 68 percent, they cast a shadow over American women and both European genders, which hovered between 39 and 45 percent. Once one sexual partner was added to the mix, however, the only demographic that was perceived as more confident was American women, with a significant 16 percentage point jump. Europeans slipped by 10 percentage points each, with American men at a six percentage point deficit.

The second bar graph was a bit more forgiving, with everyone except European men enjoying an increase in perceived intelligence with the addition of one sexual partner. However, by the time everyone reached 18 sexual partners or more, American women’s intelligence factor plummeted by 21 percentage points compared to single partnerhood, with European men suffering greatly with the lowest perceived intelligence of the bunch. American men – regardless of the fact that they began with the lowest intelligence quotient of the group – were the only ones that finished off with a higher percentage than when they started: a modest bump from 25 percent to 28 percent.

The line graphs further illustrate American men as statistical outliers. While the other three demographics followed certain trends (everyone’s intelligence decreased as the number of partners went up; women’s perceived confidence went down as sexual partners increased, while men’s went up), statistical testing showed that perceptions of American men only somewhat adhered to these tendencies. European males’ confidence increased slightly as their number of partners increased; however, their American peers’ line spiked aggressively just before 28 partners. This group’s line was similarly erratic in the intelligence graph: With the three other demographic groups experiencing nearly identical declines, the perception of American men varied wildly. It can be assumed, then, that the way people perceive American men is far less dependent on their number of sexual partners versus other demographics.

Your Best Self Today

The image of people with less sexual inhibitions has evolved in recent years. The older perception that people more in tune with their sexuality have fewer friends and are less interested in serious, long-term relationships has been debunked, and research points to a potential genetic predisposition that may account for some people’s more robust sexual histories.

At Superdrug Online Doctor, we provide sexual health products and services without any stigma attached. From STI testing kits and medications to contraception, we have everything you need to feel confident and empowered when it comes to your sexuality. Visit us at https://onlinedoctor.superdrug.com/ to learn more.

We surveyed 1,146 Europeans and Americans for this study, which includes 275 European women, 342 European men, 233 American women, 294 American men, and 2 participants who identified themselves by another gender. The average age of our participants was around 35 years old, with a standard deviation of 10.55 years. Participants were presented with models, based on their sexual orientation, and were asked to rate their character traits on a scale of one to seven. This was based on a control: a model presented with no mention of sexual partners. We then asked participants to rate character traits depending on the number of sexual partners ranging from 1 to 38. We asked participants to answer questions on perceptions of honesty, sexual inhibition, trustworthiness, intelligence, confidence and kindness, as well as basic demographic questions.

We did not include an attention check question in this survey, so it is possible our results are skewed by respondents who did not take the survey seriously.

We did not have a validated measure of character traits available to us. Character traits we measured for included the following: confidence, attractiveness, kindness, intelligence, trustworthiness, honesty, and promiscuity. We created one on our own that used a seven-point scale, and asked respondents to rate the models in our photos on a scale of 1 through 7, with 1 being “not having a lot of this trait at all” and 7 being “having a great deal of this trait.”

Although we observed a significant effect on respondents’ perceptions of our model’s intelligence and confidence based on the model’s presented number of sexual partners, we did not find that same significance in trends concerning American men, where there may be other variables involved.

Do you think a number is just a number? Share our findings with your lovers or friends for noncommercial purposes only. Just don’t forget to link back to us to give credit where it’s due! For any questions regarding this project, please email us at [email protected].