Sexual education in schools often doesn’t cover everything people need to know about sex. In some places, it’s not even mandatory for schools to include sex education in the curriculum. Even when it is, much of the material revolves around STI prevention or the medical understanding of sex. Enjoyment, adventure, and experience can often be left out of the discussion. The lack of conversation around sex may be a large contributing factor to why there can be hesitation around trying new things or considering certain approaches in the bedroom.

To learn more and to provide some education, we surveyed people from Europe and the U.S. who are currently in a relationship to see what types of things are creating anxiety in the bedroom. Respondents shared some intimate details about their sex lives and the specific sex acts, toys, and scenarios that have made them uncomfortable. What’s more, we were able to compare some statistics to the same data from 2017 to see how attitudes and anxieties are evolving. Keep scrolling to see what people shared. 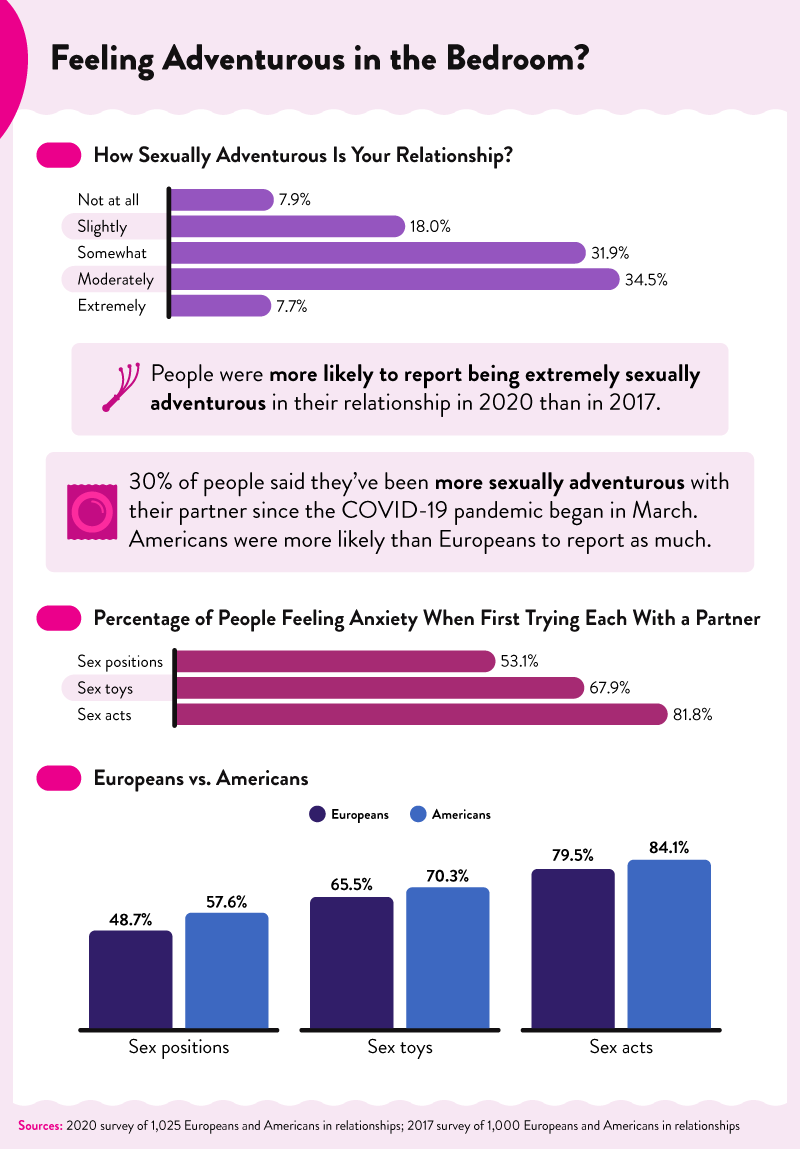 Most people landed somewhere in the sweet spot between slightly and moderately adventurous. Particularly since the COVID-19 pandemic, however, couples have been more willing to step out of their comfort zone, with 30% saying they have been more adventurous since the pandemic began. Specific parts of that adventure, however, caused more anxiety than others.

Sex acts (e.g., BDSM, role-play) were the most intimidating category. 82% felt at least some apprehension when it came to trying a sex act for the first time. It should be known that comfort is key for enjoyable sex. Anxiety, specifically, can affect not only the quality of sex but even the quality of life. Feeling comfortable (even when you’re trying something new) also makes orgasms more likely. Americans were less likely than Europeans to reach this comfort level when trying sex positions, sex acts, and sex toys for the first time. Perhaps it’s the more widespread sexual education in Europe that helps them become more comfortable. 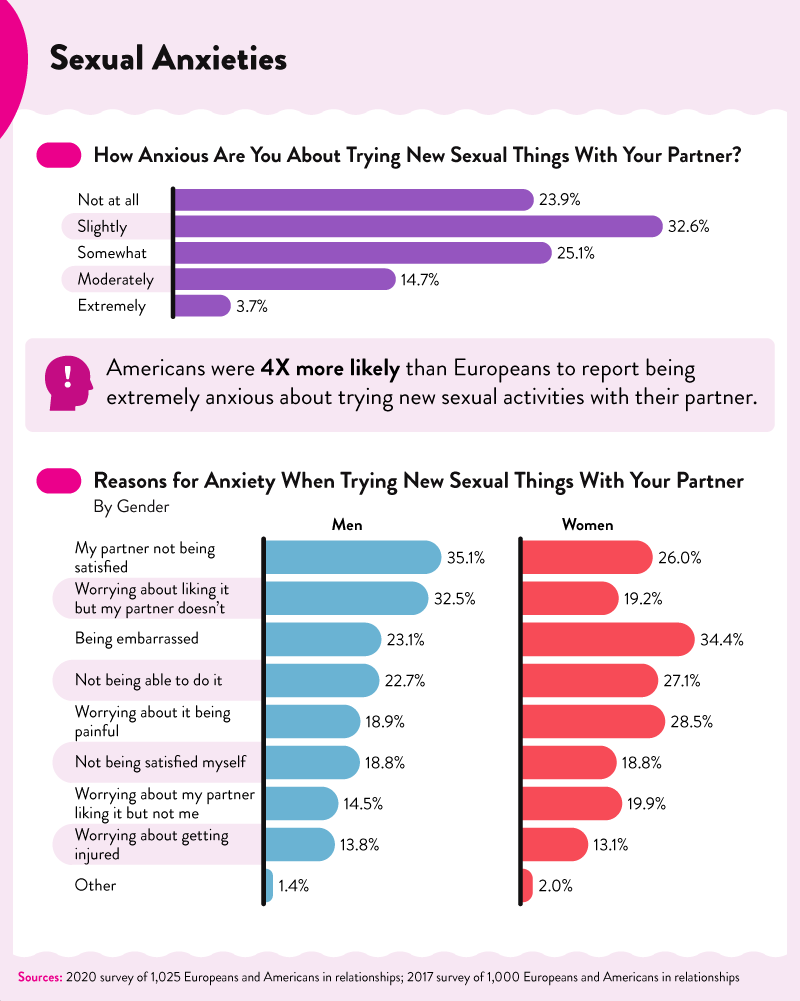 Americans were once again four times more likely than Europeans to experience extreme anxiety trying new sexual activities with their partners. According to UNESCO, sexual education can help with some of these issues, as Europe is also proving. They report sexual education as having positive effects, including improving attitudes related to sexual behaviours. This may be why anxiety is popping up only one-fourth as often in Europe than it is in the U.S.

Next, we asked participants to try and explain exactly why they were having anxieties in the bedroom. This time, however, we compared by gender. Men were particularly concerned with their partner’s enjoyment, as opposed to their own. 35% were worried that their partner wouldn’t like it if they tried something new, and another 32.5% were worried that they themselves would like it even if their partner didn’t. Women, on the other hand, were most nervous about embarrassment (34.4%) and pain (28.5%). 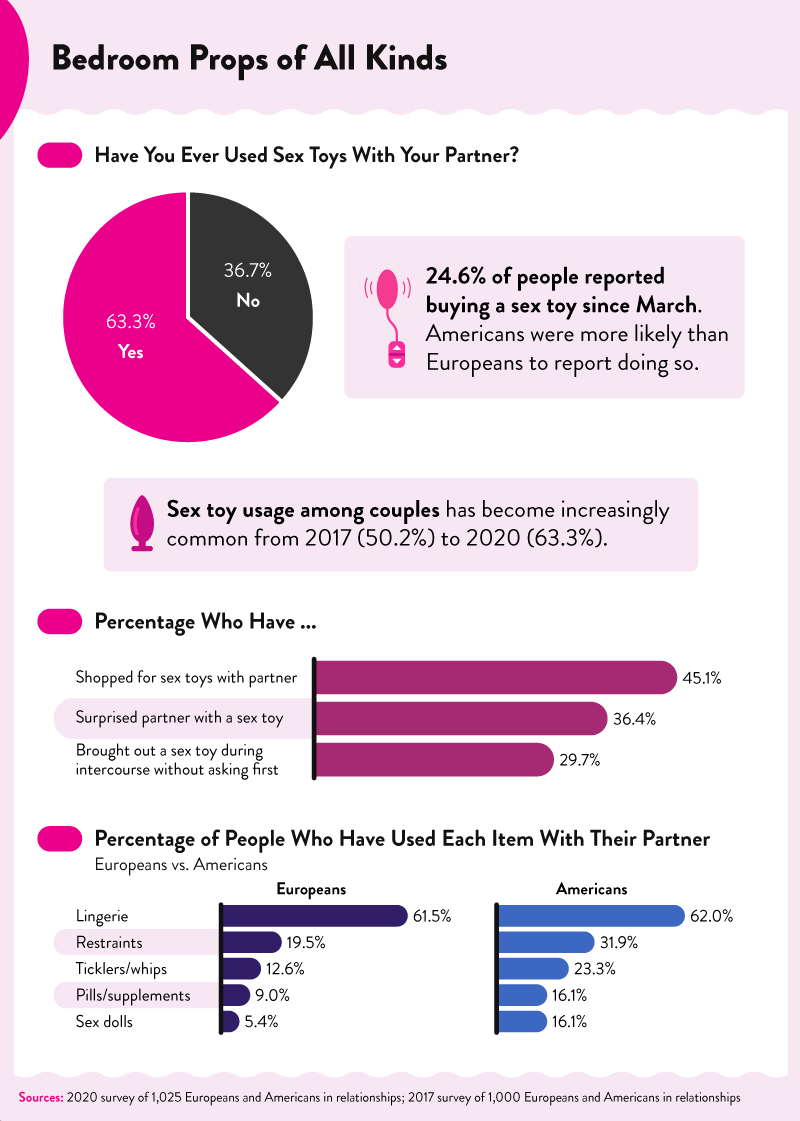 Sex toys are one of the first things recommended when exploring new things in the bedroom. Most people (63.3%) had given them a try with their partner already, though this has increased in recent years. We asked the same question of people in 2017 and found that only 50.2% of people had tried sex toys with their partner. The pandemic might have also inspired people to try toys while quarantined with their significant other: 24.6% of respondents said they’d bought a sex toy since March. 45% of partners had shopped for a toy together before, which can both be a turn-on as well as a great way to make sure you’re choosing something you would both enjoy. 36% said they’d surprised their partner with a toy. 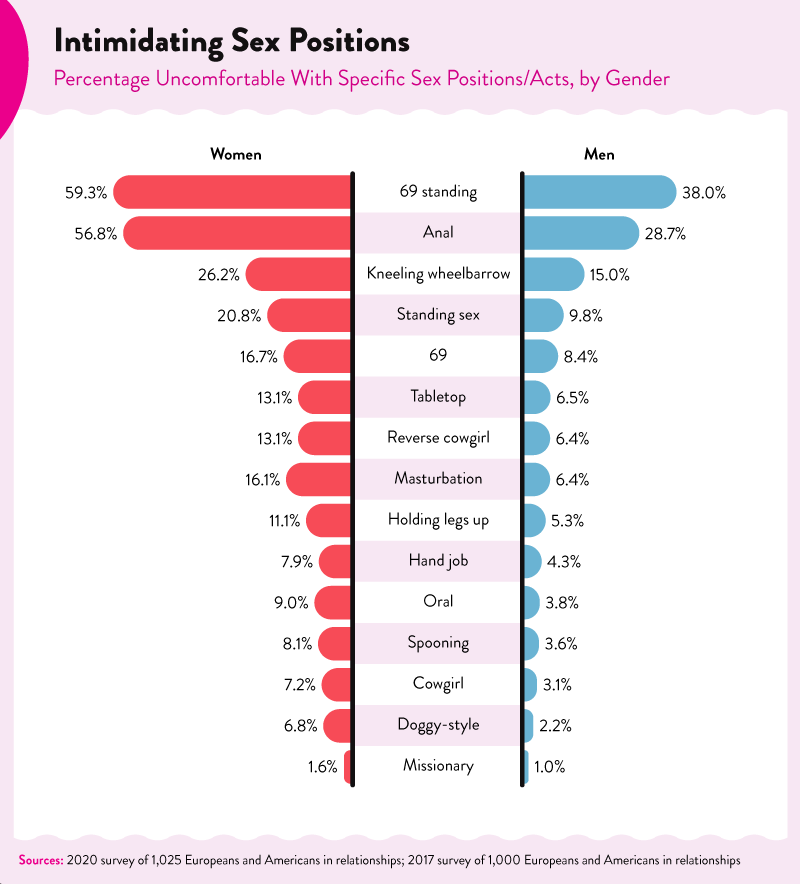 When we asked about trying different sex positions – we covered everything from missionary to 69 standing up – women were more likely than men to report being uncomfortable with various positions. Historically, the societal narrative around women and their sexuality is that they are less interested in sex than men, but new research and progressive opinions on female sexuality have helped combat this myth. It’s possible that the outdated messages about what women want in bed could be impacting how they perceive sexual acts and positions. 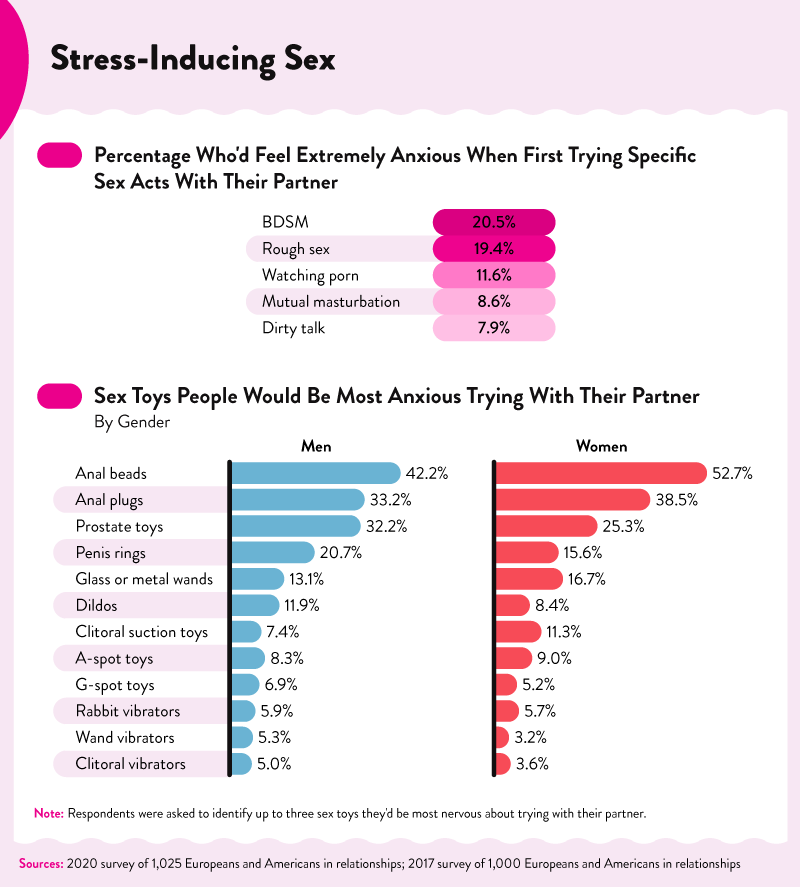 Thanks to respondent openness and honesty, we now know just how common anxiety around sex positions, sex acts, and sex toys really can be. The differences between Europeans and Americans again reinforced the importance of sexual education. If you can learn to relax some of the stigma and uncertainty around new things, you may open up to some new and pleasurable experiences. But as always, honest and respectful communication with a partner is crucial to feeling safe and comfortable with new experiences.

If you are looking for this type of education and enjoyment, Superdrug Online Doctor is here to help. As the experts in sexual openness, our doctors can provide you with the information you need to become your best sexual self. It’s a safe space for any and all sexual orientations and interests, so explore your options online today.

Certain parts of this project make comparisons to a similar study we ran in 2017 of the same population pool (though different respondents). The respondents in the 2017 study were 47.5% men and 52.5% women. Sexual orientation data were not collected in the 2017 study.

When asked to rate their anxiety on a number of variables in the survey, respondents were given the following scale of options:

When rating their comfort with trying various sex positions with their partner, people were given the following scale of answer options:

In our final visualisation of the data, the percentages shown represent the number of people who said they were not at all comfortable with each position.

When asked about what types of sex toys people would be most anxious about trying with their partner, respondents were instructed to select up to three options that would make them most anxious.