Humans haven’t always lived like us – they didn’t always pay rent, for example, let alone drive cars or even brush their teeth. But since the very beginning of our species, humans have been having sex.

In modern times, research suggests the average American adult does so around 54 times a year, which is just about once a week and and average of 7 partners in their lifetime, not only for Americans but Europeans as well.  A lot has changed since we were cave dwellers, though, so where does the average couple stand on their sex life today? We asked 1,018 people in a relationship how long they’re having sex for, whether it’s any good, and what they need for it to be even better. Continue reading to see what we learned. 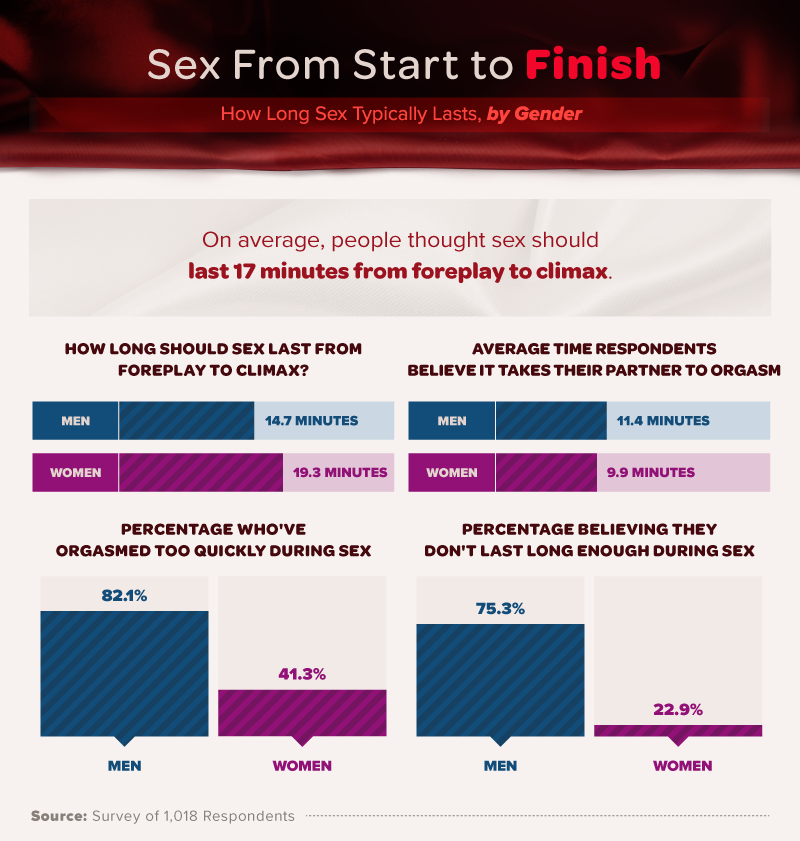 When most people imagine sex, they likely envision it lasting a long time. Another survey from 2017 found male and female respondents both thought sex should last a little under 26 minutes. However, that’s a far cry from what we see in our survey data. We asked respondents in a relationship how long it takes them to orgasm and how long they think it takes their partner, plus how long they wished sex would last. On average, men said they wanted sex to last 14.7 minutes from foreplay to climax, whereas women wanted it to last a bit longer – 19.3 minutes. However, both genders said their partner typically took less time to orgasm. 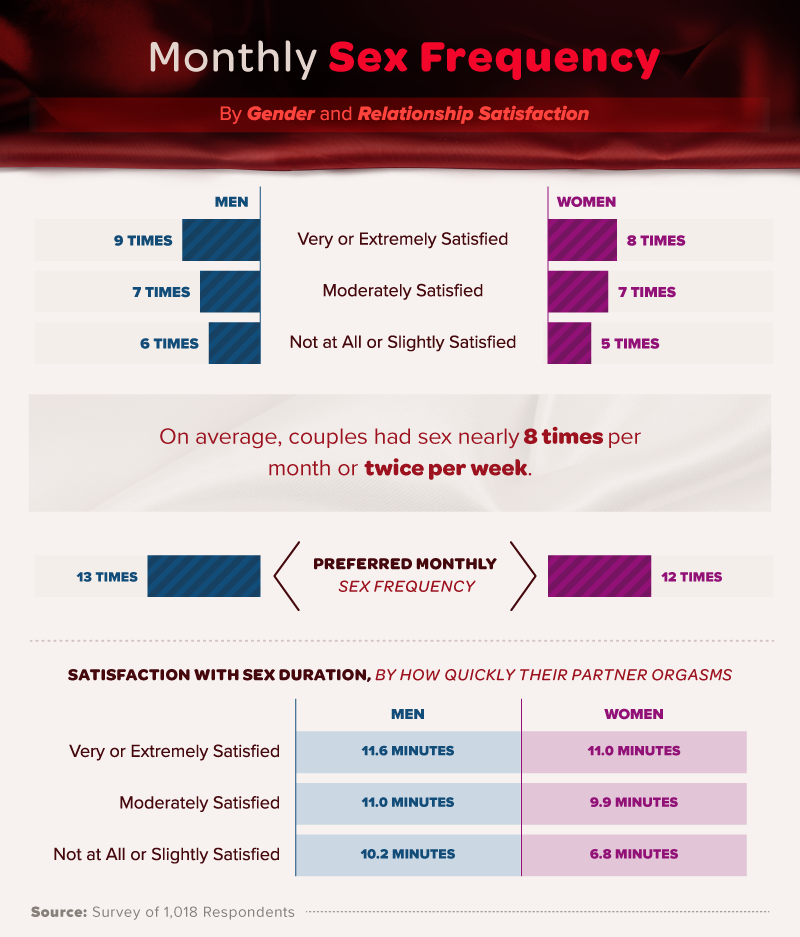 Many individuals may find sex to be a key ingredient in their relationship. We wanted to know how often couples had sex – and whether it’s related to how satisfied they are with their relationship. Based on our survey, couples who had sex only five times a month were not as satisfied with their current relationship. Nevertheless, there’s good news: The average couple had sex nearly eight times per month, which tended to leave most respondents teetering between “moderately satisfied” and “extremely satisfied.” However, female partner orgasm time doesn't vary much compared to level of satisfaction, but shorted male orgasm is correlated with lower satisfaction.

Stress may play a pivotal factor in sex duration, but it can also be a determining factor of how frequently couples have sex. Considering a growing number of researchers believe regular, satisfying sexual encounters can be good for managing stress, fighting off (non-sexually transmitted) illnesses, and mental health, it’s certainly important to see where people stand – and whether they’re happy with what’s happening in their bedroom. 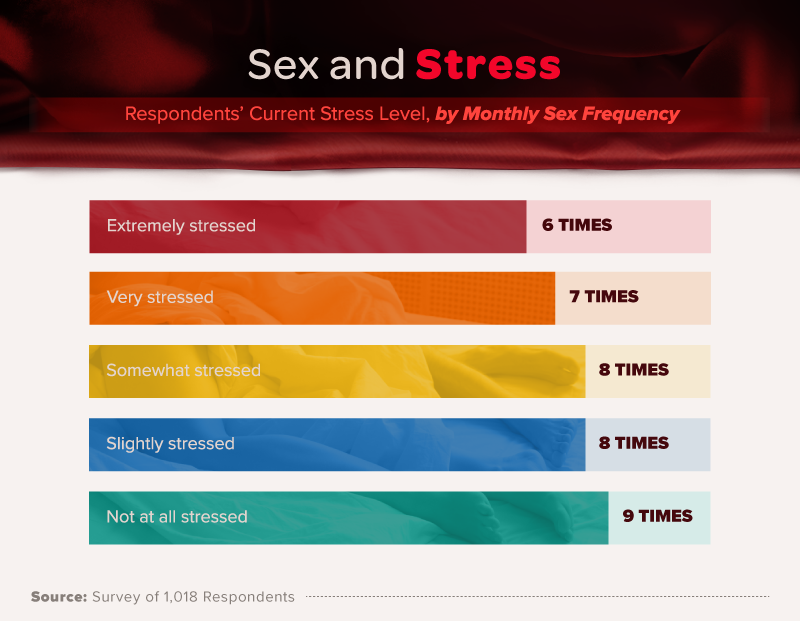 Research suggests that good sex can be very effective in dealing with stress. Orgasms trigger the release of oxytocin, which is thought to relieve stress, and this can, in turn, improve our mood well after the act is over.

Given this important benefit, we asked survey participants in a relationship about their current stress level and how much sex they had each month. Interestingly, our data may reveal a vicious cycle: Higher stress levels may be linked to less sexual activity. Individuals who said they were “not at all stressed” reported having sex an average of nine times per month, which is 50 percent more sex than those who said they were “extremely stressed.” 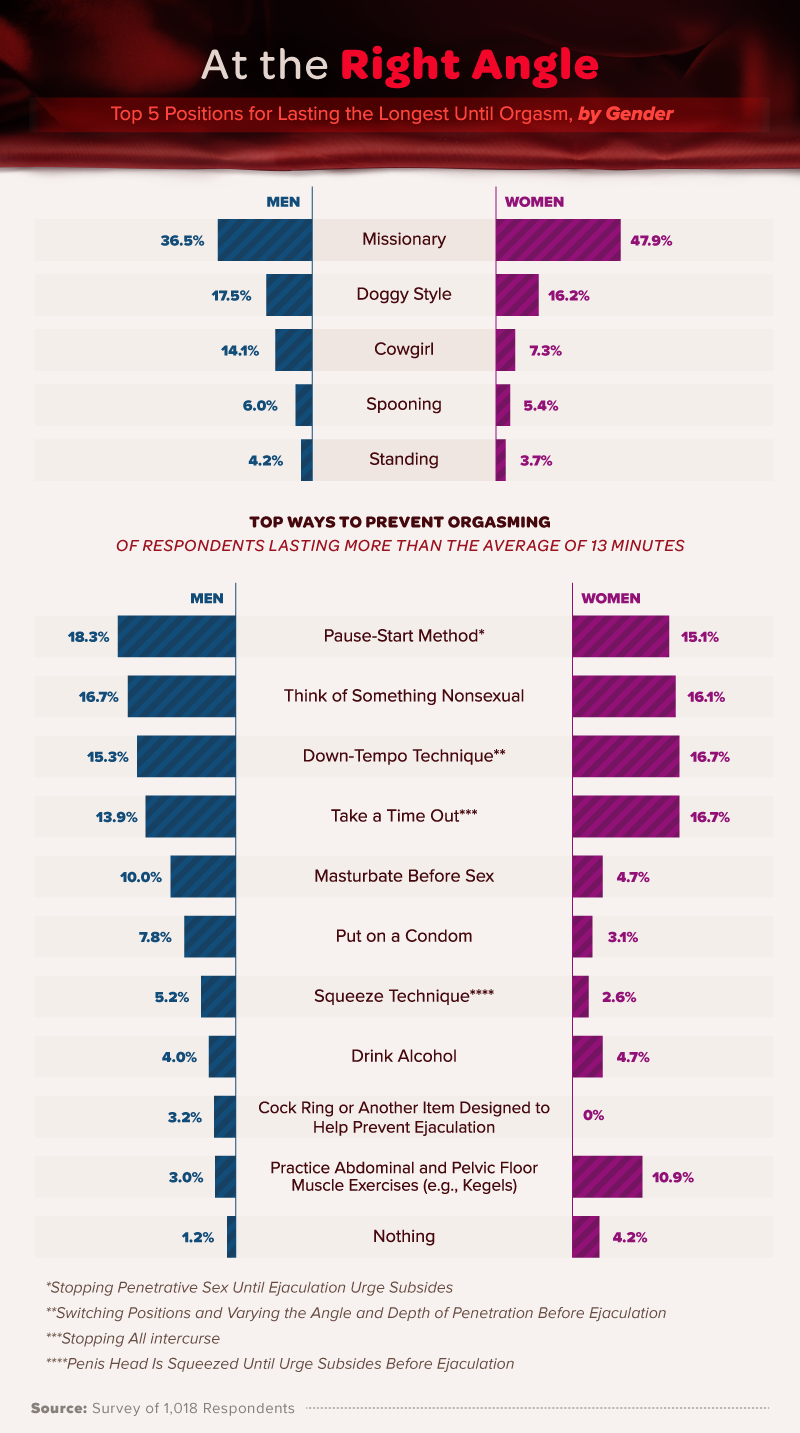 A lot of factors might add up to good sex in a relationship, but what do men and women rely on to make sexual encounters last longer? We asked 1,018 men and women about the positions that helped them last the longest before orgasm. Couples, take note – this could help you have a more satisfying night. 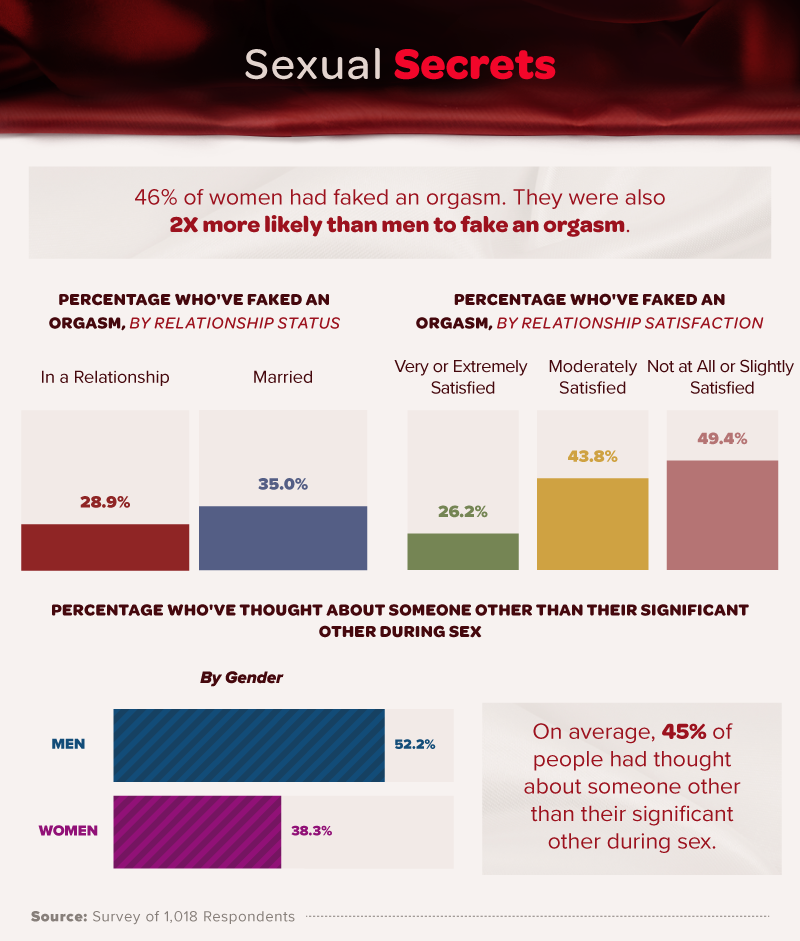 There’s no better way to get answers to hot-button sex questions than anonymity. We asked survey participants about two big sexual secrets: faking orgasms and imagining someone other than their partner during sex. The results suggest women were two times more likely than men to fake an orgasm, and married respondents were more likely (35 percent) to fake an orgasm compared to those in a relationship. More than half of men, however, said they imagined someone other than their partner during intercourse, while 38.3 percent of women said the same. 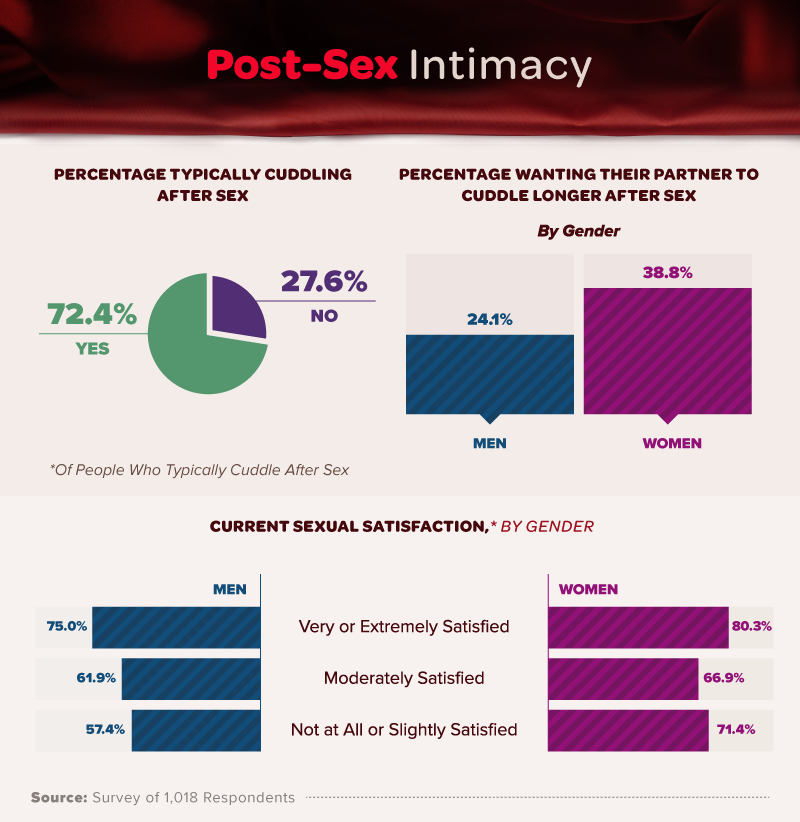 Let’s say sex is over. Many may be wondering: Now what? Well, our survey data suggest you might want to stick around. Nearly 39 percent of women said they want to cuddle longer with their partner after sex, compared to 24.1 percent of men.

75 percent of men and 80.3 percent of women who typically cuddled after sex were “very or extremely satisfied” with their intimacy, if that’s any indication of what should happen after partners reach their climax. Overall cuddling after sex correlates with relationship satisfaction for men, but not for women. Thankfully, most people seem to have a clue – around 72 percent of those surveyed said they typically cuddle after sex.

Intimacy of any kind is certainly important for romantic relationships, and most of us in one would benefit from learning more about what our partner really wants. We heard from more than 1,000 people from all walks of life about what’s happening in their bedroom and what they wish would happen. In the end, they shared their best positions, their ideal length of sex, what works for lasting longer, and more.

This information is, no doubt, important in a time when people – particularly young people – are experiencing a “sex recession.” But that’s just the start of what it takes to be healthy and happy in life. The next time you have any questions related to sexual health or intimacy, visit Superdrug Online Doctor to get your answers.

There were 1,473 respondents from Amazon’s Mechanical Turk. However, 458 did not meet the qualifications to participate in this study, leaving 1,015 able participants. The respondents who were excluded stated they currently are not in a relationship. Also, any outliers have been excluded from our data. From the able respondents, 51 percent were women, and 49 percent were men. Our respondents ranged in age from 18 to 71 with a mean of 35 and a standard deviation of 11.

The data we are presenting rely on self-reporting. There are many issues with self-reported data. These issues include but are not limited to selective memory, telescoping, attribution, and exaggeration, especially when talking about sensitive topics such as sex performance. As a result, the outliers in this study have been excluded and are not presented in the data.

The next time you and your significant other are about to engage in intercourse, remember these findings because they may help you out. If you want to share our findings for noncommercial purposes, please do – but don’t forget to link back here to provide our team credit for their work.