How reliable is the pill and how do I need to take it?

How reliable is the pill and how do I need to take it? 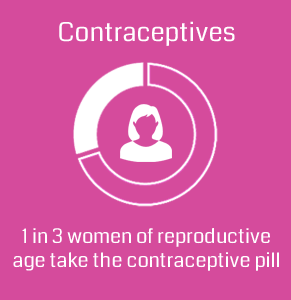 "The pill is one of the most effective contraceptives, as long as you take it correctly. "

Several million women in the UK rely on the contraceptive pill to prevent unwanted pregnancies. The pill is very convenient - but just how effective is it? Can you still get pregnant on the pill? What can you do to make sure the pill works? We answer your most pressing questions so you can use the pill with confidence.

Can you still get pregnant on the pill?

Without contraception, most women who are sexually active on a regular basis get pregnant within one year. Your chances of getting pregnant depend on the time of your cycle. On your most fertile days, your risk of getting pregnant after having sex once is up to 25%. During other times of the cycle it can be very low.

The contraceptive pill contains hormones, which act on your body in three ways. The pill thickens the mucus at the entrance to the womb, with the result that sperm can’t enter the womb. It also changes the lining of your womb, which makes it difficult for a fertilised egg to implant. With the exception of some minipills, contraceptive pills also stop ovulation, which means that you won’t be releasing any fertile eggs.

Clinical trials have shown that out of 100 women who take the pill for one year, less than one will get pregnant. The pill is over 99% effective, which makes it slightly safer than the condom (98% effective). When the pill fails, it is usually because of a missed dose or other mishap.


How do I have to take the pill?

Always read the patient information leaflet that comes with your pill and make sure you understand the instructions. Missing a dose or taking it late reduces the effectiveness and leaves you at risk of getting pregnant. It is essential that you take the pill regularly. If you don’t have time to see your GP for a prescription, you can order it online - our online doctor service allows you to order the pill online and have it delivered.

There are some other factors you need to watch out for when you are on the pill. Certain illnesses and other medications can make the pill less effective.

What can reduce effectiveness?

Medications - Some medications, for example some antibiotics, can render the pill ineffective. If you are taking any other medication you should always check whether they affect the contraceptive pill.

Vomiting and diarrhoea - If you vomit after taking the pill or have severe diarrhoea, the pill might not work. If this happens to you, read the patient leaflet and follow the instructions on what to do.

It is always better to be safe than sorry - if you are unsure whether the pill has worked you should use a condom in addition to the pill, for at least seven days. If you think that you have not been protected during intercourse in the past 5 days, you may be able to take the morning after pill to prevent getting pregnant.

Antibiotics and the pill

Some antibiotics can make the contraceptive pill less effective. It used to be assumed that many antibiotics interacted with the pill and that they could stop it from working.
However, recent research has shown that the only antibiotics which actually reduce your contraceptive protection are rifampicin and rifabutin. They affect the way your body processes the drug and they can reduce the level of the medicine in your bloodstream.
If you are taking either of these antibiotics, you need to use additional contraception, for example a condom or a diaphragm. You should take this precaution while taking the medication and for seven days after you have taken the last tablet of your antibiotic.