How is HIV transmitted?

How is HIV transmitted? 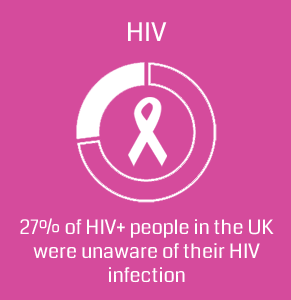 "HIV is transmitted during sex. Condoms are very effective in preventing HIV transmission and you should use a condom every time you have sex with a partner whose status you don't know."

Everyone knows that HIV is transmitted during sex. When it comes to different ways of catching the virus, things get a little more complicated. Can you catch HIV during oral sex? Can you catch it from kissing? We answer all your questions about the virus and its transmission.

How can you catch HIV?

You can catch HIV when another person’s bodily fluids come in contact with your mucus membranes or damaged skin. The HIV virus is only present in a sufficient concentration in the following bodily fluids:


The virus has to enter your bloodstream via your mucus membranes (in your mouth or genital area) or broken skin - you do not catch it from contact with intact skin.

HIV is usually transmitted via:


Which kinds of sexual contact can put me at risk?

Condoms are a great contraceptive which protects against sexually transmitted diseases and HIV. You can catch it if you have sex without a condom, if you have:

Can you catch HIV from kissing?

Kissing with closed lips is considered safe. It is generally highly unlikely that you would catch HIV from kissing, but in theory, the virus could be transmitted during French kissing (if the infected partner has a wound or inflammation in their mouth).

What about blood transfusions?

What can I do to stay safe?

Many STIs increase your risk of catching HIV, so you should make sure you find out whether you have Chlamydia, gonorrhea or any other STI.

You can get tested for HIV with a home HIV test kit, or by visiting a nurse for an instant HIV test.

Myth: You can catch HIV from touching someone who has it.

Reality: You don’t get HIV from hugging or touching someone who is infected - neither do you get it from any other casual contact. The most common causes of HIV transmission are through sexual contact or when using contaminated needles.

Reality: In 2012, 48% of patients who received HIV treatment were heterosexual - you can catch HIV through unprotected sex regardless of your sexual orientation.

Myth: You can get HIV from mosquitoes.

Reality: Insects do not transmit HIV, because the virus does not reproduce in insects.

Reality: HIV blood tests are highly accurate. If you think you may have put yourself at risk, you need to get tested straight away. However, it can take several weeks for the virus to become detectable, so you also need to get tested again at least six weeks after you have had unprotected sex to be sure you have an accurate result. If you get tested using a home kit or rapid kit, you should then have “confirmatory tests” (further blood tests) if you get a positive result.

Myth: I would know if me or my partner have HIV.

Reality: HIV can spread so easily because most people don’t have any symptoms. There is no way of telling whether someone has it without taking a blood test - that’s why safe sex is so important.