So, do you want kids? Kind of a weird question to get from someone you don’t know at all, right? As jarring and potentially triggering as it may be, it gets asked all the time in some pretty inappropriate circumstances. Other questions around fertility and conception are posed to men and women across the world by friends, family, co-workers, even managers, and it’s not always well received. Sometimes there is a medical struggle you may not know about, sometimes children aren’t a person’s priority, and sometimes the way people ask is completely insensitive.

With so many people expressing their discomfort, we sought to learn more about why these questions can be upsetting and how people would prefer to be asked. Our hope is that this may present an opportunity to learn how to be better support systems, how to show curiosity more sensitively, and learn from shared experiences across the world. We surveyed 503 people from the UK and 502 people from the U.S., none of whom had any children. By talking to these respondents, we could pinpoint the mistakes and better understand the right and wrong ways to have these discussions. We also learned some of the most common methods people are using when they are deciding to procreate today. If you’d like to educate yourself on the topic, keep scrolling and learn what these people had to share.

First, we wanted to set the stage to show how often people are asked questions about children and how often it makes them uncomfortable. We weren’t lying when we said it happens all the time. Only 17% of respondents without kids said nobody had ever asked them. Instead, 83% were asked at least once a year: See below to understand how this made them feel.

The question “do you want kids?” wasn’t uncomfortable for everyone to answer, but it was for most. Forty-six per cent of respondents overall and 50% of women said they were uncomfortable when someone asked this question. But asking more frequently may be part of the discomfort: People aged 25 to 29 were asked most often about kids and also made the most uncomfortable by it. Likewise, it was more common to ask about children in the U.S., but it also made U.S. respondents more uncomfortable.

It’s unclear why people in the U.K. are asked less often about having children or why they’re more comfortable with answering. After all, the birth rate in England and Wales hit a new record low in 2018, while, in 2017, U.S. birth rates hit their lowest point since 1987 as well. Both of these are attributed at least in part to falling fertility rates, suggesting one obvious medical reason the question may make respondents in both countries uncomfortable. There is some evidence, however, to suggest that talking about reproduction is generally less uncomfortable in the UK: the UK has “the sex talk” earlier in life, while childbearing is also more normalised at work, with parent getting much more maternity and paternity leave than their U.S. counterparts.

The discomfort behind the children questions may stem from who’s asking. The next part of our study gave respondents the chance to explain who has been asking them about having children, as well as how uncomfortable the question made them. As you can see from the graph below, only 8% of people were comfortable being asked by a complete stranger, so best to keep the discussion to people you actually know. 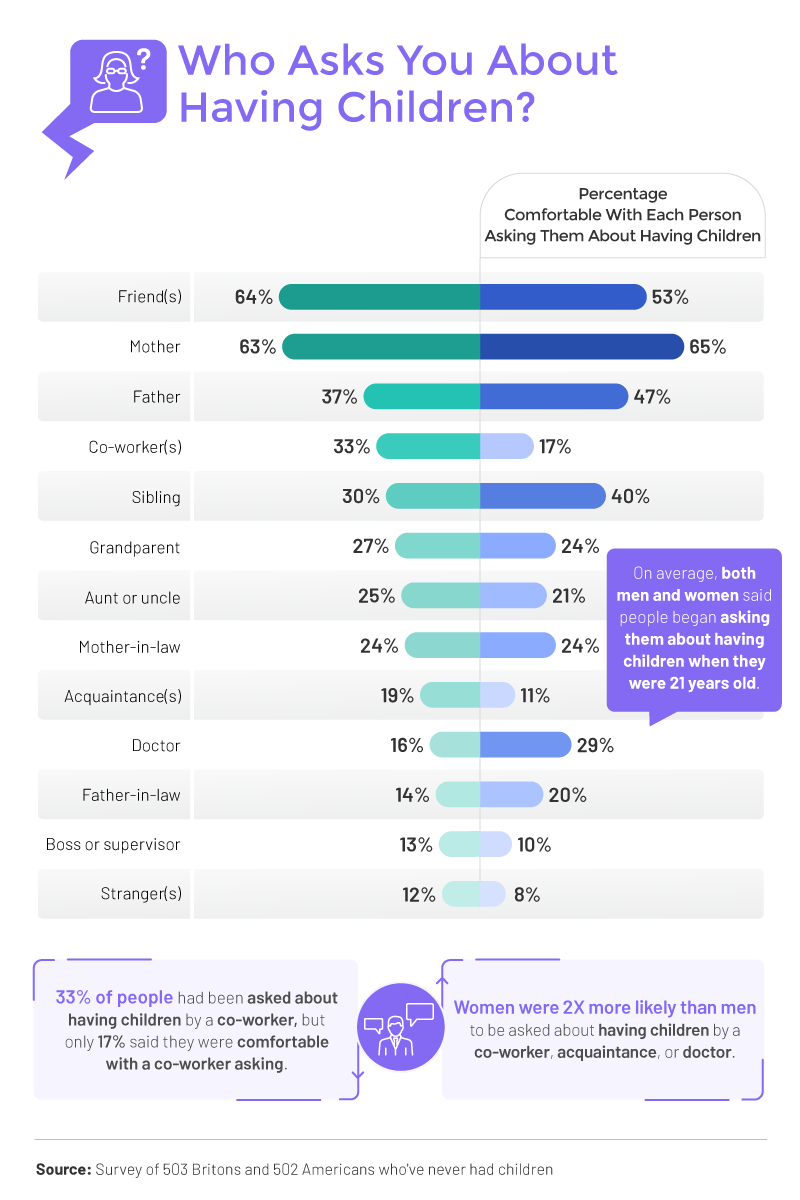 Friends and mothers were asking respondents about having children most often, but it was actually mothers with whom people felt the most comfortable sharing. And even though people also said they would likely feel comfortable talking to their fathers about the topic, only 37% of people said their fathers had asked.

Co-workers were also creating a generally uncomfortable atmosphere and asking too often. Thirty-three per cent had been asked about having children by a co-worker but only 17% felt comfortable with them asking. Although turning co-workers into friends is typically recommended, even for work purposes, the line may have to be drawn when it comes to discussing reproduction, simply because of the discomfort many shared.

We were also surprised to find so few doctors asking questions about childbearing and that so few people would have been comfortable with it anyways. Just 16% said their doctors had asked. This means that being asked by your doctor about children is less common than being asked by your mother-in-law, your grandparents, or even a random acquaintance. Even if doctors had asked more often, only 29% said they would be comfortable with the discussion. That said, women were two times more likely than men to be asked by a co-worker, acquaintance, or doctor.

The next part of our study focused on another question for those without children: Did they feel pressured to have them? Only 13% felt anything from moderate to extreme pressure to conceive. 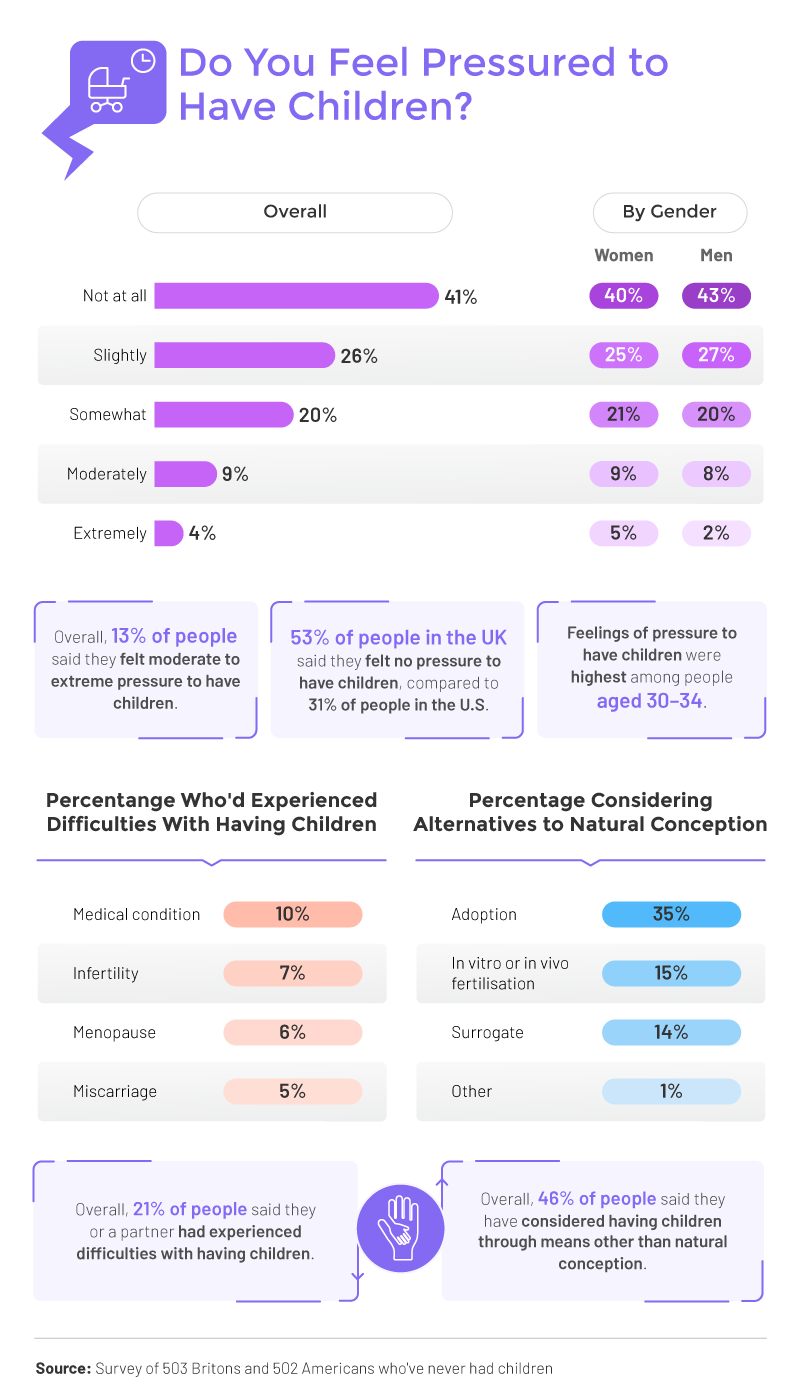 One possible reason for discomfort around the childbearing topic may be an individual’s medical issues. Twenty-one per cent said they or a partner had experienced difficulties with having children already. One in ten said they themselves had tried to conceive but had had difficulties due to a medical condition. Another 7% said they struggled with infertility, while 5% had unfortunately suffered a miscarriage. Considering the profound heartbreak and frustration many families attribute to these medical issues, it’s easy to see why it’s sometimes better to simply not ask. Fortunately, we do have other options to start families today.

Overall, 46% said they considered having children through means other than natural conception. More than one in three in both countries were considering adoption. Bear in mind that the UK currently has 65,000 foster children awaiting adoption, while the U.S. has nearly twice that amount. Some respondents also considered in vitro fertilisation (15%), while others looked into surrogacy (14%). One per cent had tried something aside from these methods.

Overall, 91% of women and 87% of men said they would prefer at least some change in the way people ask them about having children. With this stat in mind, it’s safe to say our culture could use a little further education surrounding the topic, so we asked respondents what it was about the questions that made a person sound offensive or inappropriate. Evidently, not all questions about having children are created equal. 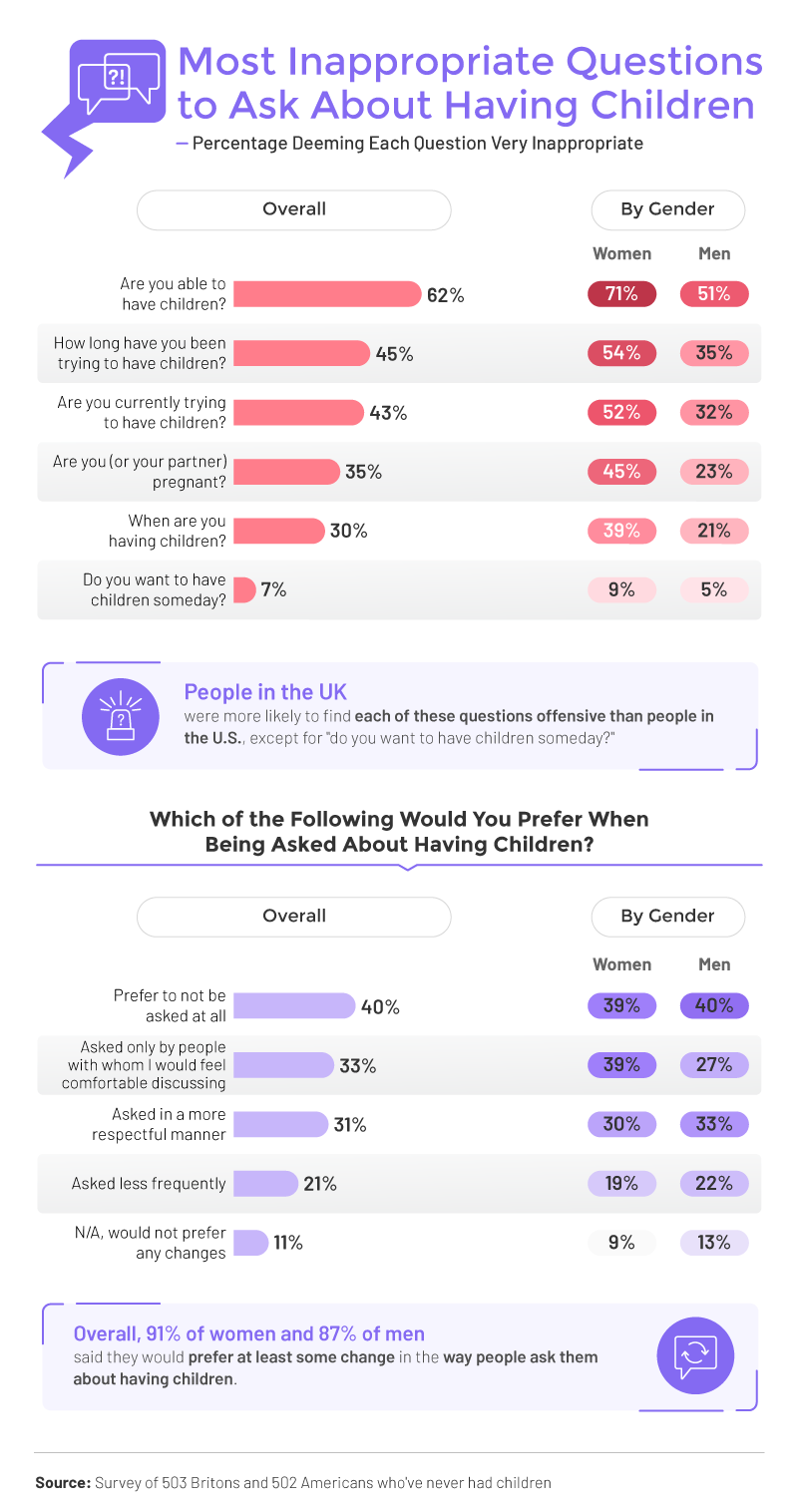 “Are you able to have children?” lands very differently than “do you want to have children?” While the former was considered inappropriate to 62%, the latter bothered just 7%. “Ability” requests private medical information, whereas a “want” talks more hypothetically and offers more sensitivity to a person’s potential struggles. Most of these questions were considered more inappropriate by both Brits and women. Women were particularly bothered by questions about ability to conceive, but they’re also known to disproportionately carry the burden of infertility struggles and may therefore be more sensitive to this issue.

If you want to play it safe, know that most respondents prefer you simply didn’t ask about their conception and childbearing plans at all. That said, there were still plenty of respondents who were comfortable discussing the topic so long as it was approached correctly. Thirty-three per cent said questions about children were fine so long as the person asking is someone they’re personally comfortable with. Women were even more likely to agree with this concept.

Another 31% also agreed that if asked in a more respectful way, questions about children were perfectly OK.

When Do You Want Kids?

Romantic partnerships were often the one place respondents felt the need to both ask and answer the questions about having children, but timing still came into play. Overall, people in both the U.S. and UK believed 10 months into a relationship was the appropriate amount of time to wait to talk about kids, on average.

No matter the age, men tended to want to wait to have a discussion about kids longer than women did. When couples were younger than 25, women wanted to wait 10.4 months to have the talk, while men wanted to wait exactly a year. As they got older, both genders waited less time in the relationship to start discussing children. By the time respondents reached the age of 35, women were wanting the discussion after 7.2 months, while men’s timelines dropped to nine months.

Relationship length also factored into a couple’s approach to the children discussion. The longer a couple stayed together, the less likely they were to avoid the conversation. Only 5% of couples who had been together for six years or longer hadn’t yet asked the other about starting a family. That said, the stakes were relatively high even between romantic partners, as 17% of women and 15% of men said they’ve ended a relationship due to differing opinions on having children. This was more common in the U.S., however, where 24% of people said they had ended a relationship due to differing opinions on children, compared to just 7% of people in the UK.

Be Courteous When Asking About Kids

With this data, it’s easy to see that asking the wrong way can make someone uncomfortable or remind them of a painful infertility struggle. The data would suggest that asking about desires instead of natural abilities is a good place to start. It’s also less likely to be appropriate for you to ask a co-worker, an acquaintance, or someone you don’t know at all. When in doubt, express your sensitivity first or consider how important it is for you to know the answer.

Above all, educate yourself and take care of your health. Those were the two major intentions behind this study and everything we do at Superdrug Online Doctor. We are experts of men and women’s sexual health and well-being. Time and again, we have seen the importance of education and honest and open communication in our field. If you’d like to take the hassle out of visiting your doctor for quick questions or embarrassing appointments, we are here to help every day at any hour. To see how we can help your health, head to Superdrug Online Doctor today.

We conducted a survey of 1,005 people who have never had children and asked them questions about their opinions and experiences with receiving questions about having children.

Thirty-three per cent of respondents were single, 39% were in a relationship, 4% were engaged, 23% were married, and 1% were separated, divorced, or widowed.

Eighty-one per cent of respondents indicated their sexual orientation as straight or heterosexual, 13% as bisexual, 4% as gay or lesbian, and 2.3% as an option not listed by the study.

It is possible that with a greater sample size of certain demographics, we may have been able to gain better insights into their opinions and experiences. These results are based on self-report and are subject to issues such as exaggeration, attribution, and selective memory. No statistical testing was conducted and results are based on means alone and, as such, are presented for informational purposes.

It is our sincerest hope that this project and the data behind it support all genders in all of their journeys through reproductive health and any questions they may have about the experience. It is also our belief that one way to support these endeavours is to share the knowledge we have. If you’d like to share this project with someone you think may find it informative, just be sure to link back to this page so that others can explore the project in its entirety. Additionally, we kindly request that the information and images are used for noncommercial purposes only. If you have any questions, please contact [email protected].