Ghosting, flexing, catfish, low fade - what do they mean?

From ghosting to flexting, curving to catfishing, modern love entails plenty of slang. It’s not just linguistic innovation for its own sake: The digital age adds layers of complexity to dating that earlier generations never encountered. Sure, waiting for a date to call was painful in decades past. But to adequately describe behaviours like waiting two days to reply to a text, terms like “cricketing” are required. It’s a brave new world for romance, and if you don’t already know what “micro-cheating” means, you’re bound to find out quickly.

In this project, we surveyed hundreds of Europeans and Americans about the digital dating behaviours they’d experienced themselves – and which they’d done to others. Our findings present the most common misdeeds of digital dating, suggesting some slang terms are so popular because they describe events that occur quite often. How do your experiences with communication in contemporary romance compare to our results? Keep reading to find out. 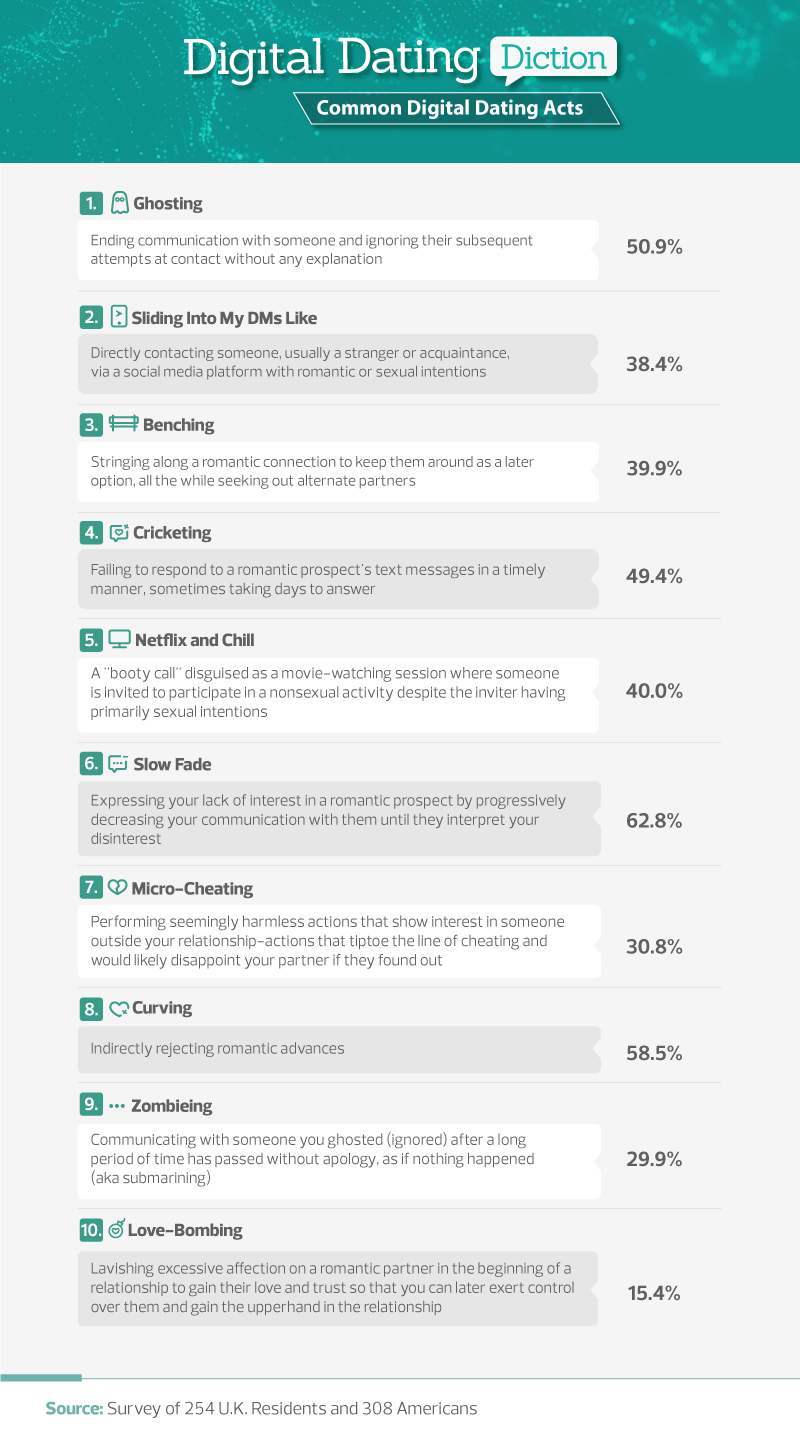 Ah, ghosting: Nearly 6 in 10 respondents reported someone had abruptly ended communication with them, and roughly half admitted to ghosting another person. In fact, ghosting is so common that some experts believe it will threaten the future of dating apps, causing widespread discontentment among earnest users. Respondents were even more likely to take a gradual approach to cutting off communication, with about 63 percent admitting to “slow fading” someone over time. Additionally, almost 59 percent admitted to curving someone by rejecting him or her indirectly. These behaviours have one advantage: They avoid the discomfort of a frank conversation.

With regard to some of the more deceptive dating behaviours, our respondents were far more likely to say they’d been victimised than to admit guilt themselves. Around 22 percent reported they had been catfished, for example, whereas just 9 percent admitted to catfishing someone themselves. Catfishing often goes further than misleading pictures: Scammers sometimes request money, and some have called for misrepresenting one’s self online to be criminalised. Kittenfishing, or embellishing the facts of one’s life in relatively minor ways, was even more common. Three in 10 individuals surveyed reported falling victim to kittenfishing before, and 1 in 5 said they’d done it themselves. 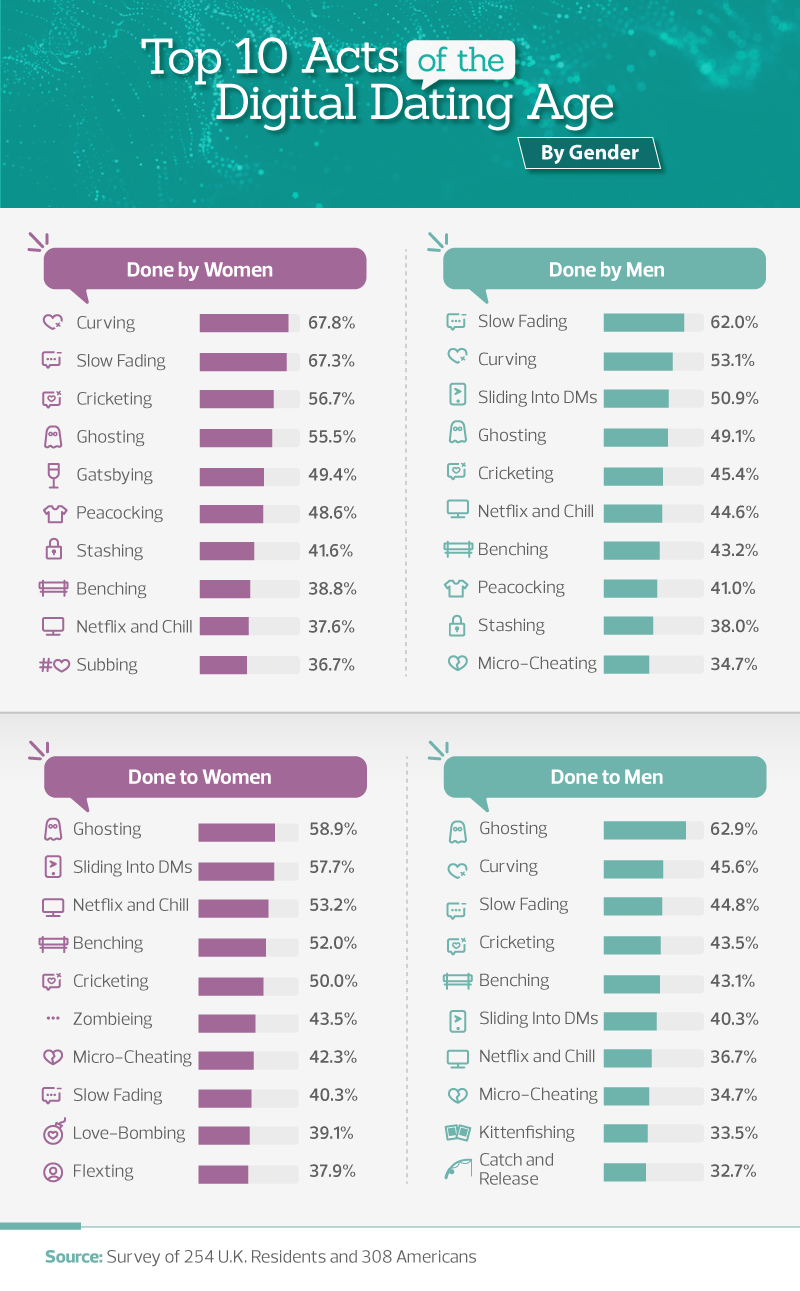 Do men and women experience (and enact) vastly different digital dating behaviours? More than two-thirds of women admitted to curving someone, and nearly as many had slow faded a love interest in the past. Conversely, men were slightly less likely to slow fade someone else and curved others far less often. Male respondents were dramatically more likely to slide in another person’s DMs, however. he recipients of these unsolicited messages however, often consider them off-putting or offensive, especially when their content is sexually explicit.

In terms of their treatment by others, men were slightly more likely than women to report getting ghosted but much more likely to say they’d been curved or slow faded. More than half of women reported receiving the “Netflix and chill” treatment, though – a much greater percentage than their male counterparts. Women also experienced “zombieing”, the act of resurfacing in a past love interest’s life after an extensive period of no contact, at significantly higher rates, a challenging phenomenon given all the forms of communication we utilise daily. You can block an ex’s number, but, depending on your privacy settings, he can still slide into your DMs uninvited.

Where Ghosting Goes Down 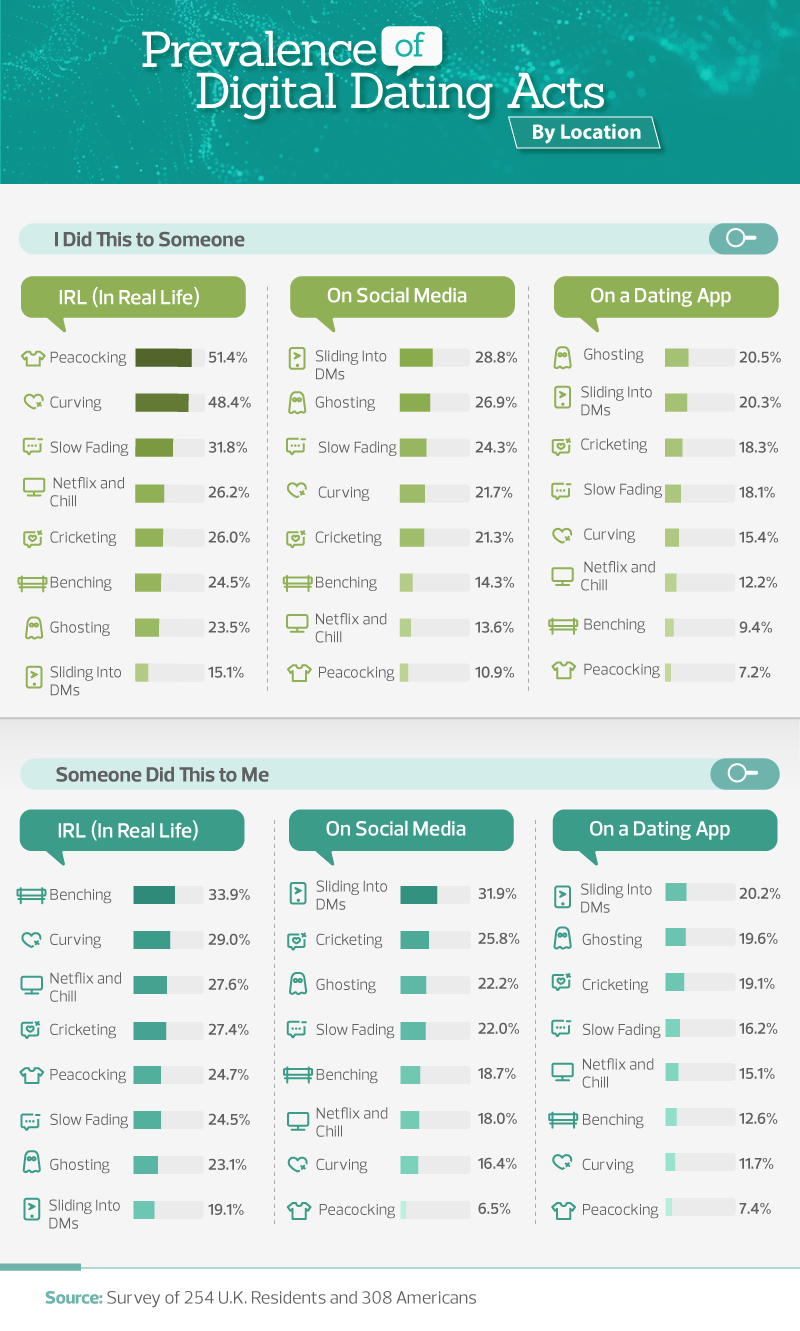 Clearly, some dating behaviours originate from a particular context (before the age of Instagram, there were no DMs to slide into). Still, our findings reveal a compelling pattern of behaviours crossing platforms, suggesting some tendencies may not vary much between apps. For example, sliding into one’s DMs, ghosting, and cricketing were the three behaviours that our respondents experienced most often on both social media and dating apps. Some users have actually coined a term to describe when dating app behaviours bleed over into social media: “Tindstagramming.” Facebook even has plans to roll out a dating feature of its own, unifying the two realms as never before.

Real life behaviours still differed significantly from the digital space. Peacocking was the move our respondents pulled most often in person, with more than half saying they’d acted or dressed in ways intended to attract another person. Curving was quite common in real life as well, both in terms of doing it to someone else and experiencing indirect rejection themselves. Benching, however, was the IRL behaviour our respondents experienced most frequently from others: Roughly a third of people had been subjected to that painful limbo.

Why We Do Them – and Despise Them 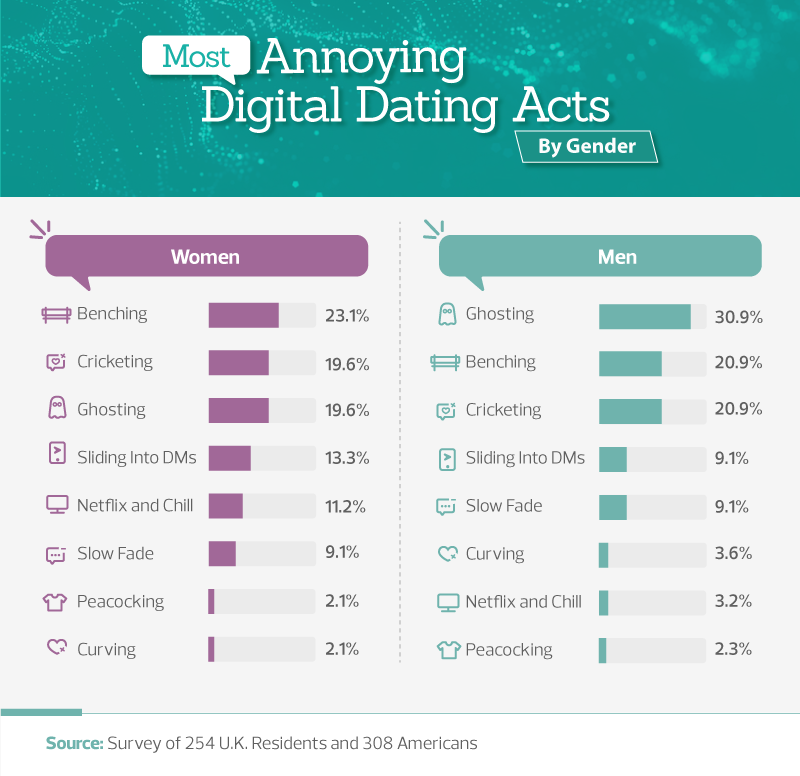 Which digital dating behaviours do men and women find most frustrating? Among men, ghosting provoked the most irritation, with nearly 31 percent of guys deeming this behaviour most annoying overall. By contrast, women were most likely to regard benching as the most obnoxious behaviour. Cricketing, or sporadic interactions separated by long periods of silence, ranked second for both men and women.

In the case of one behaviour, Netflix and chill, men and women diverged significantly. Whereas merely 3 percent of men regarded these thinly disguised hookup invitations as the most annoying digital dating behaviour, women were much more likely to despise it. 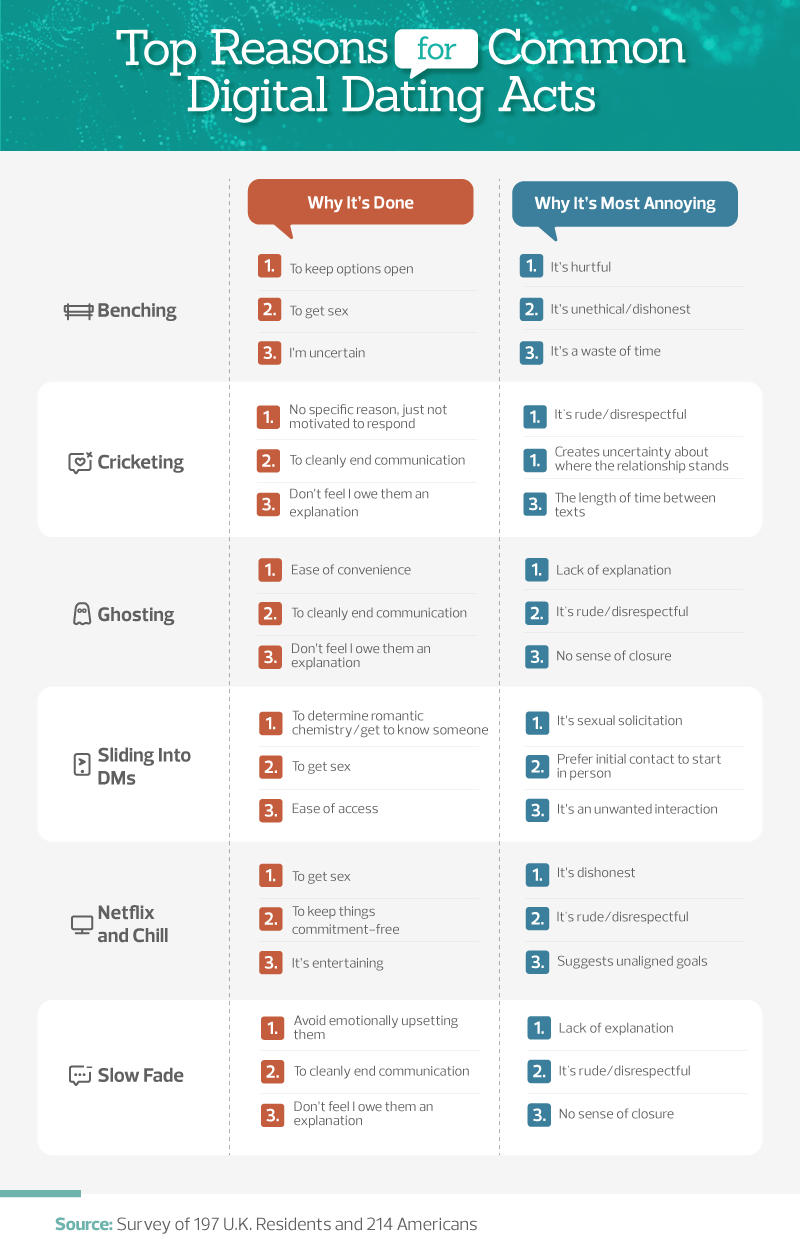 When we explored our respondents’ motives for engaging in each dating behaviour, some admitted their actions were largely driven by lust. For example, “to get sex” was among the top reasons for benching, Netflix and chill, and sliding into DMs. In other cases, people privileged efficiency over sensitivity: Those who ghosted others tended to regard it as convenient and a good way to make a clean break.

Yet, differences in etiquette expectations can result in hurt feelings, even when someone doesn’t necessarily intend to do harm. In the case of slow fade practitioners, for example, the top motive was to avoid upsetting the person by letting them down gently. But those who found the practice annoying were irked by this very thing; they apparently would have preferred direct honesty instead.

Similarly, many ghosters felt they didn’t owe an explanation before cutting off communication. But for those who found ghosting annoying, this lack of an explanation was frequently the most frustrating part. These results suggest that some of the pain of digital dating is attributable to misaligned communication preferences, rather than selfishness or spite. Still, those affected by them often discerned a lack of character: In many cases, they deemed these behaviours disrespectful, rude, or dishonest. 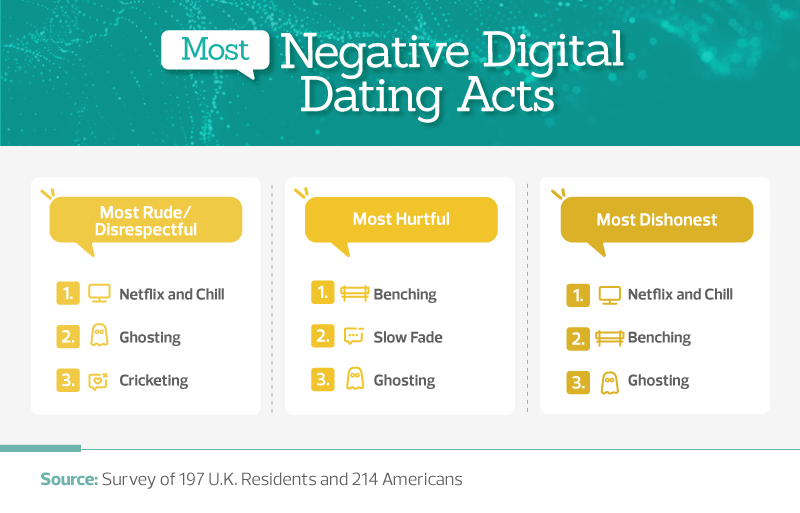 When do dating acts qualify as morally wrong rather than merely annoying? Interestingly, Netflix and chill tactics were regarded as the most rude or disrespectful behaviours and the most dishonest. Experts have pointed out that taking the euphemism literally could cause awkward moments: If people expect to simply hang out rather than hook up, they could leave feeling deceived, disrespected or worse.

Some of the most hurtful behaviours, however, seemed to entail people not being upfront enough about their intentions. Both benching and the slow fade approach kept someone else in an agonising state of ambiguity. Indeed, dating gurus suggest that when it’s time tell another person it’s over, being clear is best for all involved. 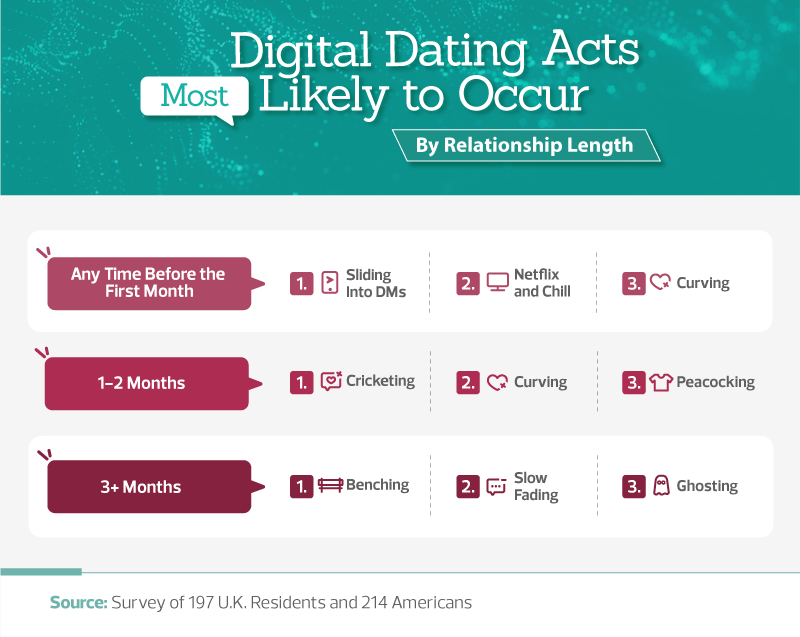 Of course, being ghosted after a single date likely stings much less than getting cut off by someone you’ve dated for months. Unfortunately, painful tactics like benching, slow fading, and ghosting were the dating acts most likely to occur in relationships lasting three or more months. Dating for this period might prompt conversations about exclusivity, a prospect that could prompt some partners to resort to these tactics of retreat.

In relationships lasting one to two months, cricketing, curving, and peacocking were most common. These behaviours suggest an ongoing courtship at this stage – or, in the case of curving, an attempt to cut it off tactfully. For relationships of less than a month, however, more direct appeals for sex were most frequent, including sliding into DMs and Netflix and chill.

Our findings suggest that although inconsiderate behaviours occur quite frequently in digital dating, their emotional impacts are still quite significant. The result may be a dramatic decline in dating expectations and enthusiasm: When we anticipate being hurt or ignored, vulnerability is additionally challenging. Daunting as modern romance may seem, however, we hope no amount of disappointment will discourage people from earnestly pursuing love. It’s easy to get jaded, but there’s also a reason for optimism: There are millions of individuals out there who find the games of digital dating just as exhausting as you do.

Whether you’re casually dating or in a committed relationship, self-care should be a top priority. Often, however, getting the help we need conflicts with the rapid pace of modern life or inconvenient trips to the doctor. Superdrug Online Doctor is the perfect alternative to the drawbacks of traditional doctor appointments, offering convenience and discretion through a digital platform. With online consultations and prescriptions collected in store or delivered right to your door, taking care of yourself is as simple as it should be.

We conducted a two-part survey, part A and part B. For part A, we surveyed 562 people (254 U.K. residents and 308 Americans). We asked them how frequently they experienced or had committed various digital dating acts from a list of about 40 terms. Participants were excluded if they had not actively dated in the last five years. We then took the top five results for both acts participants had committed or experienced, which resulted in eight unique acts from the digital dating age. We then ran a second survey where we asked 411 people (197 U.K. residents and 214 Americans) questions about these more common digital dating acts. Participants from part B also had to have actively dated in the last five years.

If you’d like to use our images or information on your own site or social media, simply attribute us appropriately by providing a link back to this page. For press enquiries or other questions regarding this content, please contact our digital media team at [email protected].