We all love the excitement of dating someone new, but when the time comes to get serious with one person and one person only – things can get a little complicated. Dating as an adult isn’t like when you were younger and you simply talked on the phone or sat together at lunch, well, for most of us anyway. Now, relationships can mean marriage, babies and lifelong commitments.

This huge milestone can actually raise a lot of questions for both parties and if not handled correctly, could cause stress and anxiety – especially when it’s not yet “official.”

Given all the complexities of commitment, how do you know when the time is right to take the plunge? And how do you announce your relationship status to each other, let alone others?

To find a general consensus on these topics and more, we surveyed over 1,000 Europeans and Americans who had been in at least one romantic relationship and discovered some interesting trends when making the move  from “just friends” to an “official couple”.

As a child, you might have heard the saying, “First comes love, then comes marriage, then comes a baby in the baby carriage.” However, as you will now know, there are many unique paths to love, as evidenced in our survey results. 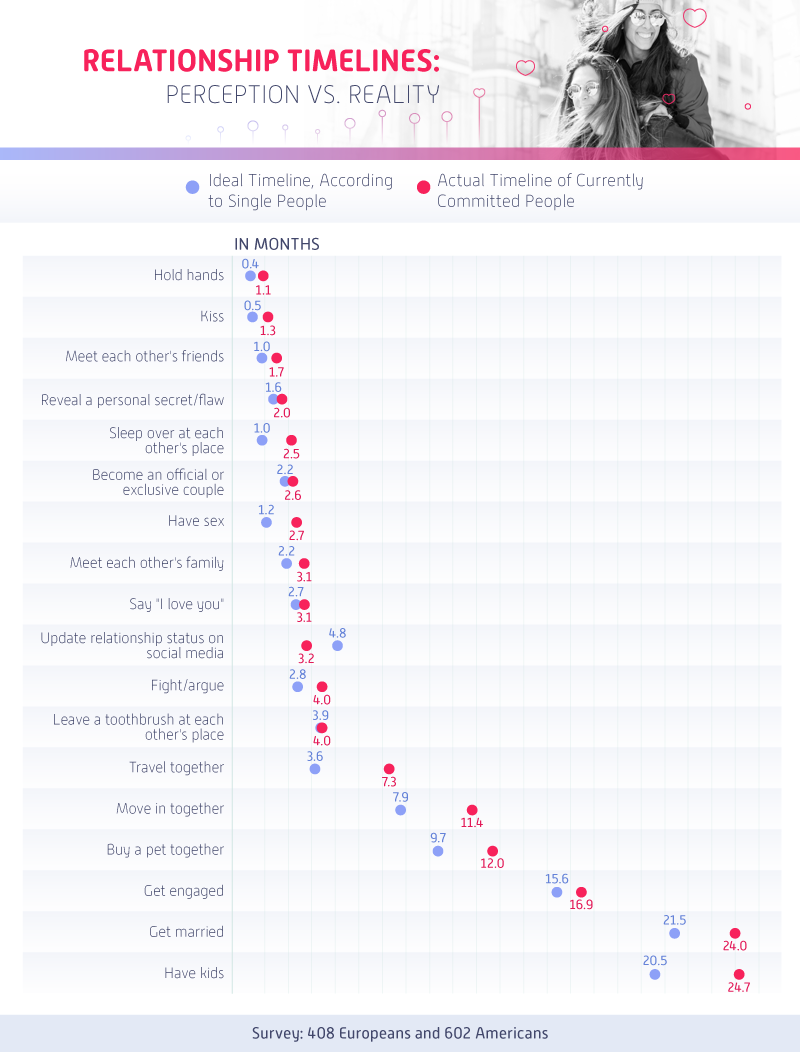 On average, single people surveyed agreed that before making any commitments, you should spend the night at the other person’s place, have sex, meet each other’s friends, and reveal a personal flaw or secret about yourself. These are all steps that could help you really get to know each other, which is pretty important before deciding whether you want to become exclusive.

This being said, we discovered some interesting differences between single people’s ideal relationship timelines and partners’ actual timelines. On average, single people thought it was important to have sex before making their relationship official; however, most of those in a relationship actually waited until shortly afterwards. Committed people also waited longer after making it official before meeting each other’s family and saying “I love you.”

On average, single people thought they should wait over two months before becoming official. Specifically, single women believed it was appropriate to wait for 2.6 months before entering an exclusive relationship, and single Gen Xers thought they should wait for 2.4 months. Millennials, on the other hand, were OK with becoming exclusive just before the two-month mark. Millennials may be known for just going for it, as they are much more likely to jump into a relationship quickly. 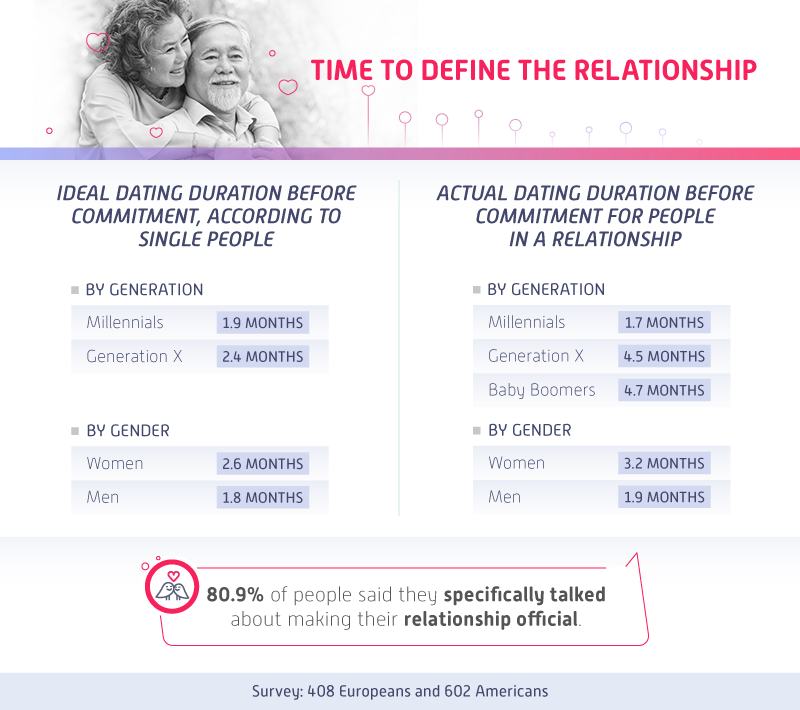 Even though single people were happy to make it official at around two months, they didn’t think they should flaunt this new relationship on social media for another 2.6 months after that. This is surprising considering this generation are assumed to  post everything they do on social media, with many people around the world on these platforms.

Eighty percent of people in a relationship specifically talked with their current partner about becoming exclusive. Those conversations are important because it allows both parties to know, for certain, the parameters or boundaries of the relationship. Whether you’re in an open or monogamous relationship, there are many ways to have “the talk,” so choose an environment in which your partner will feel the most comfortable and where dialogue can properly go ahead.

However, if 80% discussed it first, this means the other 20% may have just assumed the relationship was already committed. This could be because two people are aligned with each other so don’t necessarily need words to invoke their devotion. Opening up and confiding in each other, supporting each other’s endeavours and being comfortable and satisfied with intimacy (physical or emotional) are all important in a strong, healthy relationship.

Before you mutually decide to be in an exclusive relationship, you’re technically not tied to that person – right? This can be unclear when you’re dating, especially when you haven’t had THE conversation.

But is it OK? It may depend on when you grew up. 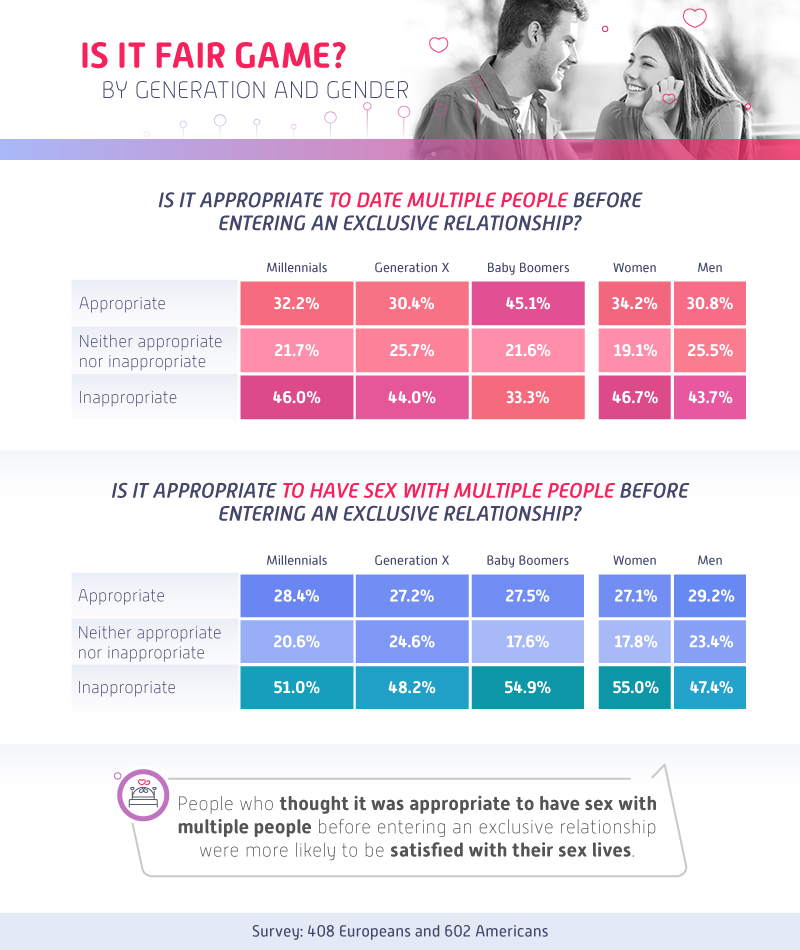 Baby boomers grew up during some pretty groundbreaking moments in dating history. During the “free love” days of the 1960s, many young people stopped following dating rules but baby boomers came of age after it became much more acceptable for young couples to go “steady” and publicly announce their courtships.

But this doesn’t mean baby boomers carried that mindset with them as they got older. While a high percentage of baby boomers thought it was appropriate to date multiple people before entering an exclusive relationship, the majority thought the opposite when it came to having sex.

Similarly, over half of millennials felt it wasn’t right to sleep with multiple people, even before becoming exclusive. This could be because many millennials are in romantic relationships with people they knew before dating. Having an established relationship could increase mutual respect and the awareness of millennials not wanting to hurt the other person’s feelings.

Although some people are uncomfortable with this situation, it might not be in your best interest to write it off completely. Those who thought it was appropriate to sleep with multiple people before entering an exclusive relationship were more likely to be satisfied with their sex life once in a relationship.

When to Have "The Talk" 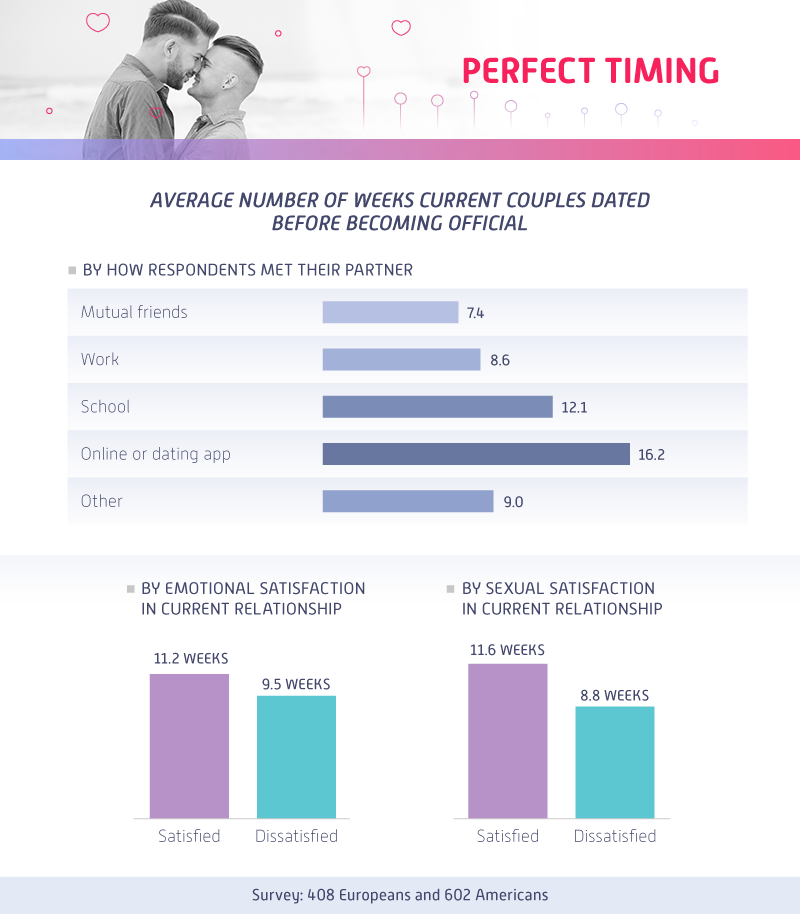 So when is it appropriate to go exclusive with someone you’re dating? According to our study, those who met online or on a dating app waited the longest – about four months after dating. Since they typically start off as strangers, couples who meet online may wait until they know each other well before becoming exclusive.

People who were introduced through mutual friends waited the shortest amount of time – a little less than two months – before becoming official. Dating someone within your friend group can definitely fast track your relationship, as you’re most likely participating in group activities and doing things that help you get to know each other more quickly.

No two relationships are alike, so how and when you decide it’s the right time to have the exclusive talk is ultimately up to each couple. What works for one couple may not work for another, so don’t be intimidated, discouraged or feel rushed due to someone else’s timeline.

Emotional and sexual satisfaction can also be deciding factors when making your relationship official. It may take time to be totally comfortable with each other sexually, and it could deter you from wanting to be exclusive in case it just doesn’t work out. Sexual satisfaction is associated with the stability of a relationship, increasing commitment and affecting emotional connection as well. 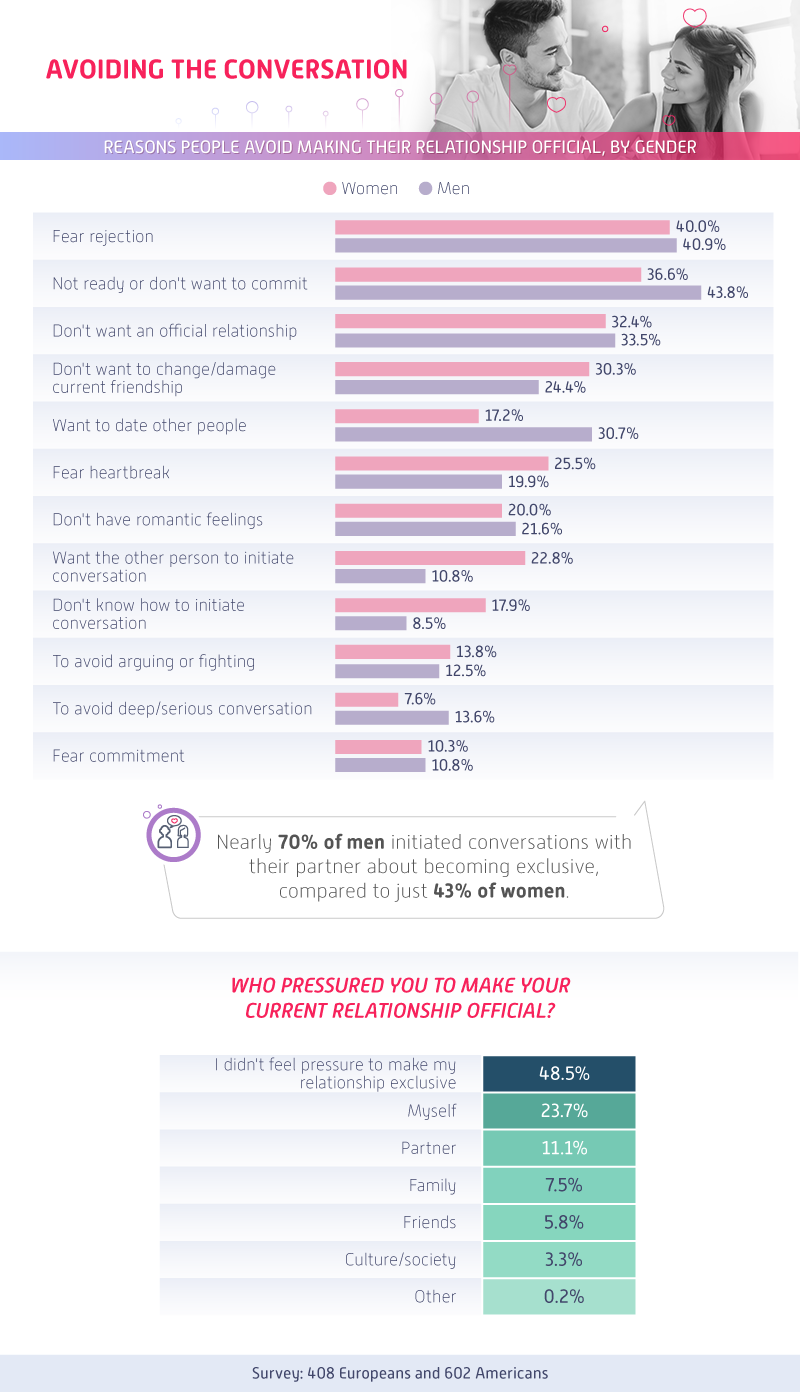 As with any sensitive or difficult conversation, it can be hard to discuss making a relationship exclusive. We found that both men and women had varying reasons for avoiding or delaying this type of relationship talk.

For women, the main reason for putting off this conversation was a fear of rejection. They were also more likely than men to wait because they wanted their partner to be the one to bring it up.

According to our data, men were more likely than women to initiate becoming exclusive. Still, women are taking control of their dating lives and their relationship desires.

Putting It All on the Table 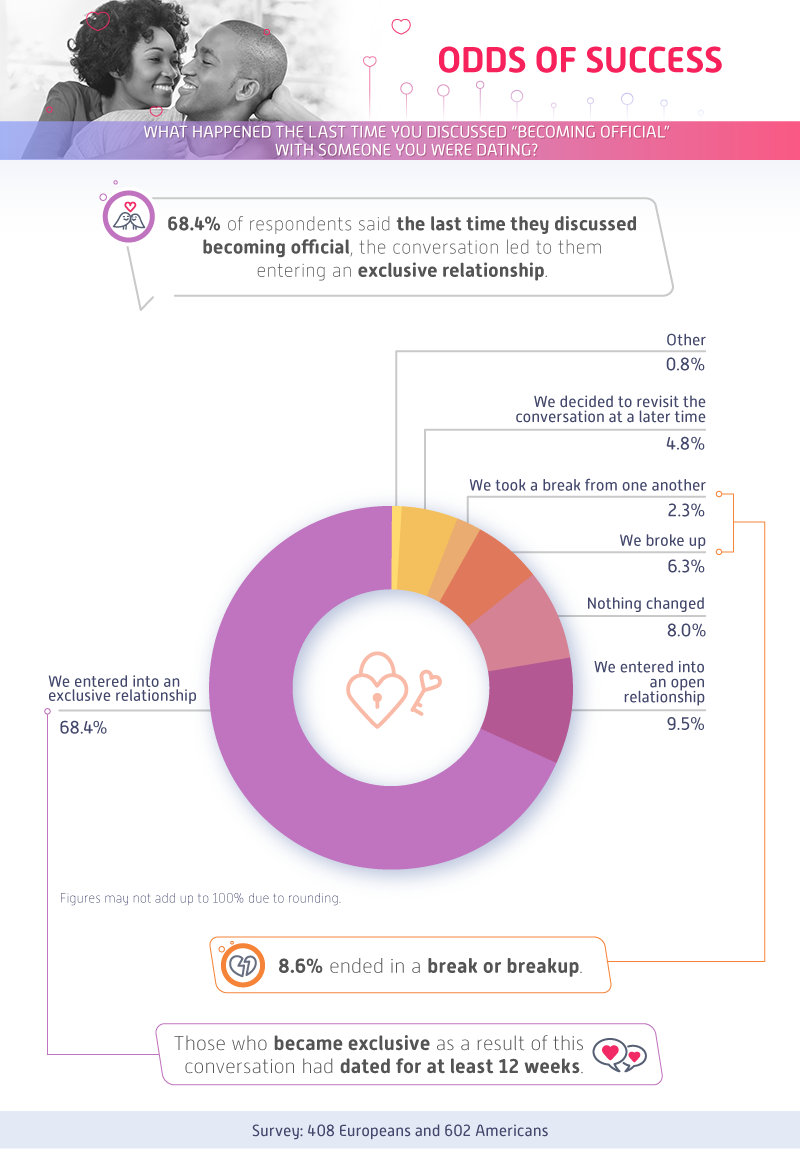 If you’re in a position where you feel the conversation is needed, you’ve probably invested enough time  into the relationship to understand if you want to take it to the next level. Even though having the conversation may make you feel anxious or nervous, it’s likely that as long as the two of you are aligned, you’ll have a positive outcome.

It’s important that the conversation is approached casually and comfortably. Don’t come to your partner in a way that could be considered overly assertive or during an inconvenient or stressful time. After all, relationships succeed when there is balance, communication and compromise.

It’s no secret that dating can be messy and confusing. But as long as you’re open and honest, you have a much better chance of getting what you want out of a relationship. Choose to talk about relationship exclusivity when the time is right and when you are both likely to be comfortable with taking the next step.

Regardless of whether you’ve had “the talk,” let Superdrug Online Doctor strengthen your intimate bond. We have a range of products to greatly improve your sexual function and health – as well as something for every stage of your life and relationships.

For this study, we surveyed European and American adults using Amazon’s Mechanical Turk and Clickworker, respectively.

There were 408 Europeans and 602 Americans. The Europeans were from the following countries:

52.0% of participants were men, 47.6% were women and fewer than 1% were nonbinary or chose not to identify.

In some visualisations, we did show “neutral” answers.

We based this study entirely on self-reported data. It is not weighted nor statistically tested and is completely exploratory.

Want to share these relationship findings with some of your friends and colleagues? We hope you do – maybe it’ll encourage someone to take a leap of faith and make it official. Just please remember only to use our work for noncommercial purposes and link back to the original study to give credit where credit is due. Any questions? Reach out to [email protected]