Some sexual turn-ons can seem relatively run of the mill. Maybe light role-play, a little bit of dirty talk while you’re rolling around in the sheets, or just a soft touch before things get too hot and heavy.

What about watching your partner weed the garden? Watching someone roll their sleeves up? Driving to the supermarket?

As it happens, some sexually stimulating behaviours can seem to have absolutely nothing to do with sex. For a closer look at some of these surprisingly arousing actions, we surveyed over 1,000 Britons and Americans about the possibly unusual things that turn them on. Want to know how many people are turned on by watching someone cook, while they’re at work, or even just by a stranger smiling at them on the street? Read on to see what we uncovered.

Getting Hot and Bothered

Without realising where your sexual turn-ons are coming from, it can be easy to feel ashamed by some of the quirky things that get you hot under the collar. Instead, experts suggest it’s important to understand where sexual desire comes from and make some effort to normalise our arousal pallets (as long as those turn-ons are consensual, legal, and harm-free). 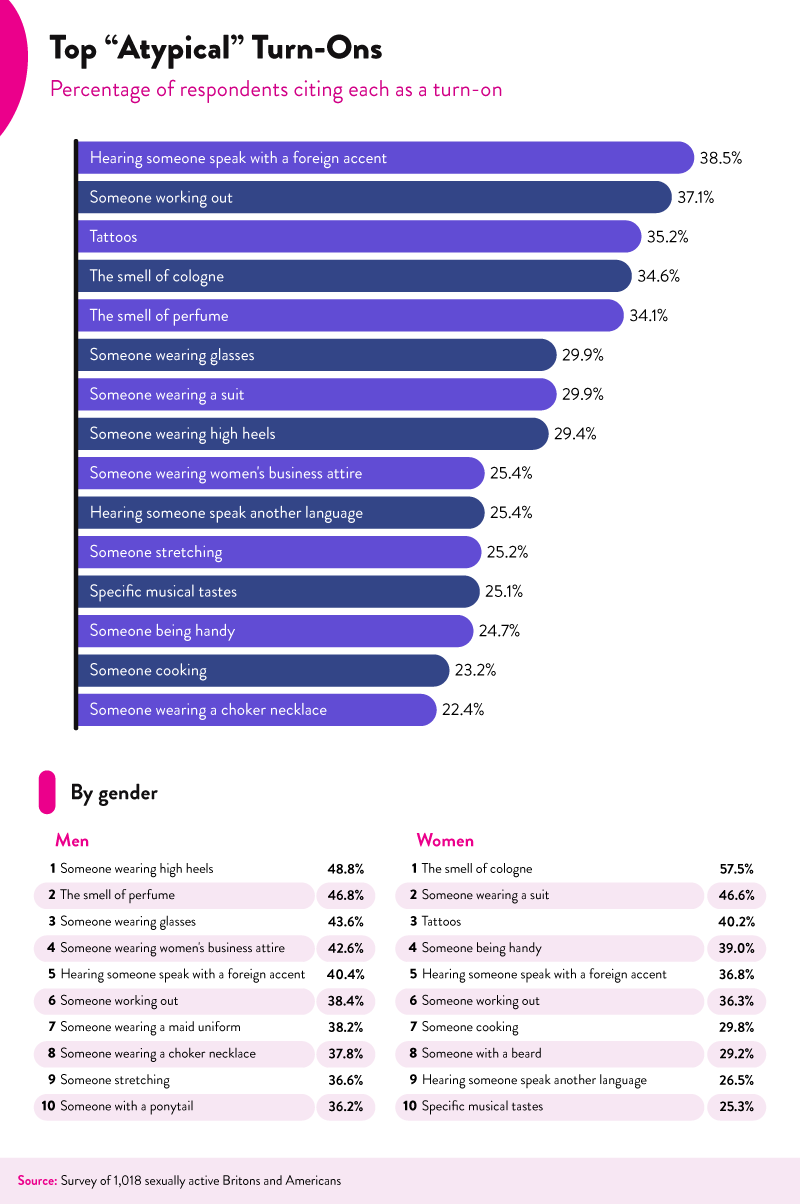 According to the more than 1,000 people we surveyed, the most common “atypical” turn-on was hearing someone speak with a foreign accent (40%), followed by watching someone work out (38%), a person with tattoos (36%), and the smell of cologne (34%).

At some point in any relationship, there may come a time when you need to make a conscious effort to keep things feeling new and exciting in the bedroom. While communication is always key to understanding what gets one partner worked up, couples shouldn’t be afraid to spice things up where they can. Wearing sexy undergarments, introducing toys into your repertoire, even considering places for a romp that aren’t the bedroom are all possible ways to liven up your sex life. 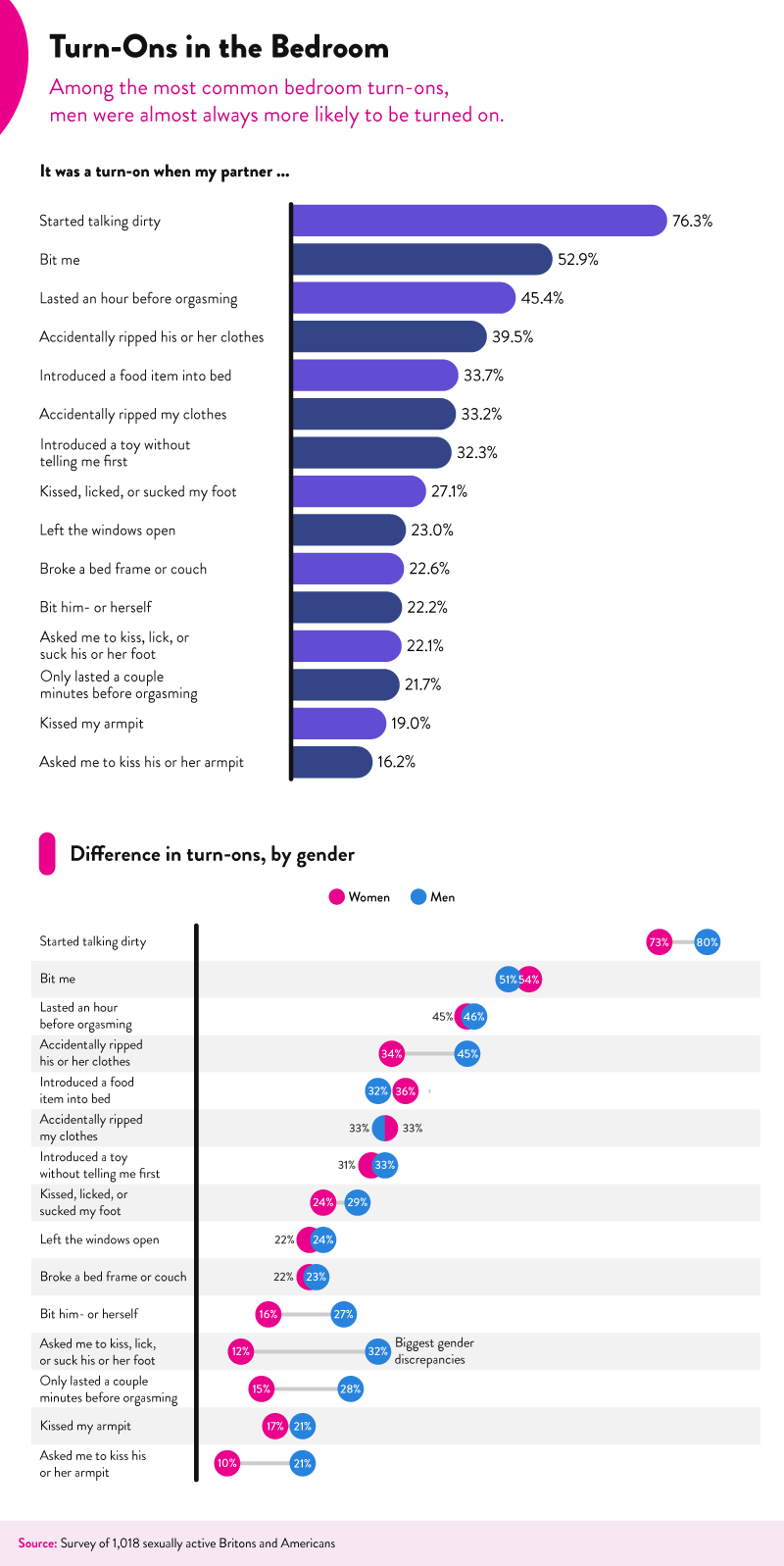 When asked about their most common turn-ons in the bedroom, a majority of people (76%) agreed on the most arousing behaviour: dirty talk. Even if you don’t know how to talk dirt like an absolute pro, there are some simple tricks  to get things going, such as starting with a risqué question. As we found, talking dirty with each other was slightly more arousing to men (79%) than women (72%).

Other notable turn-ons included biting (52%), lasting an hour before orgasming (46%), a partner accidentally ripping their clothes (39%), and bringing an edible into the bed (34%). Across the spectrum of intimate behaviours we surveyed people on, men were more aroused by every action, with the exception of biting and food in bed. We found the biggest gender discrepancy in foot-to-mouth play, which men showed 20 percentage points more interest in.

While some more unusual behaviours or actions may be considered turn-ons, we found some other bedroom proclivities were deal breakers for a relationship instead. The most common mood killers included being called by the wrong name (52%) and loud or pungent gas (35% and 34%, respectively). 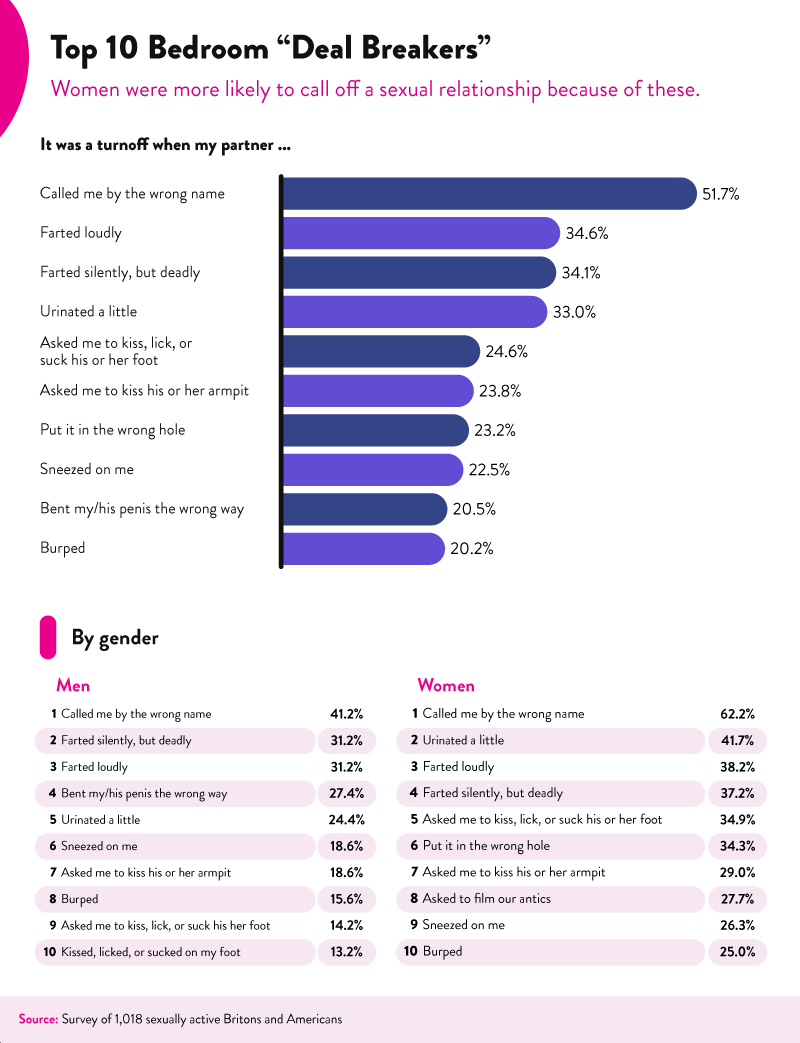 Again, for men and women, the idea of what might be crossing the line as a complete turnoff was somewhat different. Both identified being called by the wrong name as the most common deal breaker, but women (62.2%) were more put off on the idea than men (41.2%). Though, women were 19 percentage points more likely to list peeing a little during a sexual encounter as a final straw. Among the biggest gender gaps in what constituted a deal breaker was foot play, where 35% of women identified a partner asking them to kiss, lick, or suck on their foot as going too far, compared to just 14% of men who drew the line here.

For some couples, spicing things up between the sheets means taking intimate activities out of the bedroom. While it might be unusual by some standards, getting aroused in these unfamiliar locations was more common than you might expect.

Men (59%) were far more likely to admit to getting turned-on while at work compared to women (39%) and nearly every other location we surveyed people about. While men were more likely to report having been aroused while driving, working out, shopping, or even on public transit, women (23%) were more commonly turned on than men (21%) while reading a nonsexual book.

When the Mood Strikes

Whether you want to call them strange or unique, what’s clear is that you can’t always control when the mood hits you. Sexual attraction doesn’t always have to be about sex, and some random encounters can still be excellent fantasy fuel in the right situation. 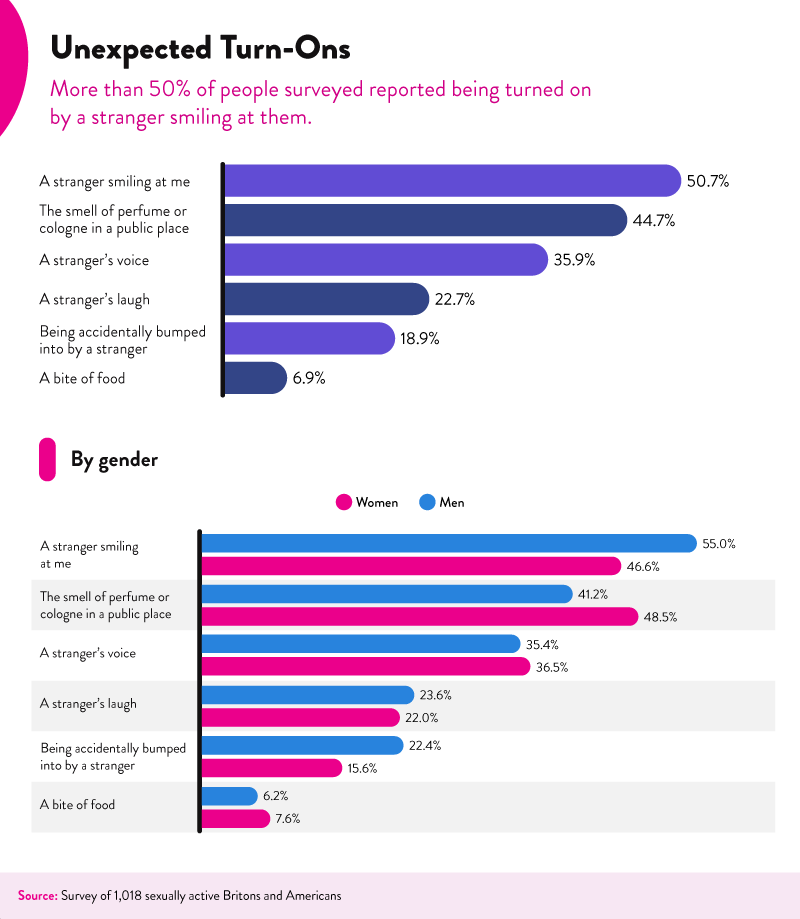 More than half of people polled, including 55% of men and 47% of men, admitted to being turned on unexpectedly by a stranger smiling at them. Similarly, 44% of people acknowledged the smell of perfume or cologne as having the potential to be sexually arousing, in addition to the sound of a stranger’s voice (37%). The link between sex and smell isn’t really that surprising, and science supports that certain scents (including lavender or pumpkin pie) can trigger a sort of pheromone leading to unanticipated arousal.

While men were more likely to identify being turned on by these seemingly random interactions, women reported a stranger’s laugh (38%) and certain bites of food (8%) as more enticing compared to men.

There’s no one specific way for people to have sex, and there are no clearly definite actions or behaviours that can be sexually enticing to either men or women. While men were typically more likely to find these atypical scenarios or locations a turn-on, we found things as ubiquitous as hearing someone talk with a foreign accent, dirty talk between partners, or even a stranger smiling on the street were very popular behaviours that got people feeling a bit randy.

At Superdrug Online Doctor, we take the hassle out of having to visit your doctor for common health concerns, including erectile dysfunction, contraception, vaginal dryness, and PrEP, we make it easy to get prescriptions for the medication you need, quickly and discreetly. And once you’ve placed an order with us, getting a refill is even easier with just a few quick clicks. We even offer antibody tests for COVID-19. Visit us online at Superdrug Online Doctor today to learn more!

We surveyed 1,018 sexually active Britons and Americans via Amazon Mechanical Turk and Clickworker. The mean age was 36.8 with a standard deviation of 11.2 years. 513 of our respondents identified as female, and 500 identified as male. Five of them chose not to answer.

The data we are presenting rely on self report. There are many issues with self-reported data. These issues include, but are not limited to, the following: selective memory, telescoping, attribution, and exaggeration.

Don’t be ashamed of what you’re attracted to! If you find the information in this study interesting, go ahead and share it, as long as it’s for noncommercial use and you link back to this page to provide proper credit.