The COVID-19 pandemic has changed virtually every way that people interact with one another. After nearly 12 months of social distancing and mandated lockdowns, some couples who may have only just begun dating have spent the last year living together in order to stay together while following stay-at-home orders.

For others, the pandemic has been a lost year – devoid of the spark of casual in-person dating and forcing connections into the digital world. At a time when genuine human connections may be more important than ever, online dating and virtual interactions seem to be today’s singles’ last hope for finding a connection in a world of self-isolation.

So how have singles been staying connected in the year of celibacy that was 2020? To find out, we surveyed over 1,100 singles about how they’re navigating love during the pandemic. Read on as we explore when people think they’ll be able to date in person again; which dating apps they’re using in the meantime; how they’re approaching sex during the pandemic; and how those changes have affected their sex drive.

Love in the Time of COVID-19 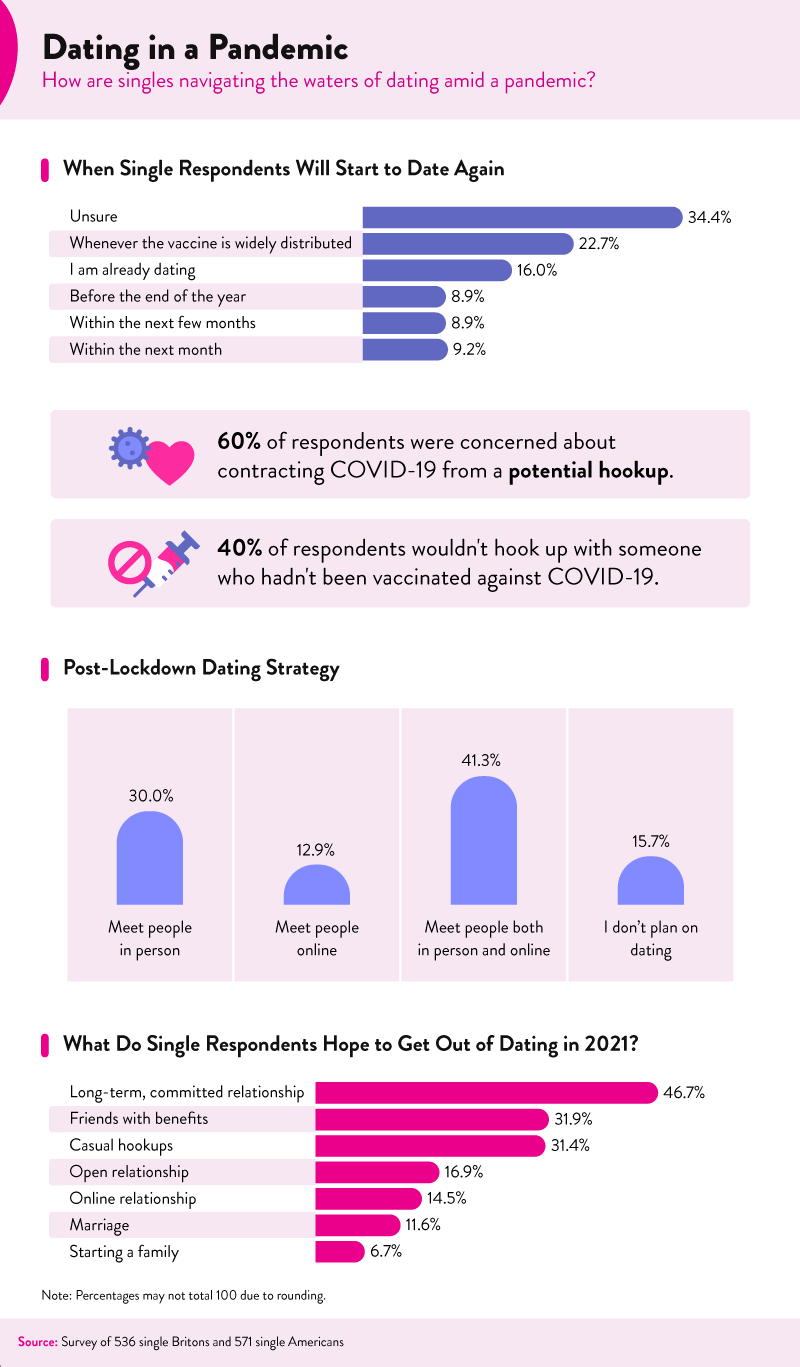 When it comes to conventional dating, over 34% of people were still unsure when they’d be able to date again, and another 23% said they’re waiting until the vaccine has been widely distributed. Just 16% of people said they were already dating during the pandemic, though almost 9% were hoping to date again before the end of the year, and another 9% expected to be back in the dating game within a few months. While people wait for lockdown restrictions to lift, 60% of the surveyed singles admitted they were concerned about contracting COVID-19 from hooking up with someone, and 40% said they wouldn’t hook up with someone who wasn’t vaccinated yet.

So what do they have planned for life post-lockdown? Thirty per cent of people expected to start dating in person again, while just under 13% expected to maintain their online dating presence. Most commonly, 41% of respondents said they anticipate some combination of both online and in-person dating. Even though they might be single now, close to half of people surveyed (46.7%) said they hope to be in a long-term committed relationship by the end of 2021. Not everyone was looking for something serious, though. Forty-two per cent of respondents wanted to focus on themselves in 2021, while 32% wanted to establish a friends with benefits relationship, and 31% wanted to pursue casual hookups. 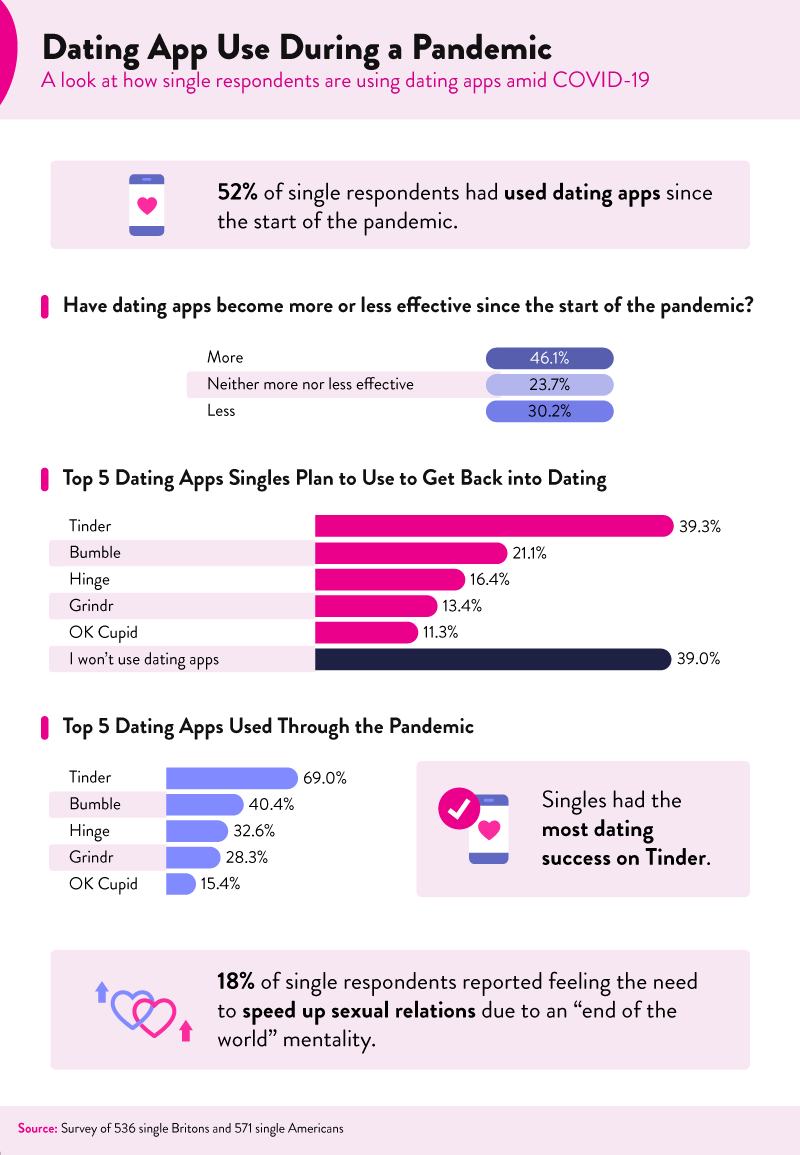 Thinking forward to better days, 39% of people said they wouldn’t use dating apps to get back into the dating scene, but others had a personal preference when it came to which apps to use to woo potential partners. Slightly over 39% of people were planning on using Tinder, followed by Bumble (21.1%), Hinge (16.4%), and Grindr (13.4%).

When it came to navigating the art of dating during the pandemic, 69% of people said they had relied on Tinder during lockdown, compared to 40% who preferred Bumble and nearly 33% who used Hinge. Tinder was the most used dating app – and the most successful. Singles reported having the best luck on Tinder for dating during COVID-19, compared to other popular dating apps like Bumble and Hinge.

Finding Intimacy During the Pandemic

The core safety component of preventing the spread of COVID-19 requires maintaining a safe as possible distance from as many people outside of your living and work arrangements. By nature, lockdown and social distancing have made the basic elements of romance difficult and that includes physical intimacy. Forty per cent of people polled said they’re less satisfied with their love life since the pandemic began, and just 23% of singles were satisfied with the amount of sex they’re having during COVID-19. In contrast, 75% of singles admitted they wished they were having more sex during the pandemic. 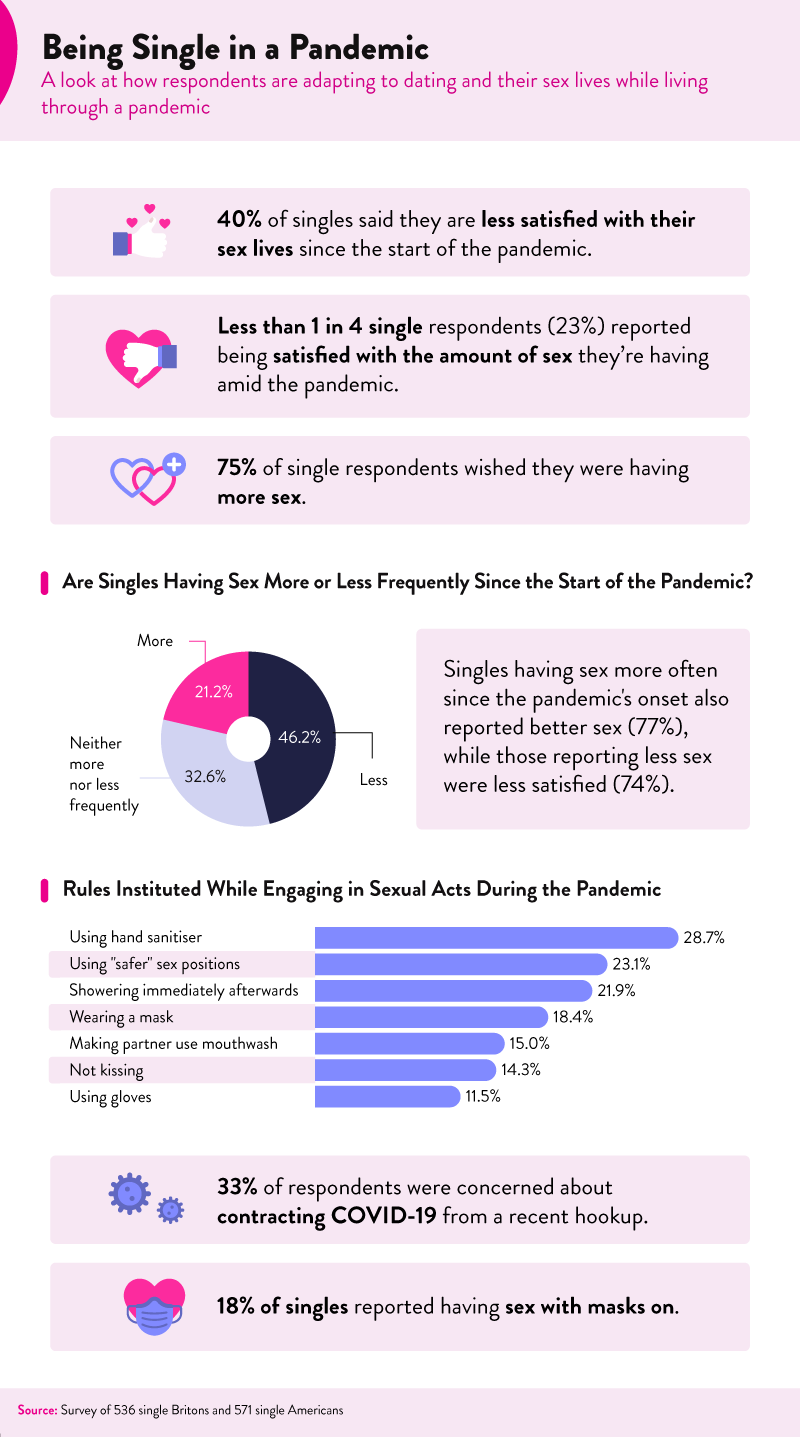 For those attempting sex and intimacy during the pandemic, singles told us about the rules they implemented to stay safe and healthy. Twenty-nine per cent of people reported using hand sanitiser while engaging in sexual acts, and 23% of people said they preferred “safer” sex positions. Another 22% of people said they showered immediately after getting intimate, more than 18% of singles chose to wear a mask, and 15% requested their partner use mouthwash. Despite these precautions, 33% of people polled said they were concerned about contracting COVID-19 from a recent hookup. 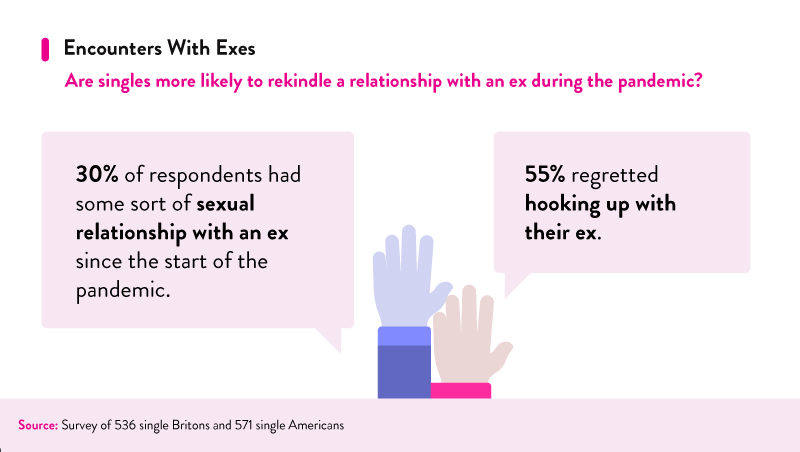 Seventy-nine per cent of singles said they found it difficult to date during the pandemic, and 62% said they had to slow down their dating habits to accommodate the rules of lockdown and quarantine.

Staying celibate during the pandemic might not be easy, but 39% of singles said dating was just too difficult, nearly 36% of people were concerned about protecting their loved ones from COVID-19, and almost 33% of people said they simply weren’t interested in dating. In fact, 55% of singles acknowledged being celibate during the COVID-19 pandemic by choice. Pandemic-related mental health issues (50.3%) were the most common reason for a decreased libido during COVID-19, followed by a change in self-care habits (34.2%), pressure from being unemployed (24.9%), and personally becoming ill with COVID-19 (10.4%).

Maintaining deep, personal connections with people you can’t see or touch on a regular basis can be difficult. Establishing new romances during the COVID-19 pandemic can be virtually impossible, particularly when the only safe options for meeting new people involve dating apps and digital communications.

Even if you’re feeling out of practice, Superdrug Online Doctor will help take all of the hassle out of visiting your doctor for common issues and things you might want to keep to yourself. With our online health services, you can have skin conditions diagnosed, treat hair loss, or even start your mental health journey with MindCare. With Superdrug Online Doctor, you can choose your preferred medication, get it prescribed by one of our doctors, and have it delivered right to your front door.

We collected results from 1,107 singles in the UK and U.S. using bespoke survey platforms. Of the 1,107 people surveyed, 45% were female, 54% were male, and less than 1% identified as nonbinary. Sixty per cent of respondents identified as heterosexual, 17% were homosexual, 17% were bisexual, 2% were pansexual, and 4% chose not to disclose their sexuality. The average age of respondents was 31 years old. An attention-check question was used to identify and disqualify respondents who failed to read questions in their entirety.

The main limitation of this study is the reliance on self-report, which is faced with myriad issues, like attribution, exaggeration, telescoping, and recency bias. An attempt was made to reduce bias throughout the questionnaire.

Are your readers still trying to establish intimacy during the COVID-19 pandemic? Share the results of our survey for any noncommercial use with the inclusion of a link back to this page in your report as credit to our contributors for their hard work.